We are here in Nigeria!  A new parallel is added to our list.  The trip here was long, but mostly uneventful.  Flying at US Government expense can be complicated.  They have a contract with various carriers for various routes.  If you want to deviate from that carrier/route, you pay the difference.  Delta has the contract for Washington DC to Lagos.  Unfortunately, Delta wouldn’t allow us to bring our dog with us on that flight, which meant that DyAnna had to fly on a different airline with her.  The kids and I flew to Atlanta and then direct to Lagos.  Dy had to go via Frankfurt.  Shockingly, despite the involvement of 3 continents and 2 airlines, we all got in as scheduled, about 15 minutes apart.

For the kids and I, the flight was long, but mostly uneventful.  We had reserved extended-economy seats for 4 of us (I could only get 4), with a 5th seat right behind one of them.  The seats were scattered about the extended-economy section, and I hoped to be able to consolidate them when we were at the gate.  No dice unfortunately.  I deposited each of the older kids in one of the seats as we went, and I was planning to sit in the last extended economy seat, with our youngest right behind me.  He took 1 look at that seat, with a man he didn’t know sitting next to it, and he broke into tears.  He made quite a scene, I tried to explain to him that I would be right in front, but he (very loudly) insisted, “Dad, it’s not safe!”  The man who was seated next to him very kindly offered to trade me his standard economy seat for my extended economy seat, and the day was saved.  I consoled myself through a 12 hour flight with cramped legroom, as I looked ahead at him and at my other kids being able to stretch out, with the glad feeling that at least I can make my little boy feel safe. 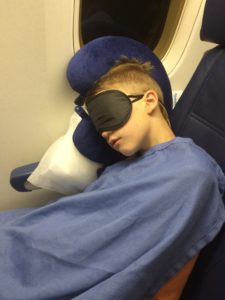 Dy’s flight, however, was a little more exciting.  Here is how she put it:

On my flight from Frankfurt to Lagos a 12 year old boy had some kind of medical event. As I was helping the flight attendant get medical vitals I ended up in a shoving match with a preacher who decided the boy needed an exorcism. He kept ripping the glucometer I was attempting to take his blood sugar with out of my hand and making me drip blood everywhere. I was not having it! The flight attendants got him subdued. A doctor joined me from first class and we finished our assessment and taking his vitals. The boy ended up being fine. Medical issues yet to be determined???After about 15 minutes of behavior which seemed like a seizure he fell asleep and slept the rest of the flight. He was autistic which complicated the diagnosis as well as his mother not speaking English. Word got out on the plane that I was a midwife and three different mothers brought their infants to me to hold so they could use the restroom in peace. 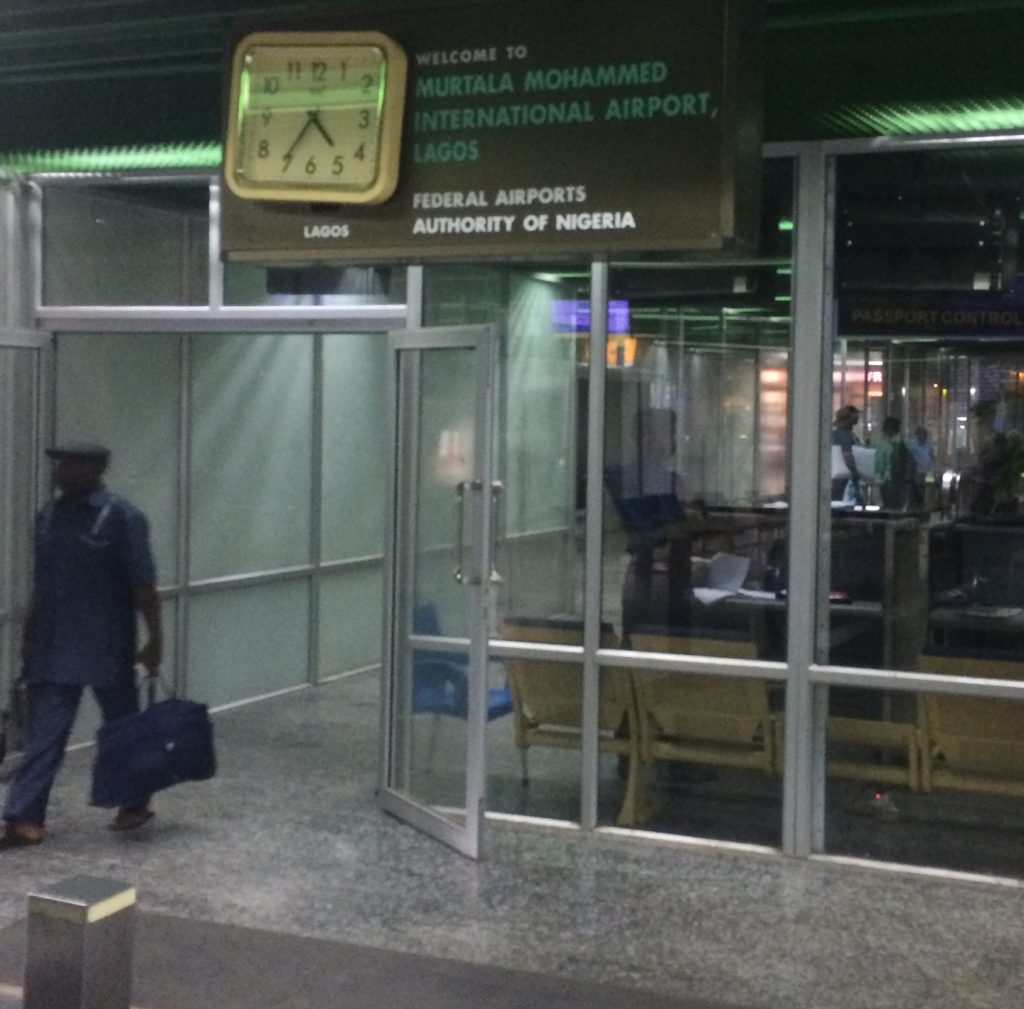 The Consulate expediters met us, and we began the chore of finding and organizing all of that stuff.   We made it through passport control just fine, and all 18 of our suitcases and our carryon cat and cargo dog all made it to Lagos as planned.  The cargo dog is where we ran into a roadblock.  Despite having sent in the paperwork required by the Nigerian government for the pets (with a first vet exam $$$) about 6 weeks ago, and having had a second vet exam ($$$) which then had to be overnighted to the USDA office in New York to be endorsed ($$$), some officials at the airport were claiming we didn’t have the correct paperwork to import our dog.  One introduced himself to DyAnna as “Doc” So and so, claiming to be a vet.  As he was scrutinizing our paperwork though, he asked what “spayed” meant, and was incredulous as to why we would ruin a dog by making it so she couldn’t have puppies.  He insisted that due to our not having the correct paperwork, the only way we could have the dog released to us was to pay a ₦50,000 (about $160) fine.  In the alternative, DyAnna could leave her passport with him.  Yeah, not gonna happen buddy.  The expeditors were livid with him.  After about 2 hours, with very tired and hungry kids waiting in the motorpool vans, our hero the expeditor was able to browbeat the airport staff into releasing our dog to us, and we were off to our new home.

My first day of work was the next day, and so far my colleagues have been fantastic.  Very friendly, and there is a good feeling of a team at work.  Everyone has been pitching in in the absence of a CLO (Community Liason Officer, they plan events, match new people up with sponsors, and generally keeps morale up–ours left post a few days before our arrival, and due to the current hiring freeze for EFMs, that position cannot be replaced).  We’ve been warmly welcomed, there are some upcoming activities planned for the consulate community, and today we attended a BBQ.  I’m looking forward to getting started with the work this week. 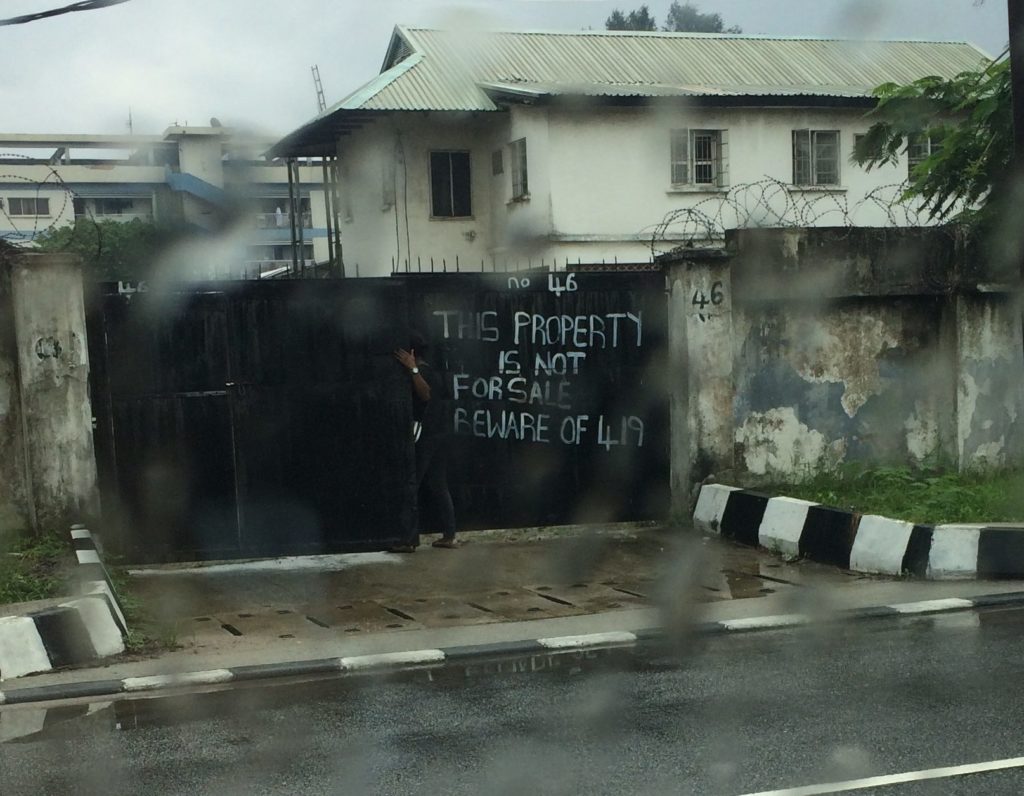 We had shipped some dogfood and catfood ahead, and it was waiting for me in the mailroom when we arrived. Saturday, my sponsor was kind enough to drive me to the Consulate to pick it up. On the way I was amused to see this warning. I had read about warnings like this being painted. 419 is a reference to a section of the Nigerian criminal code dealing with fraud. Apparently some fraudsters will claim to be selling a property, and then abscond with the buyers money. These warnings are painted in response to that con.

One final thing.  We packed out of Virginia back on 6/22, hoping that our UAB (air freight of some of our belongings) would make it to us in Lagos more quickly.  We figured it would be easier to be without our stuff in Virginia than it would be in Lagos.  It worked!  My sponsor mentioned to us while we were at the airport that our UAB had already arrived!  It was delivered the next day while I was at work.  I love it when a plan comes together!