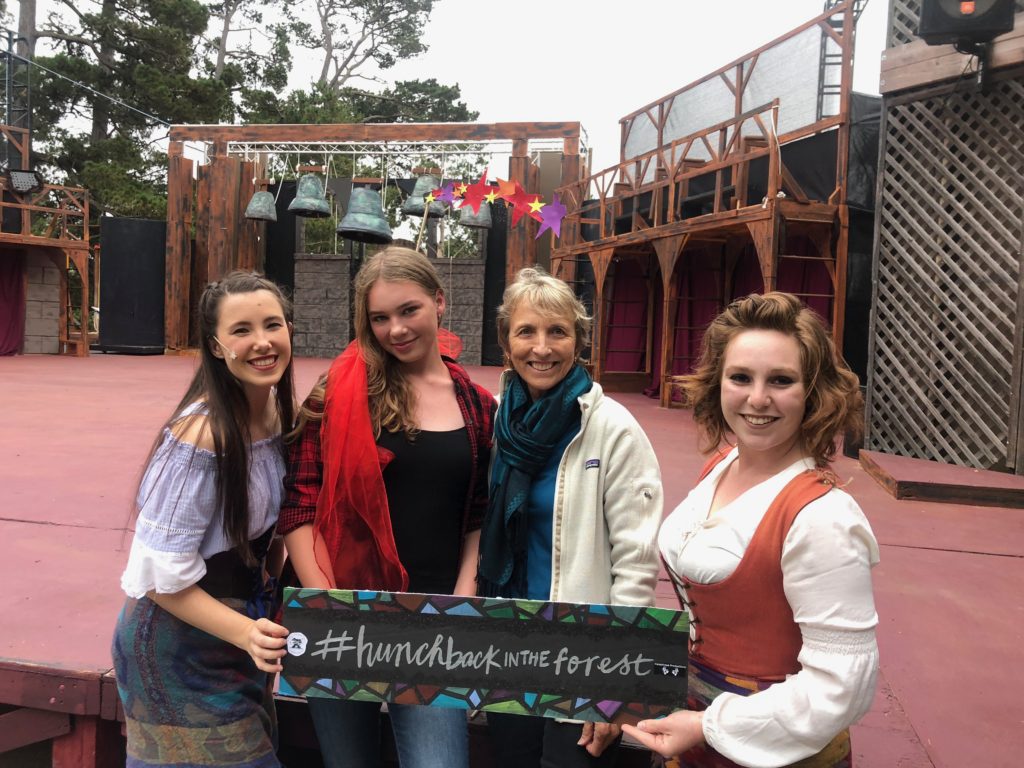 This summer I got the chance to see three different shows while traveling in California.

#1 The Secret Garden- The Western Stage 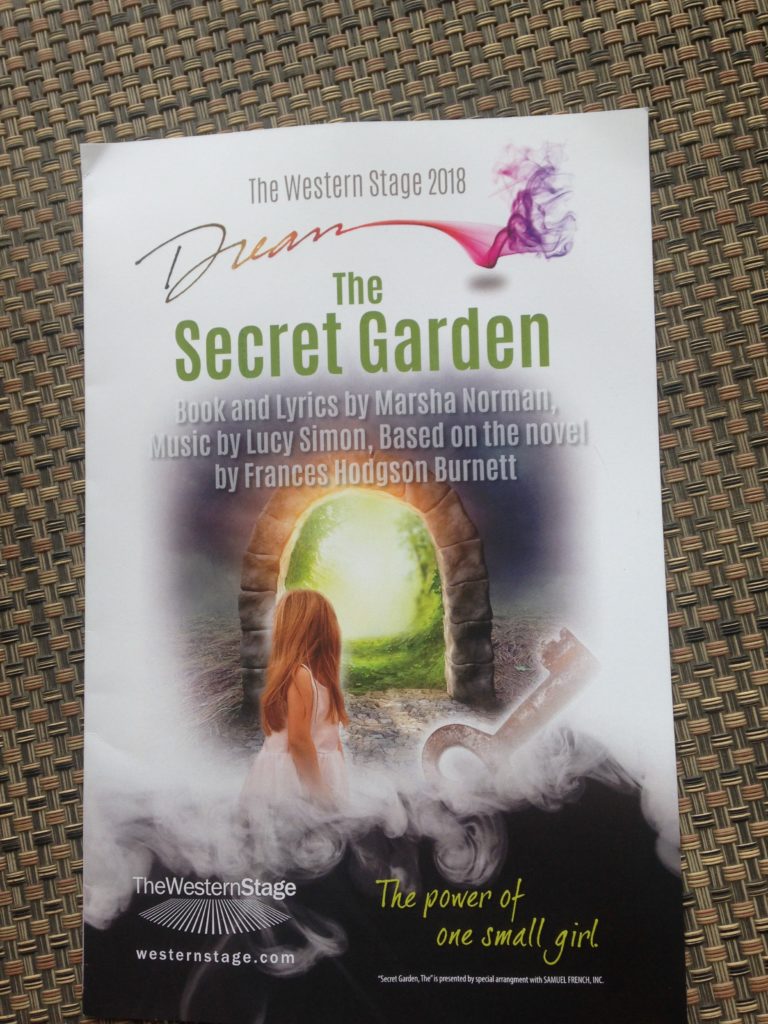 We went to see The Secret Garden while Mom and Dad where up in Washington. I had only ever listened to one song in this musical so I didn’t really know what to expect. I loved it. It was probably my favorite performance I saw while in California. 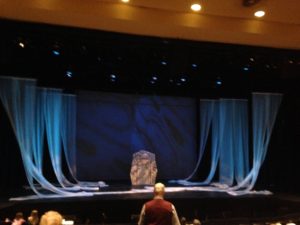 The stage was set up very simply, only bringing in props like beds and branches when needed. My favorite thing about the whole production (aside from the music which was amazing) was the curtains at either side of the stage. The dead (Mary’s parents, her Aunt Lilly, and all the background characters who had died from the same illness as Mary’s family) all stood and acted behind the curtains at the beginning, symbolizing the veil between the living and dead. Throughout the play the dead were never able to touch the living. Lilly would put her arm around Mary but it would hover a few inches from her skin. Towards the middle of the first act  the dead began to try and reach out to Mary but were tied up in the curtains and couldn’t reach her. During the last song of the first act (Final Storm) while Mary was running around terrified, her parents struggle to reach her and only at the turning point in her life did her father break free from the veil and was able to hug her. The same happened later when Lilly was able to break free and hug her son when he was scared and missing his mother, and when Lilly kissed her husband when he was deciding whether or not to go back to the house with Mary or just to let her go to boarding school.

There was some amazing physical theatre and dancing with the veils and that stayed with me for a long time after. Throughout the entire play I was staring at all the physical theatre and got so exited  that I ranted about it through the entire intermission. The continuous lack of physical contact between the living and dead being broken only during the turning points in the three main characters lives was an amazing directors decision. 10/10 would watch again! 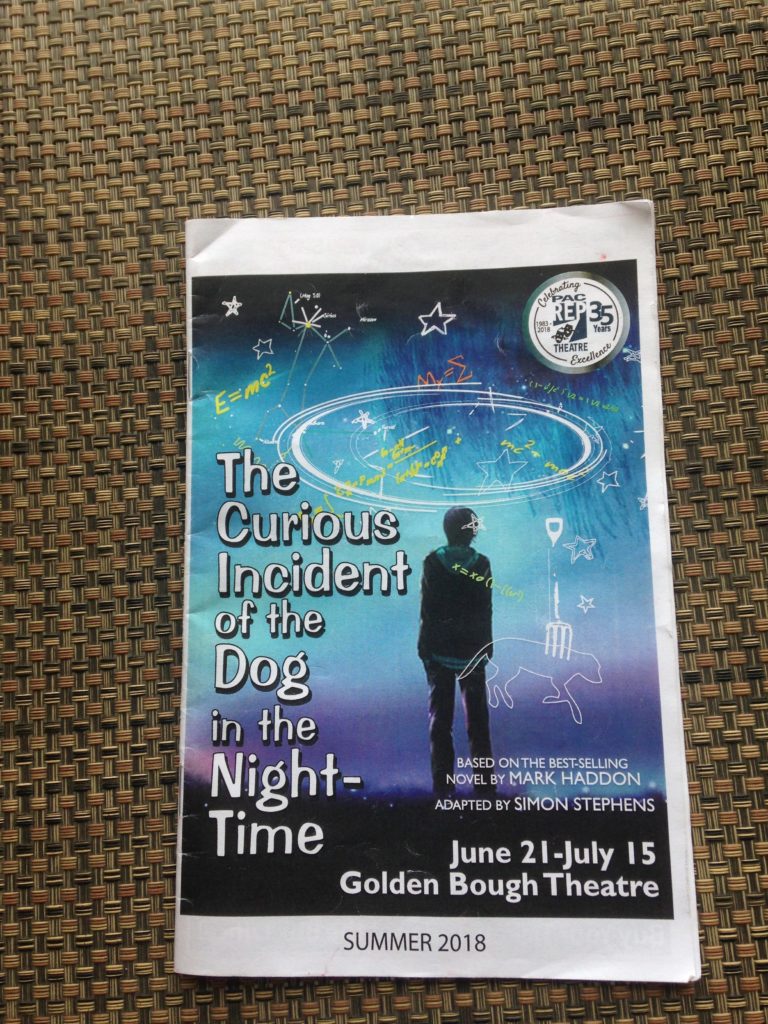 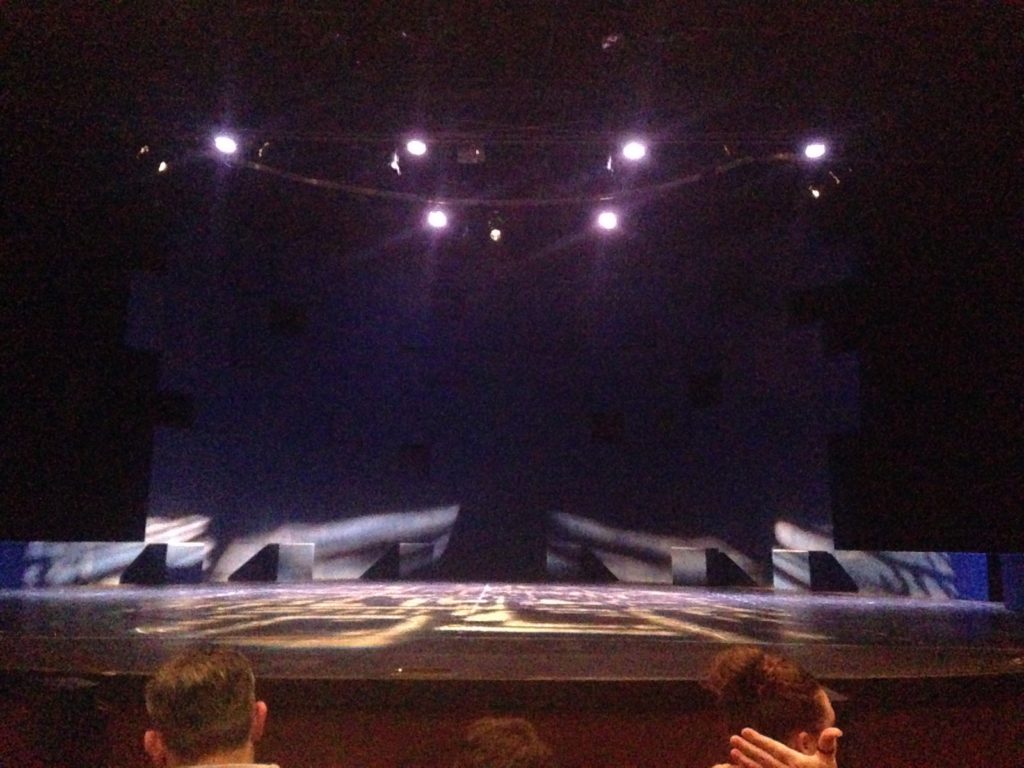 The Curious Incident of the Dog in the Nighttime (TCIOTDITNT) was an amazing production. I had seen a recording of it once before in my Theatre class when we were studying physical theatre. TCIOTDITNT is a straight play, which means a non-musical. It is about a boy with autism and his struggles as he tries to solve the mystery of what happened to his neighbors dog. It is a fairly mature play, with several F-bombs and mature ideas sprinkled throughout, so Oliver stayed at home with his cousin and the rest of us went to watch. I knew what to expect with this one, so there weren’t any surprises for me, but Harrison and Everett Roger were very surprised at several points. Harrison especially loved the end when Christopher explained his maths A level question and then exclaimed “Confetti” as confetti fell from the ceiling. My favorite part was a physical theatre bit halfway through the second Act.Christopher is hiding from the police by laying on boxes representing suitcases. One by one people come to collect their suitcases and he roles off that suitcase onto another until he’s curled up on his back on top of one suitcase. The physical theatre was amazing, which is my my theatre teacher showed us this particular play instead of another one. My Great Aunt Karen got to come see this performance with us which was really special because in the last few years she’s been fighting cancer and not feeling well. It was a lot of fun sharing one of my favorite straight plays with her.

#3 The Hunchback of Notre Dame- The Forest Theatre Guild 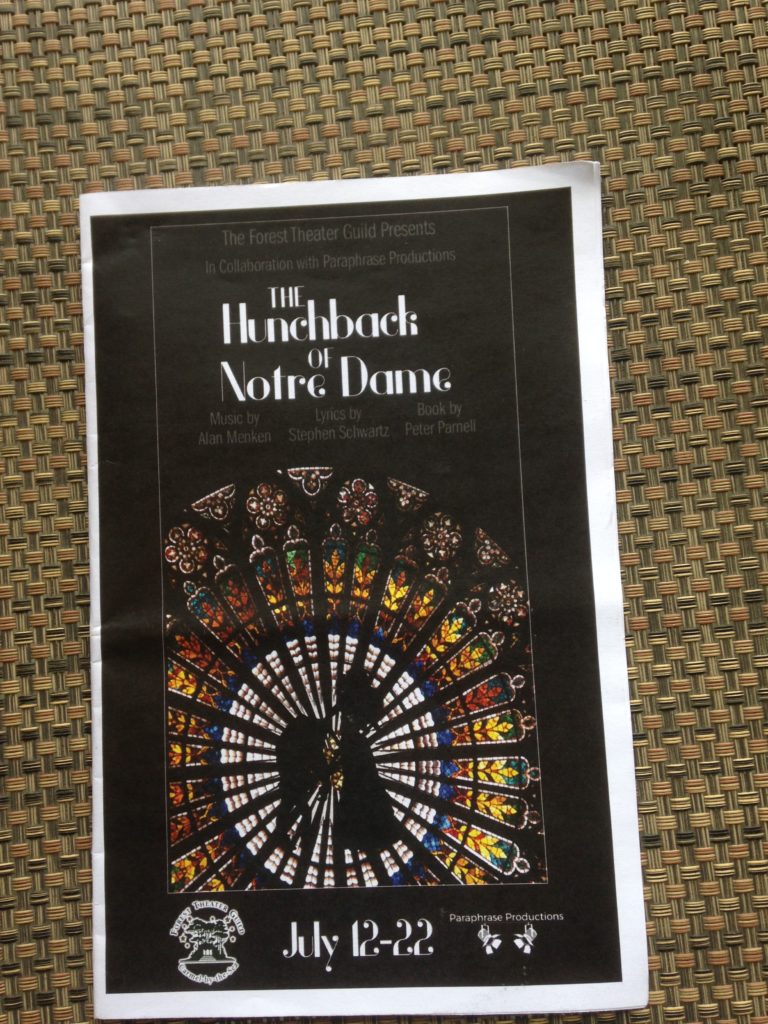 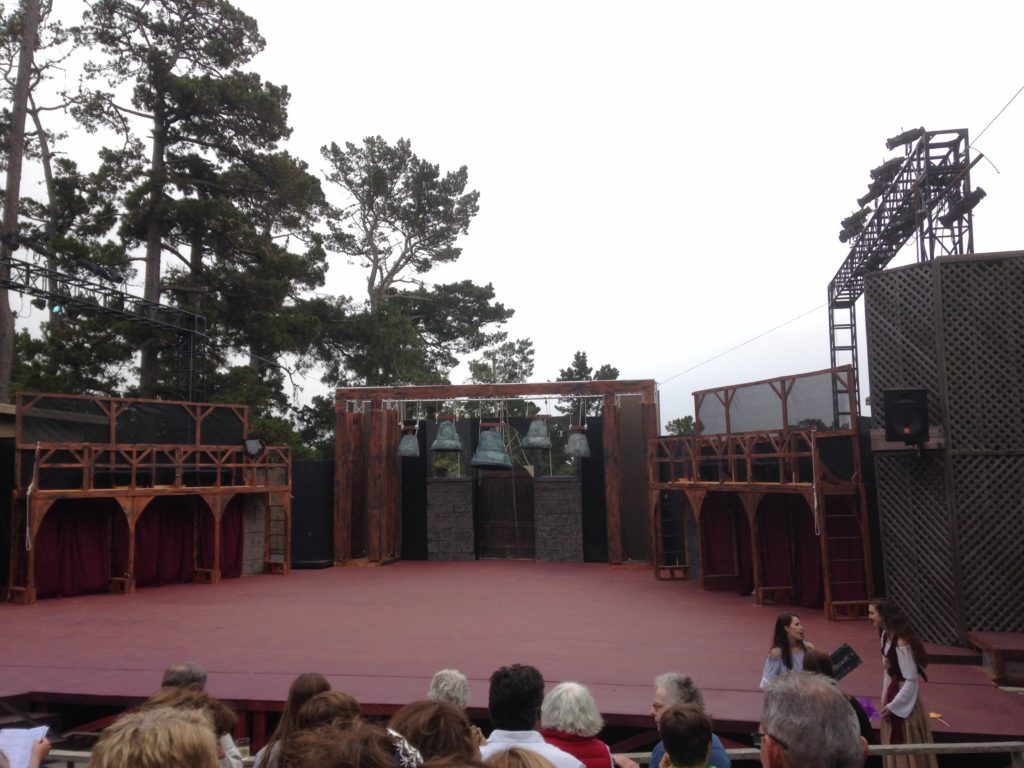 The Hunchback of Notre Dame is my favorite musical. I first saw it about three years ago at Tuacahn in Southern Utah with my Mom, Harrison, and our Neighbors. It was an amazing production with songs that sent shivers down my spine and choreography that seemed to complicated for any human to learn. My favorite part was when Quasimodo was carrying Esmeralda in his arms down stairs while still limping, hunched over, and still singing. He was so amazing I wanted to be him. Seriously, if there was a gender swapped Hunchback I’d want to be either Quasimodo or Claude Frollo. I’ve been listening to the soundtrack for years now and I have most of the musical memorized. I seriously love this musical. So imagine my excitement when Grandma booked tickets for us to see it. I found myself mouthing the lyrics along with the actors and singers. There where some bits that I liked better that the Tuacahn performance, and some bits I liked less. I liked some of the choreography of this one better, but I didn’t like the actor who played Frollo. He missed his music cues almost every time and was either a measure late or early to everything. He messed up on the lines and actual lyrics a few times as well, and every time he did I felt myself cringing just a little bit on the inside. He often had to change the key slightly so it was lower as well. Despite the poor casting of Frollo, I really enjoyed the casting of everyone else. The Esmeralda was a woman of color with an amazing soprano voice and some serious dancing skills. The Quasimodo had an amazing voice and was a great actor who fit his character very well. They both also improvised very well when small mistakes where made. At one point Quasimodo was supposed to set Esmeralda on a bench but he tripped and when she almost fell of said bench he improvised the line “Esmeralda don’t fall.” It might not seem like such a big deal to improvise a single line, but as an actor its hard to improvise when you are used to a set script, especially if you have to make sure the next line will make sense.

All in all, it was great to see different productions of shows I’ve already seen, and to see brand new shows. It was awesome to spend some time with my Grandmother and to share my favorite thing with her. I’m so exited to add five more playbills to my collection when I’m in London this October!