Anyone who has children knows what it is like to have a picky eater. I happen to have four of these lovelies myself. I was also a very picky eater as a child growing up. The foods I detested were as follows: onions, celery, lettuce or cabbage and anything spicy. I didn’t eat a salad until I was pregnant with my first child and was certain if I didn’t start eating salad soon she would be born with three arms.  My own children thankfully have been much more accommodating regarding food and nutrition however I can not name how many women I know who live their lives as short order chefs. NO THANK YOU!

Don’t pull your hair out. Following you will find the top tips I have discovered to keep my children eating a varied diet with out forcing or sneaking food into their meals because who has time for that. They now at ages 6-13 eat pretty much anything.

Being able to have a small amount of control over our food is part of what makes us feel human and independent. I try to allow my children the same courtesy. Each family member gets to choose one food they never have to eat. Just one. I will not make accommodations if that food is in a dish they are allowed to pick it out. They do not get something instead of their one food, you would be surprised how often they decide it is worth it just to eat up. They can only change their one food every 3 months to keep them from changing it up every meal. My one food is raw onion. Husband-eggplant. Children are as follows- salmon, cooked mushrooms, black olives and peanut butter. This has been the biggest thing that helped. They eat everything else.

Early on I learned my daughter would claim she was full in hopes that 45 minutes after a meal she could eat Goldfish crackers instead of her rice. This is a pain and wastes so much food but I don’t believe in force feeding or “clean your plate” attitude. If they are really full they will make it to the next meal or if not they can have what is left of their lunch as their afternoon snack. It makes it easy.

Allow them to deconstruct their food

That child who loves tomatoes may not love them on a sandwich. Maybe he will eat turkey but not when it touches the bread. Don’t like PB and J because the sandwich gets soggy, let them eat a spoonful of PB and two plain pieces of bread. What do I care as long as it isn’t more work for me. Give up and just let they take their food apart and eat it how they want. I myself hate lettuce on sandwiches or taco’s. I still eat it I just order it on the side and eat it like a salad with no dressing before digging into the main course.

Broiled asparagus in our family are called green french fries. Pasta with big chunks of tomatoes, monkey chow.  Broccoli are mini trees. You get the picture.

My children were not apt to like salad right away. The different textures all mixed around in dressing. I didn’t blame them. I would watch them devour food from a relish plate though in no time flat. I began allowing them to make salad finger food and serve the dressing on the side for them to dip. Lettuce included. It worked great they eat everything the problem is now they are big enough to know better and we are having to break the finger food habit. 🙂 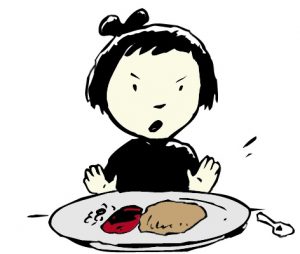 Toppings make everything better. They won’t eat the green beans but they probably will will bacon crumbles on top. Anything is better with butter, or ranch dressing, or cheese. I found that if I let them top things themselves eventually they would eat them topping free. The same goes for using salt, pepper and other seasonings. Teach them to pour the salt into the palm of their hand then sprinkle on their food. This prevents them from adding too much but they want to eat it because they made it just so.

I was never allowed sweetened cereal as a child. It is delicious and not really food so I understand why. However, cold cereal is so nice to have around for quick food. I mix my plain cereal with sugared cereal to make it more fun and less like I am depriving them their childhood. Regular Cheerios with Honey Nut Cheerios. Plain corn flakes mixed with Honey Bunches of Oats. Cinnamon Chex with regular Chex. If the cereal is the same consistency it works really well and cuts the amount of sugar in half.

The trick with green smoothies at the beginning is to serve them in a solid cup with a lid and a solid colored straw. They won’t notice they are green. Once they realize they like them you can put them into regular cups.