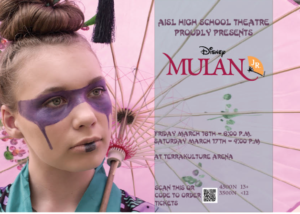 As a few of you might know, I got the amazing opportunity to play the main role of Mulan in our school musical production this year.

It all started with my audition last October. I had signed up immediately and was really excited. I had only been in school for two months so I didn’t know many people, but was acquaintances with a lot and friends with a few.  There were only a few people auditioning for the lead, one of my closest friends Kei, an 11th grader named Sarah, and I, so I was really nervous. I was going up against not only one of my only friends, but an 11th grader who had been in the high school a lot longer than I had, and who the teacher knew well. I thought about changing my audition to Mushu because I didn’t want to ruin friendships, but in the end, I decided to continue with my choice and let things play out. I got the email a few weeks later that not only had I gotten the role, but Kei had as well! Mr. Patton had doubled the Mulans, Mushus, and Shangs so there wouldn’t be any drama if one got sick. One Mulan would perform one night, the other the next. With both Kei and I as Mulan things got interesting for a while. We kept on trying to out-perform the next, still competing. Eventually, Mr. Patton told us to just stop, that he had chosen us each for a reason and we had both gotten the part, that no one was better than the other. We stopped competing and started helping each other. In the end, I’m glad that we both got the part. We ended up helping each other in more ways than one, holding each other up, and teaching each other to be better ourselves. 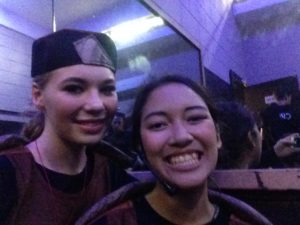 We had rehearsals about once a week, maybe twice until about December. In December we started picking up the pace. We were supposed to have the entirety of both act one and act two memorized by the time we got back from Christmas break and then we would have rehearsals twice a week, sometimes three. I loved it, it gave me something to do after school, but other people hated how it got in the way of sports and other after-school activities. 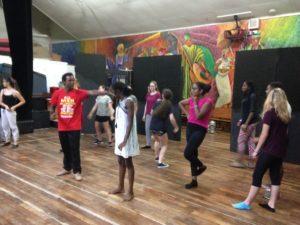 I had to develop close relationships with so many people because of this musical, especially with Sarah who ended up being my Mushu. We’re now great friends and are actually have a few things in common. Both Kei and I found it awkward at first, playing this girl who has a huge crush on Shang,  but we learned to separate reality from the character and even developed an odd sort of chemistry with our respective Shangs. My Shang, Eathon, caused me a lot of stress because he didn’t know all his lines until the day of the first performance. It was really interesting watching him grow more comfortable in the role, and more comfortable with singing. I know that in general, very few boys end up in theatre because it is typically seen as unmanly or soft. Soft isn’t what men do in theatre at all. Hours of martial arts training, days of choreography and dance rehearsals where, as a guy, you’re supposed to be able to perform lifts as well as other difficult moves? That isn’t soft and definitely isn’t unmanly. 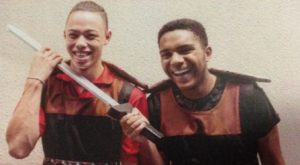 As we got closer to the performance date, we had to face the cold hard truth that is choreography. None of us had been looking forward to it, and we had avoided it for as long as possible, even choreographing our own moves for most of the songs. But the jazzy “Keep ’em guessin'” number demanded proper choreography. With most of us at a below beginner level, Mr. Ikem had his work cut out for him. We spent days figuring out the correct moves for the song, and days more practicing by ourselves at home. He wasn’t messing around.  Below is our first time running through Keep ’em guessin’, not singing, and without costumes, next to our final performance.

We also learned a bunch of physical theatre that we used several times in the play. Originally the Mulan character was lifted up into the air three times, it was cut down to one because of how difficult it is to do. The song below originally had a lift at the end, and I’m actually kinda sad they cut it. It was really cool to watch someone go up in the air as the last note was held.

With only a month to go, February got busy. We had two or more rehearsals after school a week, as well as 9-4 on Saturdays. Costumes were introduced which made everything more real, and more complicated. The costumes are actually really interesting. Most of them are actual Chinese style, but with amazing Nigerian patterns on the fabric. Quick changes are an actual nightmare. At so many parts in this musical someone has to run offstage change in less than 10 seconds and get back on.  Ellie had to run off after Keep ‘Em Guessin’ and come back on to be Chi Fu in the next scene. I had to change onstage at one point in Honor To Us All. I also had to change from Mulan to Ping in less than 30 seconds, including painted socks which nearly killed me. After Keep ‘Em Guessin’ everyone had to run off and change into soldiers for the next scene but Aya, Leonie, and Kristen had lines and were the top priority. I had to change back from Ping to Mulan in less than ten seconds which was the most stressful ten seconds of my life, topped only by Kei’s ten-second quick change. The problem was, I had to get back into a specific costume, and that costume hadn’t been taken out of the basket and returned to its hanger. There were five seconds of scrambling to find it before grabbing Kei’s costume (it was the same costume design and pattern, just a lot shorter so it fit Kei) and began to put it on. Mrs. Patton saved the day by finding the right one and got it on me in less than five seconds before I ran back on stage. I did my best to help with Kei’s quick change by getting the costume in the right place but the panic was still there. There’s another quick change on stage that Yao (Aya), Ling (Leonie), Chen-Po (Kristen) and Shang had to do during Keep ‘Em Guessin’ Reprise.

Performance day brought a whole new set of challenges and last minute changes. Even little things like what direction you face, or what door you enter through takes a while to get down and cemented in your brain. Mere hours before our first performance we did our first tech rehearsal (usually you get a tech week, we got a tech hour). Microphones were attached to our faces and wires run through the back of our costumes. Costume changes messed up the microphones constantly, and the box that the wires led to pulled our pants down a little. There were too many microphones, then not enough. People couldn’t change microphones from person to person quickly enough to get back on stage in time. We also had to work with lights and experiences blindness going from the pitch black backstage to onstage. One last run through of Keep ‘Em Guessin’ with Ikem and we where backstage putting on makeup and doing hair. Everyone was asked to bring their own foundation, eyeliner, and mascara. Suffice to say there were a few kids with faces many shades lighter than usual. 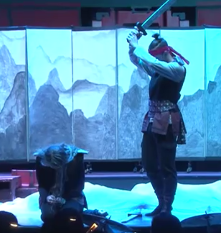 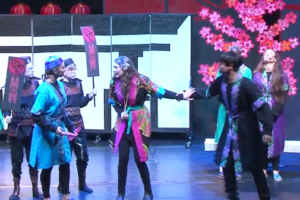 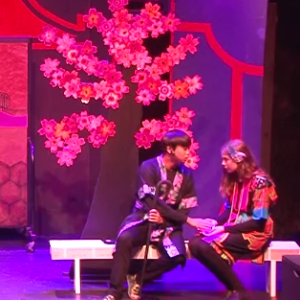 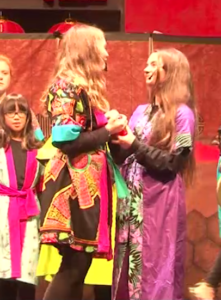 Performance there and gone, applause, flowers, speeches, and back again the next day. Kei performing was actually way more nerve-wracking for me than when I performed. Kei didn’t think she could do it, she didn’t believe that she could perform, she said she felt sick, but she went out there anyway. I watched her from offstage, there was a place where if you sat just right you could see a little bit of what was going on without the audience seeing you. I watched her sing and act, and I sobbed when she sang Reflection because she was doing it! She was performing and singing and making people in the audience cry and cheer and clap and she KILLED IT! I was so proud of her, a lot of people were, we were all waiting offstage to give her a big hug. She’s one of my closest friends and she completed the first step towards her dream of being Eponine on Broadway, and she can do it. She proved she could do it when she performed Mulan. I am so proud of her. 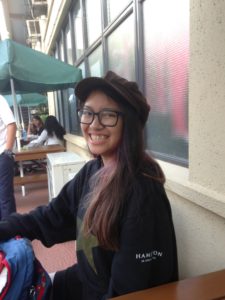 After packing up drums, flutes, sets, costumes, and props we got to the after party. There was a cute little cake with Mulan on it and, just like with weddings, the two Mulans got to cut the cake. Over the course of the year, I have gotten to know the individual people who worked on Mulan. What started as a bunch of kids that barely knew each other had developed into a true ensemble. A true theatre family. We have helped each other through panic attacks, lived through grueling choreography, long Saturday rehearsals, and helped each other grow in ways I didn’t know was possible. While we are already planning next years performances, I know that Mulan will always have a piece of our hearts. 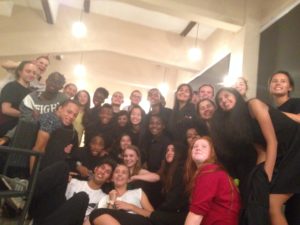 Here’s a behind the scene’s that a friend of mine made:

Here’s what I think are the funnniest parts in the play, notice how Harrison is in quite a few of these!