One of our first weekends in Lagos the Consulate organized a trip to a nearby beach.  We signed up, but demand was too high, and we were waitlisted.  This weekend another trip was organized, and we got to go.  There is a lot of shoreline in Lagos.  We live on an island in the lagoon, the US Consulate is on an adjacent island, and the Atlantic Ocean is only a few kilometers away as the crow flies.  However, most of the shoreline here is not fit for a “day at the beach.”  At almost all of it, buildings run right up to the edge of the water, which is sharply defined by concrete.  The water of the lagoon is filthy, both with silt and pollution and with trash.  Apapa (a local government area containing several ports and shipping terminals) is just around the corner from the Consulate, with row after row of enormous cranes surrounded by shipping containers, and probably 50-100 enormous freighters alongside, with even more waiting offshore for their turn to unload. 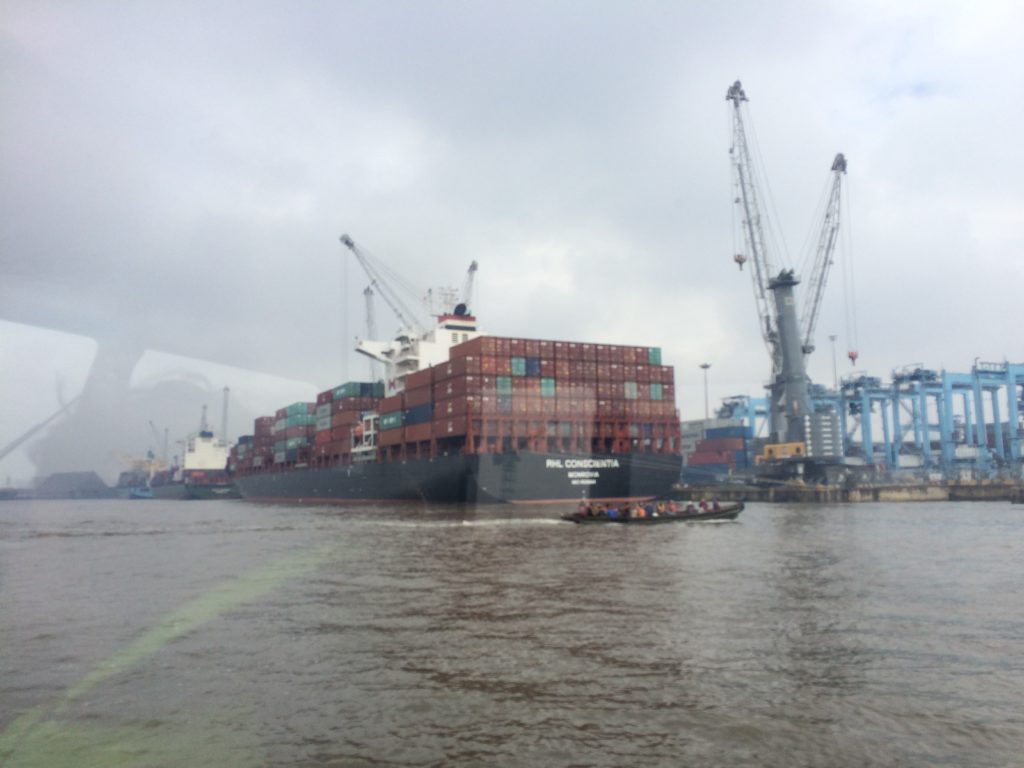 The scale of these ships is a little mindboggling.  They are absolutely enormous.  They come in many shapes, some with built in cranes, some with huge tanks for oil or liquified gas, some enclosed car carriers. Like many other things in Lagos some are new looking and well maintained, and others…aren’t.

Even more of the shore is filled with shantytowns and stilt villages.  We passed this one on the way to the beach today. 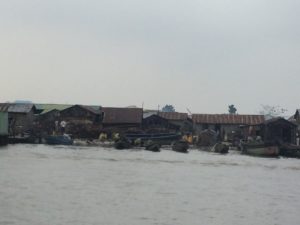 Some of these are fairly permanent fixtures, which we may get a chance to visit during a future Consulate excursion.  Others spring up and are periodically bulldozed by the local government authorities.  As we were getting ready to come to Lagos, Dy found a really interesting BBC documentary on YouTube called “Welcome to Lagos.”  This episode shows one of the stilt villages.

On the Atlantic side of Victoria Island or Lekki Island there are some beaches, including a few upscale beach resorts you can visit, if you’re willing to cough up a healthy chunk of change.  The Local yacht club has a private island out in the harbor with imported sand, which is a very nice place to spend an afternoon.  A lot of the beaches, however, look like this (courtesy of google image search). 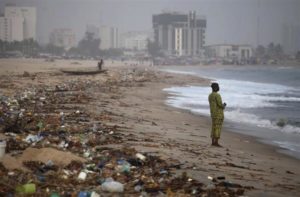 We loaded into 2 of the Consulate’s boats and headed a 30 minute ride west, passing through Apapa and along the above stilt village, and into an area where vegetation reclaimed the landscape.  We arrived on the north side of a barrier island, and set off toward our sanctuary for the day. 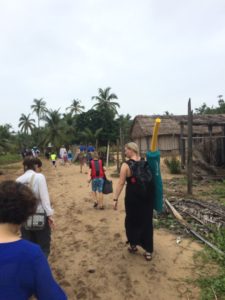 We passed through a cute little village with a little church and a smattering of buildings with woven palm frond walls, and arrived.  It was fantastic.  We had a covered area with tables and chaise lounges, a grill for the potluck cookout we would share for lunch, a small wading pool for young kids and a bigger pool, a volleyball net, lots of palm trees, nice clean sand, and gorgeous ocean views.  The ocean featured a serious undertow current, so there was to be no swimming, but we were able to dip our toes in the waves, which is good for the soul, as my dear wife says! 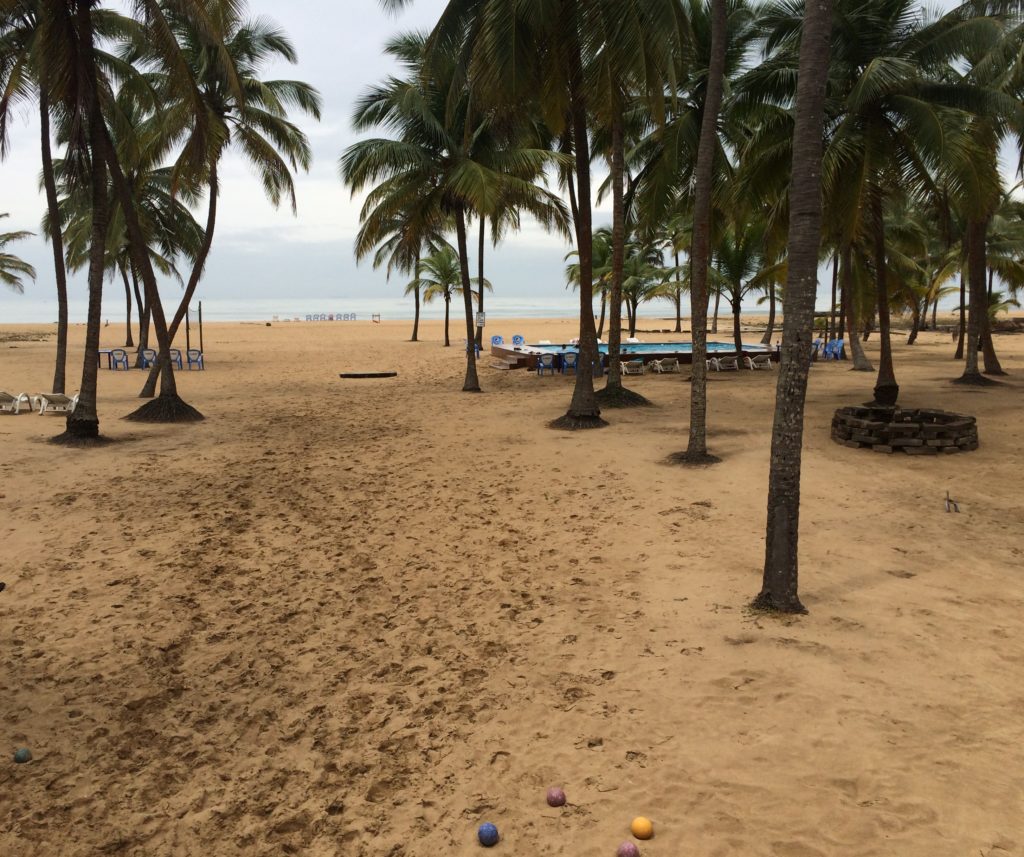 Paradise for a day – the view from the covered building. In the distance you can make out some of the freighters waiting their turn at Apapa. The area in the foreground would be filled by local vendors offering tablecloths and artwork later in the day, and several of us came home with souvenirs.

On either side were other private beaches, which were not quite as nicely maintained.  There were fishermen working the waters with small boats and enormous nets.

The view up the shoreline. 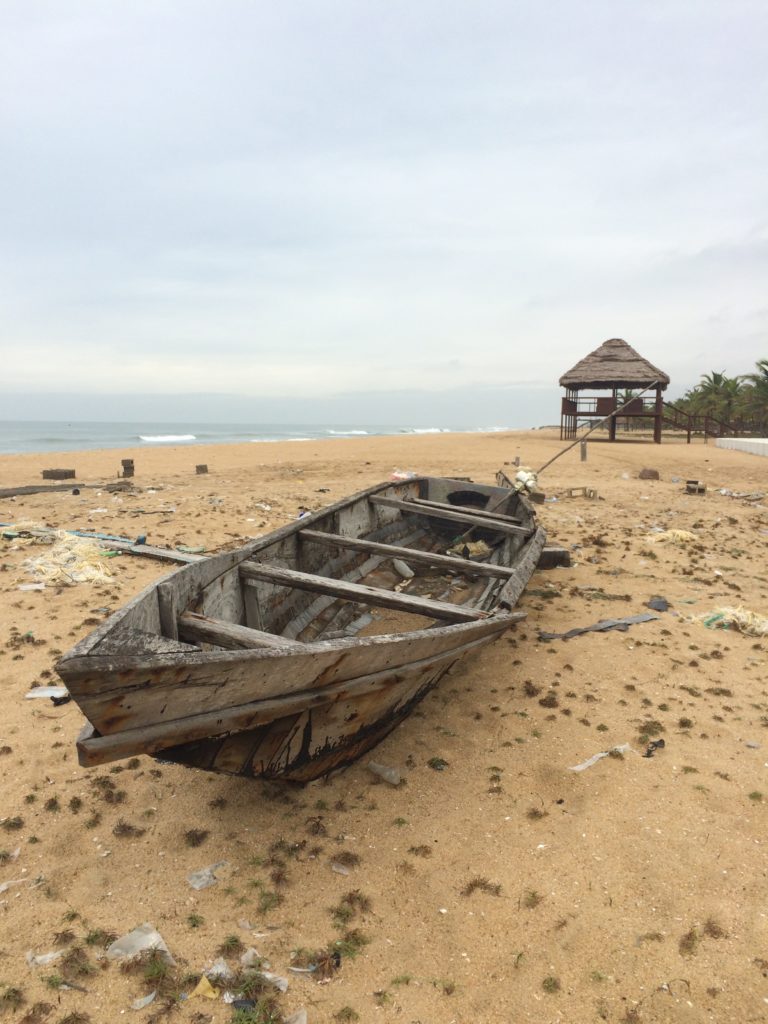 This craft has seen better days, but there were many more like it plying the waters.

We put on sunscreen and made a beeline for the waves. 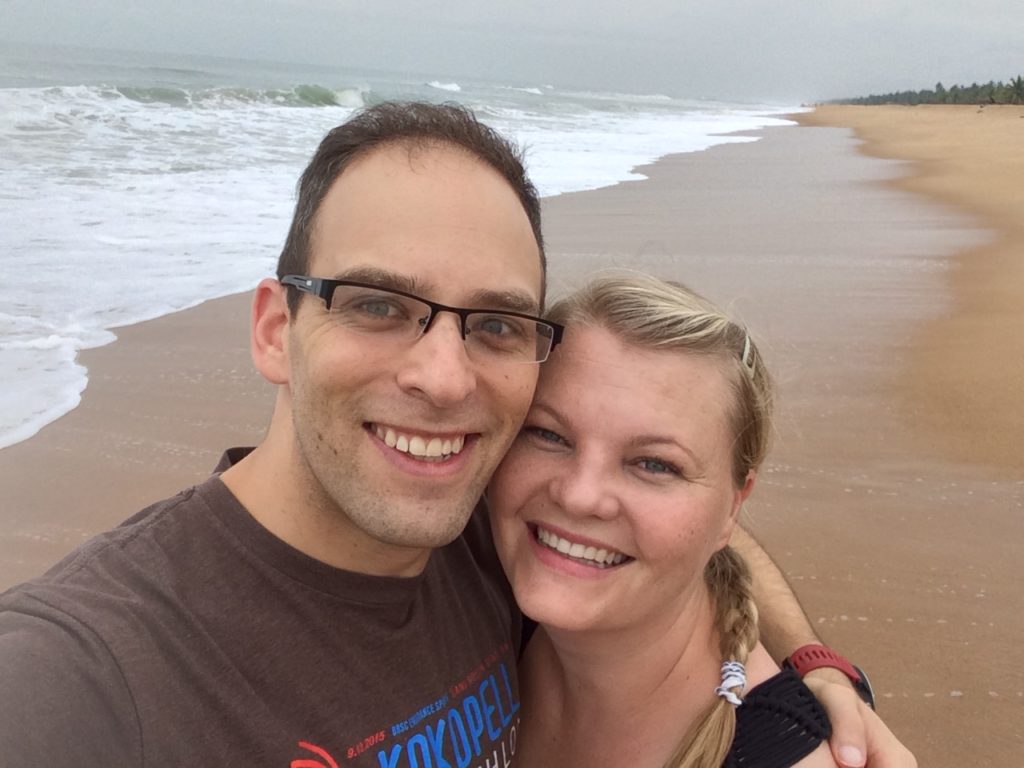 Dy found a friend. Note the condition of her hand, consider this the “before” photo.

We noticed a group of about 10 Nigerians pulling on a rope that went way out into the water.  I asked them what was on the other end of it and they said it was a net.  Dy, in Dy experience life fashion, decided to join in and haul the net with them.  It was a whole family affair with men, women -complete with babies on their backs-, and children helping out. They laughed and flexed their muscles when Dy started pulling but were glad for the help. They would pull then wrap the rope around a big post driven into the beach. They would then pull to the side until they had some slack then wrap it around another pole further down the beach. With two groups working toward each other they slowly enclosed the fish in their huge net that was out at sea then hauled it in. Dy was impressed with the mechanics and simplicity of how it all worked. They had already been pulling for over an hour when Dy started to help. 15 minutes later the contingent of our Marine Security Guard Detail who were also on the trip decided to join in. It was the biggest game of tug of war you have ever seen. Pulling until you were at the back of the line then letting go and running to the front to pull again. Another 40 minutes or so of work yielded results! 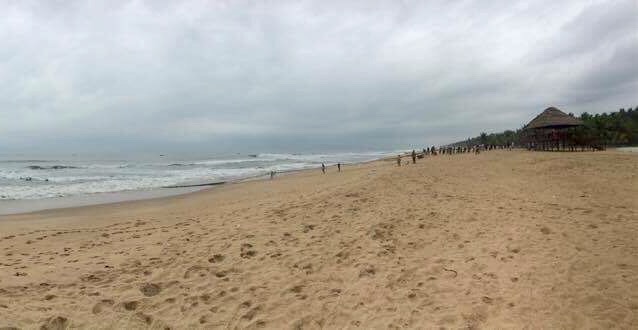 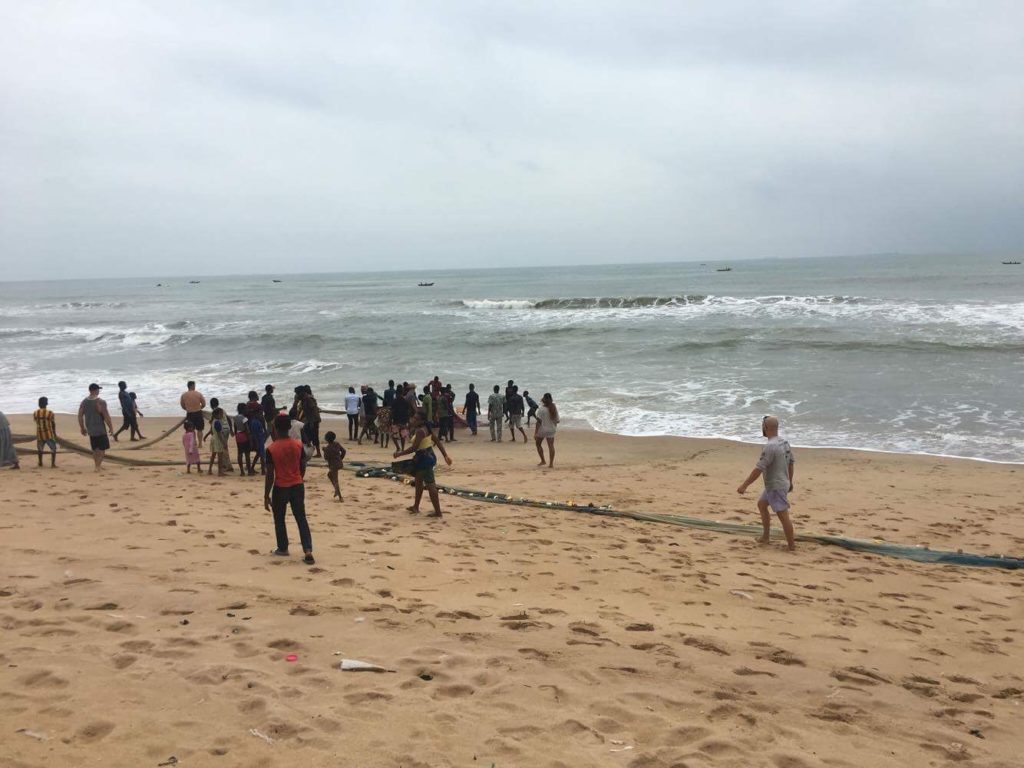 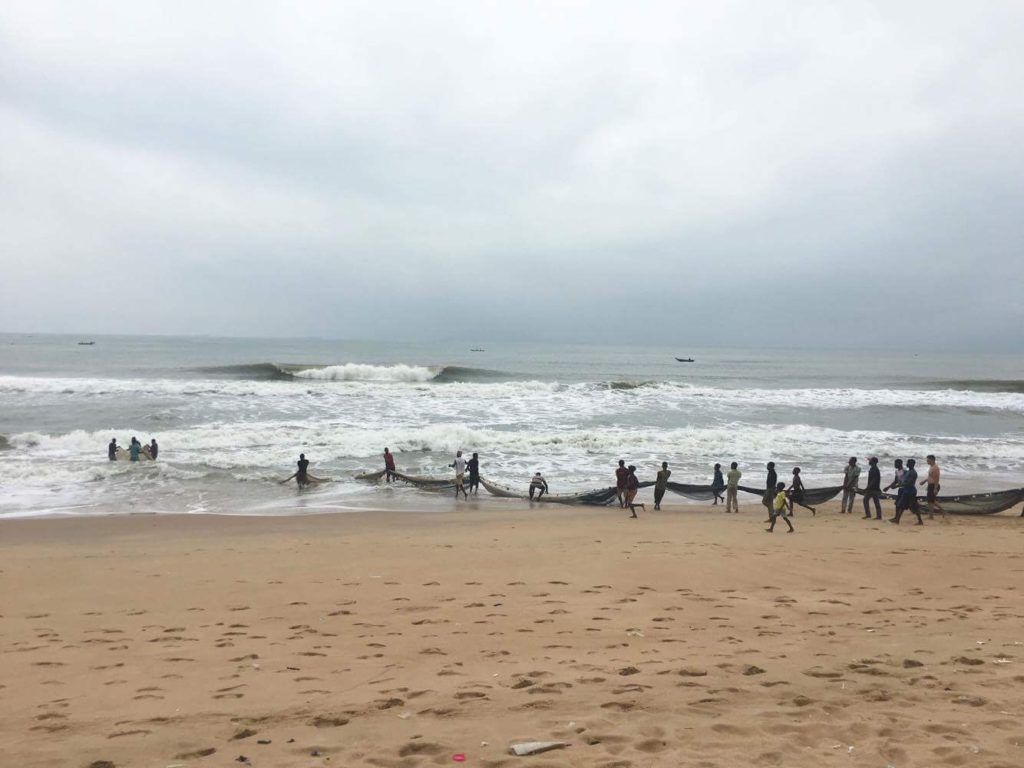 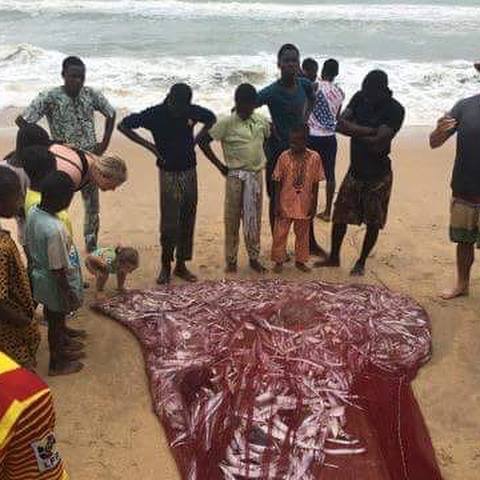 The payoff for 2-3 hours of very physical work. 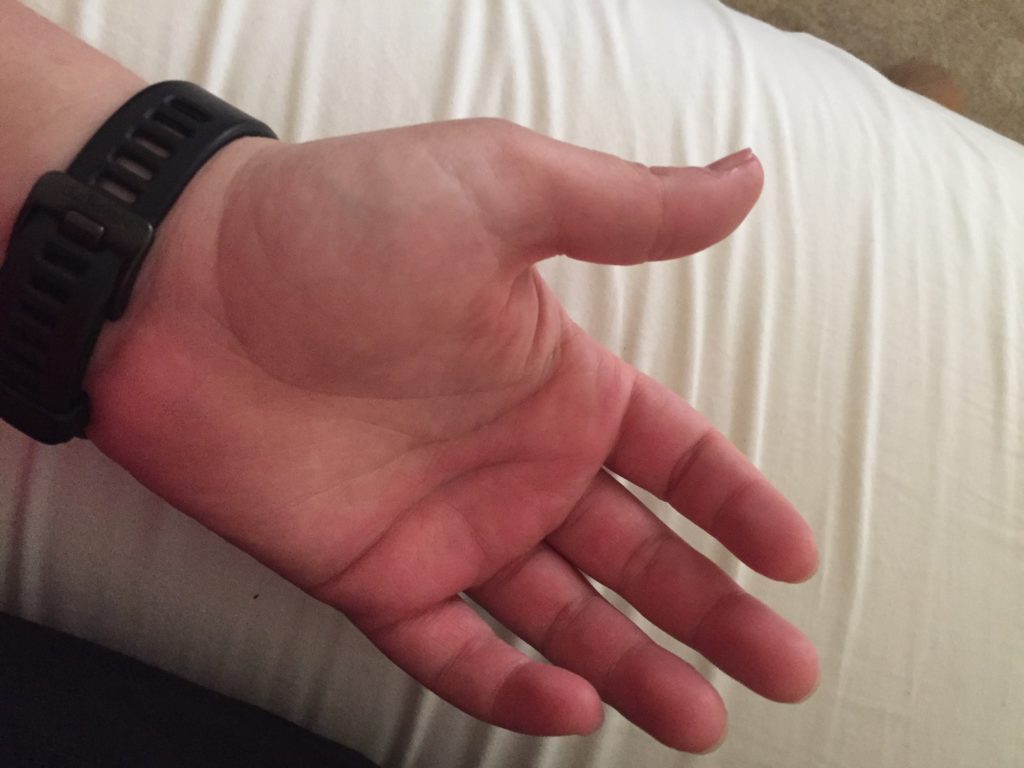 “After.” Who would have thought work gloves belonged in our beach bag?

We swam, we lounged, we played beach volleyball, we splashed in the waves, we drank coconut water out of coconuts that had been in a tree mere minutes earlier, we ate the super tender coconut flesh – it’s almost the consistency of jello when its this fresh!  We shared a potluck with our friends, we haggled with the merchants offering us their wares, and generally had an amazing Saturday.  We had purchased a couple of other tablecloths recently, so managed to resist the temptation to buy more of those, but we did get a cute Nigerian dress for Danni to wear on Nigerian day at school (still need to find something or get something made for the boys), and I just couldn’t pass up this treasure: 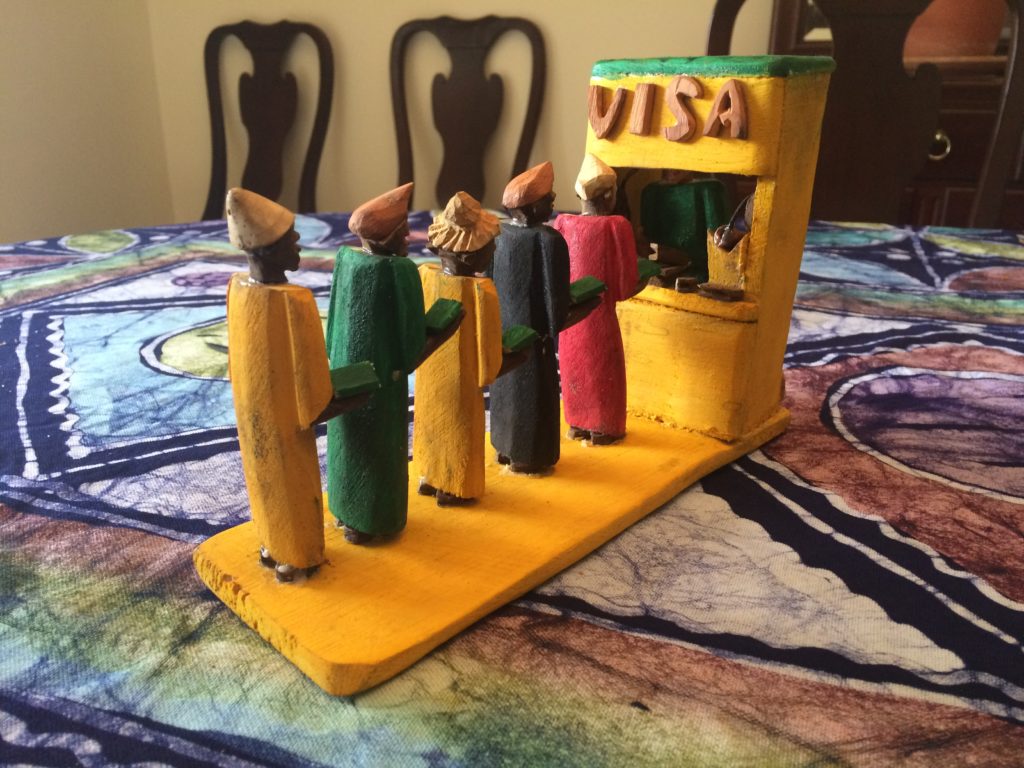 Complete with little green-covered Nigerian passports in hand! One of our new tablecloths in the background.