Most of the time, the bilateral talks between governments, the trade negotiations, the demarches (see definition 2), and other things that many people generally think of when giving thought to the jobs diplomats do, take place at a level far removed from the reality of an entry level consular officer.  As I posted recently, much of my work is very routine.  I interview applicants, I adjudicate cases to determine whether or not they meet the qualifications for the visa they seek.  Each day is much like the day before or the day after.  Occasionally, however, the job of an entry level consular officer is anything but routine.  I have a friend in Sierra Leone right now whose routine has been dramatically altered by the recent mudslide.  All of a sudden, she has been up to her eyeballs in the work of caring for US Citizens in need in that country.  Every foreign service officer who entered government service in the same way I did is considered a generalist, and from one tour to the next may be called upon to do consular work, political or economic reporting, public diplomacy, or management work.  Within each tour, other generalists may be called upon to act as consular officers.  Other special events can result in consular officers being called upon to act as political officers, as when I served as an elections monitor several weeks ago.

One thing which can result in an “all hands on deck” call is a high level visitor from the US Government to post.  My friends in the Philippines recently experienced this as Secretary Tillerson visited Manilla as part of his South East Asia Tour.  We were taught about working visits while in A-100, and it was also a topic of discussion at one of the weekly adjudicators meetings we hold in Lagos, so that we new arrivals would have some idea of what was expected when we had a visit at some point in the nebulous future.  The future arrived much more quickly than I had expected, as I and several of my colleagues received an email about 3 weeks ago informing us that we had a Congressional Delegation (CODEL) coming to Lagos, and that we had been assigned to assist with organizing their visit.  Concurrently, the Ambassador (primarily based out of the US Embassy in Abuja, Nigeria’s capital) would be visiting, and I drew the assignment of the Ambassador’s Control Officer.  We had a series of planning meetings as the visit approached, each one involving more and more of the Consulate’s staff.  Activities were planned, hotels and transportation arranged, guest lists prepared, all with a goal of supporting the policy goals of the members of congress who would visit.  The Delegation included Senator Coons (D-DE), Senator Bennett (D-CO), Senator Peters (D-MI), Representative Blunt-Rochester (D-DE), Representative Dent (R-PA), Representative  Sewell (D-AL), Representative Lee (D-CA), Representative Wilson (D-FL), and several of their staffers.

Last week the CODEL and the Ambassador arrived, and all of our hard work came to fruition.  We put in long hours–during the week I earned nearly two full days of comp time–everyone did a good job handling their delegated responsibilities, and the visit went really well.  As it drew to a close, several of us got compliments from the congressional staffers who were accompanying their principals, which felt great.  It’s always nice to make a good impression on those who control the pursestrings for the Department of State!  I got very few photos, as I was busy helping run the show, but  I’ll just recount a few moments from the roughly 36 hour visit which stand out in my mind.

Before coming to Lagos, the CODEL had spent time in Accra, Ghana, and in Abuja and Maiduguri, Nigeria.  We met them at the airport in Lagos, and chills ran down my spine as I stood on the tarmac and the plane with “United States of America” emblazoned on the side taxied up to us.

The drive from the airport through the dark to the hotel the CODEL stayed at was very reminiscent of our own first exposure to Nigeria just 2 months ago.  It was a very interesting juxtoposition, seeing my reaction to the Lagos roads and traffic this time compared to then.  Lagos has started to feel like my new normal.

That evening, I found myself listening to a pretty good live afrobeats band in the pool/courtyard area of a very fancy local hotel, talking with an Ambassador, two Senators and three members of the House of Representatives.  They’d had a long day, meeting with the Nigerian government and visiting a camp for Internally Displaced Persons who had fled the violence in Borno State.

We provided briefings from all of the section heads at the Consulate General in Lagos and we arranged a roundtable discussion between the CODEL and young Nigerian leaders, many of whom were Mandela Washington Fellows and other alums of President Obama’s Young African Leaders Initiative.

We visited a very cool art gallery and shop where I found a couple of books by Dy’s favorite Nigerian author, Chimamanda Ngozi Adichie, and to which I plan to take her on a date in the near future.

We visited Egbin Power Plant, a fuel oil or natural gas fired power plant, and one of the beneficiaries of USAID’s Power Africa Initiative.  We have come to know very well in the last few months that the municipal power grid in Nigeria is anything but reliable.  We are fortunate, as are many wealthy Nigerians, to have a generator backup at our apartment, so that the frequent power outages are little more than a momentary inconvenience for us.  However, the power supply situation has a huge impact on most Nigerians.  One study I found estimates that only 10% of rural households and only 40% of Nigeria’s total population have access to electricity.  According to USAID, 2 out of 3 people in subsaharan Africa lack access to electricity. 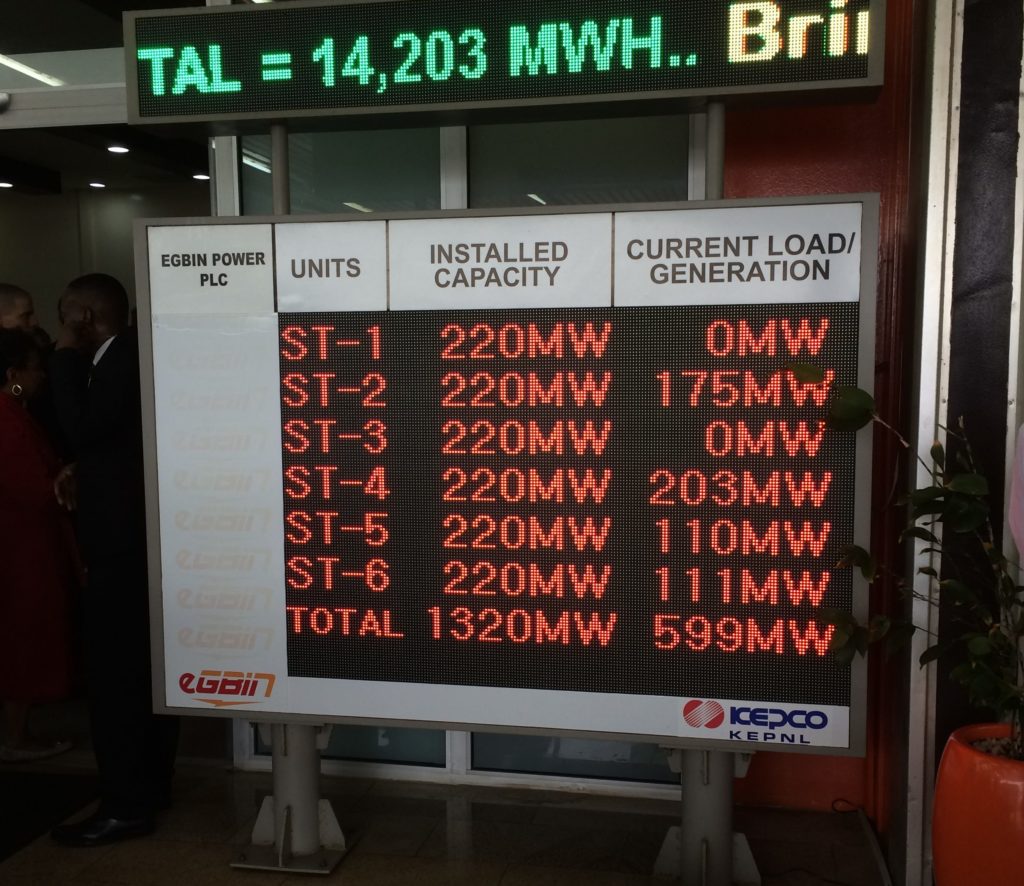 This status board from Egbin Power Plant demonstrates one of the issues: it has the capacity to generate 1320 megawats of power. However, the electrical grid can only transmit less than half of that, so 2 turbines sit unused. 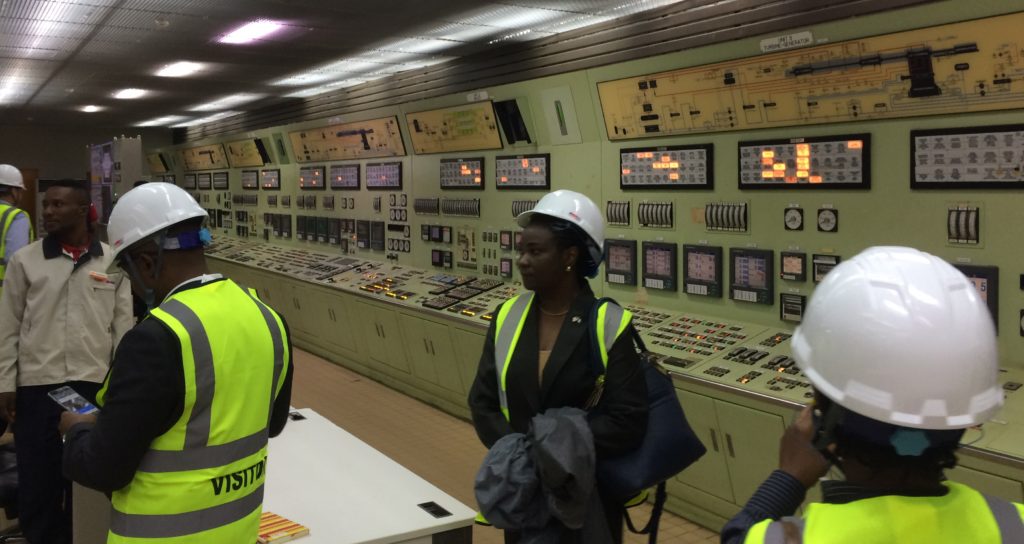 Egbin was originally constructed in the 1970s. It was initially designed to operate on either fuel oil or natural gas, to be more flexible. For the last 15 years it has been powered solely by natural gas, which is a much cleaner fuel.  As you can see, however, much of the plant is still quite outdated. 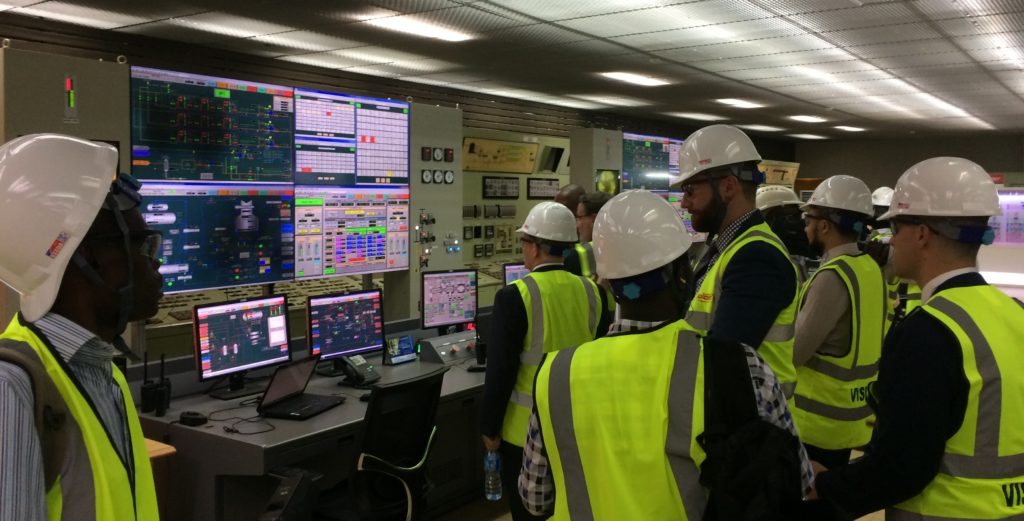 This control board on the other side of the control room is part of a major renovation Egbin has been going through. They are now hoping to install new American Made GE turbines and updated technology to manage the grid more efficiently.

We met with the  American Business Council (leaders of American companies in Lagos) to discuss the state of the Nigerian economy and opportunities for US Companies here.  Some estimates are that 60% of the food which is produced here does not make it to a table because of inefficiencies in the transportation sector.  Imagine if the electrical and other logistical issues could be worked out, what a difference it would make for Nigeria!

Working this CODEL and spending this time with Ambassador Symington, a career Foreign Service Officer first named as Ambassador (to Rwanda in 2008) by President Bush, provided an interesting glimpse for me into the bigger picture of US-Nigerian policy.

After all the long hours, we enjoyed one of the benefits of Foreign Service life this weekend.  We get US federal holidays (like Labor Day) off, and we also get Nigerian holidays off (like Eid ul-Ahad last Friday), so we’ve enjoyed a 4 day weekend.  Some of my colleagues jetted off to Germany or Rwanda, and its been fun to see their adventures on Facebook.  Rwanda looks beautiful, and I’d love to visit it some time.  As for us, we’ve been in full relaxation mode.  We had massages, we’ve been swimming at our pool, we caught a movie yesterday and enjoyed a fun meal out last night at a Syrian restaurant with friends, and breakfast this morning with more friends.  Tomorrow, it’s back to our typical routine, which in a developing country is often far from typical.