I have been very blessed to have made a wide variety of friends quickly here in Lagos. One such group are American and British spouses who work for Chevron gasoline, a huge employer here in Nigeria. Many of their children attend the American International School that my children will begin attending next week. Last week some of them invited us on a weekly field trip to the local Motherless Baby Home. They said I could bring the kids. They bring toys and a snack and play with the children for a couple of hours every week. Since school starts next week this was the one chance to have the children come along.

Of course it was a ridiculously rainy day. The streets were flooded. I joked with our driver as we climbed into the suburban that Nigerians have waterproof skin. The kids and I were decked out in rain coats and rain gear and still getting soaked to the bone yet we pass hundreds of lovely and adaptable Nigerians making their way down flooded streets in regular clothes and flip flops. I really can not adequately describe how wet it is here. Even when it doesn’t rain it is usually 80-90% humidity. Our apartment is fully air conditioned and we keep them running cold to cut the humidity and the likelihood of growing mold. That said I keep this precious beauty running 24 hours a day. 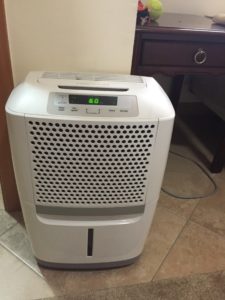 What is this my desert dwelling friends might ask? This is a dehumidifier. I dump at least 4 gallons of water from it every day. That is just in one room. It shuts off at night when full or else I am sure I would be getting another gallon or two at night. I move it from room to room. If I don’t the floors start to feel ” Sticky”. Anyways it is wet in Lagos during the rainy season, who would have thought.

The photo below I borrowed from a google search for “Motherless Babies Home Nigeria”. They asked us not to take photographs. 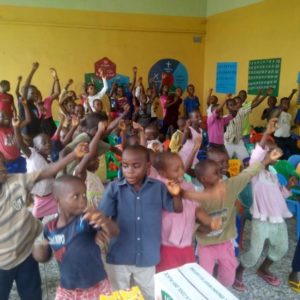 When we pulled up there was at least a foot of water everywhere. There was a large grassy area and play ground area where they usually took the children outside to play. That would not be possible today. I told the driver just drop us we will be fine but he insisted and inched his way into the compound trying to get as close as possible to the door. It made for a dramatic first entrance. A huge armored vehicle backing up to the orphanage door and 5 very white and very blonde people bobbing out. We were early, because it is me, I am always early even in Nigeria which runs on Nigerian time. I walked into the dormitory and it was incredibly dark. At first I thought the power must be out because of the rain but then I realized they don’t use any lights during the day to save money. It was dark. It took quite a while to adjust. I had warned the kids before we came that it would be very loud with this many children. The kids would be eager to have someone to talk to and more importantly to have someone to touch. I told them to leave their jewelry at home and to not have any toys in their pockets. I tried my best to prepare them but it wasn’t enough.

We walked into the dark room. A long corridor probably about 1,000 square feet. All the walls were filled with bunk beds and cribs. I did a rough count of 40 bunk beds and 35 cribs. Most beds had more than one child. The children were all in the beds waiting for our arrival. The minute we entered the room the kids started yelling and the toddlers and preschoolers began vaulting over the sides of their cribs to come say hello. 70 kids swarmed my little family in a loud roar of hugs and questions and pleas for attention.

Dannica instantly went to a crib and picked up a crying baby. I led the boys through the crib room into the adjoining room full of bunk beds and when I looked back Dannica had an arm full of babies and was singing to the toddlers at her feet.The older two boys were pulled off instantly being asked questions and getting to know the children. Oliver panicked almost instantly. So many children touching him. Asking him questions. They were asking in English but it is very different sounding than US English and he tends to panic when he can’t understand someone. He immediately started trying to crawl up me which just led the other children to begin crawling up me. I finally got him settled when I explained that the main question they were asking was his name, his birthday, and age.

I peeked over and Harrison was struggling keeping his hearing aids in his ears. So many curious little hands. So I went and took them and hid them in my bra as pockets were fair game to these little ones. Roger had fallen right in with the preschoolers. His favorite age group and had them playing a clapping game. Oliver was still panicking so I finally took him to the entrance and gave him a chair and told him he could come there when he needed a break. I rejoined the kids and began to feel a bit overwhelmed myself. So many sweet faces. So I had everyone move back and I led them in a basic game of follow the leader. I then led them in a song of Heads Shoulders Knees and Toes which they sang back to me in Yoruba the local language and laughed at my mispronunciation. It was so dark and loud I would have to get up very close see their precious faces to answer their questions. They all had their hair cut short to their heads. It makes it easy to keep clean and tidy looking but it meant I really had to pay attention to round little faces and what clothes they were wearing to tell them apart. The children were clean and well fed. Their rooms had only beds in them with mattresses. No sheets, blankets or toys. Possessions cause fighting in a group that large. It is hard enough getting my 4 children to share with their over abundance of toys. I can’t imagine with that many children. We were there for about twenty minutes before the rest of our group arrived. They brought in rugs to lay down, boxes of toys and stacks of books, paper and crayons. The children happily and eagerly gravitated to the toys.

The next hour and a half was a developmental psychology and anthropology nerds dream!!!! Observing so many children of varying ages interacting in such close quarters was fascinating. I could spend years there observing behavior. We played. Read. Sang. Colored. I took a liking to a few of the oldest kids there. Almost all of the children are under the age of 9 with the greatest majority in the 4-7 age range. There were a small handful of older children the oldest age 12. All of the kids were obsessed with my long blonde hair. It was so different to them. I came prepared for this after my experience in Haiti and I purposely wore my hair down so the children could touch and braid it. There was a 12 year old boy who asked me to teach him how to braid. He spent the next hour putting dozens of braids into my hair while I read to toddlers on my lap. There was one older girl who was causing problems. If I wan’t talking to her directly she would push or trip the child who was attempting to get my attention. She was especially harsh to Dannica and kept hitting her. Dannica and I discussed later on how hard it must be for her to be so much older than everyone else and to see Dannica with me, her own mother. Oliver kept coming over and pushing the children out of my lap insisting I read a book to him. He would whisper questions into my ears.

“Mom that girl has an eye that is completely white, what does that mean?”

“Mom why are there baby pottys in the corner rather that in the bathroom?”

“When are we going home so you can be just my mom again?”

I told the preteen girl that I would teach her something new if she would promise to be kind and to teach the younger children. She peaked up and beamed right away. I taught her how to make a simple paper airplane. Before long a few dozen children were eagerly at my side following my instruction. It was shockingly difficult because it was so dimly lit and because of the humidity in the air. The paper wanted to stick together and wilt. After a few minutes dozens of paper airplanes were flying through the air plummeting toward toddlers and babies who would instantly grab them in their cute fists. I showed the older ones a second airplane design. I made a few fortune reading paper toys for the older kids after they helped clean up the toys. At this point everyone sat on the floor and the kids had some pouches of chocolate milk and a peanut butter and jelly roll up. We carried the toys out to the car for the next week and waved good by to the children.

My heart! I just want to take all of them home with me which is always the problem. A problem Ben and I discussed in great detail before moving here.

After arriving home I spoke to each of the kids about their experiences. The older three all said they had a good time and they would like to go back but most of all they were really thankful to have family. Oliver said it gave him a headache and was glad that I didn’t have 70 brothers and sisters he had to share me with.

I hope to return most weeks for the time I am in Nigeria. I figure that I’ve gotten close to 300 hugs today. We have approximately 100 weeks left in our stay in Lagos, that equates to 30,000 hugs I can get over the next two years. Whose life isn’t made instantly better by an additional 30,000 hugs! That is enough to change the world.