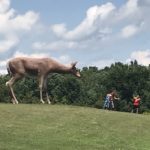 Spending much of July in upstate New York was a dream Lagos detox! So how did we end up in this glorious place? A great state department friend from Lagos listened to me whine for months about not wanting to be stuck in Lagos during the summer. It was the middle of the rainy season and most of the kids friends left the country even before school was released. Ben and Dannica would both be working at the consulate and I imagined a summer of trying to entertain 3 restless boys. Sarah was kind enough to listen to my plea and after discussing things with her parents offered the Gordon crew up to house and pet sit for them while they were on summer vacation themselves. Everything aligned just right and we were able to drive to New York a few days after landing in Virginia first to get the kids registered in school. Martha and Jim kindly welcomed us with open arms.

The day we drove from our hotel in Virginia to New York Oliver began to be really ill. Super high fever, muscle aches, delirium, and stomach pains. With Motrin/Tylenol on board we kept the fever to around 101 but I was and hour late giving him his meds when we came back from the market and his fever was 105 and he was completely delirious. Even with medication and cool water his temp didn’t change after 45 minutes so I decided to take him to the doctor. We walked into Urgent Care and they took one look at Oliver and sent us to the Emergency Room. Once there they learned we had come from Africa and put us in masks in isolation until they had confirmed that the wasn’t any ebola in Nigeria. The suspected illness was malaria. Our family was on antimalarial drugs the entire time we were in Nigeria. The last week before we left neither Ben nor myself realized that Olivers daily medicine box had not been refilled and he had neglected to fill it himself. So on our date of departure he had been without antimalarial meds for a period of time when he acquired numerous mosquito bites.Upon departure form Nigeria the health unit had us continue taking our anti-malarial medication for a period of weeks in addition to a second medication. The hospital did not have the immediate ability to run a malarial test and he was already on the two drugs they would have used for treatment so the goal became to keep his temperature down. With staggering Tylenol and Motrin(as I had been doing previously) his temperature was low enough he was discharged. Did Oliver have malaria….who knows. I think he probably did but he was already on treatment so what else was there to be done. We will never know for sure but he loves to tell people he had malaria.

Living in Nigeria meant the older boys didn’t have the option to attend Boy Scout camp with their troop. When we began to plan our time in Upstate New York we decided to look for a scout camp they could attend. About 30 minutes from where we were staying we found Rotary Scout Reservation. Harrison and Everett had a great time and Oliver and I were able to visit them midweek for family night. Oliver was a bit jealous.

Since Oliver didn’t get to go to camp he had Mom Camp. We walked, played in the river, went out for ice cream and most importantly Oliver finally got to practice archery. He has been asking for years and had even been telling people he wanted to own an archery shop when he was all grown up.

We really enjoyed being right next to a stream. It was pretty late in the summer but we made the best of it and tubed/walked as much as we could. The water was glorious and we visited the swimming hole every day to catch frogs and crawdads. Kiva was naughty and chased deer!

We enjoyed the outdoors to the fullest. We visited High Falls .

I loved the variation of mushrooms. Being from the dry southwest I find fungi sprouting up on their own fascinating.

We cared for our hosts’ garden while we were there and enjoyed its bounty. So many fresh vegetables are always a treat but especially after living in Lagos for two years where there were some vegetable options but nothing like this.

When the boys rejoined us after their fun week of camping they too wanted to spend time at the archery range.

We spent a rainy day at the New York State Museum

The kids loved learning about the ancient animals and riding the carousel on the top floor. I was glad they got a better and very visceral understanding of what occurred on September 11th and how it changed things forever.

They really enjoyed the Newsies and it was very professionally done. There had been so much rain they had to pause the show mid through to work on the revolving set. The boys didn’t mind because they just got to run around and eat cotton candy.

This is a fabulous sculpture garden spread over 120 acres. It was hot the day we visited high humidity in the 90’s but we enjoyed it anyways. The sculptures were intriguing and interesting.

Our hosts were so generous they offered to keep Kiva for the next two weeks when we went to Maine. She would have been miserable being boarded and instead she got to run around the acreage with multiple doggie friends. I neglected to get a picture of us all together. We hope to see them again at Christmas time. We all left the area well schooled in the glories of upstate New York.