Dance has been on the menu for the last few weeks for the Gordon household. Every year the Marines through a big ball to commensurate the birthday of the United States Marines. This year was the 242nd year. The event is something many people look forward to all year long and is celebrated at almost every post. Truthfully I wasn’t terribly excited. I would have to dress up, likely in something hot and uncomfortable, and wear heels. My reluctance didn’t last long when I remembered I would have a date with my husband, I could hang out with great friends and we would get a chance to dance. It ended up being a blast. Someone pointed out to me recently that I say that just about everything was a blast, I guess I’m an optimist (if you can actually get me to go to the event *social introvert here*)

The consulate asked some of the teenagers if they would be willing to act as hosts/hostesses in exchange for the chance to attend. Dannica, always looking for an excuse to dress up—where did she come from?— jumped at the chance. There were a few speakers including the US Ambassador to Nigeria visiting from Abuja and some other high ups. Ben had met many of them before and when he introduced me to one the man said “Well done Mr. Gordon!” Never one to turn a compliment away however my feminist self still recoils every time this occurs, which is more often then one might think. It wasn’t so long ago that part of a Foreign Service Officers assessment for promotion included an evaluation of the spouse. Yes, what you looked like and how well you socialized and entertained all influenced your spouses career directly.*Palm meet forehead*

They had a table in the back of the room covered with a black table cloth representing all of the Marines who have given the ultimate sacrifice and could not attend. There was ceremonial cutting of the cake by the oldest and youngest Marines in the room, age 42 and 20 respectively. It ended with a buffet of local and non local food and lots of dancing. We had a fun time and stayed overnight at the hotel for a mini get away from the kids. 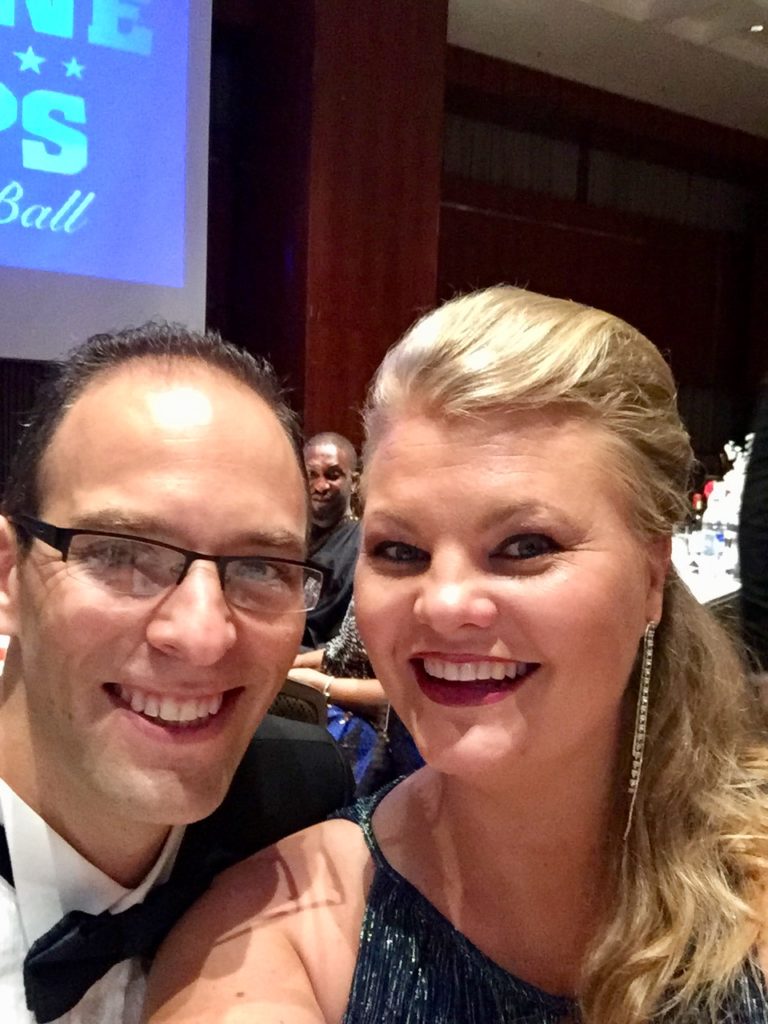 I did my hair myself and everyone assumed I had it done. Glad to know some of my, makeup and hair artist, sister has worn off on me somewhere. 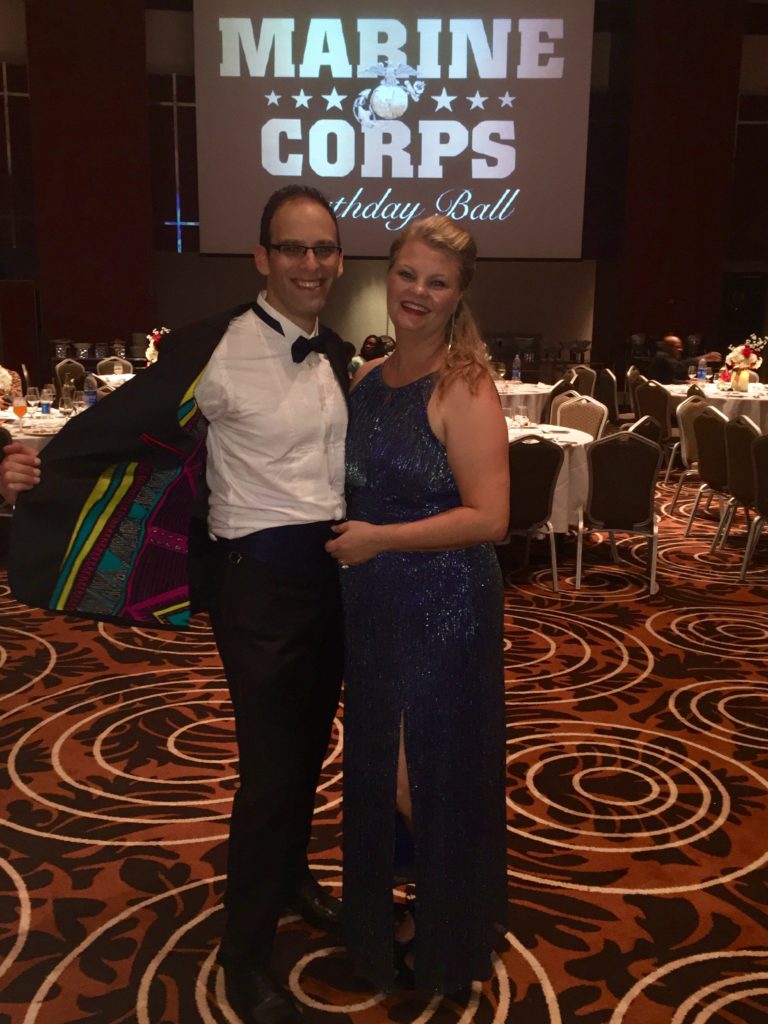 Ben had his tux hand made here. They included a great African fabric lining. 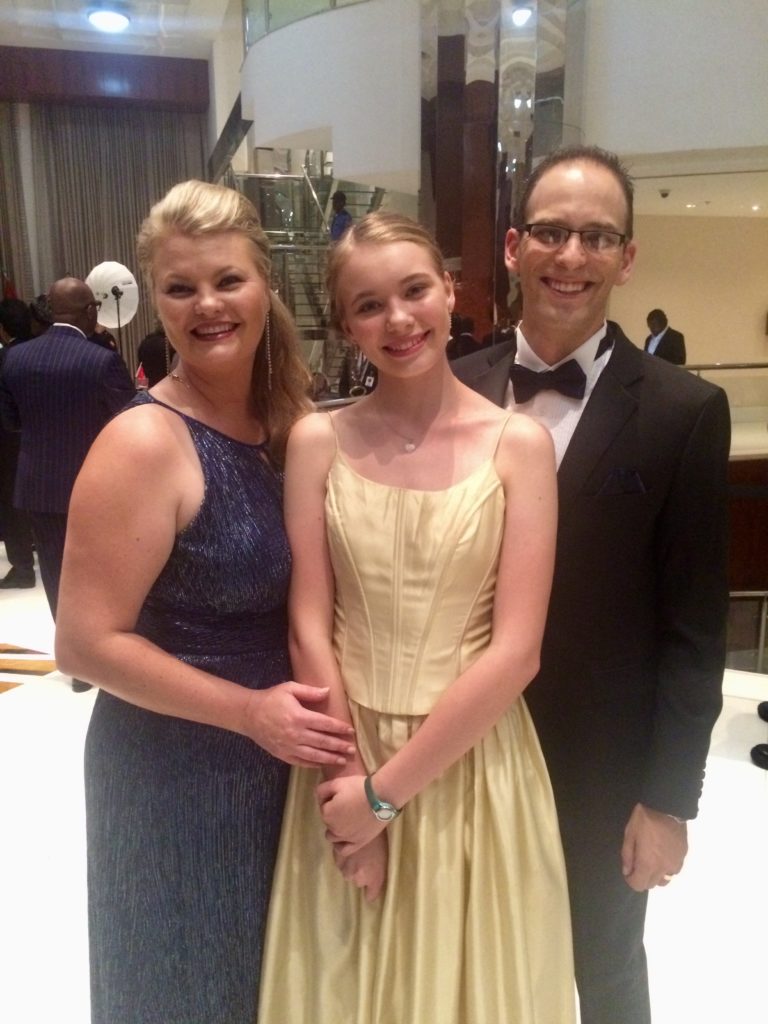 The dress Dannica is wearing was the one my sister wore as a bridesmaid in our wedding 16 years ago. 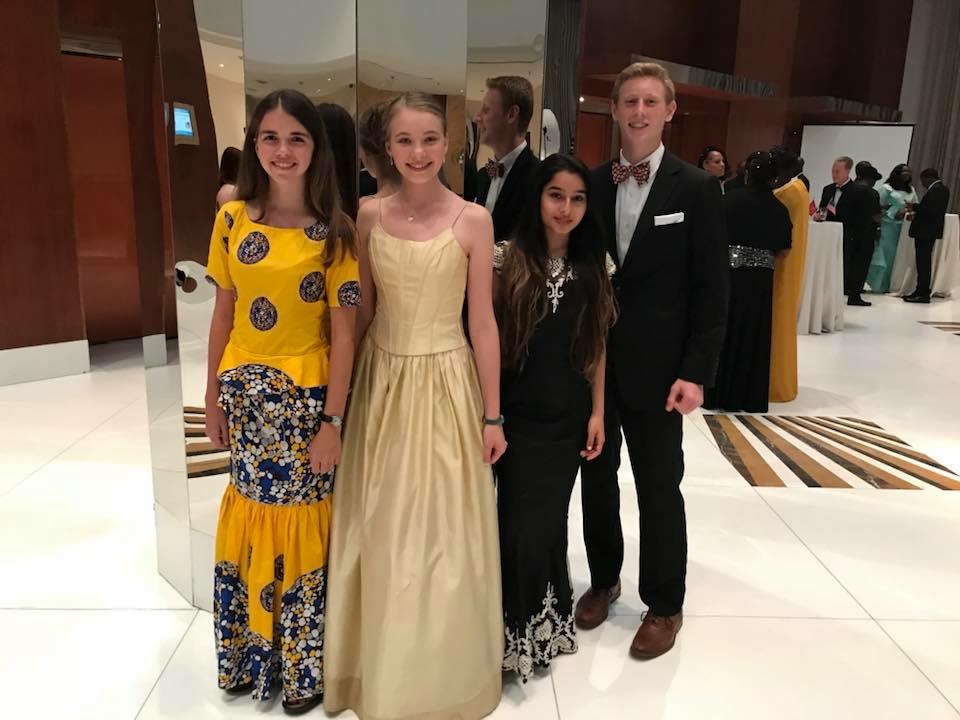 Some of the other teens. 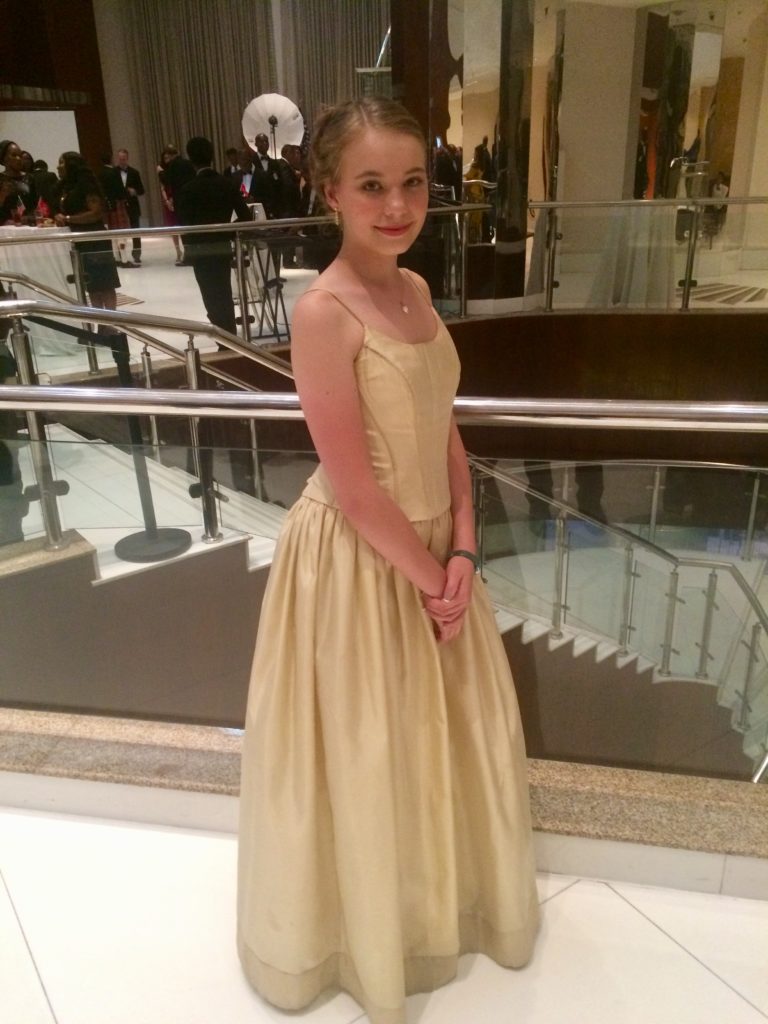 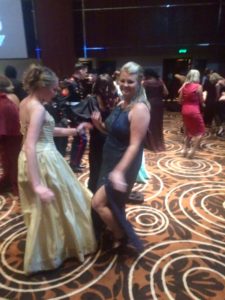 Dannica wasn’t too embarrassed to dance with us. 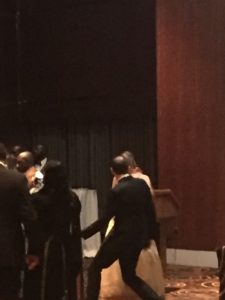 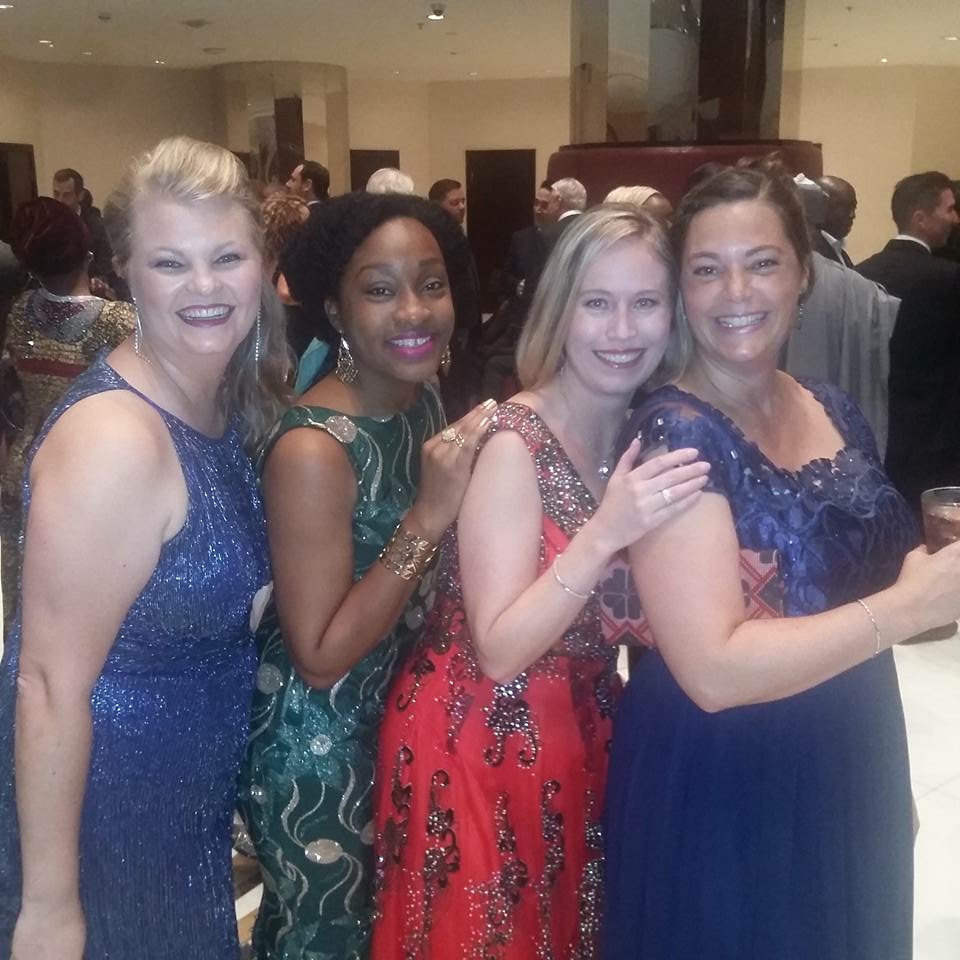 Some of my favorite friends here at post. We have a lot of fun together and I see them literally Every. Single.Day. Because if you look out my patio door I can see right into their apartments. LOL- #fishbowlliving 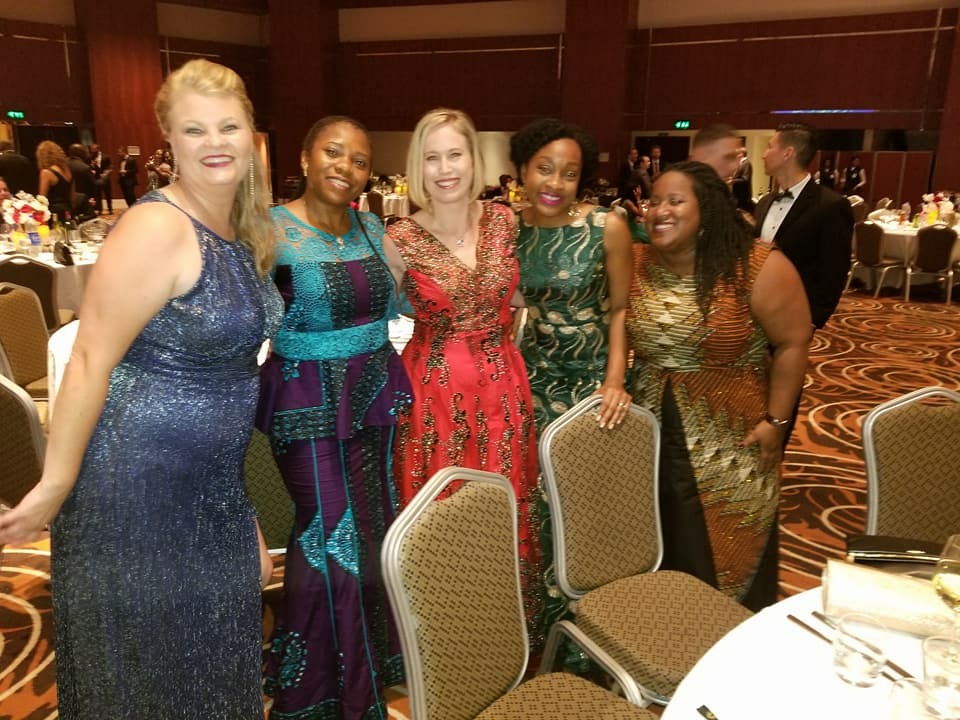 A couple more friends and a representation of some of the dresses made locally. I knew I didn’t want getting a dress made on my plate right after we arrived so I brought something from the States. Next year!

The following week was the Middle School Dance. Harrison and Everett Roger got to attend. I unfortunately don’t have any photos of Roger in attendance but the school counselor sent me this one of Harrison with two of his good friends. 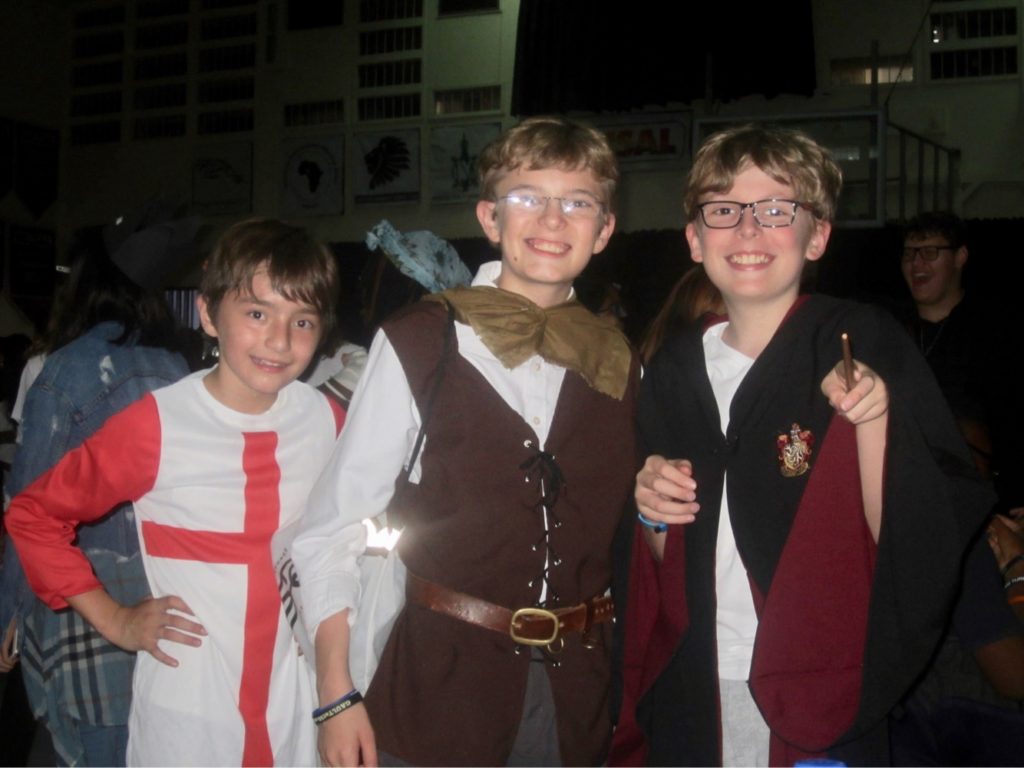 They could be twins and people often get them mixed up on campus.

The following weekend Dannica attended the high school semi-formal with a group of her friends. Ben and I had something the same night so it was a bit crazy getting her there but she was glad she went even though the dance was full of a fair amount of teen drama. She also said the dances were different here. No slow songs at all and many of the songs had choreography that accompanied it that almost everyone but she knew. Kind of like R and B Afrobeat line dancing??? 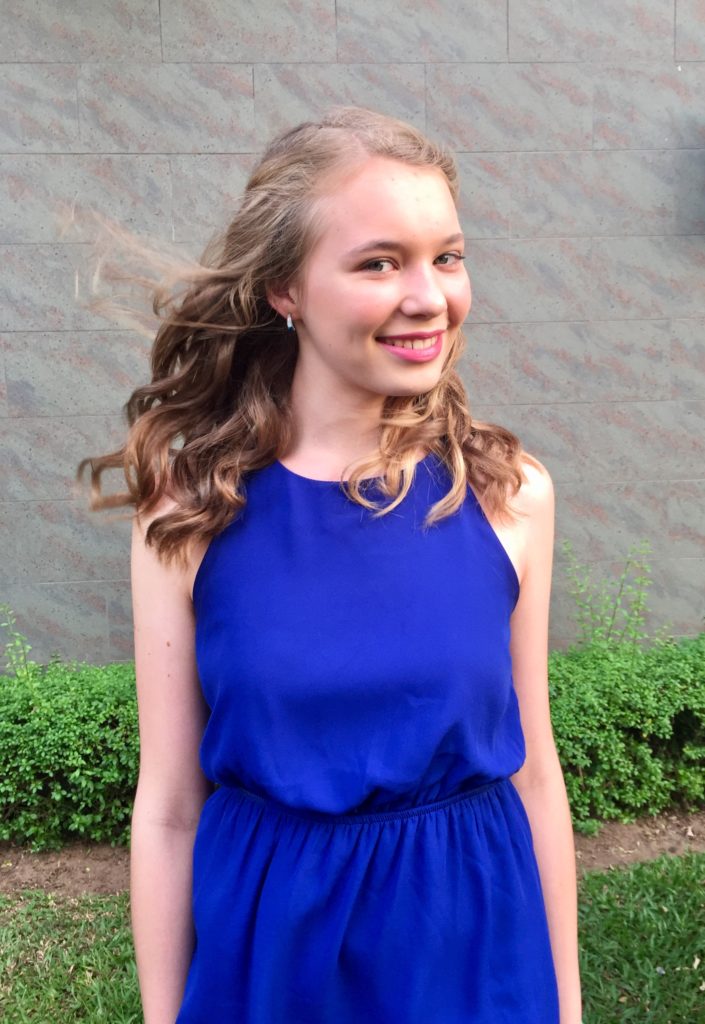 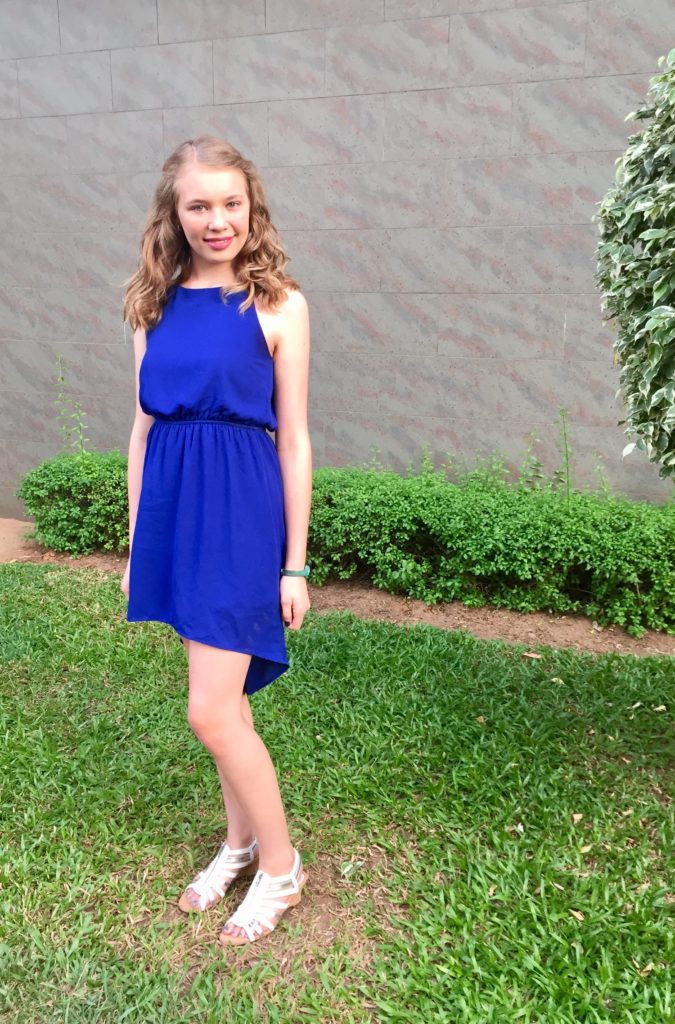 This dress hit her knees last year. She has grown so much. We are officially the same height. Her legs are far longer though, almost as long as her dads, so when we sit I am still taller by an inch or two.

The day of the semi-formal was a busy one for myself as I had volunteered to help out at two different events: The British Womens Club Christmas Charity Bazzar, to be discussed in another post, and the Sail Around the World Cullinary World Tour. 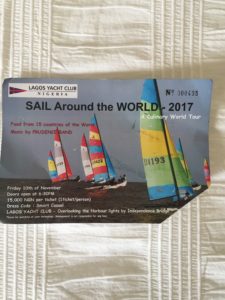 The Lagos Yacht Club held the event. Different booths were set up for countries from all over the world. They served a food or two as well as a drink, most alcoholic some not. Your ticket allowed you unlimited food and beverages. I had volunteered to work at the U.S. booth. My friend Portia and I helped dish up condiments for chili burgers and pour lemonade and whiskey sours. 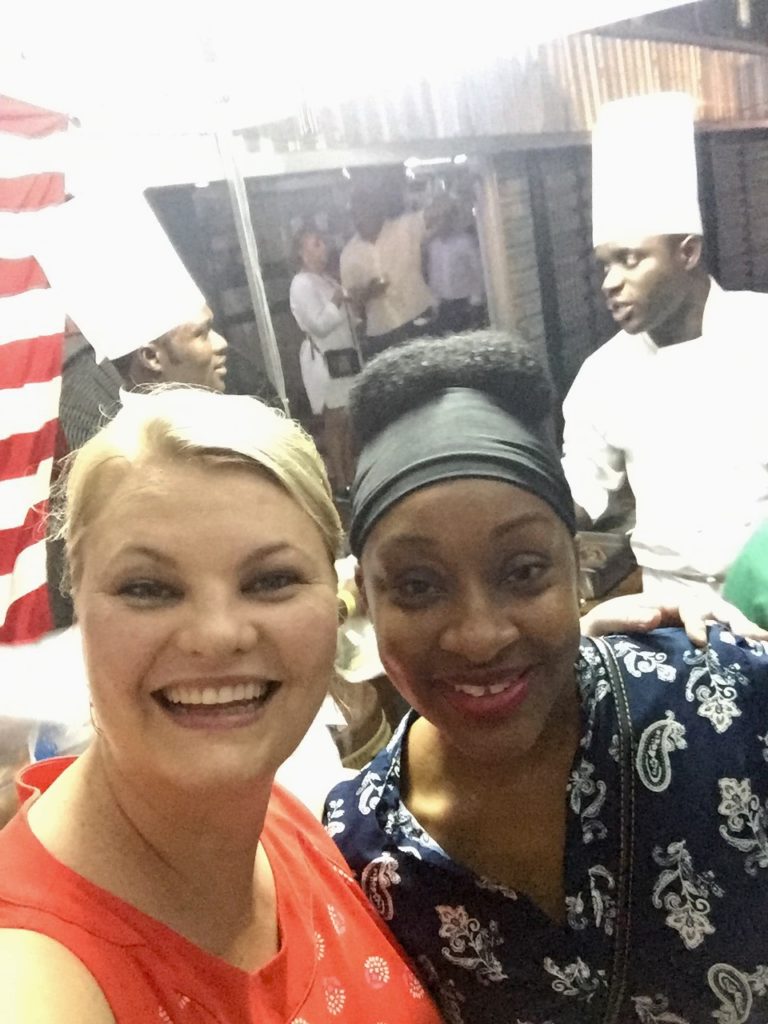 It was so hot and humid. I was dying.

Thanks to the lemonade I was the pregnant ladies and drunk and dehydrated dudes best friend. ” My dear slurring friend, please hydrate with this non alcoholic lemonade!” We had a good time but ended up not helping as much as we intended because we could not get the Nigerian hired chefs and servers to actually go on break. So there were so many of us squished behind the table we finally called it and went to socialize.

I enjoyed a French plate of bread, cured meats and so so much delicious cheese! Oh I miss cheese. The Tai food was excellent. I had a bite or two of Canadian maple pie and Indian food and then I was stuffed. There were at least a dozen other booths. Ben had some good Haggis-google it- evidently if you are going to eat haggis anywhere in the world Lagos is the best place to try it. 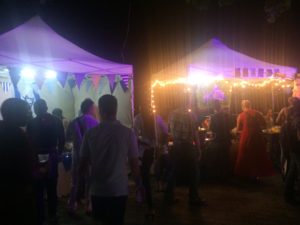 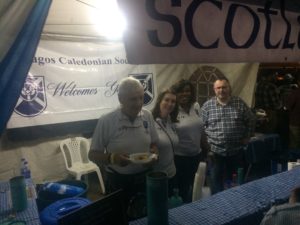 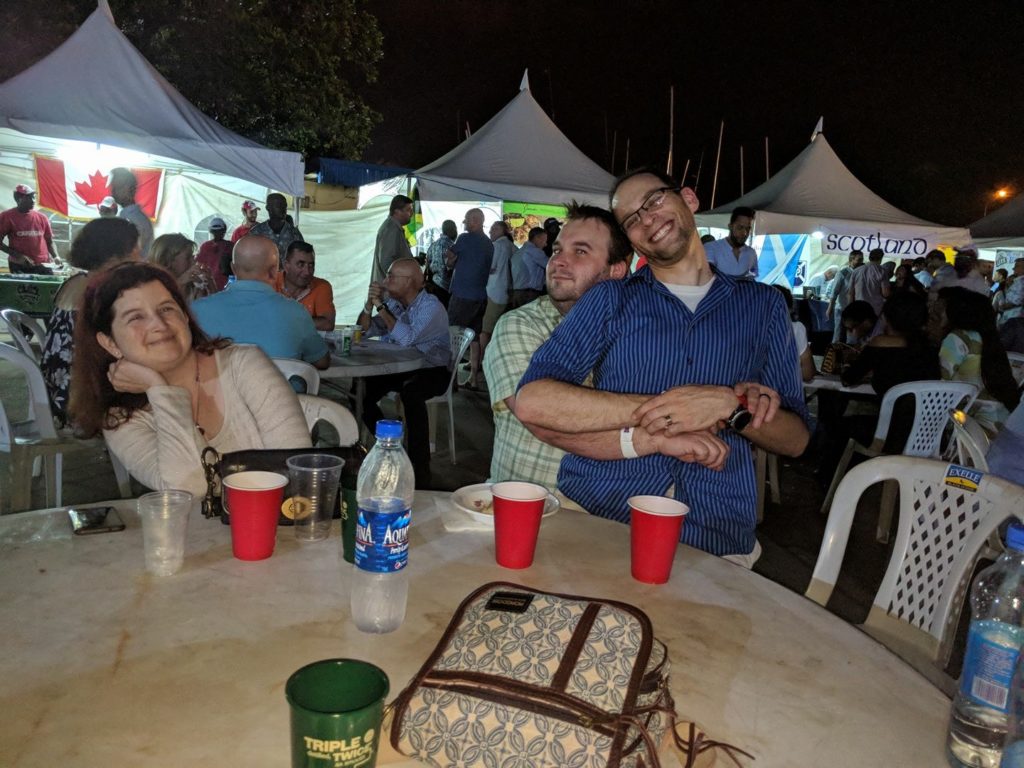 Ben and our friend Paul making fun of us ladies and our selfies.

Around 8:30 they started the music and dancing. We as usual had a blast. We saw others we knew from the community out of the consulate from Cub Scouts and the school. The dance floor looked over the lagoon. 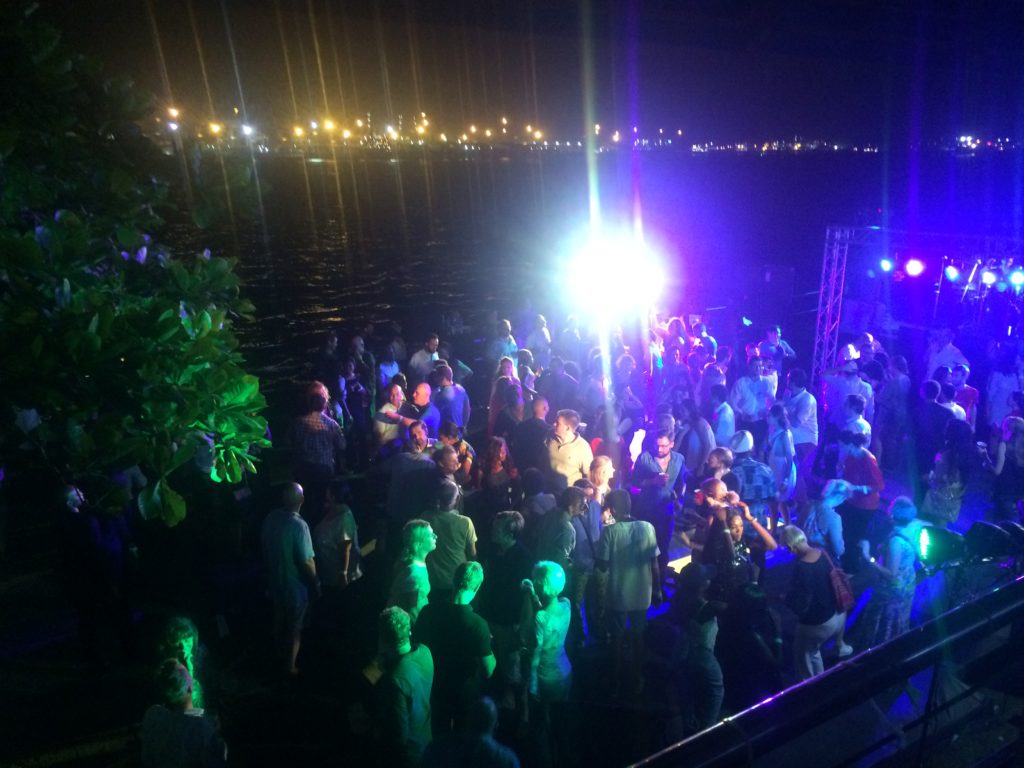 The other dance floor actually flooded when the tide came in. The water looks pretty here at night, but trust me you don’t want to stand in it. 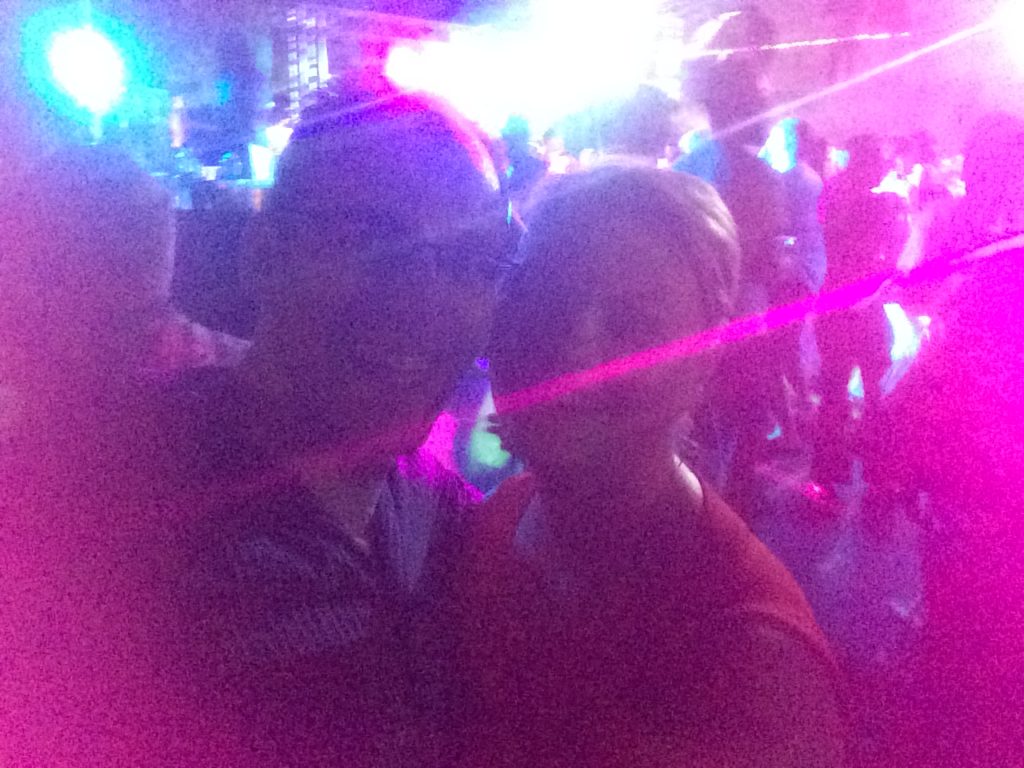 We have so many social event opportunities it feels a bit like being back in college.

Around 10 the abundance of free flowing(and mixing of multiple types) of alcohol started to get to people. One guy puked, causing a chain reaction of at least two others in my very near proximity following suit. I could hear others further away. It was too dark and I couldn’t see what I was stepping on. Dancing was over.

When we were walking back to our shuttle we were accosted by a couple of men who had taken our pictures as we arrived at the event. They then went and got the photos developed and were waiting for us to exit so that they could sell them to us. They were far from flattering, haha, they will not be shared but we did buy them. Another group of men followed us drumming. Their accompanying song “Giiiiiive us some moooooney!” Over and over. I couldn’t stop laughing with their straight forwardness.

Over all a very busy but enjoyable few weeks. I don’t anticipate any dance parties in the very near future but I am learning that almost every event in Lagos ends in dancing so I am working on my Nigerian dance moves just in case.

Check out this dude!