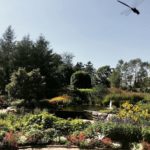 Maine holds a special place in our heart. Ben and I met and began dating between our Junior and Senior years of high school (I should really do a post on that). We were still together after high school graduation and Ben joined my family on a trip to Yosemite National Park and his step dad invited Ben and I to travel to Maine in 1999 and stay in their family cottage and meet his parents. I fell in love at first sight. I had never spent any time on the east coast and not much time further north. I was a desert girl. I was overwhelmed by the beautiful thick forests and brackish tidal estuary rivers. It was my first time sailing and first time clamming. So many great memories.

We were invited back as our family grew. Ben’s stepdad’s parents passed away and his brother tore down the cottage and built a beautiful new cottage in its place. His siblings get use of the property a couple of weeks a year and occasionally they are allowed to invite extended family. We traveled back in 2008 with three kids in tow and again in 2016 while I was in treatment for my thyroid cancer with 4 kids in tow. When we were thinking of someplace we wanted to enjoy time after our return from Africa there was no where else in the US that sounded more relaxing. They generously hosted the boys and I for two weeks in August.

We enjoyed a days excursion at Permaquid Point Lighthouse

I especially enjoyed the very unique geology along the beach. Watch out…so much poison ivy anywhere off the trail.

Of course we had lobster. Now let’s be clear even in Maine lobster isn’t cheap. For years previous we always bought our own and prepared them at home. With just John and I doing the cooking we decided to let someone else prepare them for us. Harrison is a huge fan, Everett and Oliver not as much. Their loss

At John’s recommendation and my eager affirmation we spent a day exploring Costal Maine Botanical Gardens.

They had a great kids section with water features, chicken, vegetable gardens and ponds and treehouses.

Photobombed by a dragonfly, I couldn’t recreate this photo if I tried.

We lucked out and only had two days of rain/fog in the entire two weeks we were there.

John and Everett took the sail boat out every single day. Most days the rest of us joined as well. 21 years into this family and I am still far from being even a competent sailor. Everett passed my skill level already.

The boys leaning into their fate….we are back in the US, no more Margaret and they have to do their own laundry.

My kids have been to, probably 40 museums in their life, including ones with priceless pieces of art in Europe. Never have they been watched as closely as they were at this museum. It was a bit much in my opinion but we enjoyed the work nonetheless.

We especially enjoyed the Wheth Family Exibit. “This exhibition focuses on the Wyeth family works in the Farnsworth collection: N.C. Wyeth, his son Andrew Wyeth and his grandson Jamie Wyeth. But also the painter Carolyn Wyeth, daughter of N. C. Wyeth and Andrew’s sister, who studied with her father and lived in the family home in Chadds Ford all her life. The painters Peter Hurd and Henriette Wyeth Hurd (another of Andrew Wyeth’s sisters) who made a home together in New Mexico, where they established studios at their two-thousand-acre Sentinel Ranch in the hill country of San Patricio. And another of Andrew Wyeth’s sisters, the pianist and composer Ann Wyeth, who married a student of her father, painter John McCoy, and together maintained homes in midcoast Maine and the Brandywine Valley.”

Almost every single day the boys convinced us, without much effort, that we needed ice cream. We visited several local stands but Harbor Ice cream got most of our business.

A few flash back pictures from past trips.

Maine- always a joy and always a sorrow to leave. With all of the changes in our lives and aging family and children who knows the next time we will be able to visit but I am so thankful we got to enjoy its beauty and John, Peter and Adair’s hospitality in 2019.