When I stopped practicing law, I assumed I might not have to read Supreme Court decisions as they came out anymore to see how they would impact my work.  However, it seems that from time to time, the SCOTUS makes decisions which may have a significant impact on my new career.  The past few weeks have offered several cases in point.  My apologies in advance for the legalese I’ll be spouting here, but this mixing of my worlds has me totally geeking out! 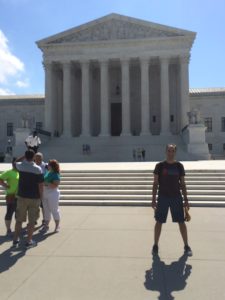 One of the things I love about the Department of State is that it has a healthy attitude toward dissent.  Many of you will have heard of the “dissent channel,” which was created in 1971 by Secretary of State William P. Rogers, which was featured in the news earlier this year.  The Foreign Affairs Manual expressly declares that, “It is Department of State policy that all U.S.  citizen employees, foreign and domestic, be able to express dissenting or alternative views on substantive issues of policy, in a manner which ensures serious, high-level review and response.” 2 FAM 072.  The American Foreign Service Association (AFSA), which is the professional association and labor union for the United States Foreign Service, gives annual “Constructive Dissent Awards [to] recognize Foreign Service members who work constructively within the system to change policy and performance for the better.”  These awards are not necessarily given to officers who have used the dissent channel.  In fact, many of the most constructive dissent actions are done through front channels.

During A-100 we read a cable written by a recipient of AFSA’s award for constructive dissent by an entry level officer.  Due to the fortunes of timing, she happened to be in training at FSI as well, and we got to meet her and hear from her about it.  The Immigration and Nationality Act includes residency or physical presence requirements that US Citizens must have satisfied to be able to transmit their citizenship to their children if born outside the US.  They are complex, varying based on many factors.  For the purposes of this case however, the relevant law applies to an unmarried US Citizen who has a child with a non-citizen.  The unmarried US Citizen parent had to have been physically present in the US for a total of at least 5 years, at least 2 of which had to have been after age 14, to be able to transmit their citizenship.  This time is cumulative, and didn’t have to be continuous.   To make things easier for single moms, congress amended the law so that unmarried US Citizen mothers only needed 365 days of physical presence in the US, but those 365 days had to be continuous.  As with all of these requirements, the burden of proof is on the Citizen seeking to establish that they transmitted their citizenship to their child at birth.  That created problems for many single mothers who lived along the border with Mexico.  There were many instances of US Citizen mothers who happened to give birth in Mexico (had the child been born in the US, it would have been a citizen from birth on that basis alone).  These mothers may have resided in the US for their entire life, and may have had far more than the 5 years of total physical presence that an unmarried US Citizen father would need to have transmitted his citizenship to a child, but because they visited family in Mexico once a month, or even less, or simply because life in the border towns is so fluid and there are no passport stamps for border crossings there, they could not prove 365 days of continuous physical presence, and they were unable to transmit their citizenship.  The cable we read was very well written, it succinctly identified the issue, which appeared to me to be an equal protection issue, and how it impacted US Citizens, and it recommended to the Bureau of Consular Affairs that the issue be brought to the attention of congress.

We spent several days of ConGen learning about the complex transmission requirements and took our test.  The next week, the Supreme Court issued its decision in Sessions v. Morales-Santana.  In that case the appellant had argued that his US Citizen father should have been able to transmit citizenship to him under the 365 continuous rule applicable to mothers rather than the 5/2 years rule applicable to fathers.  The Court held that it did violate the equal protection clause to treat unmarried mothers and fathers differently.  However, as the 365 rule was an exception to the base 5/2 rule, the appellant won a pyrrhic victory, in that the Court voided the exception he sought to have applied to him.

To quote one of my ConGen colleagues, “Everyone lies.  Not all lies are material.”  In this case the Court clarified the law regarding what sort of lie in the naturalization process can void the citizenship of a naturalized citizen.  The reasoning of this case would seem to be applicable to one of the ineligibilities for a visa that we spent a fair amount of time working on in ConGen.  (Putting my home subscription to the Immigration and Nationality Act to use). Section 212(a)(6)(c)(i) provides that “In general.-Any alien who, by fraud or willfully misrepresenting a material fact, seeks to procure (or has sought to procure or has procured) a visa, other documentation, or admission into the United States or other benefit provided under this Act is inadmissible.”  Fortunately for me, at this point of my Foreign Service career, I’m not responsible for determining if this is applicable to cases I deal with.  I now have the attorneys of the Department’s Office of the Legal Advisor to draft guidance for me to follow in applying the law, and the attorneys of the Visa Office to give advisory guidance in specific cases when needed (though, holy cow, a job as an attorney in the Visa Office would be a COOL posting to get at some point).

T0day the Supreme Court announced that it would take up the issue of the temporary travel ban which President Trump imposed through his executive orders, and the injunctions against their enforcement which have been issued by courts in the 9th and 4th circuits.  It appears that the case will be argued sometime in October, so it looks like the Consular space will continue to be an exciting place to watch in the nation’s jurisprudence.  This will be an interesting case, looking at the limits of presidential power and national security, with obvious implications for my work.