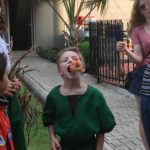 We are now 1/6th of the way through our time in Nigeria!

It feels like it has flown by. We also passed another milestone, our first family birthday. Oliver turned 8! Crazy that my baby it that old.  Birthday parties are a huge deal here in Lagos. If people have any money they spend it. It isn’t uncommon to hire bands, bounce houses, full catered meals and other extravagances for a child’s party. At school it is customary to bring in a baked treat of some kind. Usually they are not home made as buying them from a local expensive European bakery is a status thing. After my last experience of bringing cupcakes to the school-enter no way to transport them, frosting melting off the top, and myself spending 30 minutes with said cupcakes in front of an air conditioner trying to get them solid enough to eat— I opted to send Oliver to school with chocolate chip cookies. They also routinely bring in lunch for the class which tends to be Nigeria fare or fried chicken. On top of the class room treats kids bring in goody bags for their class mates. Not just small plastic sacks filled with balloons, Playdough or candy but large gift bags filled with candy, juice, books, full sized toys etc.

There is  a school rule that if you invite anyone in class to a birthday party everyone must be invited. This works for a small class, Oliver’s has 14 students. My children have been invited to multiple parties since we arrived but due to not having a car and the difficulty of purchasing birthday gifts I hadn’t let them attend any. I should have! I would have known more of what to expect. Oliver wanted a birthday party. Not a big deal except he said he did not want a party until less than a week before his birthday. Thus I did not have time, 3-6 weeks to be exact, to order items from Amazon for said party. So we had to scramble a bit. We found paper plates and silver sparkly Christmas decorations from GAME(see previous post). I was gifted a Happy Birthday banner from someone who left post. I found some balloons and some left over party favors in our wrapping paper box. I thought we were golden, I was wrong. The drama started with Oliver insisting the party be on his actual birthday which won’t work because of after school activities. Then he wanted a Halloween party which wasn’t acceptable because many of his friends can not celebrate Halloween because it is considered a dark holiday. We settled on a costume party but he also wanted people to bring their swim suits so they could swim. I nixed that imagining a dozen kids in costume trying to get into suits and then life guarding that many 8 year olds. Costume party alone it would be. We have a great club house, which we couldn’t use as they were already setting things up for our consulate Halloween Party the following day. No worries my apartment would be big enough, or so I thought. Invitations went out, 14 to his classmates, 5 to his cubscout mates, 5 to families from the consulate. I scheduled it for a Friday afternoon because Saturday we had the before mentioned Halloween Party.  I had a total of 12 RSVP’s. Perfect!

The day of his birthday I prepared snacks and a cake. Oliver had chosen to play Pin the Tail on the Dog, a crepe paper Mission Impossible themed game, Don’t Eat Pete, and the Eat a Doughnut Off of a String Game. Doable for this many in attendance. Ben had ordered doughnuts the day before from a local company that with 24 hours delivers them to your door. My Steward Margaret had asked if we wanted her to work during the party and I agreed that the extra help would be needed, and boy was she needed. Anyone who comes through the compound gate has to be cleared by the guards including their name on a list, talking to us, and if driving in a bomb search of their vehicle. Not uncommon for most compounds here. It took a good 30 minutes for everyone to be allowed in so we were already running late. Kids trickled in over the next hour. Grand total———24 children in attendance! Yeah. As I was frantically back in the kitchen trying to stretch 15 goody bags to 24 I asked Margaret if this was typical. She said ” Yes, you invite 20, get RSVP for 12, 30 will attend!” People left siblings and nannies. Traffic is terrible so many parents stayed as well. I didn’t do an official body count but I am guess we had over 40 people in my living room. The extra adults ended up being so helpful. Go Eat Pete is a fun game and worked will in the large group as I had printed off enough game boards. The Mission Impossible Game and Pin the Tail on the Dog got nixed due to pure number incompatibility. We moved the Doughnut Game outside. Cake and presents. American based presents that made me cringe as he opened them because I knew they cost a small fortune here in Lagos.

Over all the kids had a blast. Oliver had fun but was pretty exhausted and sugared so there was much crying after everyone left that he didn’t get to play all of his party games. I learned so much! They are as followed.

Following you will find some great pictures to document the experience. I don’t have permission from any parents out of the consulate to show their childs faces so you will find happy sticker faces on some of the kids. 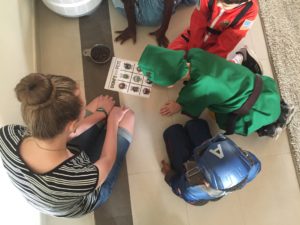 Don’t Eat Pete is a fun but loud game. Having older siblings to help was great. Dannica ran small groups, Harrison was in charge of music, and Roger helped the guards escort people into the compound. 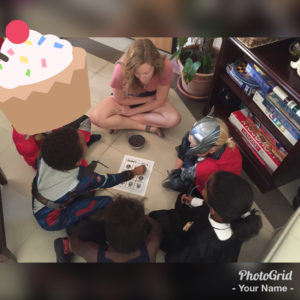 We had such a large group we had 5 games of Don’t Eat Pete happening at once. Thank heavens for helpful parents. 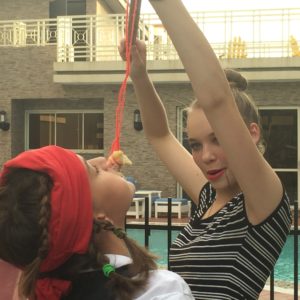 Dannica feeding a hungry pirate a doughnut on a string on a stick. 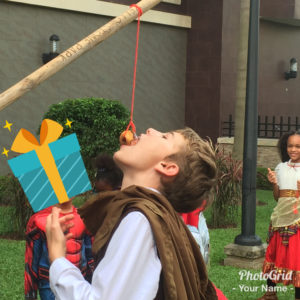 Harrison as we know has a huge mouth. Doughnut gone in two bites. It took most other kids at least 5. 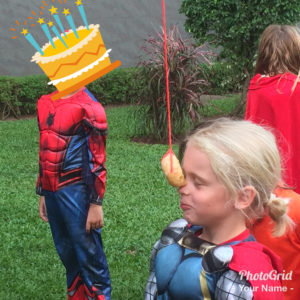 The kids faces were so dirty afterwards. We also had 4 Spidermen and one Spiderlady in attendance. I felt very safe. 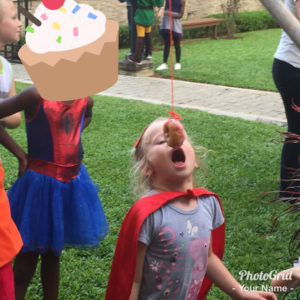 This is one of Olivers closest friends on our compound. They have so much fun together. 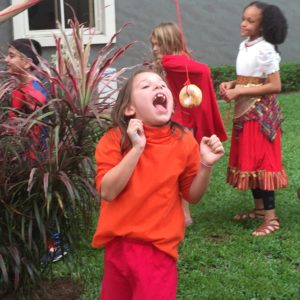 Not afraid to go for it! 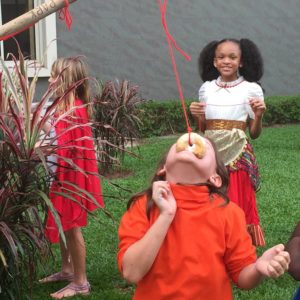 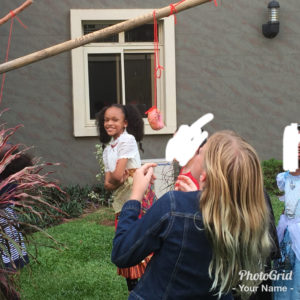 This is a small and close consulate community so kids play with all ages and genders, in that way it reminds me of our old homeschooling community. 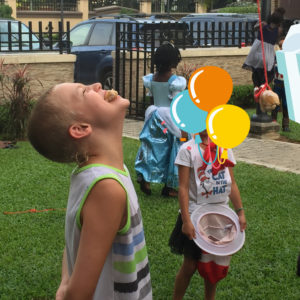 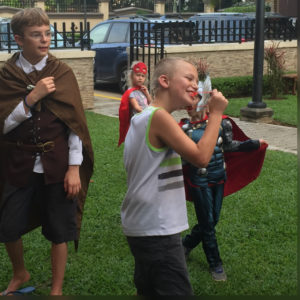 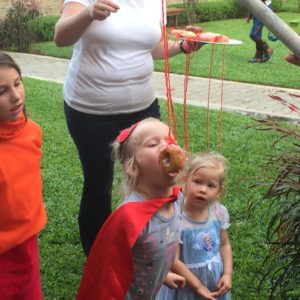 Learning from big sis how it is done. 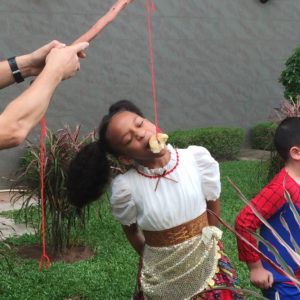 She watched everyone else patiently and learned all the tricks. Her face was perfectly clean. 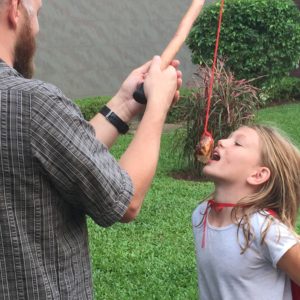 Ugg chocolate doughnut meet white shirt. I wanted only glazed doughnuts but the company refused, you must choose 3 varieties. No exceptions! 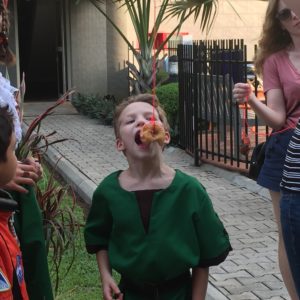 Happy birthday boy! He kept saying “Mom I have the most friends of anyone in the world! “ 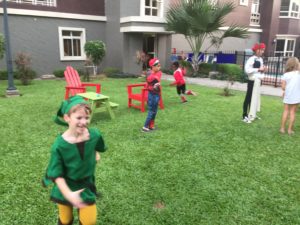 Playing a game waiting for pick up from parents. It is called “Cross Canada”. All kids but one go to one side of a field. The person in charge calls out “All people wearing purple may cross the boarder” and people run and the person tries to tag the child. If caught then they get to be part of border patrol and help catch other people.. “All people with black hair may cross the boarder.” Etc. etc. until there is only one person left then that person just runs and ties to not get caught. I find it a very ironic game considering the whole point of Ben’s job it to help control who crosses US borders and the children practice crossing illegally.

No pictures of cake and candles as there were too many kids faces to sticker out. Between the party and the Halloween one the next day it was non stop sugar at the Gordon household. On a similar note over $200 worth of potential birthday gifts have been purchased from Amazon, our car is near by and may be in our possession soon so hopefully our kids will get to start attending some of these fabulous parties.