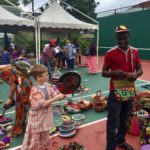 We are fortunate enough for our children to attend an amazing private school here in Lagos. Because Lagos can be a difficult city to live in the school works extra hard to plan wonderful activities for the students. Sunday October 1st is Nigerian Independence Day. They celebrated it today at the school with a great festival. The students were encouraged to dress in Nigerian clothes. When I went to Balogun market a while ago I got some traditional locally dyed fabric that I thought I would use for a table cloth. When I got it home and put it next to the dark cherry style furniture it just looked terrible. I could have saved it for 20-30 years until we left the Foreign Service and had our own dining room table again but I decided that would be a waste. We gave it to a tailor and he made all three boys outfits out of it. Dannica picked up some sparkly pink fabric at a fabric swap in our compound and knew that was what she wanted her dress made of. The tailor also took two other types of cloth purchased at Balogun to make Ben some Nigerian suits to wear to work on weekly traditional dress fridays. The tailors came to our apartment, took everyone’s measurements and the material and went on his way. Nine days later they returned with the finished pieces. The little boys cost about $13 each to have made. Dannica’s and Ben’s were a bit more. Oliver had missed two days of school because of a fever and I wasn’t sure if I would be able to attend the festivities so I insisted on pictures the night before. We love how they turned out.

Ben gets to wear pajamas to work. 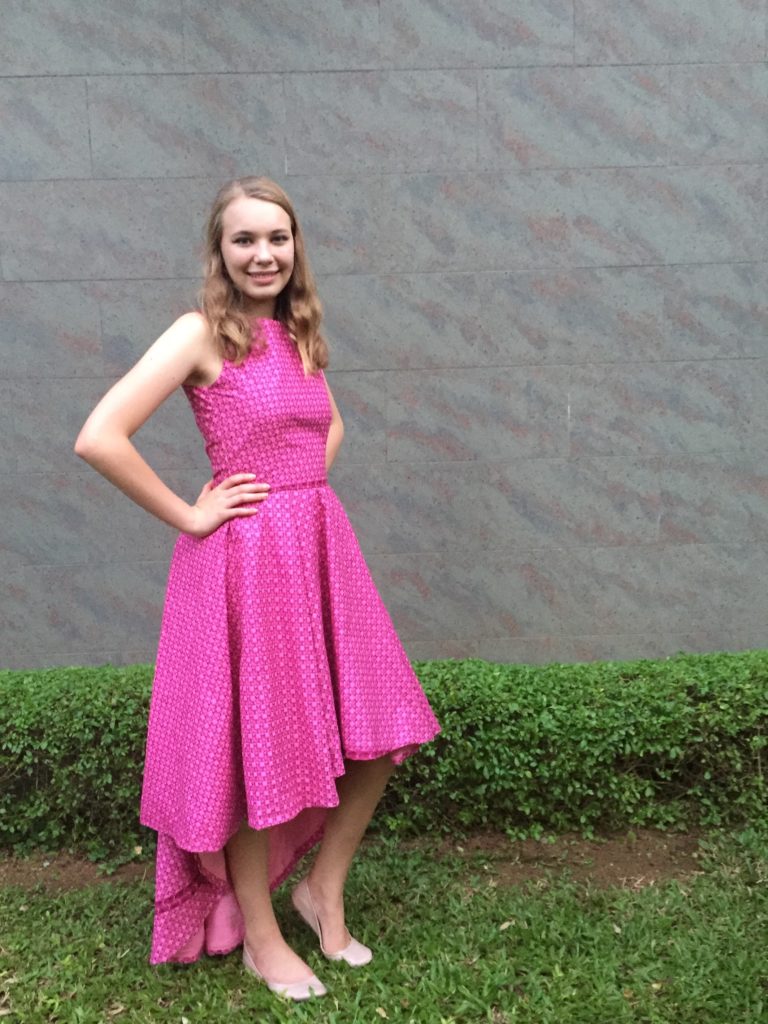 She chose the style herself. 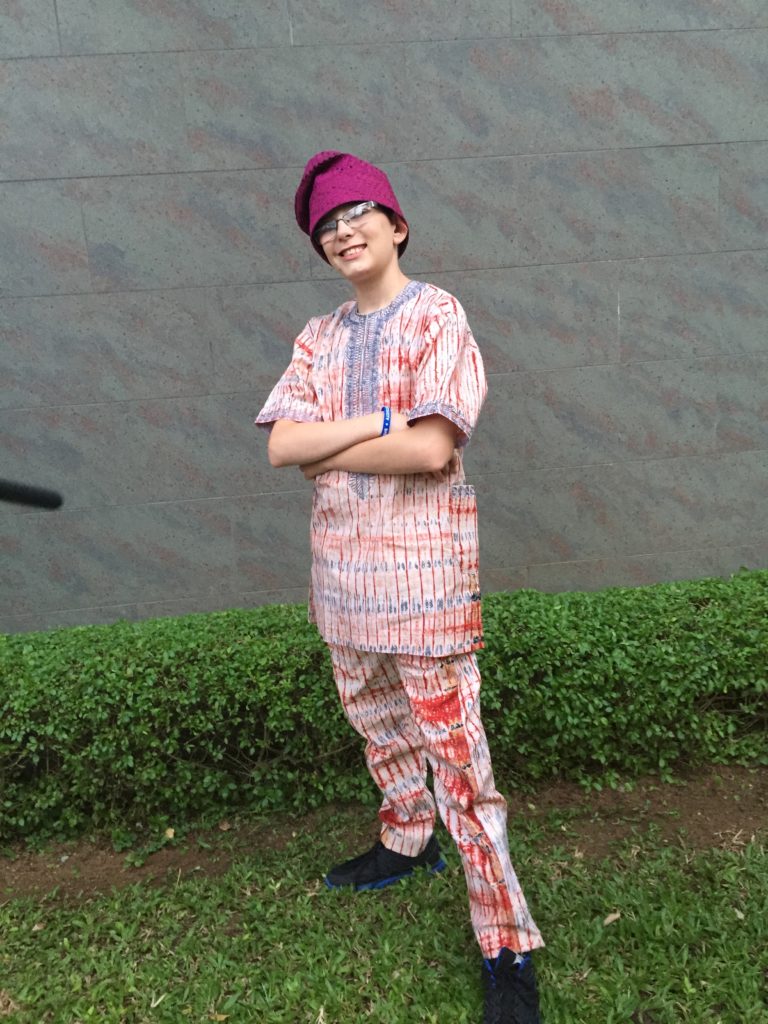 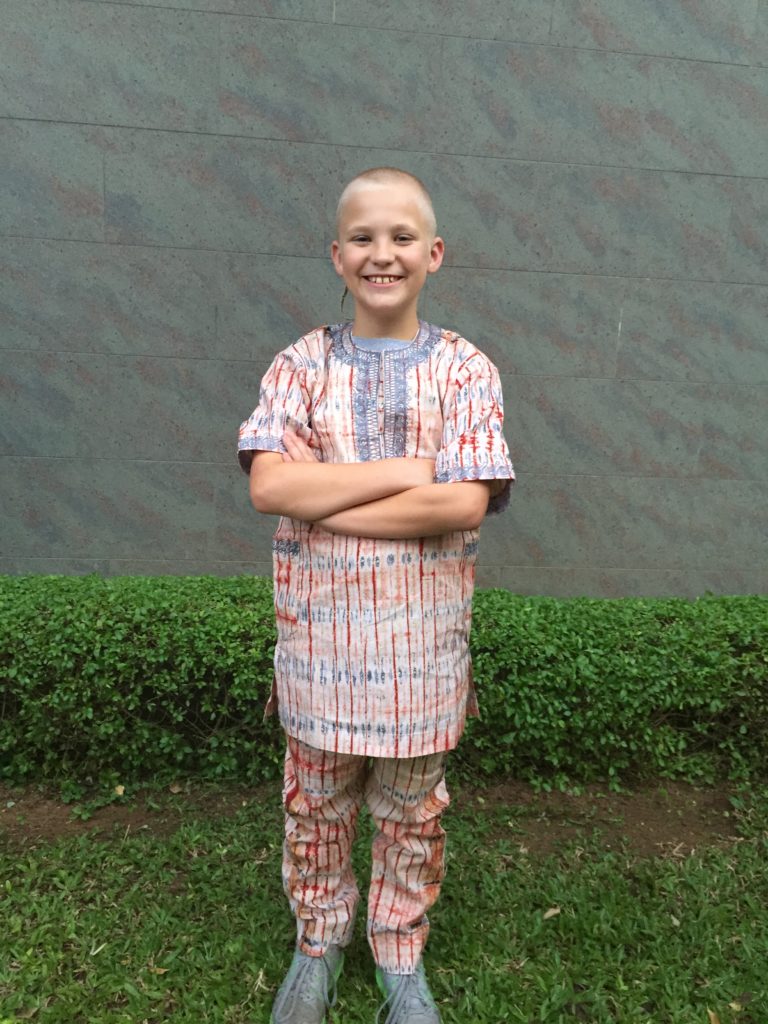 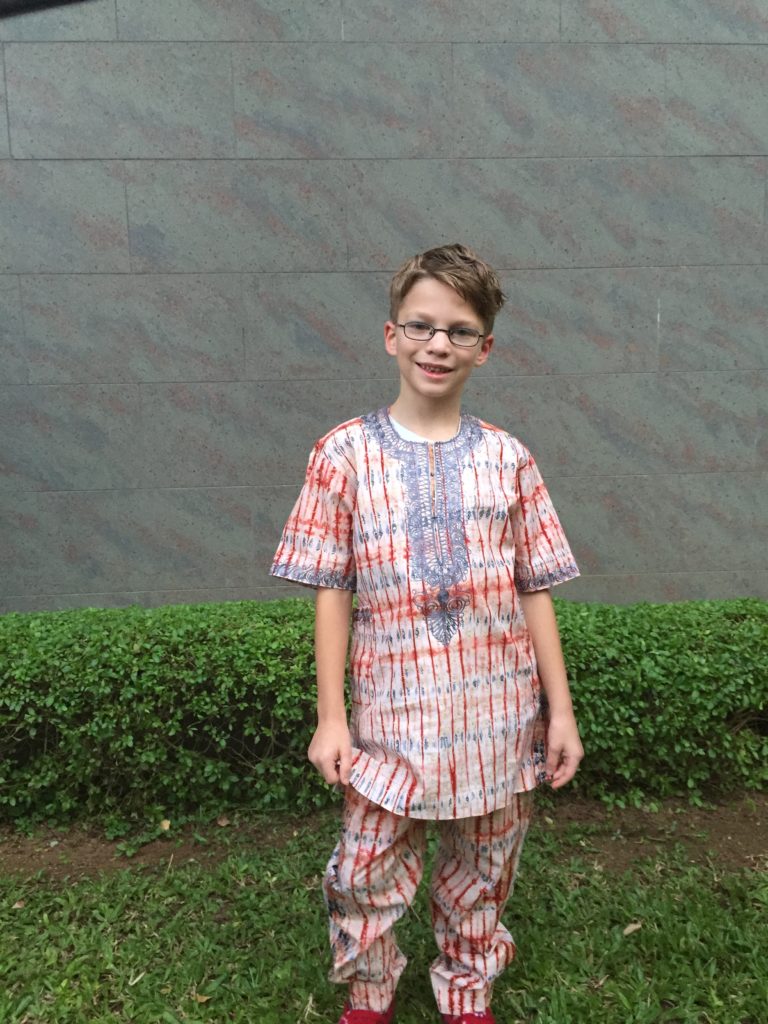 You can see the fever in his eyes. He had refused up until this point to put it on. 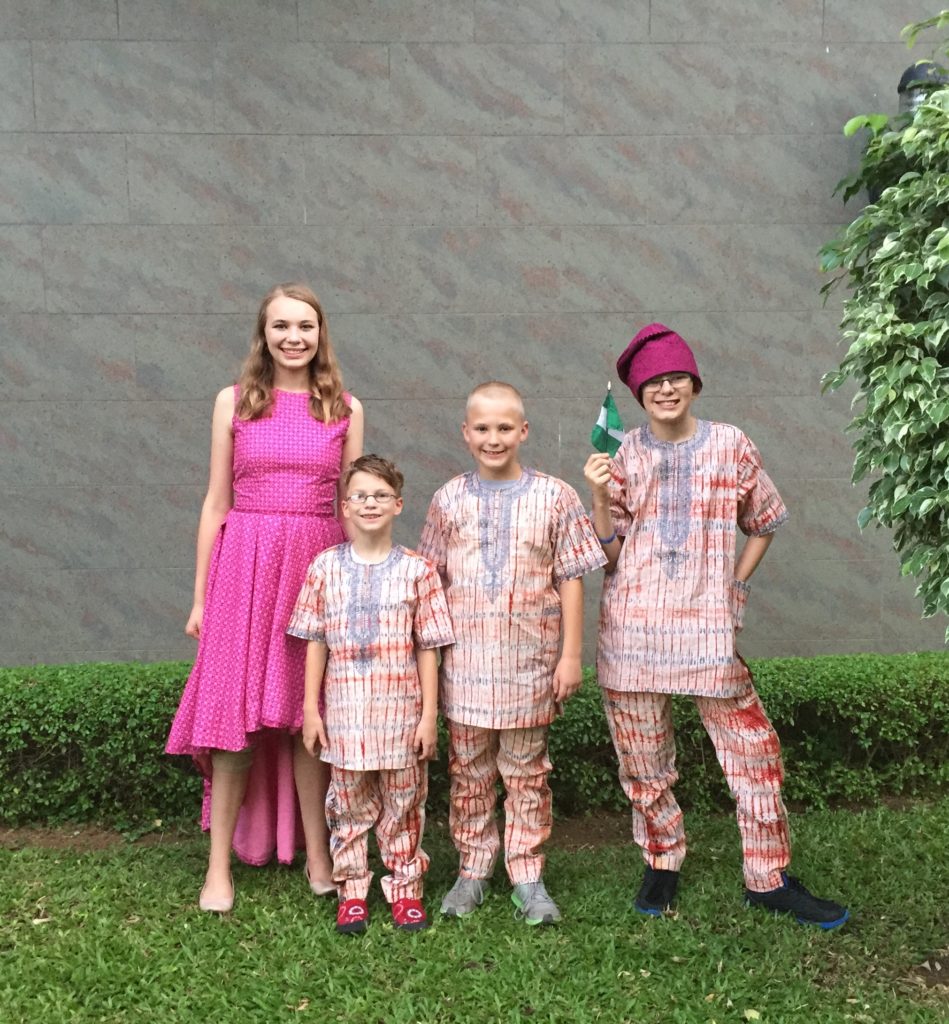 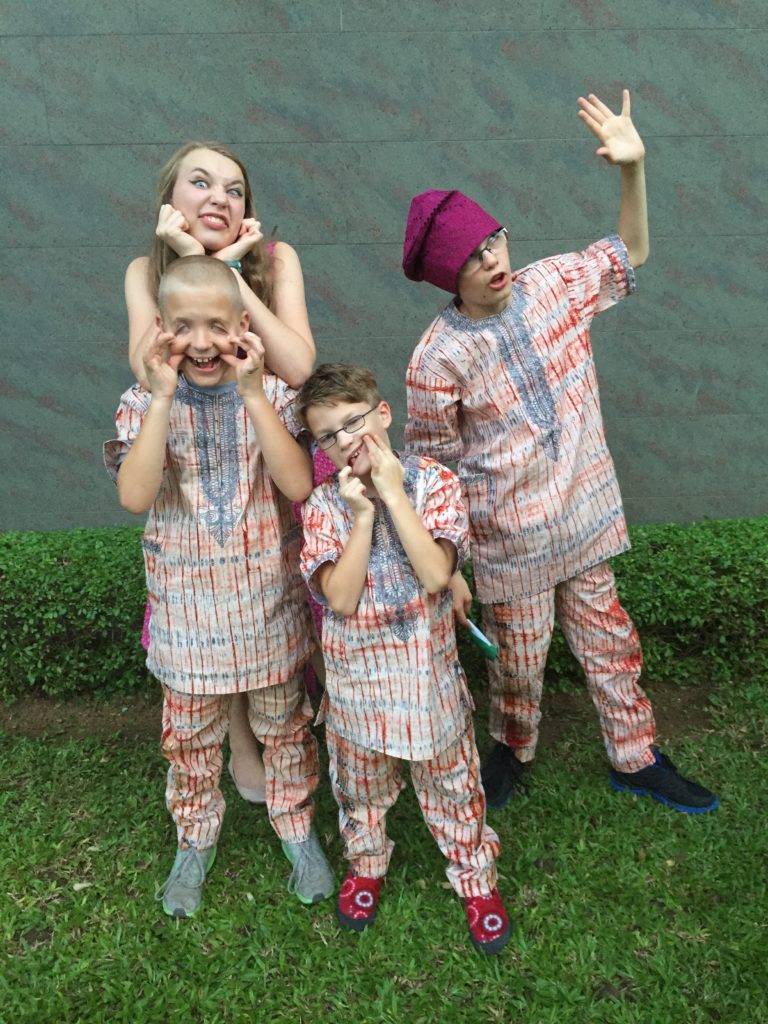 Dannica follows me around the house and makes that face behind my back so when I turn around I scream and tell her how especially attractive she is. Teenagers are really fun.

The day began with an assembly. The band played the Nigerian National Anthem and the kids all sang.

Local dignitaries were presented along with our school board member from the consulate. 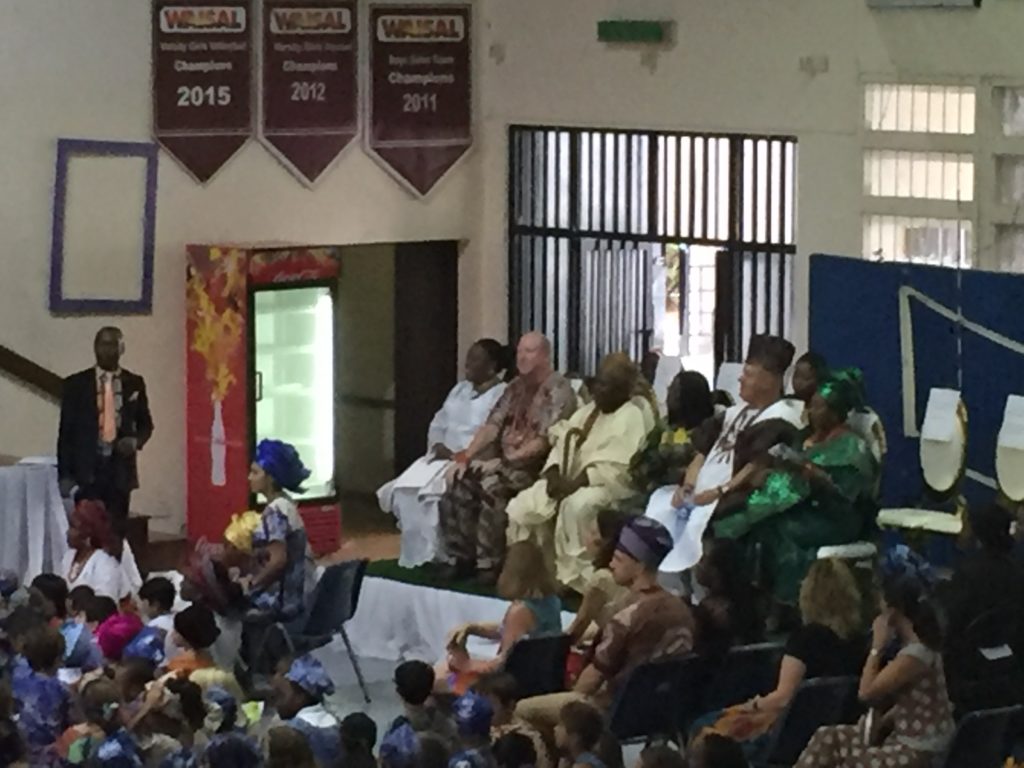 There was a Nigerian dance, song, and fashion show all put on by the kids. Have I mentioned that I love having all my kids are at the same school! They were then excused to go to their classes where they rotated through story time at the library, learning how to dye batik fabric in the art room, learning traditional dances and games, trying Nigerian foods, Q and A’s with local media, TV, and art stars. They had a blast. I am one of Oliver’s room moms so I brought cupcakes. Which in Nigeria is much harder than it looks. I still don’t have my stuff so transporting said cupcakes was difficult. I decided I would need to frost them at the school. It was so hot though the frosting was sliding off the cupcakes. So we had to prechill them all by putting them in front of an air conditioner first. The things we do for our kids. 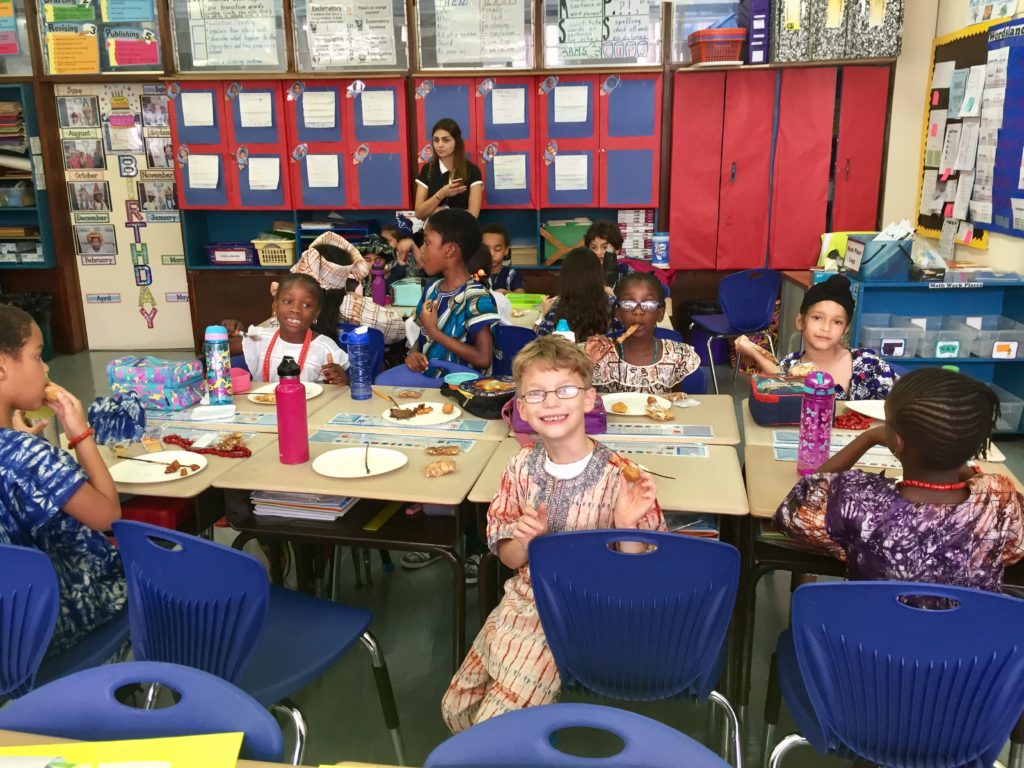 I admit it. I drugged him with Motrin so he could go to school. He was so sad thinking he would have to miss it. I love that he only has 14 students in his class. 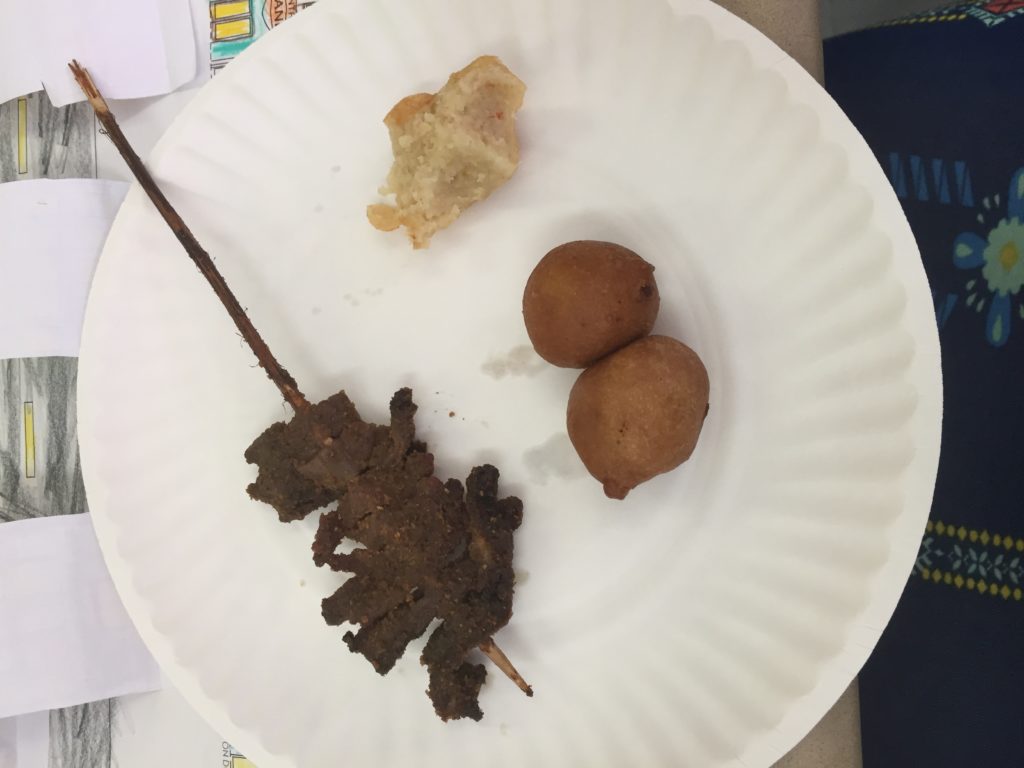 Suya- spicy beef jerky on a stick, something made with kasava and peppers and deef fried?, and puff-puff-a very sturdy and only slightly sweet doughnut 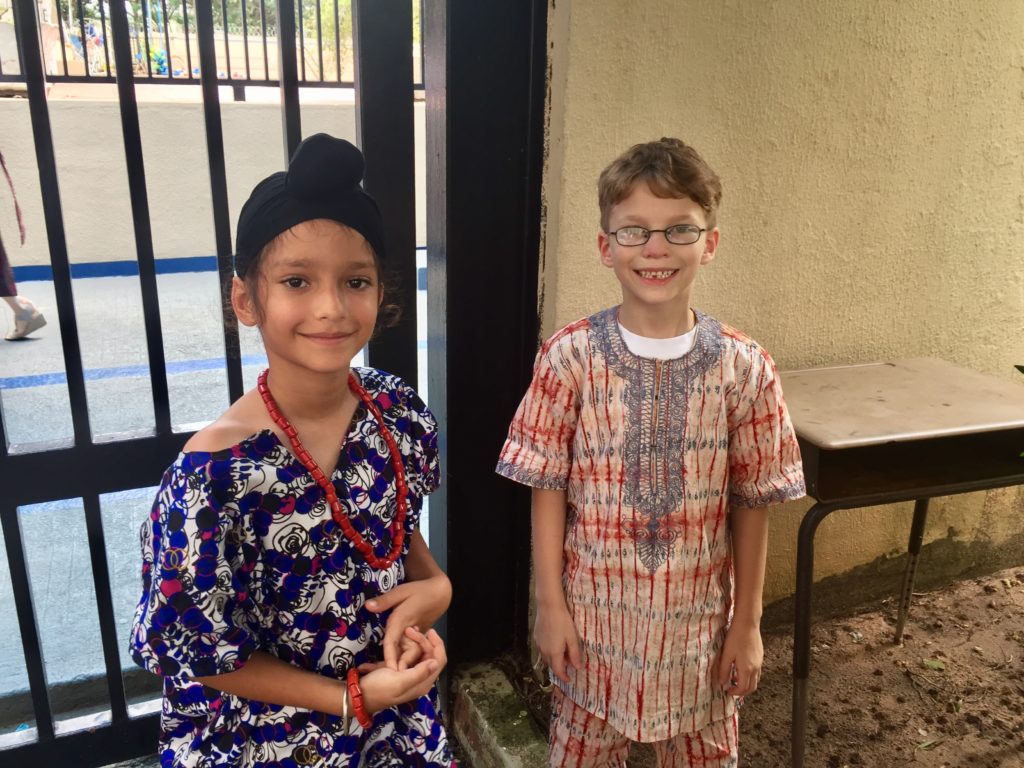 Oliver with his BFF, he is a great kid and they have fun together

In the center court yard there was food, music and dancing. Did I mention there was dancing?

This dance represents men and women fishing and gathering water together.

When the dancers in the white costumes entered the assembly a bunch of the preschoolers broke into tears and had to be taken out by their teachers. Can you blame them? So what is the deal? Unique to Lagos is the Eyo Festival, today it is a tourist event, but its roots date back to 1854 where it’s traditionally performed on Lagos Island. The word ‘Eyo’ refers to the costumed dancers, known as masquerades. Covered in a white sheet from head to toe, they are entirely clothed in white with a brightly colored hat and hold a long bamboo pole covered in white and red pom poms. The masquerades perform a play, representing spirits of the dead. On Eyo day roads are closed where the procession parades and spectators take off their shoes as a sign of respect. It takes place whenever occasion and tradition demand, such as the final celebrations when a highly regarded chief is buried. The festival moves to the beat of drums and traditional dancing.

It was great to watch. They turned the whole tennis and basket ball court area into a large bazaar where the kids could buy trinkets and gifts for the holidays. The merchants had a limit of how much they could ask for knowing they were working with little kids. The most they were supposed to ask was around 1,500 naira, or about $4 USD. I got to take them each around and help identify gifts their siblings and family members might want and watch them practice their bartering skills. Be prepared for some “extra special” gifts from Nigeria, family, I could only have so much influence before the intrigue of all things shiny took over. 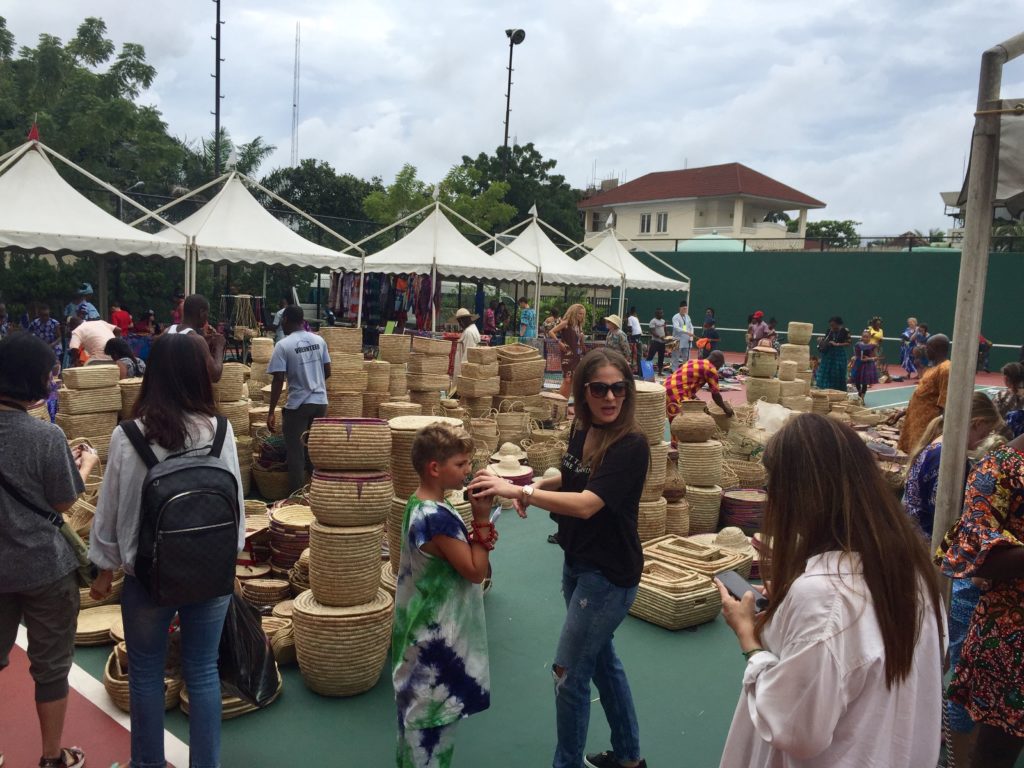 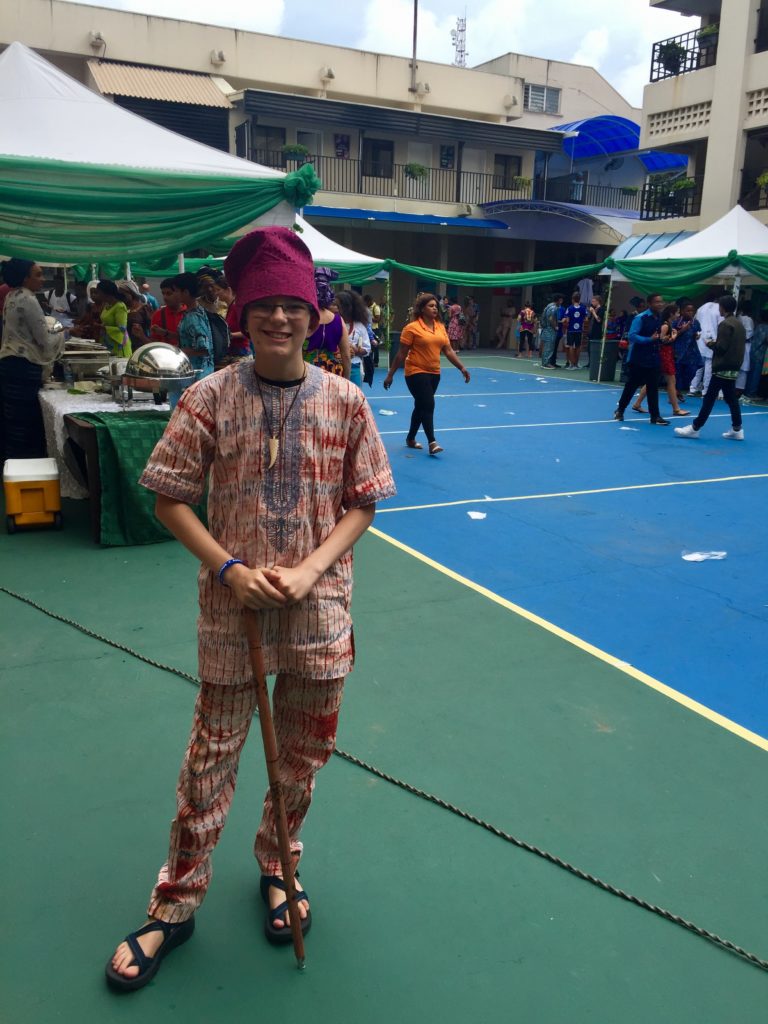 Harrison bought a new cane. His last was lost in Virginia. Because all 12 year old boys love canes, right? 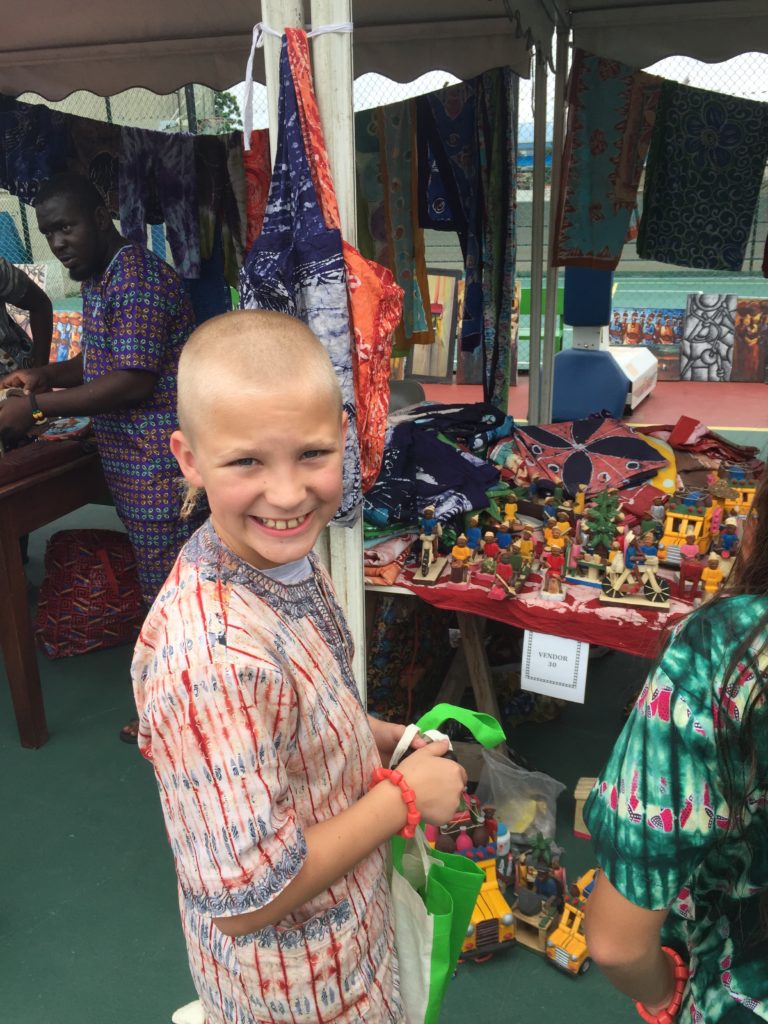 Everett Roger has a really hard time with the direct sunlight here, he is always squinting. 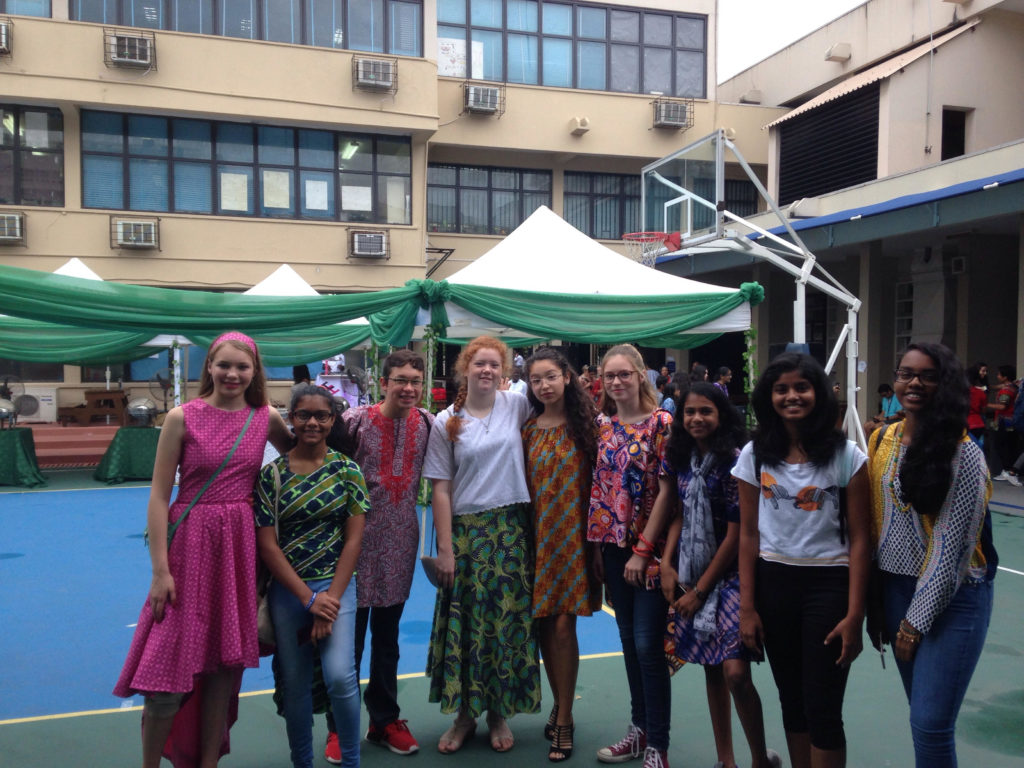 Danni with some of her great friends. 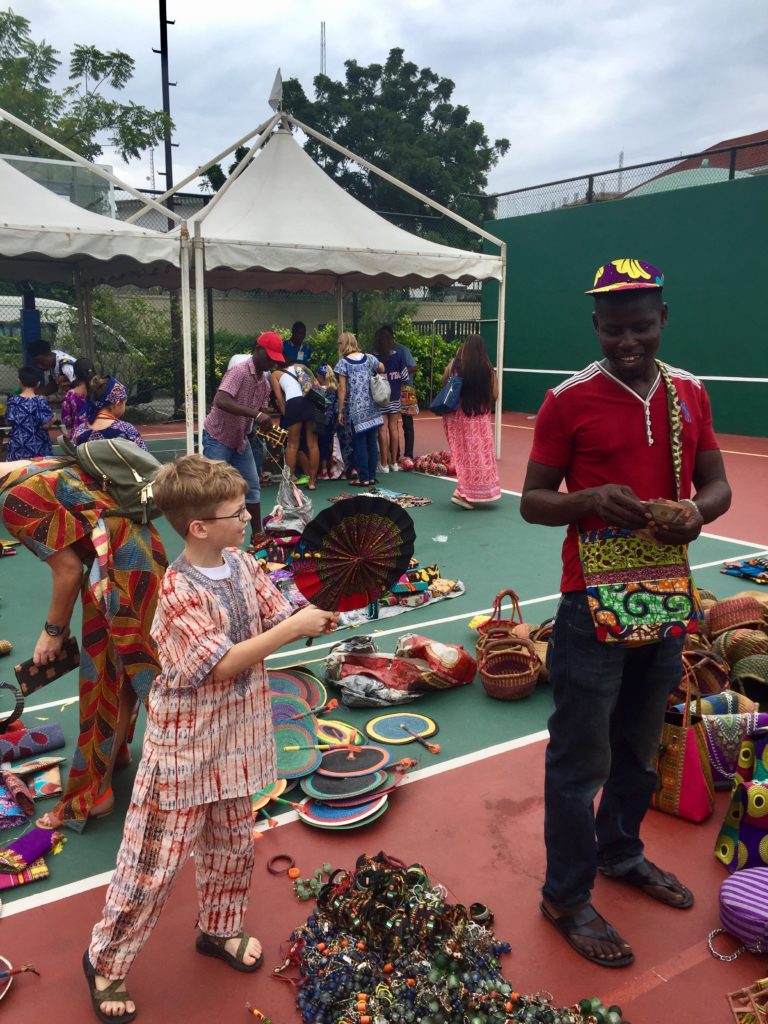 King of the Hustle goes to Oliver. I watched this guy sell fabric and leather fans all day and I never once saw him drop his price, until Ollie smiled at him. 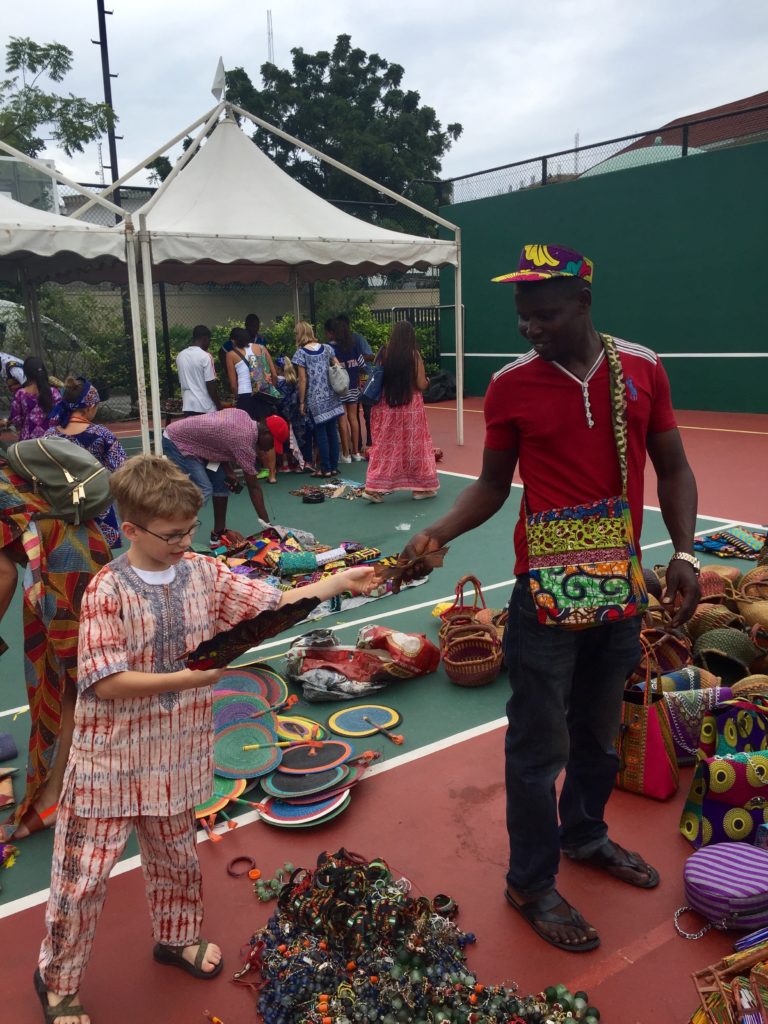 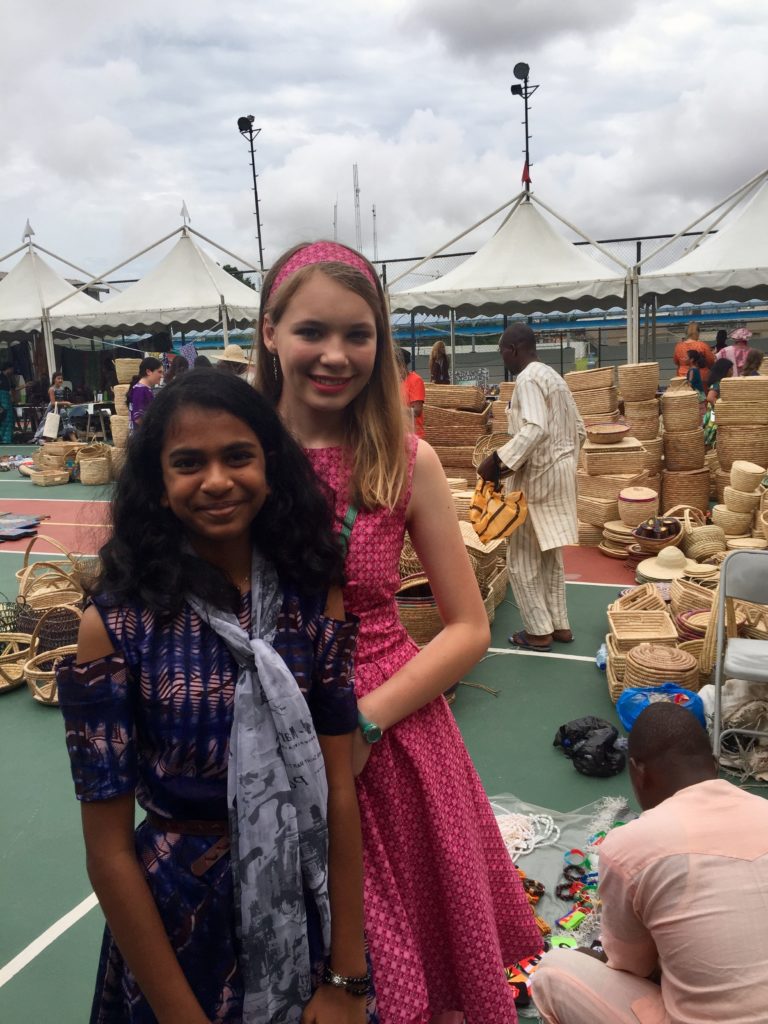 It was a great day with lovely people. We came home exhausted and already looking forward to next year.