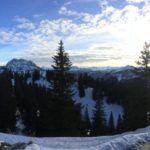 Two years ago, back before this life of living abroad began, my children made some friends. Our home in Utah backed against National Forest. It was lovely. So much clean land to explore with red rocks, wildlife and flowing water. One day after the kids had gone out to play they came home excited that they had made some friends who lived in a bus. I was a bit confused and mildly concerned. Oliver wanted to invite the new friends over to play so I accompanied him to go meet his new friends. They were a German family taking a year to travel around Canada, the US and Mexico in a converted school bus. They had done a similar trip around Eastern Europe and Asia a couple of years earlier. Heike and Tom along with their two daughters, Paula age 7 and Emma age 10, and their dog published books sharing their escapades along with helpful tips for others craving a similar adventure. We liked them immediately and they spoke english well enough to have a lovely conversation. We invited them for coffee and tea the next day. We enjoyed their visit and learning more about their lives abroad and at home in Germany. The kids continued to play together for the week that followed.

Unfortunately they had to move on to visit other beautiful places in the US Southwest. They had a lovely time but the girls kept requesting to come visit us for Christmas so we were so happy when they returned to our neck of the woods. We had them over for Christmas breakfast and enjoyed each others company not knowing if we would see each other again.

Heike and I kept in touch on Facebook and I followed her blog www.weltenbummler-praschel.de  anxiously awaiting the publishing of their next book. Fast forward 3 years….Ben and I were discussing spending December 2018 in Europe somewhere with snow but not too cold, somewhere with Christmas markets, somewhere with a shorter flight and only one connection and Germany and Austria was the perfect fit. I contacted Heike right away to let her know we would be in her neck of the woods. Happily she said they were anxious to meet up and show us some of their beautiful country.

On December 28th we parted ways with the rest of the family leaving beautiful Vienna and headed back toward Germany. Our destination was a small community about 70 minutes out of Munich called Lechbruck am See. We hoped to make it in time for dinner but it got too late so we stopped for dinner. Nothing like trying to read a Thai menu in German. Google Translate was not much help, But I found Pad Thai so all was well. (they also took pity on us and brought us an english language menu)

As soon as we arrived the kids got awkwardly reacquainted. 3 years is a very long time in kid time. They asked if we wanted to attend a a bonfire. We followed them outside and they lit torches and handed them out to the kids. They were beyond ecstatic! Fire!

Everyone was burning large logs and there was music being played by alphorns. I had never heard them before. It was a bit unreal.

The first day after we arrived the kids were eager to expend some energy with out being out in the cold. Heike recommended a store that offered a unique experience. The entire top portion of a huge outdoor store, think REI, was turned into a rope course. It covered two stores and even included a huge outdoor zip line. You paid about $10 per person to use the course however if you purchased anything they took the cost off your total. They had employees to help the kids so the parents could just shop and enjoy a cup of coffee in peace. The boys were in heaven. I allowed Dannica to play the teenager card and hang out in the car and charge her phone. Ben and I shopped. Outdoor stores are weaknesses of ours and the store’s plan was genius! We did purchase a couple of items but with limited suitcases we probably left with far less than their usual customer.

We continued our afternoon taking a little drive through Bavaria (yeah like Bavarian cream!). We decided we wanted to drive by Neuschwanstein Castle but ultimately decided not to go in for a tour. Castles are lovely but they are also packed with people and if you haven’t noticed the main focus of this trip was to spend some time not packed close to people all the time like we are in Lagos. The castle is beautiful and majestic.

After a roadside lunch we of delicious bread that had so many seeds and nuts pressed into the crust that you had to eat it over a napkin as to not be covered we headed up the mountain. Have I mentioned that I miss having a variety of breads available to us in Nigeria. The majority of breads are very very white with cassava flour added giving it a different taste and texture and making toasting difficult. It is either just bread or burned. Anyways, back to beautiful mountains, we chose to take a cable car to the top of the mountain range. It was insanely steep and the pictures from the top really don’t do it justice. The weather was cold and crisp.

We enjoyed watching paragliders cary up their gear and take off from the top of the mountain. Not something I am interested in at all but beautiful to watch.

Heike and Gabi pampered us with delicious food. Here is home made avocado yogurt which was simply scrumptious! Oh dairy how I miss you.

The kids were especially fond of this huge tray of apple strudel. It was all consumed.

We are so happy we took to time to meet up with our old friends. It was the perfect wrap up to an extraordinary few weeks spent surrounded by those we love. Germany, Austria and Slovakia were full of friendly people and spectacular countryside. We would visit(or bid) here again in a heartbeat.