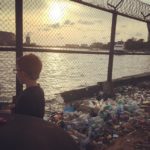 It has been an eventful spring. It is the dry season here in Nigeria. The dreaded sand filled skies of Harmattan have left us and we are left with warm sunny days. Day to day life is filled with mundane and exciting adventure, which is how life should be. Below you will find a brief glimpse into the last few months. 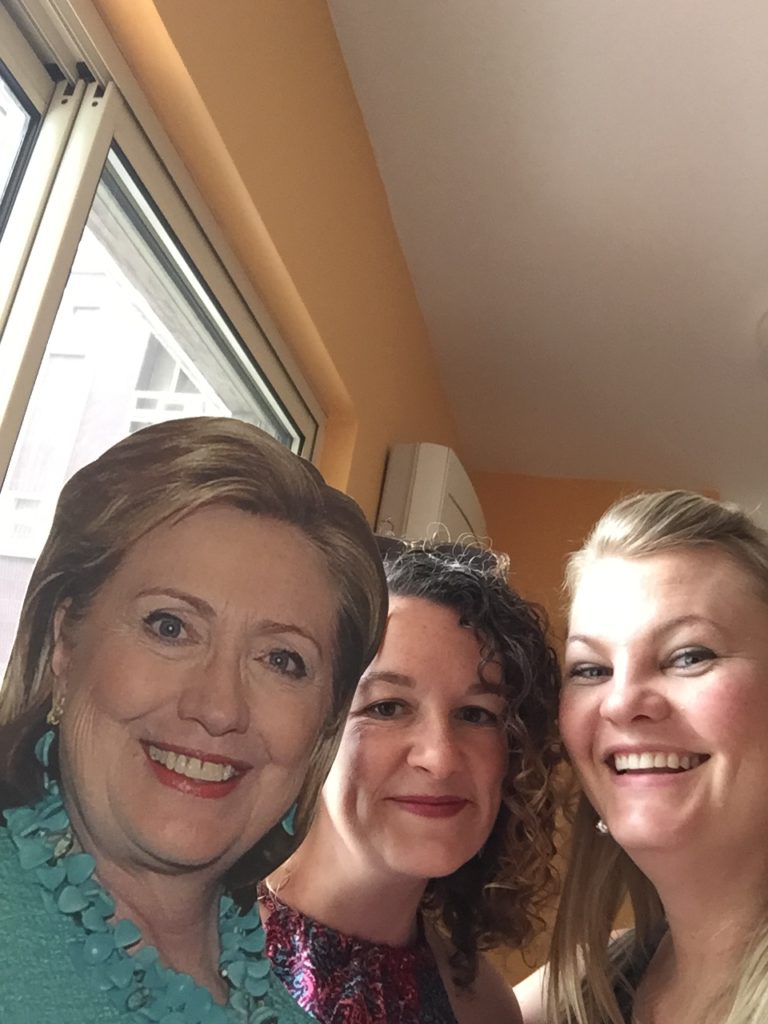 We spend a lot of time with friends and co-workers. They are the best thing about this post. We had a great meeting on the day of the second annual women’s march. Lots of discussion over how how we can make a difference, support equal rights, empower women, and be involved in our nations politics even a continent away. My friend Brianna brought her friend Hillary to join in on the fun. 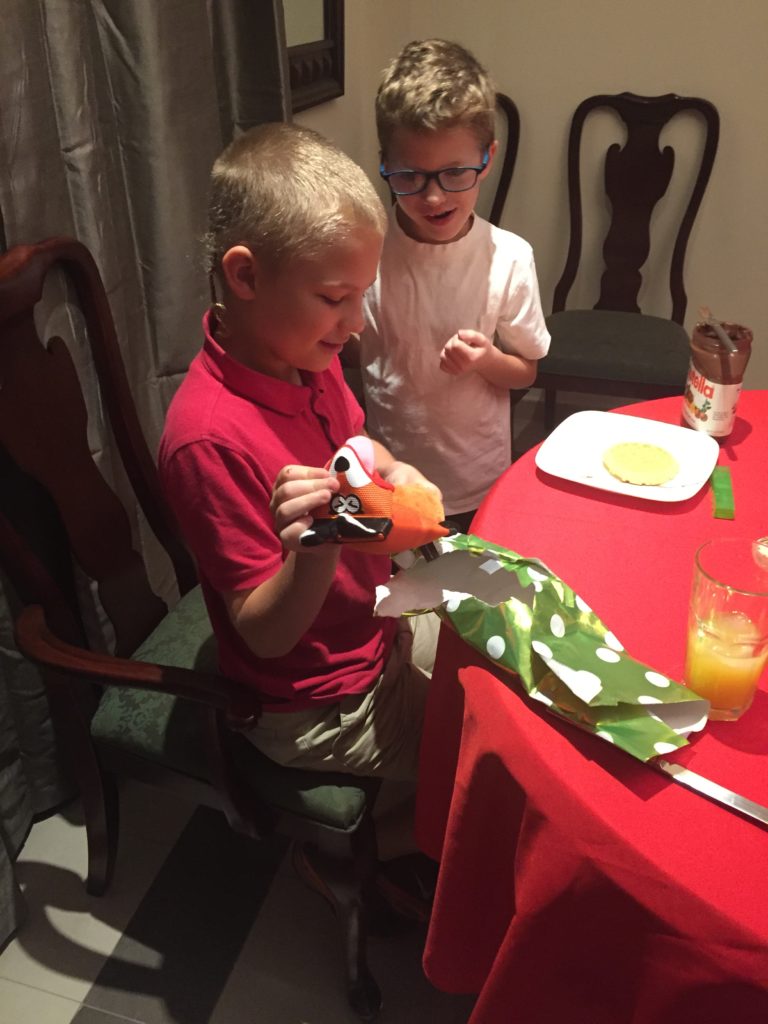 Everett Roger celebrated his 11th birthday. He had an awesome birthday party. Pool party of course because who knows when we will live somewhere warm enough to have a pool party in February again. 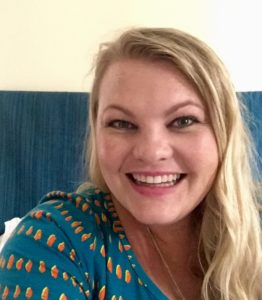 A picture of me to prove I really am doing well. I tend to take so many of the pictures I am not often in them. We are adjusting my thyroid meds every month in hopes to find something that will work. My yearly ultrasound check is coming up, I am sure it will still be cancer free and the mass they found last year will not have grown. 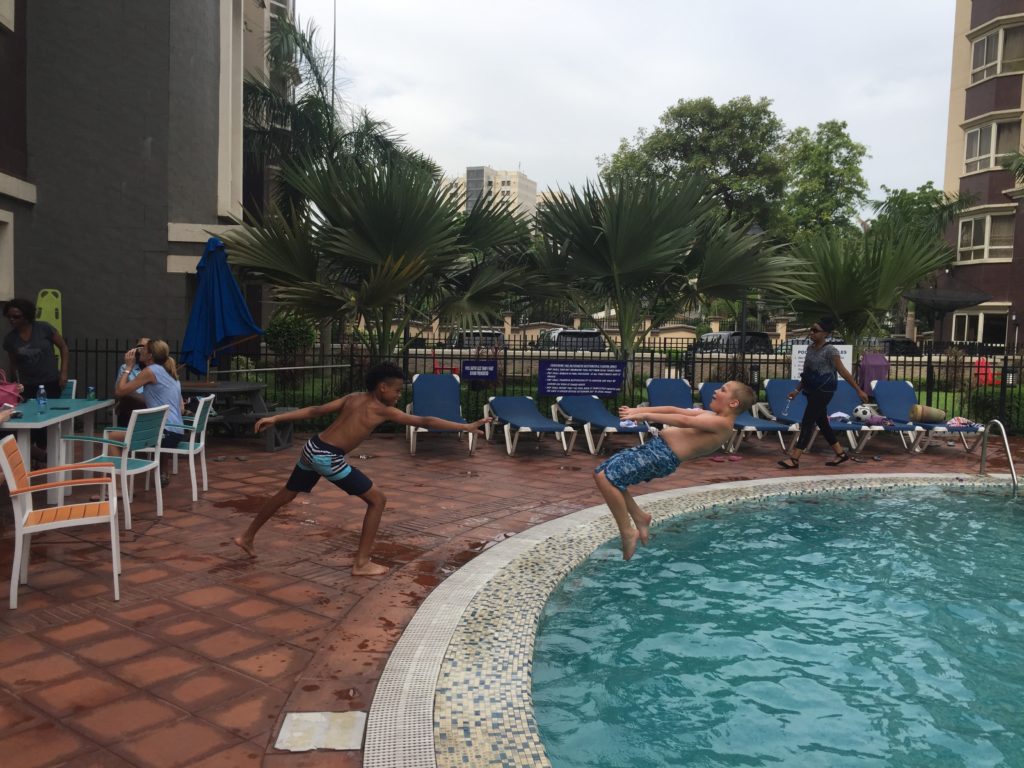 Roger and his friends are obsessed with pretending they have “The Force” and making their friends fly or jump. The pool adds another level of fun to the exercise. Roger loves living in a compound with so many friends around to play sports! 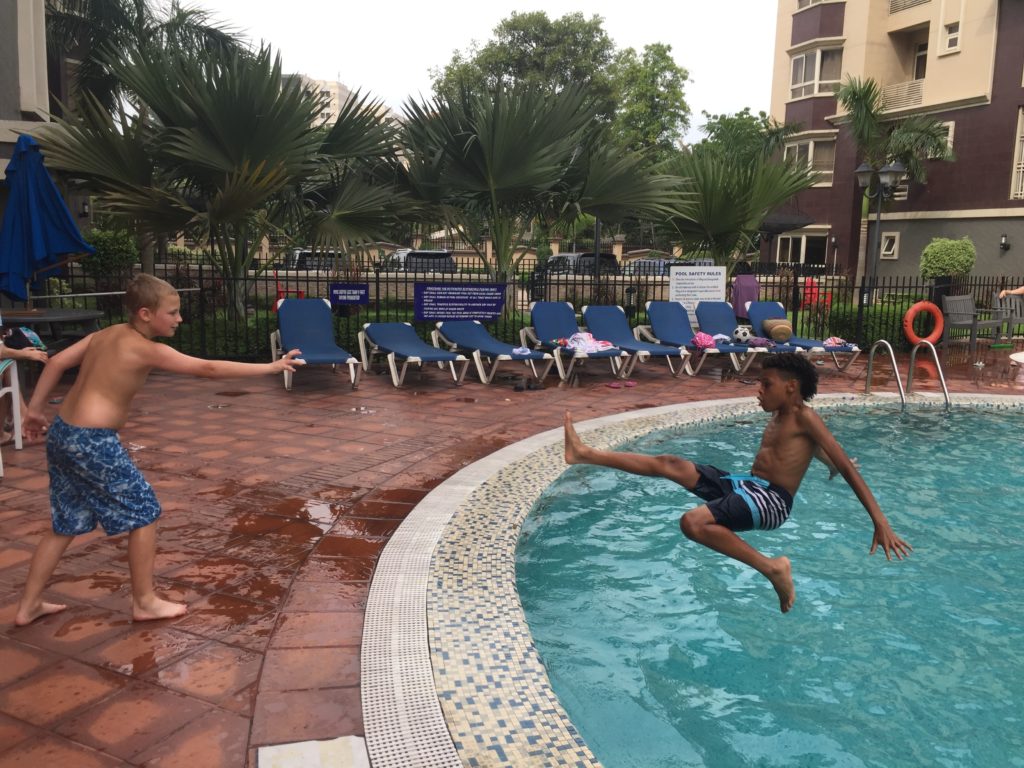 Oh swimming pool, how thankful we are for you! 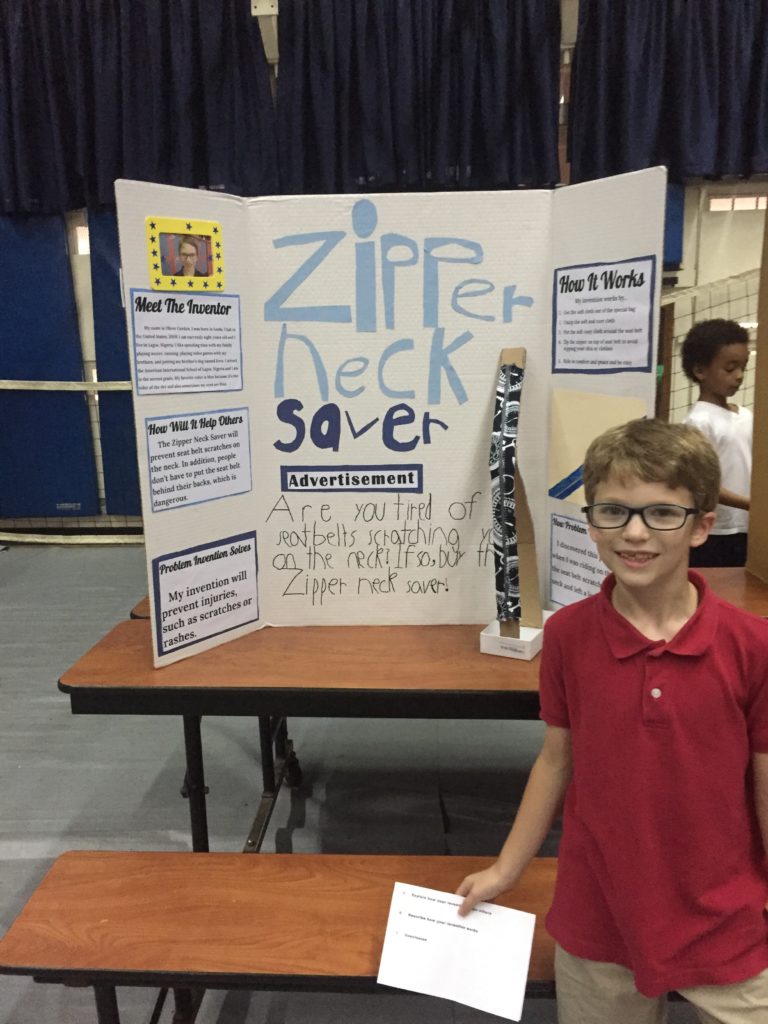 All students in the second grade joined the Invention Fair. The students developed their own invention including a prototype. Oliver may a Zipper Neck Saver which zipped onto a seatbelt to protect it from rubbing against your neck while on the school bus. Yes our busses have seat belts.:) 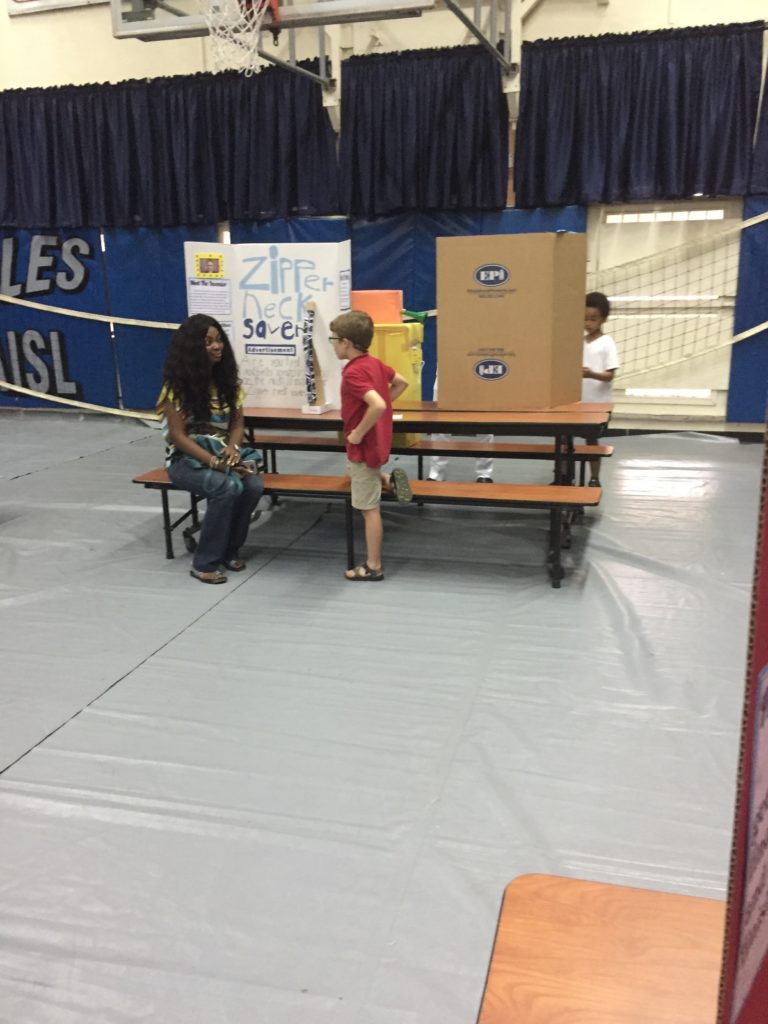 He got to present on his invention to all of the parents who came to enjoy the convention. He was so professional. 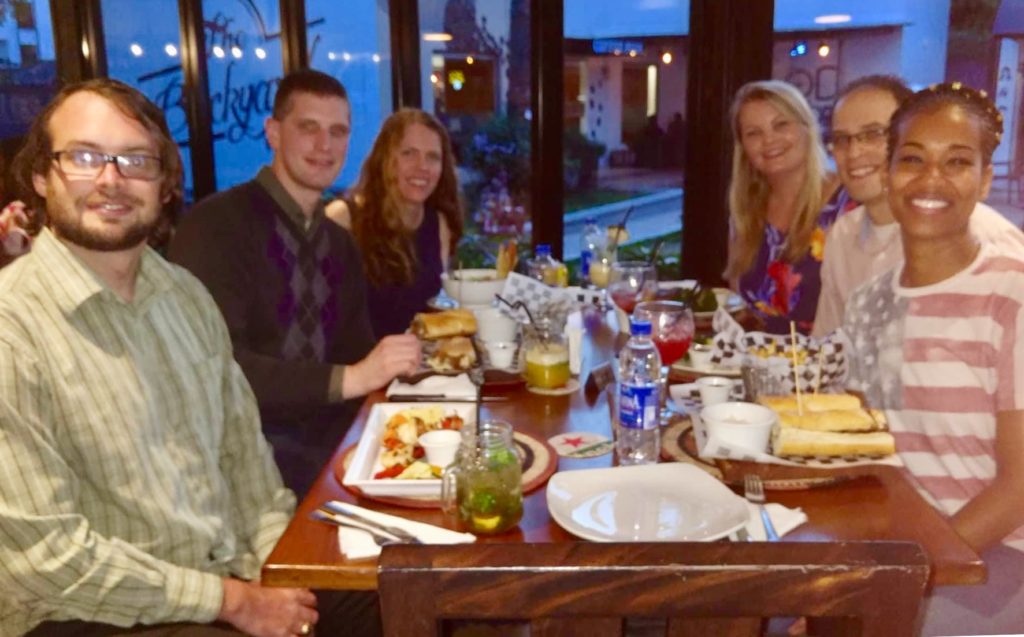 We spent a night out with our longest standing friends in Lagos. These lovely people were all members of Ben’s A-100 class in Virginia. They too were sent to Lagos on their first assignment. Happy one year anniversary with the Foreign Service! 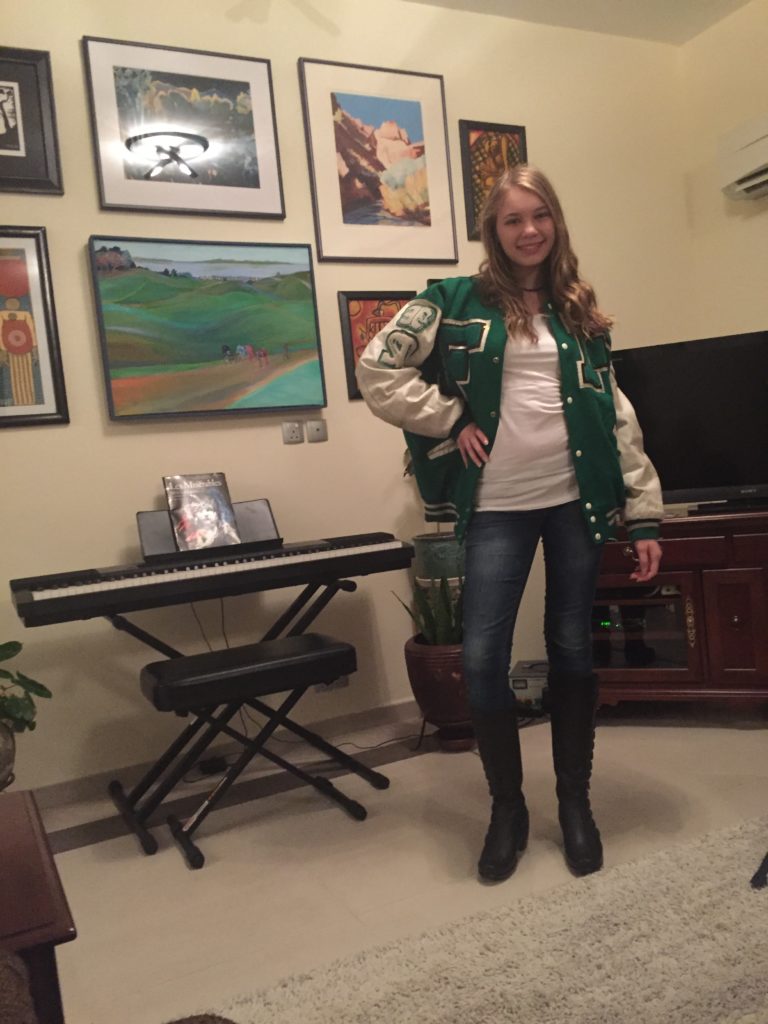 Dannica got to dress up for Throwback Thursday at school. When I told her she should wear a dress I had from the 1960’s she replied “Not that far back mom, more like the ’90’s or 2000’s.” Ben’s letterman jacket did the trick. 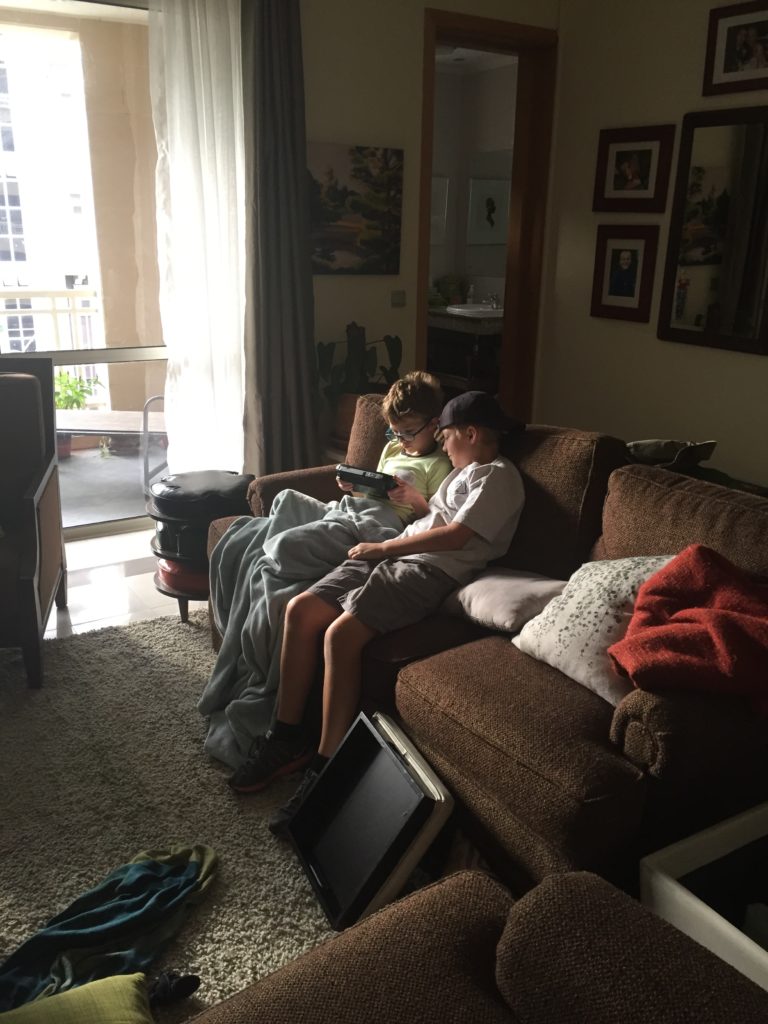 A quiet moment of two brothers playing video games in a thrashed living room because lets be honest, a fair amount of video gaming happens around here as well. 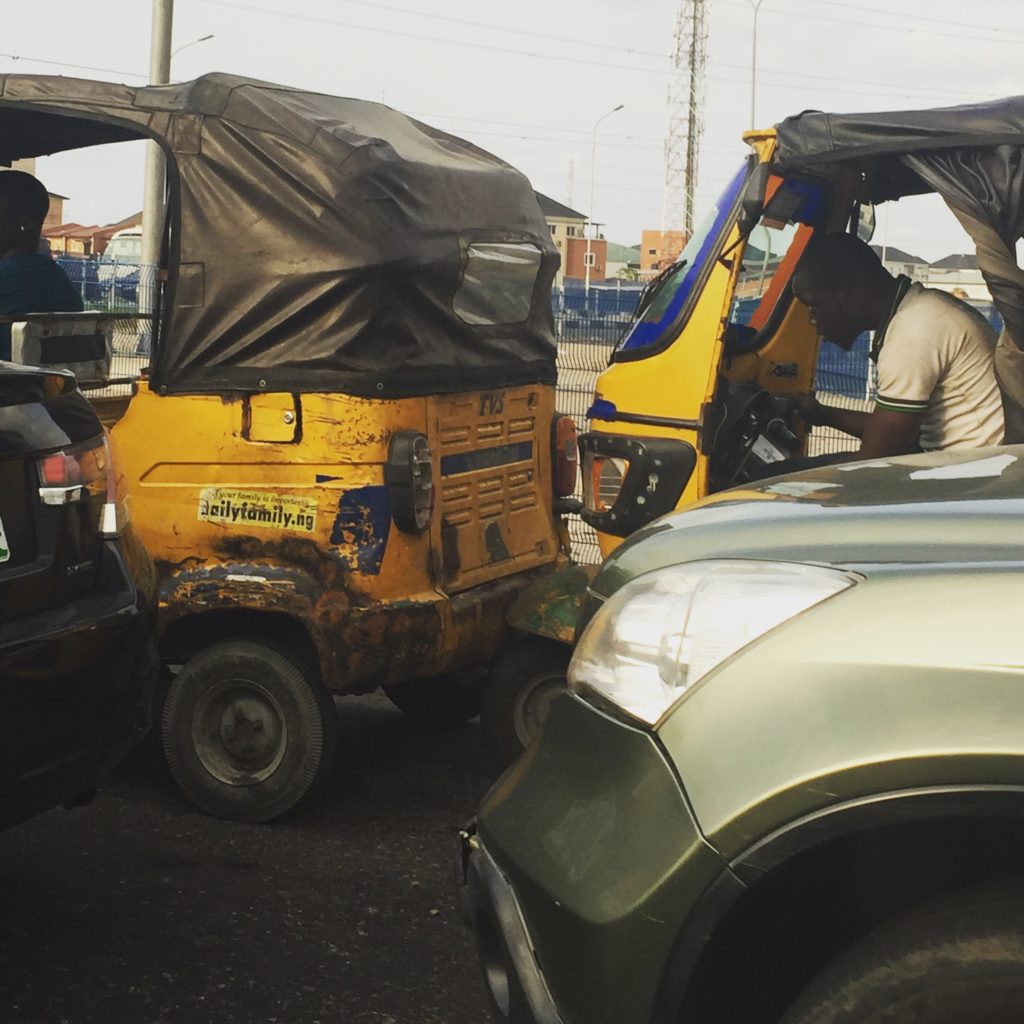 Unfortunately too much of our time is spent in traffic. Frank our great driver makes it a more pleasant experience as well as just being along for the ride. You have to enjoy the crazy like this taxi driver being  so done with traffic he is attempting to push his fellow taxi mate into the intersection. 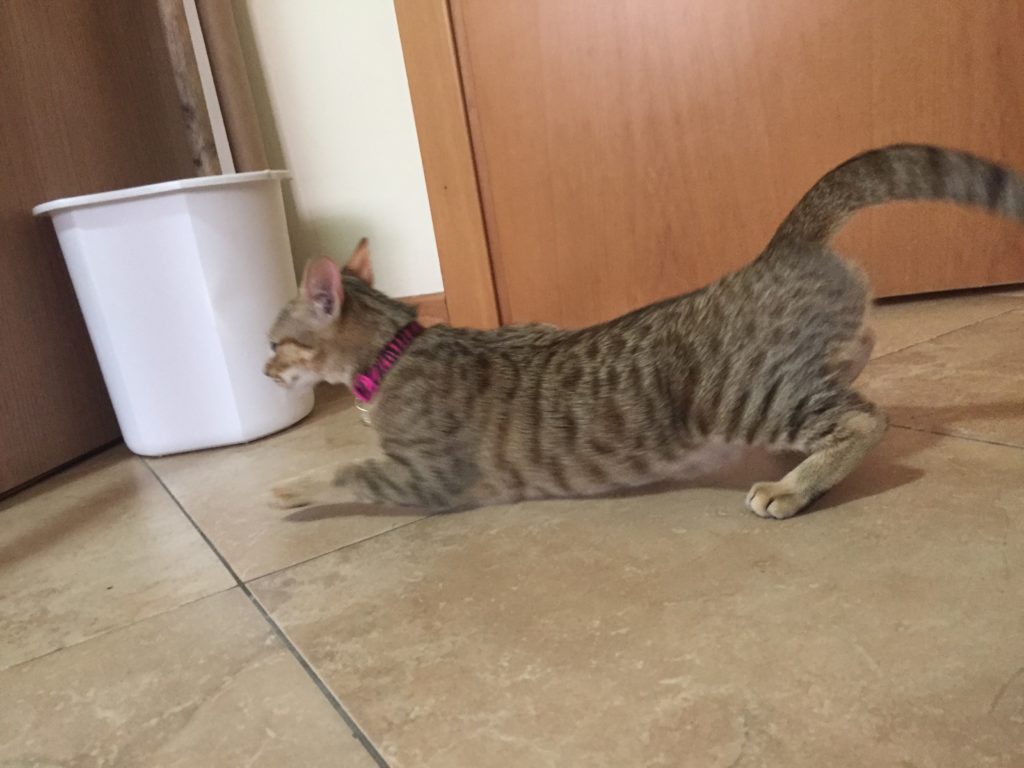 Some friends of ours went to Thailand. We agreed to kitty sit. Miss Damissa is a sweet and sassy thing. Of course she went into heat right after they left so the kids got to learn another reason to spay and neuter you pets. It was a loud few nights for them but she was fun to have around. 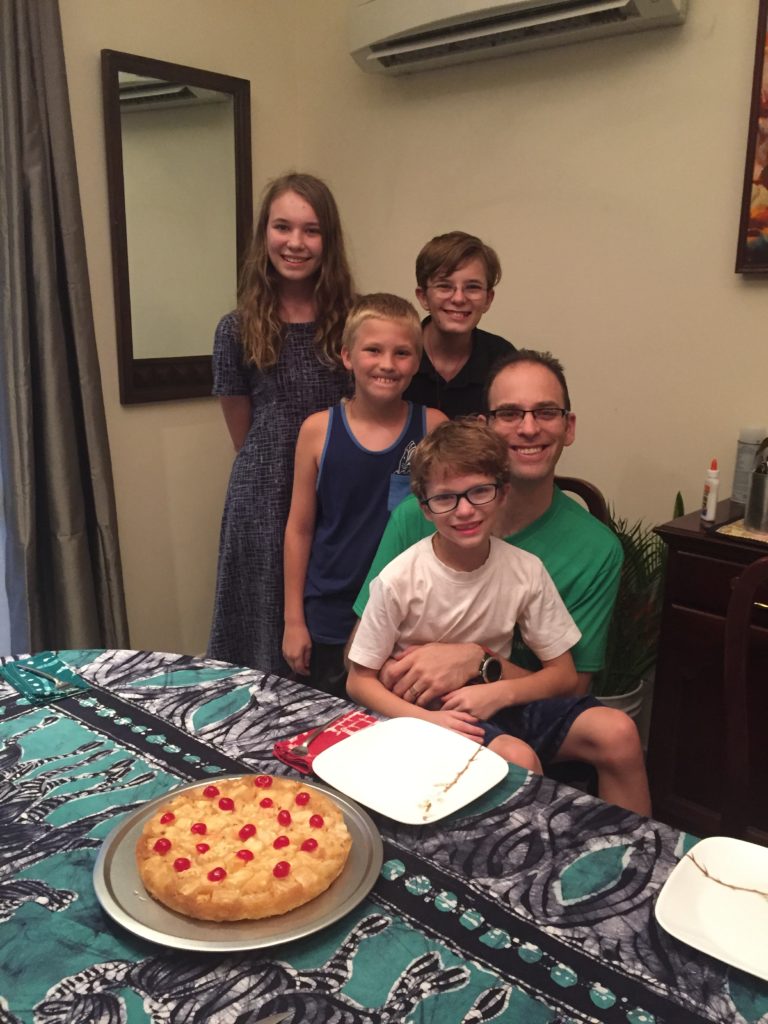 Ben had a birthday and I made him pineapple upside down cake with real pineapple. The pineapple here is so tender and juicy it was quite moist, probably too much so but it tasted great. 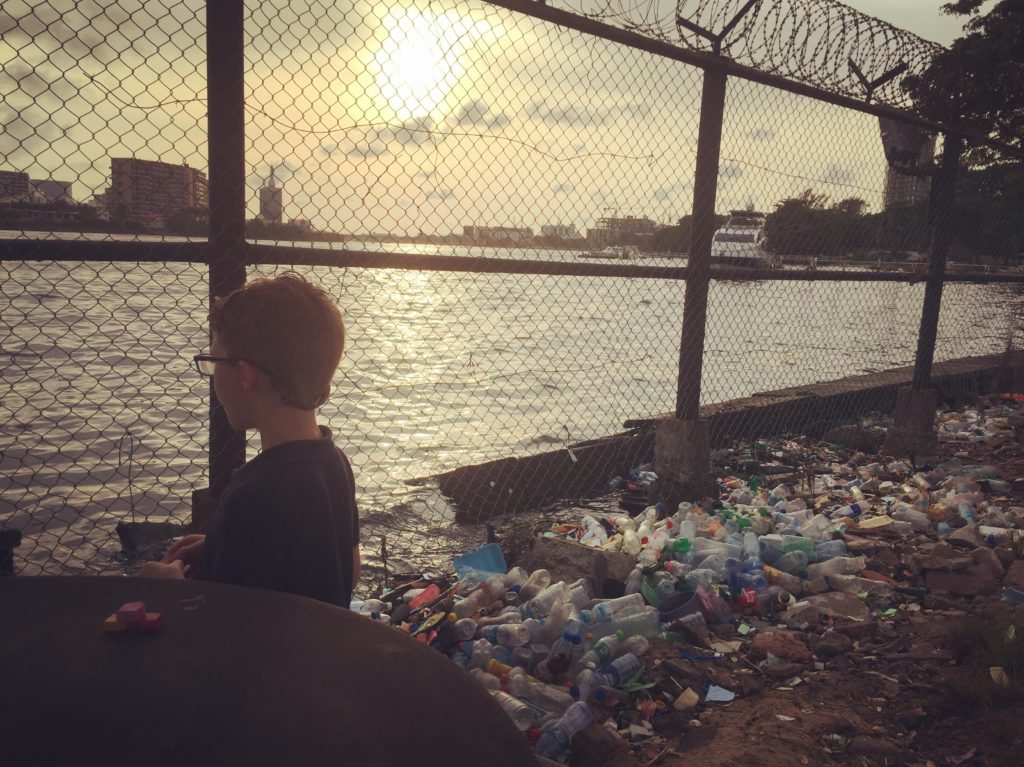 Well what can you say, a beautiful country ruined by trash. The first few weeks the kids were so shocked now they eat their candy and don’t even notice. 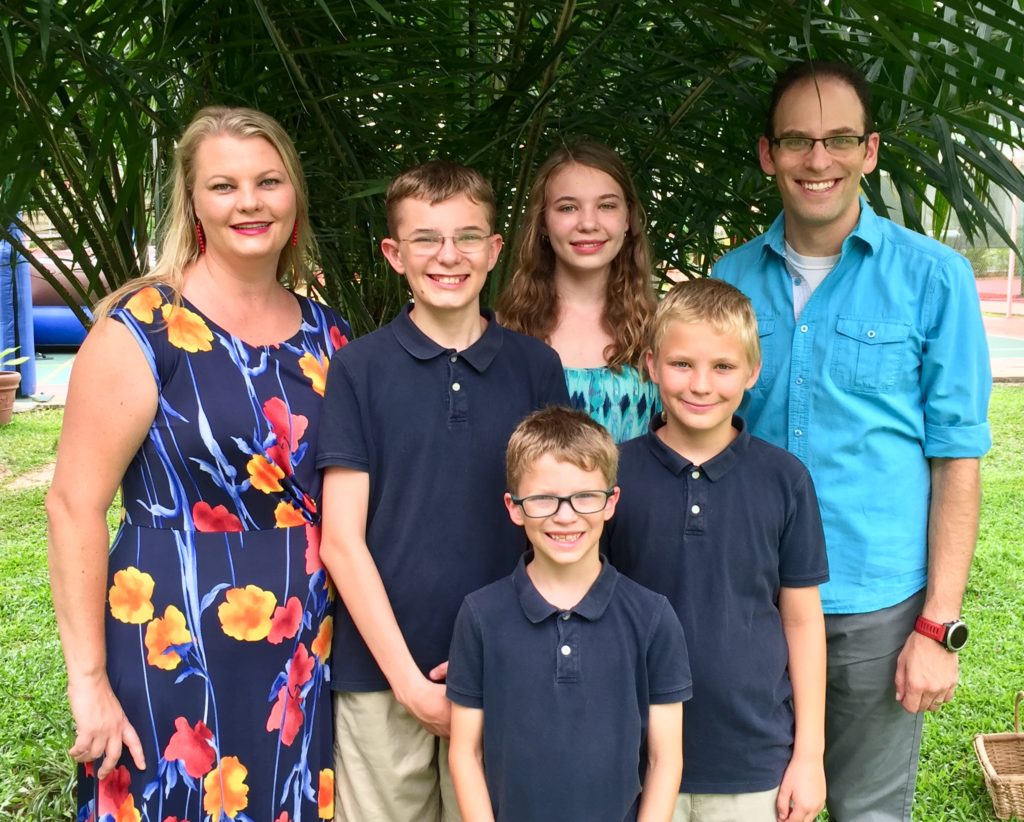 Easter at the American Club. They had games and an egg hunt and a pretty great Easter brunch. Look how tall they are all getting. 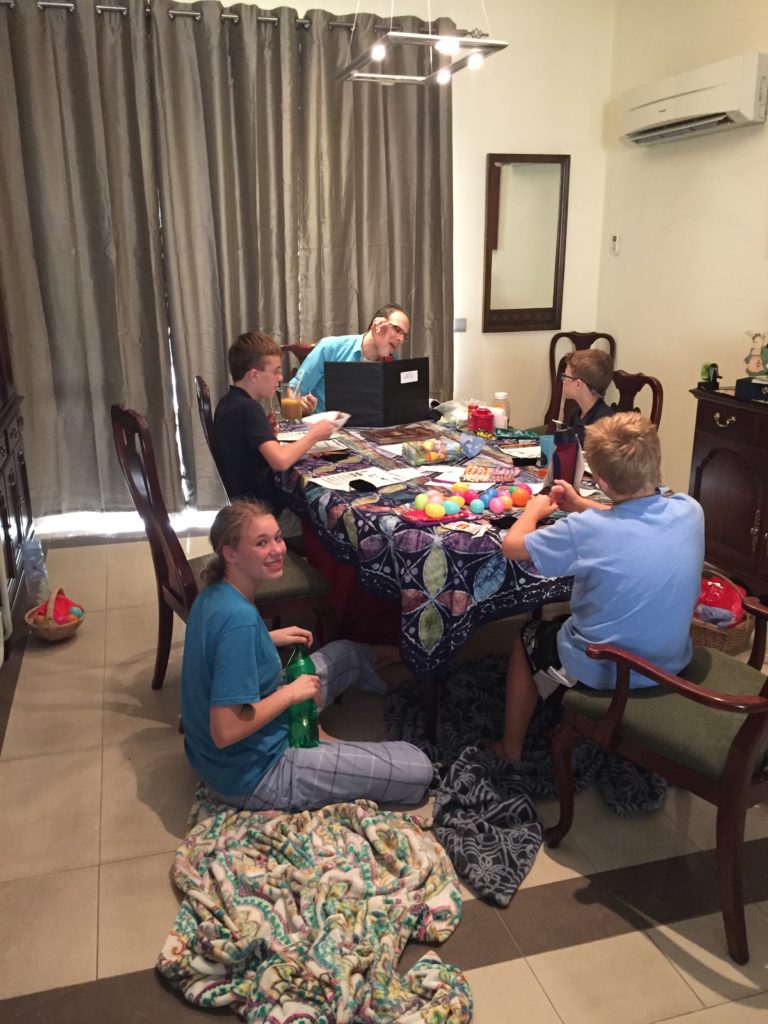 The kids and Ben celebrated Dannica’s safe return from France/Spain and the long Easter weekend with a few hours spent on their ongoing game of Dungeons and Dragons. Any long weekend it is the first thing they request. One of the perks of this job is Ben is home so much more. Also without the pressing needs of a house to care for we have much more time for family. 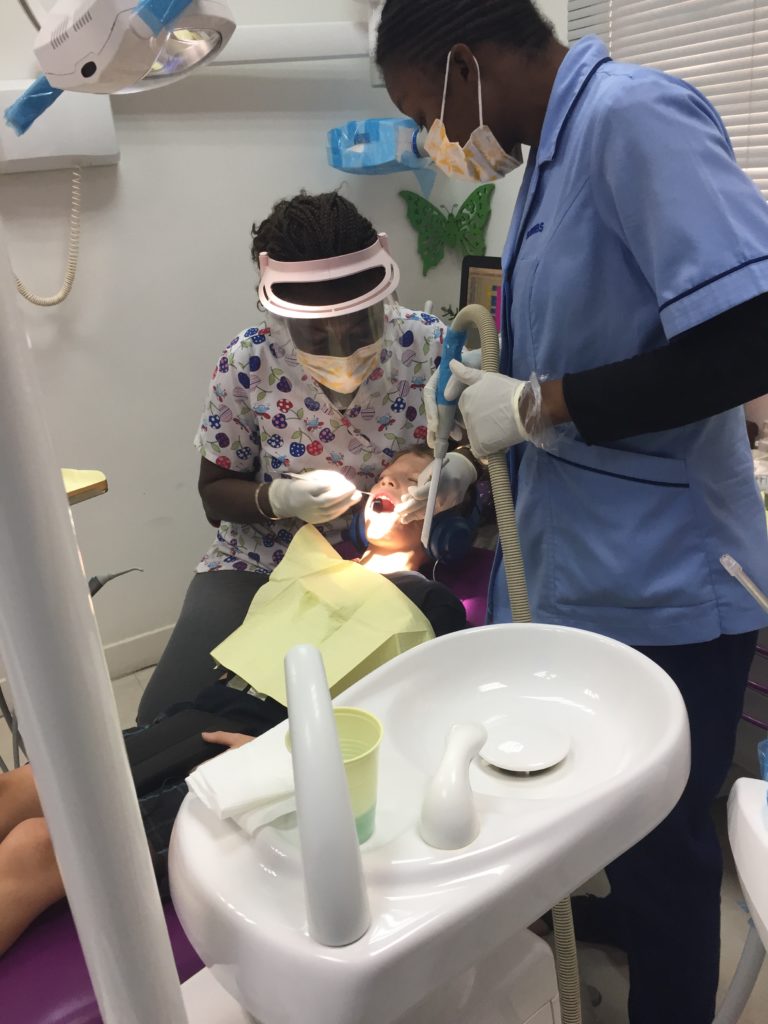 Keeping with our tradition of experiencing as much of the medical care as Lagos has to offer…Oliver had major tooth pain and had to see a local dentist for a filling. I was very impressed with their skill and sanitation. The cost wasn’t bad either. A three sided filling, stand up x-ray, infection treatment and 3 exams for about $150. Sure beats the $400 we paid in Virginia. 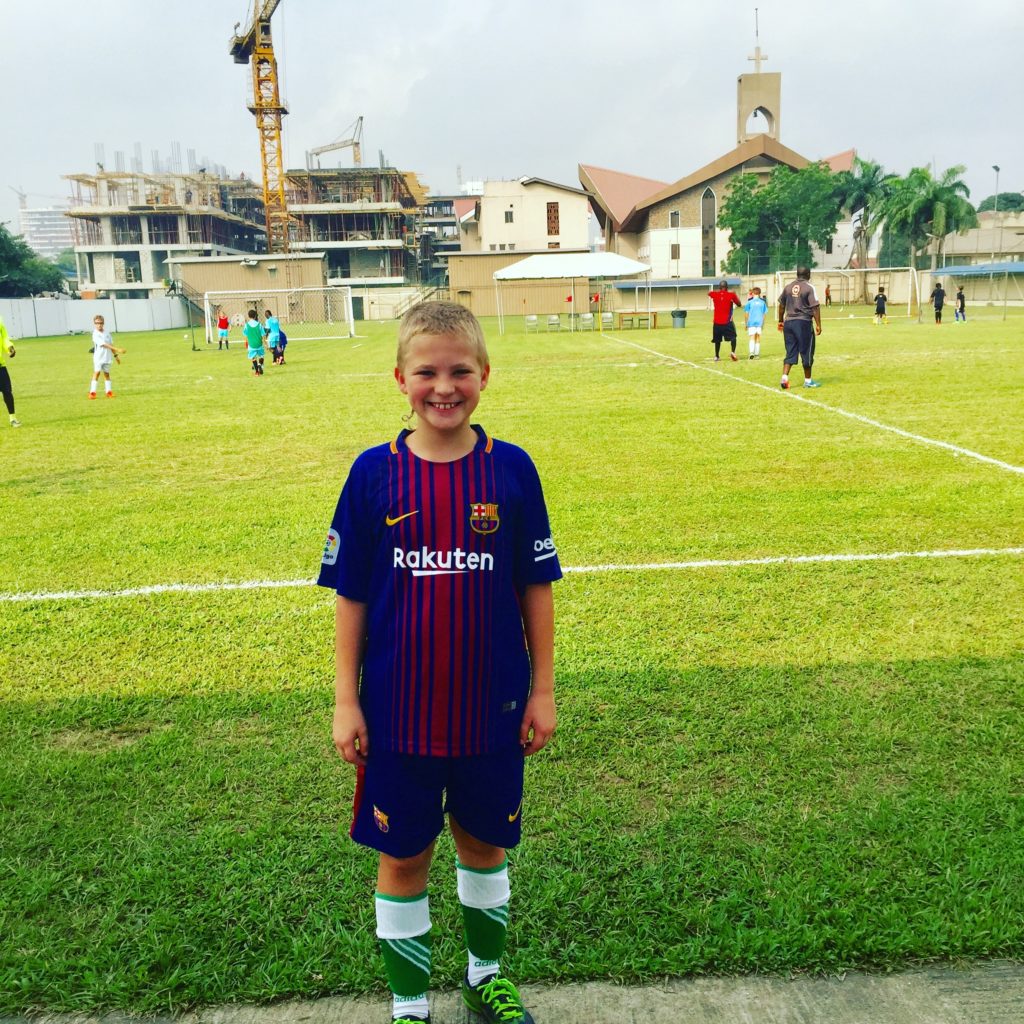 Roger was excited to participate in Saturday sport soccer. Barcelona is his favorite team and Dannica got to visit the stadium on her trip. 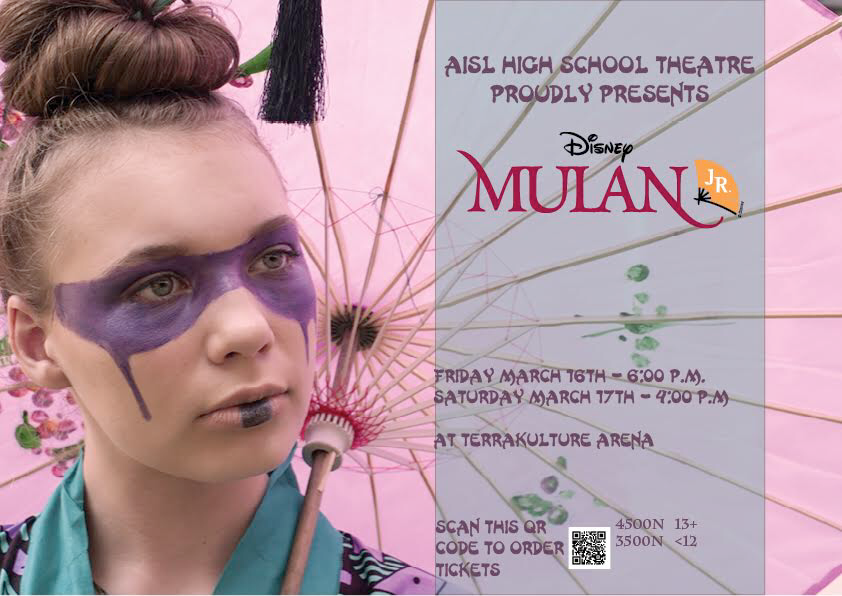 Dannica got to play Mulan in the school musical. It was pretty magical watching her. We now have a huge canvas poster like this! 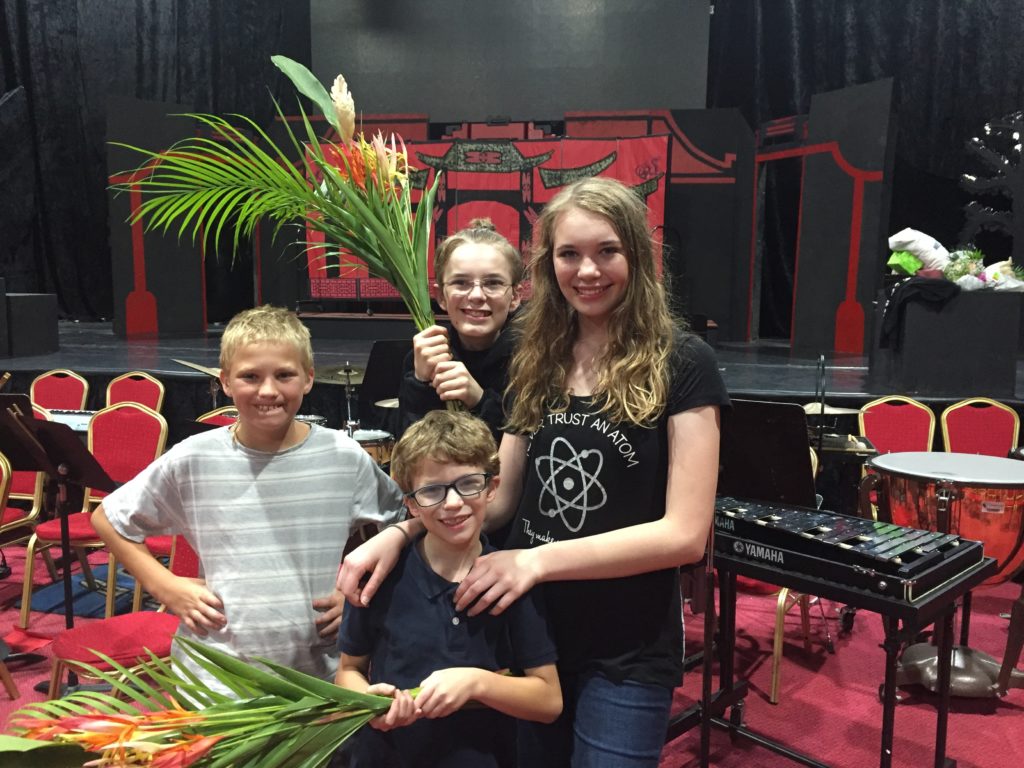 A show well done. We didn’t get any pictures of she or Harrison during the performance leaning on a professional filing crew. I guess there have been some problems so we still don’t have the video. 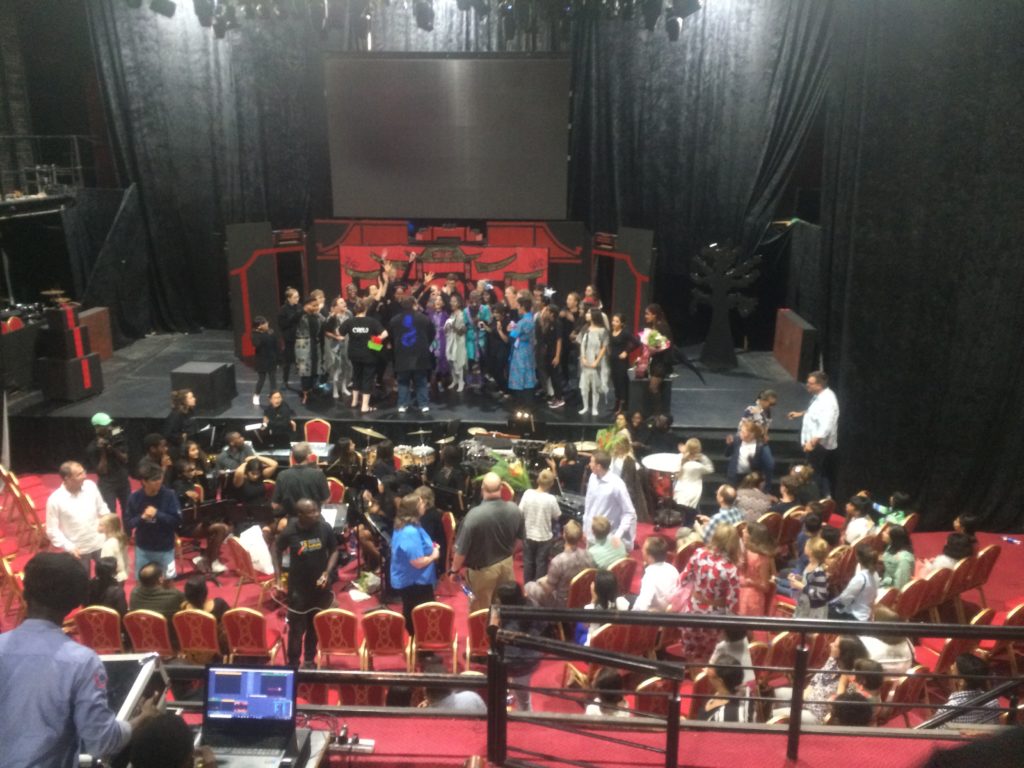 The cast and crew at the end of the show. It was a full house. Over 350 seats sold out both nights. 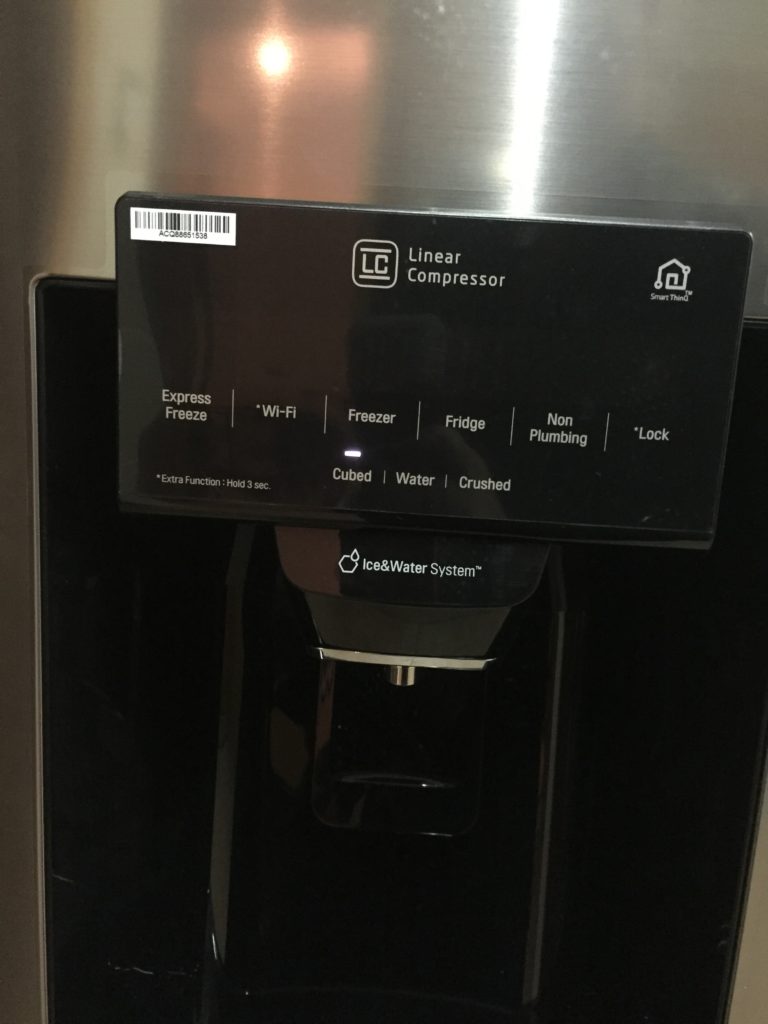 We have gone through 4 fridges and one freezer in the 9 months we have been here. Hopefully this one with mysterious Wifi will be the keeper. 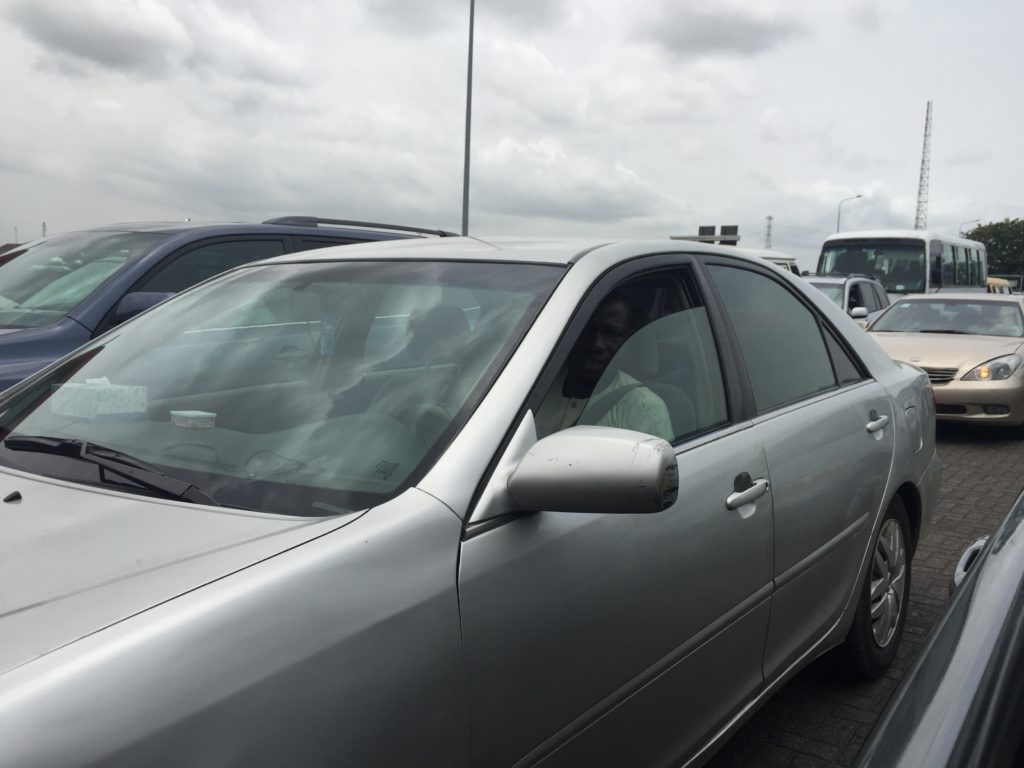 Since our car arrived 5 months ago we have been hit by two motorcycles weaving their way through traffic and this guy who was trying to cut in line while waiting to pay a toll. He scraped that mirror all along the side of our Pilot. I was not happy. There may have been some words said. Ben was driving. Needless to say it ended fine because Frank our driver is magic and removed the paint with foam and brake fluid?!? 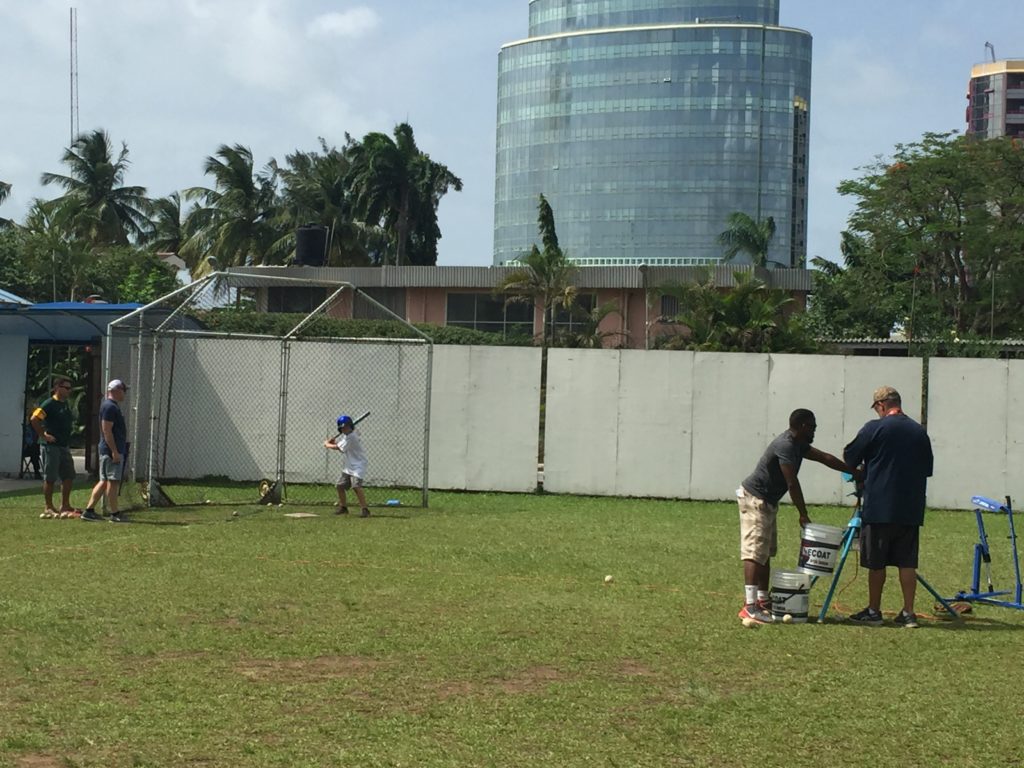 Saturday sports has now moved on to baseball which Roger is excited to play again after missing last years season because of our move. Other than fencing, watching him play baseball is the most enjoyable for me. 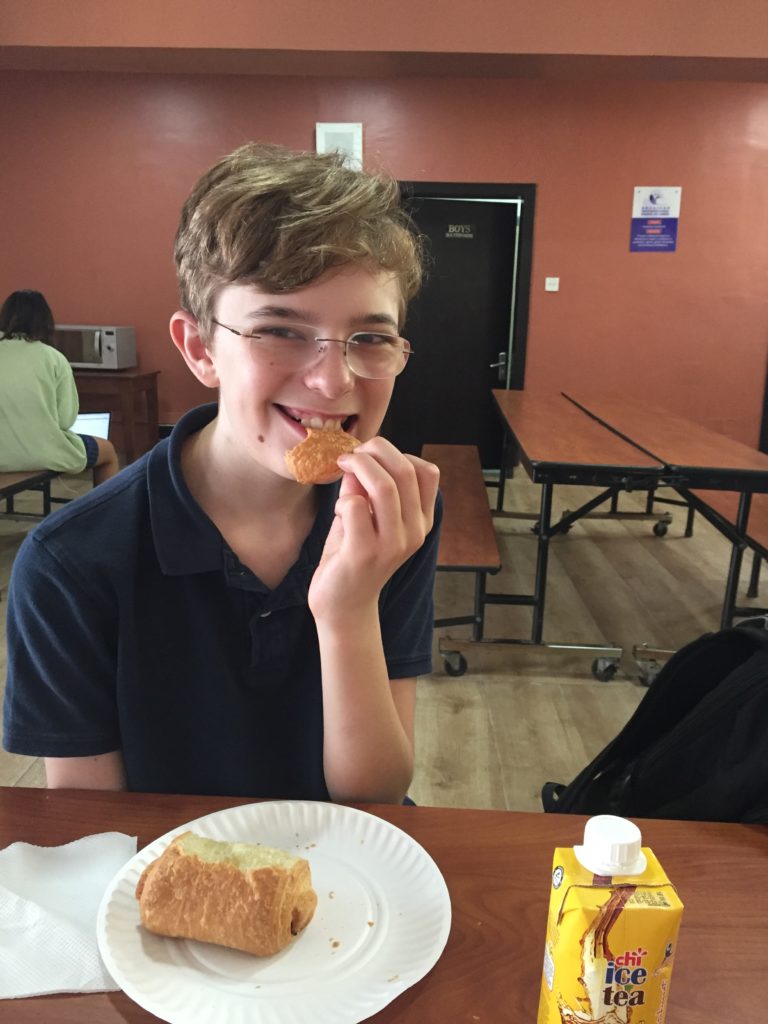 The kids had the equivalent of parent teacher conferences. Only the teacher doesn’t really talk. The kids put together a online portfolio showing all the work they have done in various classes so far that year. They do a formal presentation to their parents. It was pretty cool. Harrison was happy I rewarded him with a chocolate croissant. I miss this half grown boy he is currently on his class trip to Norway.