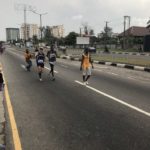 I was on the fence about whether or not to run this race. After I ran Boston in 4:52, I swore to myself that I would not do another marathon without an appropriate cycle of training leading up to it. It is much more fun to be able to run the full distance instead of petering out and having to walk, while swarms of other runners pass you. In prior marathons, I had run a total of between 500 and 800 miles in the 4-5 months leading up to the race, which gave me a good level of fitness. Then last year, I ran Ile Ife, because I wasn’t going to pass up the chance to run a marathon in Nigeria, and I did a little better training for it, but still clearly not enough, as I ran a 5:23. Once again I told myself that I wouldn’t do another marathon without a full training cycle. I had an eye on February’s Lagos City Marathon, and starting last summer I had established a fairly consistent habit of 3 runs per week, and started increasing my miles a little and even working on lengthening a “long” run on the weekends. Between the heat and humidity, the traffic, the rough roads, the fumes from traffic and generators, and the harmatan, Lagos is a difficult place to run. It’s very different from the beautiful dirt paths and red rocks of southern Utah. Those factors got the best of me again, and I still didn’t get in the miles that I should have to enjoy a marathon. Nevertheless, as my wife pointed out, this would be our last February living in Lagos, and if I didn’t run it now, I’d likely regret it. She was right. So I signed up, and even pressured/encouraged a few friends to sign up as well.

This was the third running of the Lagos City Marathon, this year sponsored by Access Bank. It was nice, even with a $50,000 USD cash prize for the winner, and various other prizes, there was no entry fee! This did make it easier for me to persuade friends to embrace the suck with me. In all there were about a half dozen US Consulate employees (both American and Nigerian) who ran this year. Four of us rode together to the start, and ran together for much of the way.

The start line was much like the start of any other marathon. One notable exception: no port-a-potties. I don’t usually carry my own water during a race, but given the conditions here I wanted to ensure I had some at least, even though I couldn’t realistically carry enough for the full distance.

The race started outside National Stadium, and first few miles were northbound on the mainland. The course was dark, lit only by the headlights in the vehicles going the other direction. Not long after we got going, the sun came up. At about the 4 or 5 mile point, at Anthony Village, the course turned east to head toward the lagoon. This road is part of the regular route from the airport to our apartment, it was a unique experience to be on it on foot!

The course then turns south and goes across the third mainland bridge, which at 11.8 km long is the second longest bridge in Africa. As with the start, so with the course, no port-a-potties to be seen. It’s very common to see people urinating in public in Lagos, so I guess this isn’t too big of a surprise. Based on the theory that if you pee on something you have claimed it as your own, I guess I now own a small portion of the third mainland bridge.

It was really fun for me to experience 26 miles of this city on foot, at a much slower pace, rather than out the windows of a Consulate owned suburban. These are some of the sawmills of Mokoko community, just to the west of the Third Mainland Bridge. Logs are floated down the length of the lagoon to be sawed into “planks” (lumber) here.

Dy says that they went through somewhere around 200 bottles of water at our aid station. While there were no port-a-potties anywhere along the course, the aid stations were frequent (every 2 km or so) and well stocked with water. They also offered orange soda, which I initially avoided. However, it turned out that 2 of the gels I had brought fell out of my pack in my car at the start, so I ran out around mile 20. By 23 I tried some of the orange soda for the sugar. My stomach didn’t like it, won’t be trying that again.

For Consulate runners, the aid station was also an optional beer station. I figured, there are carbs in beer, should be good right? It did taste very refreshing. As with the soda, my stomach wasn’t ready for it though, I think I’ll stick to beers at the finishline. The course wound its way all through Ikoyi and on to Lekki and Victoria Island, through the roads I typically train on. Here is the Lekki-Ikoyi link bridge, A.K.A. the only hill I have around me for training.

I have a firm rule for marathons: if I notice an official race photographer or a friend taking a photo of me, I have to run, even if I’ve been walking the last 2 miles. That was the case here as well. I saw my friends who had finished the 10k earlier, with a camera, so of course I had to run. My legs had nearly nothing left, but I actually look ok on this video. Just goes to show you that appearances can be deceiving!

The finishline was…somewhat less organized…than the rest of the race. While I was running out this spit of filled land toward Eko Atlantic and the finish line, there was a steady stream of runners going the other way with finisher medals. Some of them offered to sell me a medal for 5,000 naira. As I approached the line, there was a group of people from the Lagos State Governer’s office who were being honored for their work in organizing the race. They were lined up literally on the finish line, probably 40 people, blocking the entire course, who I had to elbow my way through to get across the line. There was a stage adjacent to the finisher’s chute, with a concert going on. The finisher’s chute was absolutely packed with people watching the concert, who had not participated in the race. Again, I had to elbow my way through them.

There was a large group of finishers lined up in one area trying to get their medals. Rumors were that they had run out I joined the back of the group and waited. All of a sudden the group surged backwards like a stampede, as they were moved by angry police officers to another area. They lined us all up in another area, and then told everyone to sit down. My legs were cooked, and getting up and down was not high on the list of things I wanted to do. Ahead of me in the line, I saw police officers wading into the throng with sticks and beating people who declined to sit down. I decided then and there that I did not, in fact, need a finisher’s medal, and I took off to join my friends for our carpool home.

Fortunately for me, there were apparently extra medals somewhere, and one of my friends had a connection to someone who had access to them. I was able to have him take my bib with its timing chip and prove that I had run the race, and collect a medal for me. All in all, it was a pretty miserable day, especially the second half. Hot, humid, difficult, frustrating finishline experience. And yet, my wife was totally right. I would DEFINITELY have regretted it had I not run. Marathon number 6 in the books, and looking forward to many more, I hope.

One fun bonus: one of my colleagues from A-100 purchased a bald eagle wine bottle holder, and designated it the traveling mascot of the 190th A-100. She established a set of rules whereby he is to be shared, traveling every 6 months from one of us to the next, each time to whomever is at the post with the highest combined hardship and danger differential rating. He has spent the last 3 months or so in Lagos. His participation in the marathon was also documented with the assistance of one of my friends here. I present to you, the first installment of the adventures of Eerice the Eagle (all captions courtesy of Taylor, also from the 190th)