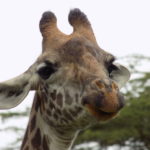 After spending a fantastic week in Malawi, our next stop was Kenya. We are very fortunate to have friends literally all over the world, who are willing to open their homes to us when we come visit. These trips would be much more difficult for us to do with our family of 6 without this (free) hospitality. We wanted to get in a bit of a safari type experience on this trip, while we’re in Africa, and we did great in Kenya! We looked at days/week long safari’s in the bush but they were so expensive and with several family members who get severe motion sickness bouncing around on dirt roads for days on end just wasn’t going to cut it. We were also really realistic about our amazing kids attention spans. They are up for just about every type of adventure but just as we would never schedule a trip with day after day of nothing but museums we knew too many days of animals, no matter how amazing, would be pushing their attention levels. So we made plans to see as much as we could with as little cost and driving and maximum time in the outdoors.

We had made arrangements with a driver to provide all of our transportation needs, including airport pickup, and 4 wheel drive vehicles when needed for the game park. Nairobi National Park is right in Nairobi, not far from the airport, and many species of animals can be viewed there, for far cheaper than the safaris in the Masai Mara and other wilderness areas.

We were very fortunate, and saw lots and lots of animals, including some which are apparently not frequently seen in this park, including black and white rhinos.

Our second day we went to Karura Forest, also in Nairobi. They had adult size bikes available for rent, and an Embassy family with kids was kind enough to lend us some kid sized bikes, and we had a beautiful bike ride among the trees and monkeys.

The elephant orphanage cares for young elephants whose parents have been killed by disaster or by poachers. They spend much of the day out roaming in an open area of the park, and then in the evening they all come running down this path to the stalls that they stay in at night and to be fed milk and hay. It was shocking how fast they moved!

The following day we drove to Naivasha for an overnight and to spend time at Lake Naivasha and in Hells Gate National Park. Lake Naivasha is full of many many birds, and home to Crescent Island. Crescent Island was where the film “Out of Africa” with Meryl Streep and Robert Redford was filmed. Several varieties of herbivores were imported for the filming and were left there. With no natural predators on the island, their populations have exploded, and they are very accustomed to having humans wandering among them, so again we were able to get very close views of them.

Once again we rented bikes for a ride through Hells Gate National Park. It was beautiful!

There was lots of obsidian laying around, some pieces as large as a beach ball! Dy’s father had taught her how to flintknap, so she took the time to show the kids this skill. They were very impressed!

Unfortunately, dispite our warnings about how sharp obsidian flakes are, Oliver then demonstrated to us exactly how sharp they are. (it did cut through the piece of grass he was testing it on, and then into his finger)

After riding the dirt road through the wider canyon, we reached the gorge itself, which called for a hike.

It turned out to be a slot canyon. Very reminiscent of the hiking back home in southern Utah, except much more lush and not as deep.

Our last evening back in Nairobi we went with our friends to an escape room. This was the first one our family had done, but it won’t be the last! It was super fun, each part of the group contributed to solving at least 1 puzzle, and there were some very creative puzzles to work on. Team “Major Lifestyle Changes” has been our trivia team name since we were in training, and so it was good to reprise that team name with one of my colleagues from training. We made it onto the leader board for the Inventor’s Workshop at Escape Room Kenya!