I was feeling so great toward the end of the year that I thought that I had missed my January/February slump, but no. I don’t know if it is the post Christmas blahs, illness, the cold or lack of sun but January and February are often difficult months for me. I struggle feeling motivated and spend much of this time in discontent. I have loved living in such a warm climate. St. George was warm, hot during the summer and lovely in the spring and fall but it got cold and windy often during the winter. I tended to want to stay in bed as much as possible to read and watch movies. Forcing myself to walk helped tremendously. I was doing the same here and enjoyed walks several days of the week well into December. Then all at once Lagos crappiness hit. I got sick. One illness after another. I missed the consulate Christmas party, book club and pretty much every other get together I was looking forward to in the month of December. Lots of people left to go out of town and the compound was pretty deserted. I was luckily well at Christmas and a bit afterward but Harmattan hit town with a vengeance. Dirt from the Sahara Desert was whipped into the air where is blows all over Western Africa. It was gross. The skies were brown. My lungs would burn when I went outside and biggest of all I started to cough. Luckily we got a little break away to Cairo and I came back with a better attitude. Two days after returning Harrison ended up in the hospital.

He started complaining that he was short of breath while lying on the couch reading. During dinner he couldn’t eat because he was gasping. By an hour later he was having a difficult time standing and his fingers and toes were tingling. When I checked his pulse ox levels they were fine but his heart rate was fast and erratic. Missing beats. We decided to take him to the hospital. Unsure of what traffic would be like I grabbed the AED- Automated External Defibrillator from the lobby of our building just in case his heart stopped. The hospital was great. The Med Unit from the consulate called in and let them know we were coming in. His EKG was normal at arrival but they could tell something was off. After two hours in the ER with no answers and Harrison feeling fine and back to his old joking self they decided they wanted to monitor him for 24 hours and have him see the pediatric cardiologist. So Harrison and I got to spend the night in the ICU. It was interesting. The doctors were attentive but the machines kept malfunctioning. His blood pressure was unusually high as well as his pulse. When he would stand his pulse would rise and never go back to his resting pulse. He had repeated apnea episodes. Just lots of odd things going on. He slept ok, I did not. In the morning Ben and I traded places and Harrison had another EKG, ultrasound and chest x-rays. I went home to sleep. It reminded me how much I hated staying up all night sleeping in a chair of a hospital room. Midwife memories! He was discharged with nothing notable wrong but definitely had an episode of some kind. He returned a week later to repeat all of the tests for comparison. The pediatric cardiologist seemed very knowledgeable and was willing to do what ever tests I requested. He even knew a fair amount about Ehlers-Danlos Syndrome which is always a bonus. All in all Harrison seems fine, it cost us about $1,400 which is significantly less than it would have cost in the US and we were happy enough with the experience. 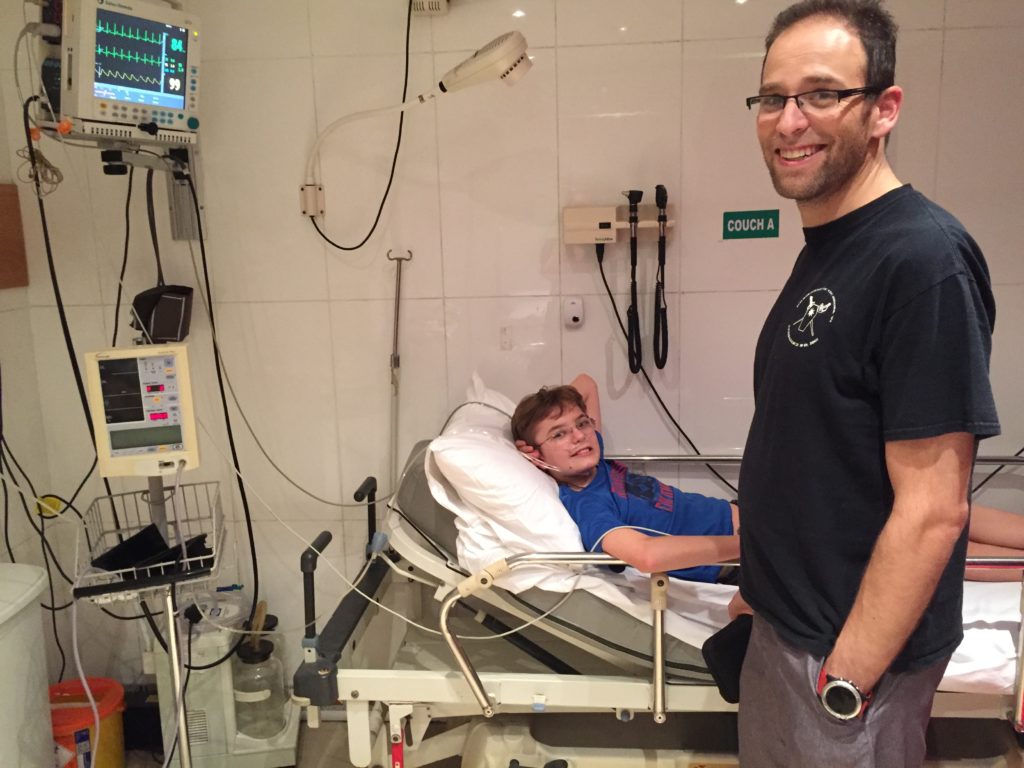 Harrison is always so happy and content it made it a bit tricky for medical professionals to understand when he really doesn’t feel well or is hurting. They thought he was hilarious, which he is. 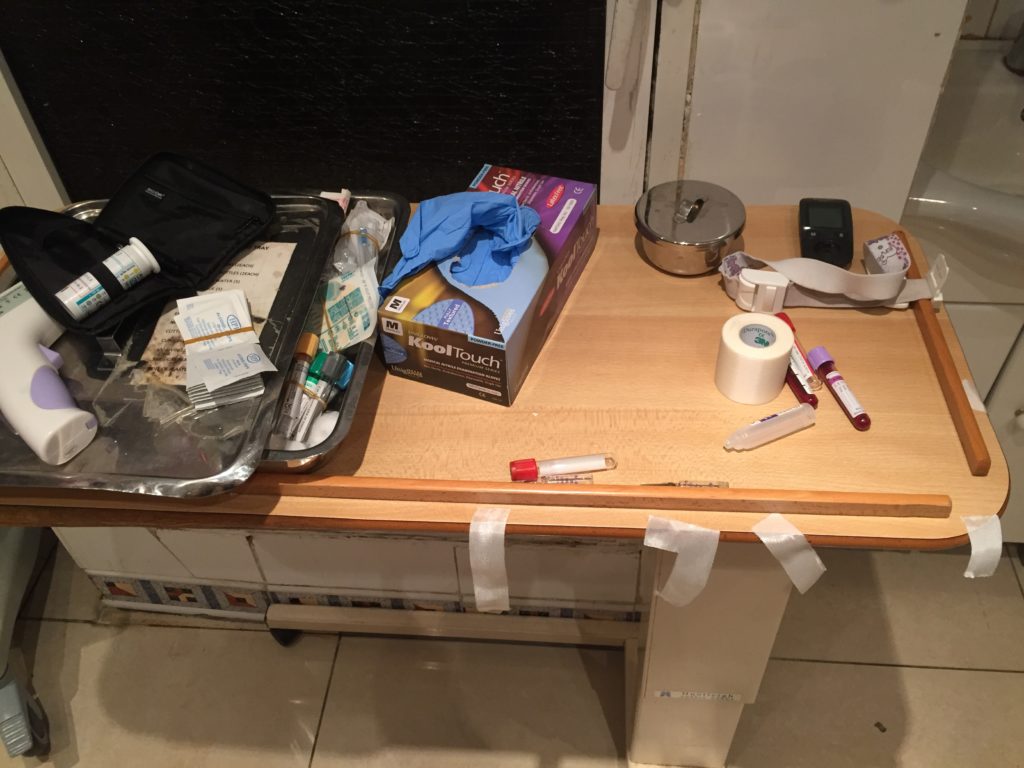 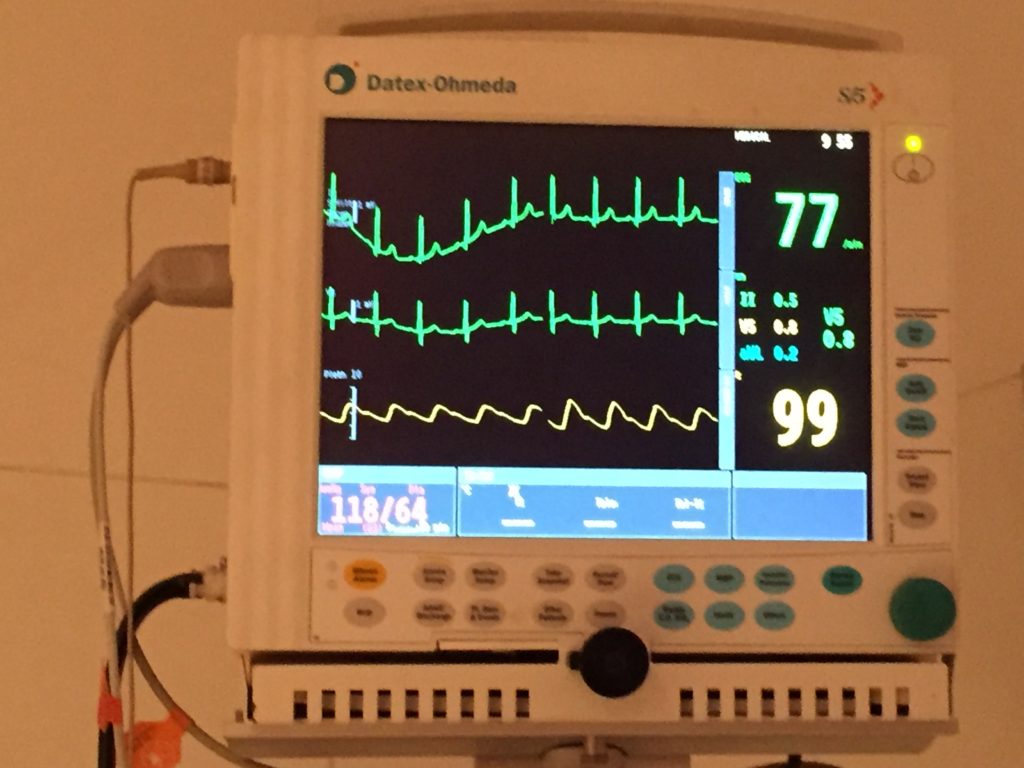 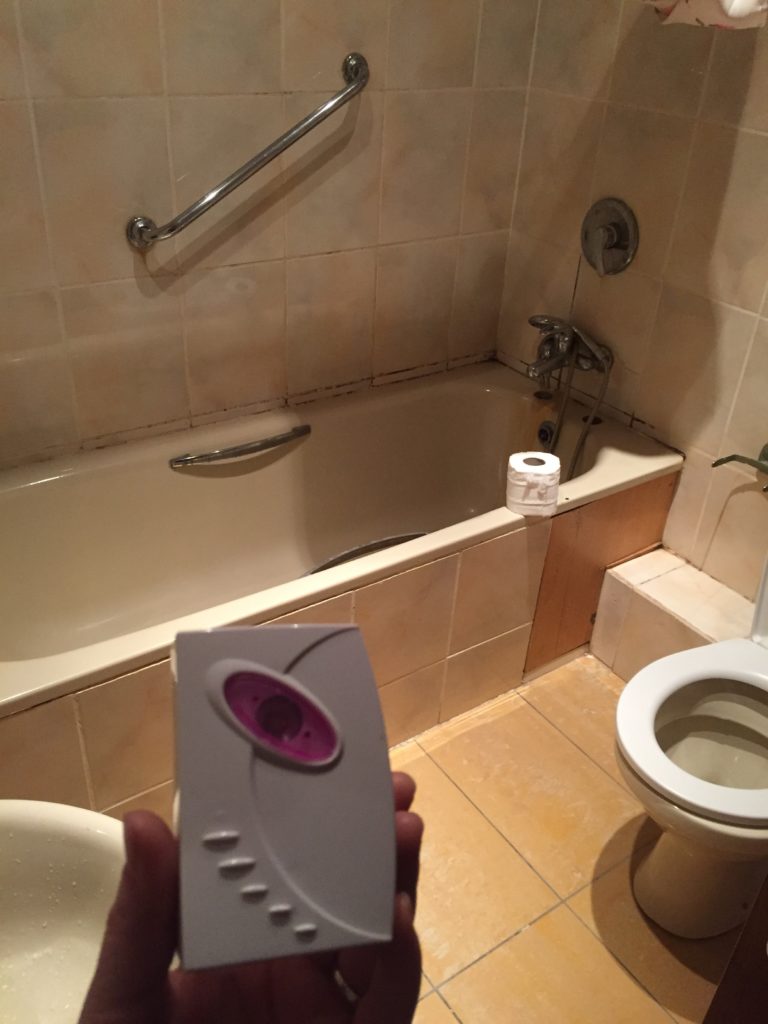 Our call light wasn’t working so the nurse gave me this hand alarm. You push that red button and everyone on the floor knows we need help. Toilet paper is a hot commodity here. When you are admitted they give you your own roll that you are supposed to keep track of.

A few days after Harrison’s hospitalization I got sick. Just a normal cold. I began coughing. I didn’t stop for 7 weeks. Once that original cold left  Harmattan was here so all of the dust in the air just kept my coughing. I couldn’t spend more than a few minutes outside or I would begin to cough so much I vomited. An air purifier helped some but not enough. I was pretty miserable. Toward the end of the Time of the Coughing, as it will be known from here on out, I got another cold. Harrison was better within a week but mine led to wheezing and rasping in my lungs. I finally decided to visit the Med Unit at the Consulate. I hesitate to go in for cold or respiratory issues because I can’t take most varieties of cold medicine. After my radioactive iodine treatment my salivary glands were damaged. I can’t take any medicine that dries out mucous membranes or else I end up in serious pain and salivary glad infections. I figured if I went in I couldn’t take the medicine they recommended and I figured the illness was viral or Harmattan caused so nothing to do there. My nasal swab came up positive for a cold but negative for scarier things like the flu. My pulse ox was fine, blood pressure was high from coughing at least two times every five minutes.My lung capacity was that of a 5 year old. They decided to send me for a chest x-ray to rule out pneumonia and bronchitis. Medical imaging services are unique here in Nigeria. Anyone can walk in off the street and request a test be performed. It took me about an hour to get my x ray done. 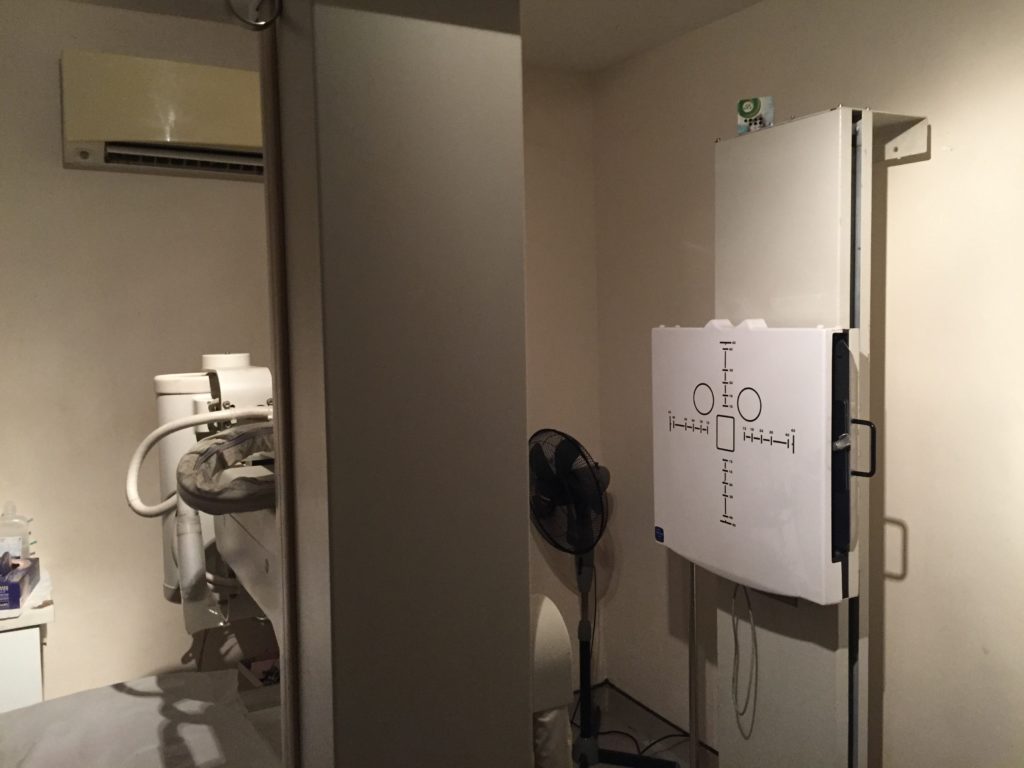 It was negative for pneumonia but there was still an awful lot going on in my lungs and with a couple of days of antibiotics and a nebulizer treatment there was still no improvement. They sent me to see a pulmonary doctor. So I got to enter my 4th medical facility in 7 months since our arrival. They got me in quickly and the doctor seemed very well educated. He took the most comprehensive oral medical history that I have had in years. He was especially fascinated with Harrison’s EDS diagnosis. 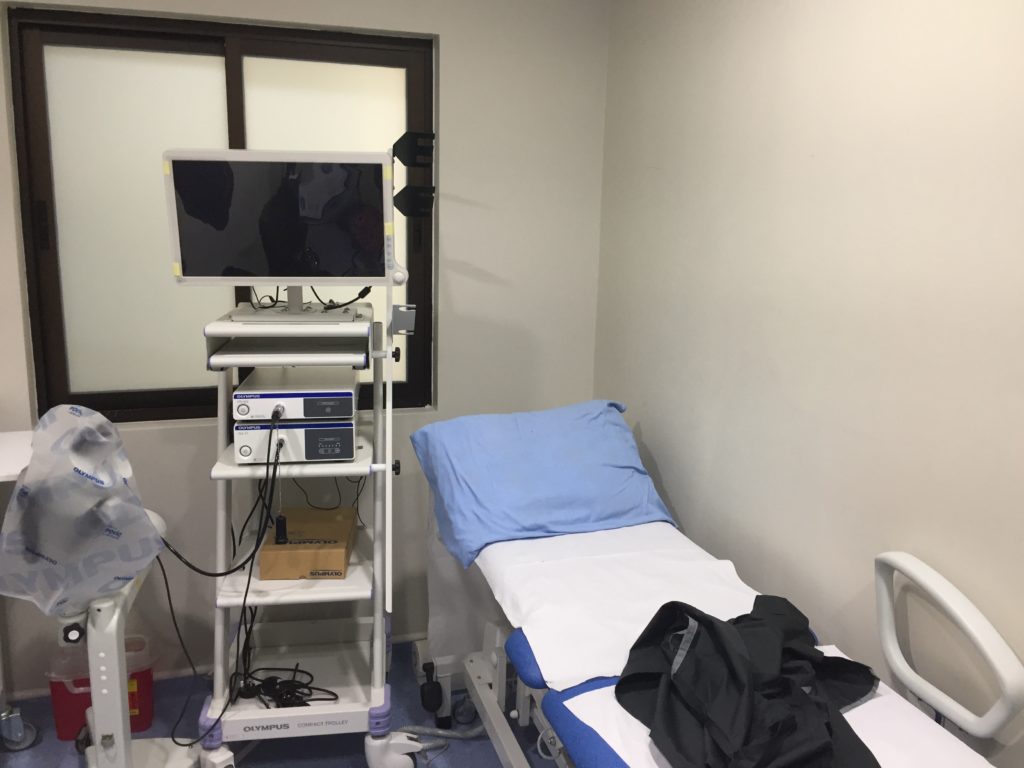 A full exam later I left with oral steroids. He said my lungs were just irritated by the virus and said that it wasn’t uncommon for people to cough 2-3 months after a cold in Nigeria. Will it may be uncommon sir but it sure isn’t normal! Back to another week of rest I finally started to improve. I’m skeptical that all the medication did anything and think that it is more likely that my cold ran its course and the rain finally came and cleaned the skies. Regardless I am finally a functioning human again and everyone is happier. I was a pretty miserable person to have around and was not enjoying my Lagos experiment. On top of these issues I am really struggling thyroid wise. My most recent labs were terrible and major changes to my medication were made. In the almost two years since my thyroid was removed I have yet to have my thyroid hormone labs be normal. It is exhausting and frustrating and I am sure doesn’t help to boost my immunity.

January and February and the cough of 7 weeks all coincided with months 7 and 8 of our time here in Lagos. It is not unusual for people to struggle when they have hit that time mark at post. The first six months after arrival you are just so dang busy trying to get everything up and running and figuring out how to function in your new life. Everything in new and excited. After about month 6 you begin to realize all the things you found quirky and interesting at first about your home or new culture are just plain irritating and time wasting. For example: I need to find a black t-shirt and shorts for my 12 year old. I estimate this will suck  at least a day and a half of my time from my life.

A new kind of gloomy January and February has come and gone, the skies are blue, vacation is on the horizon and the world is looking up.