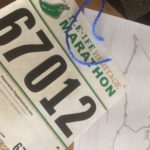 Several months ago I set a goal of training for and running the Lagos Marathon.  I was good and consistent about training for a while, and built up to a long run on the weekends of 13 miles, but then my motivation fell by the wayside. However, an opportunity arose to travel outside Lagos to participate in the inaugural Ile Ife Heritage Marathon, in the cradle of Yoruba civilization.  Ife is the oldest Yoruba city, dating back to circa 500 BC.  Not wanting to pass up this opportunity, I went for it with 2 friends, notwithstanding my lack of training.

We drove the day before the race, about 3.5 hours north/northeast to Ife, in Osun State.  The start of the race, and in fact the first half of the race, would be on the campus of Obafemi Afuwolo University, and we stayed in rooms at the conference center located there. 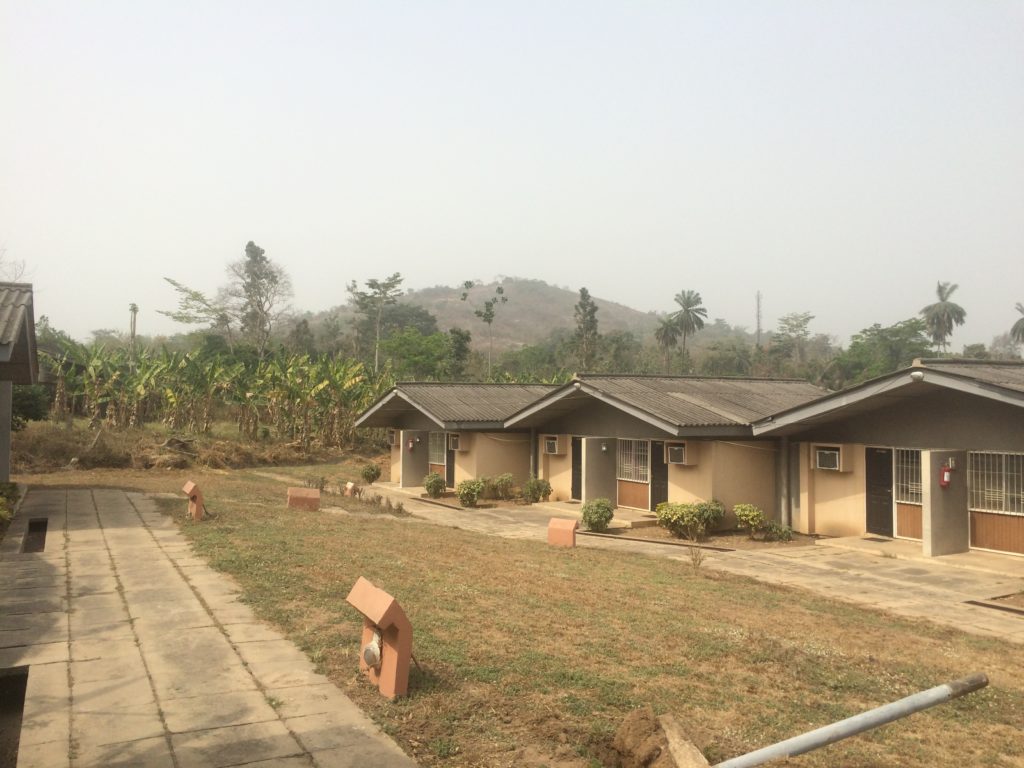 We met up with several of our fellow runners, including the recently surpassed holder of the record for having run marathons in the most countries (center below).  Nigeria was scheduled to be the 142nd country in which he completed a marathon.  We were first treated to a tour of Ife and the OAU Campus, culimating with a tour of the Palace of the Ooni of Ife. 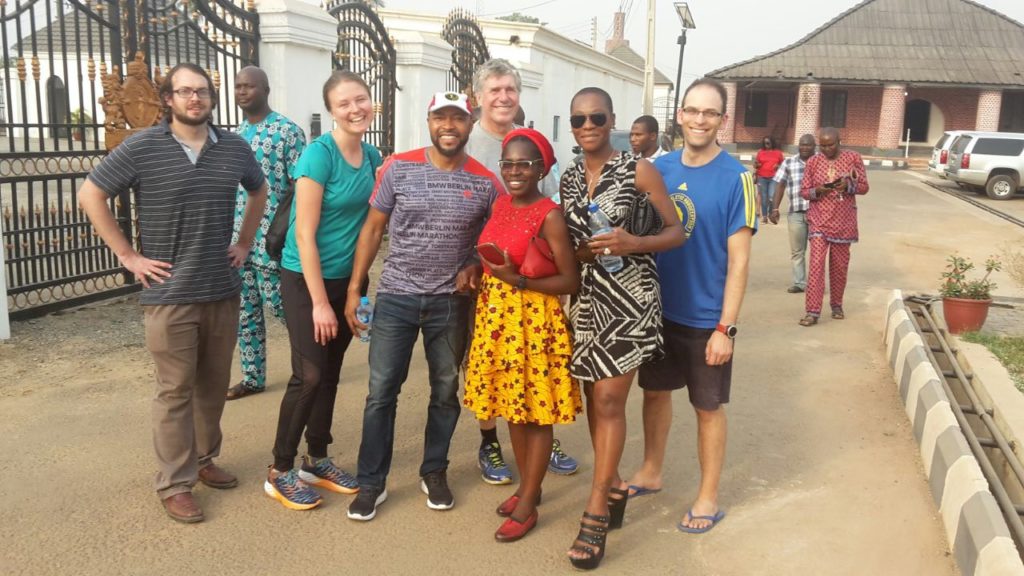 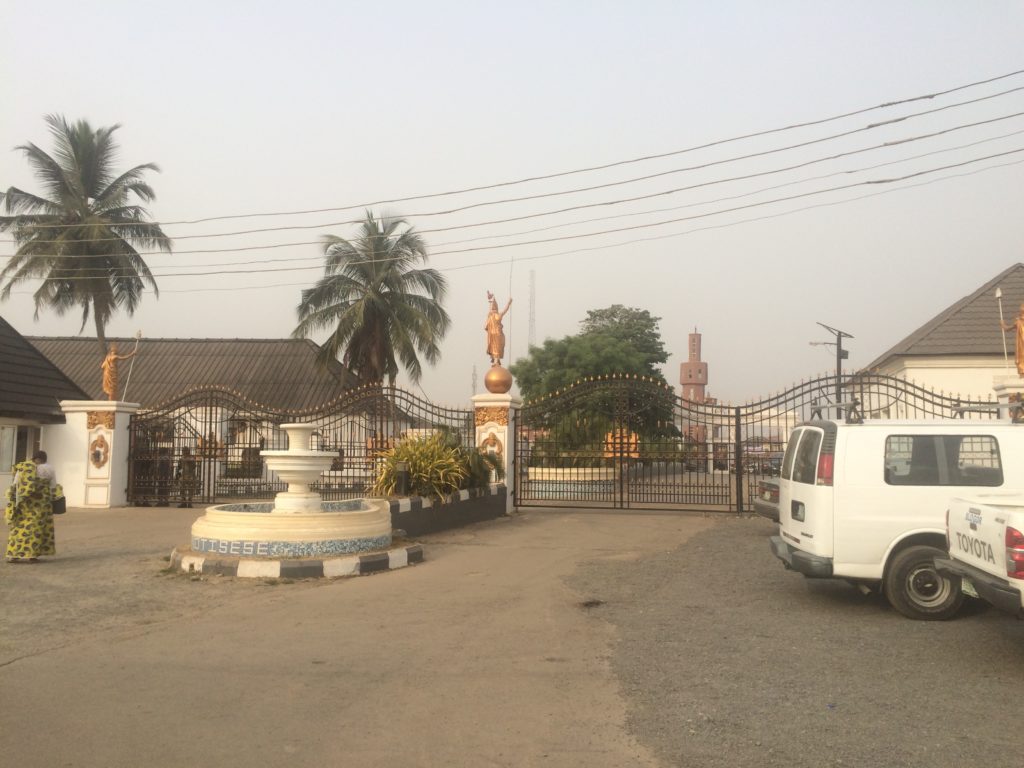 We were honored to have a meal with the Ooni of Ife himself, one of the most prestigious of the traditional rulers in Nigeria.  He granted us his blessing, and assured us that the winds of Ife would be at our back all the next day, so that we would feel no effort as we completed the race. 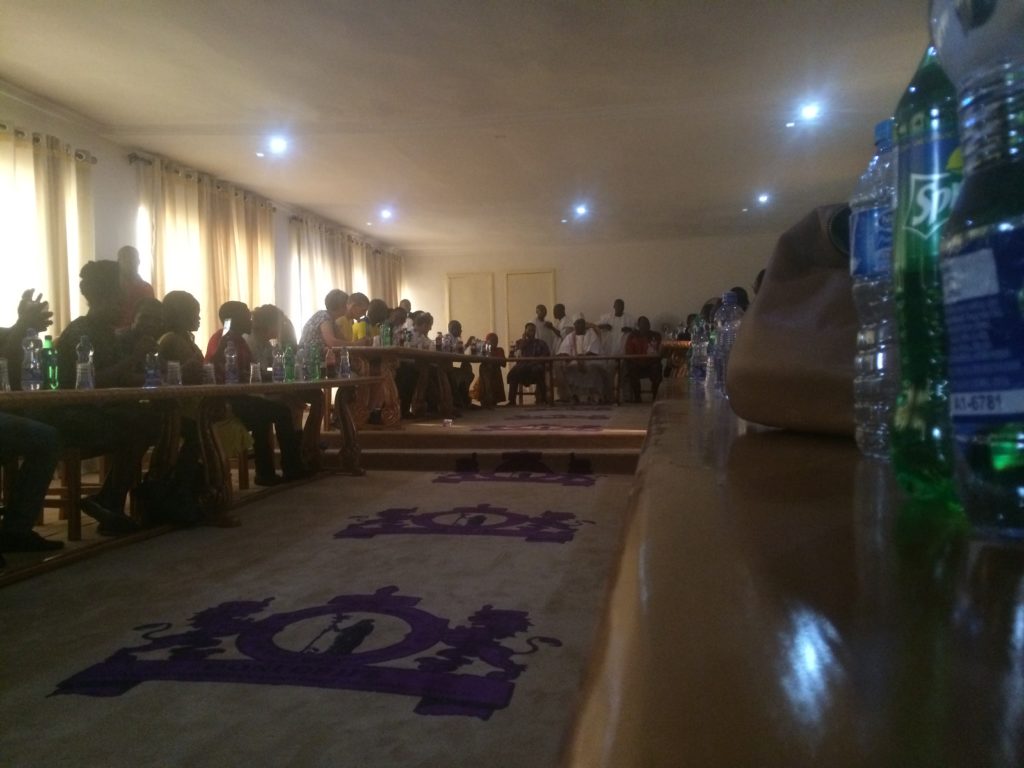 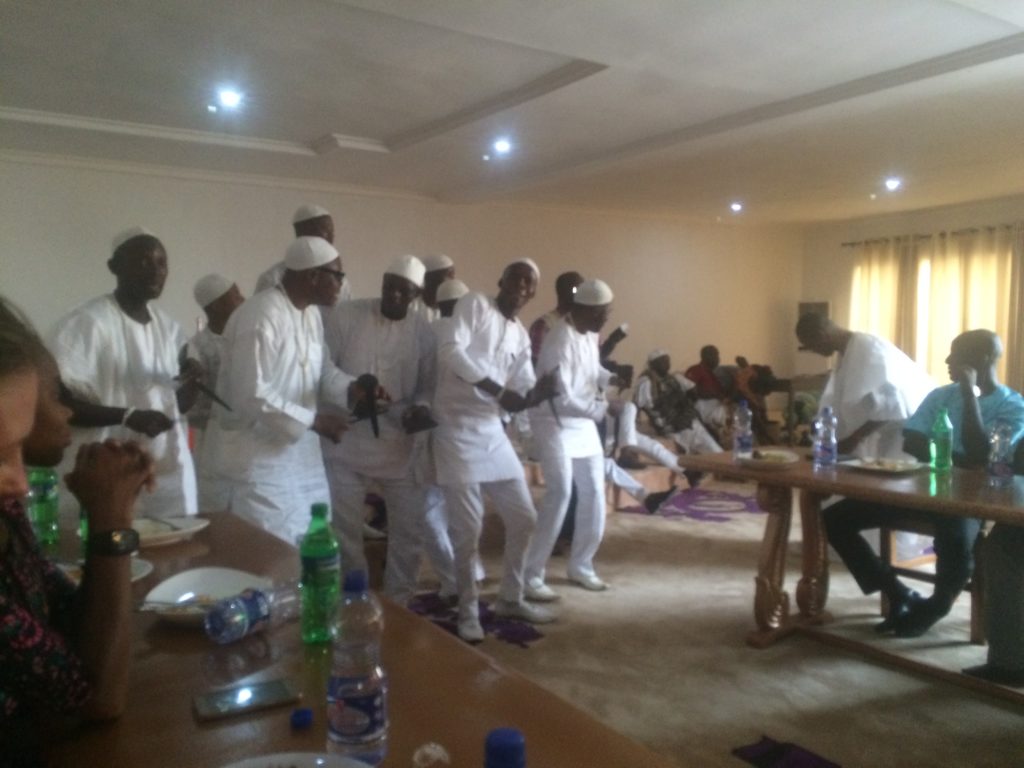 Some of the Ooni’s entourage dancing and playing music while we ate.

We were told that Obafemi Awolowo University is home to one of the largest colonies of bats in Africa.  I can well imagine that this is true.  Many of the trees on campus were FILLED with large bats.  My subsequent research suggests that they are Straw-Coloured Fruit Bats (E. helvum).  Even during the day they are very active, and make quite a bit of noise.  They are big too, approximately the size of a pigeon.  Here is a short video I took while we were at the conference center, after picking up our bibs. 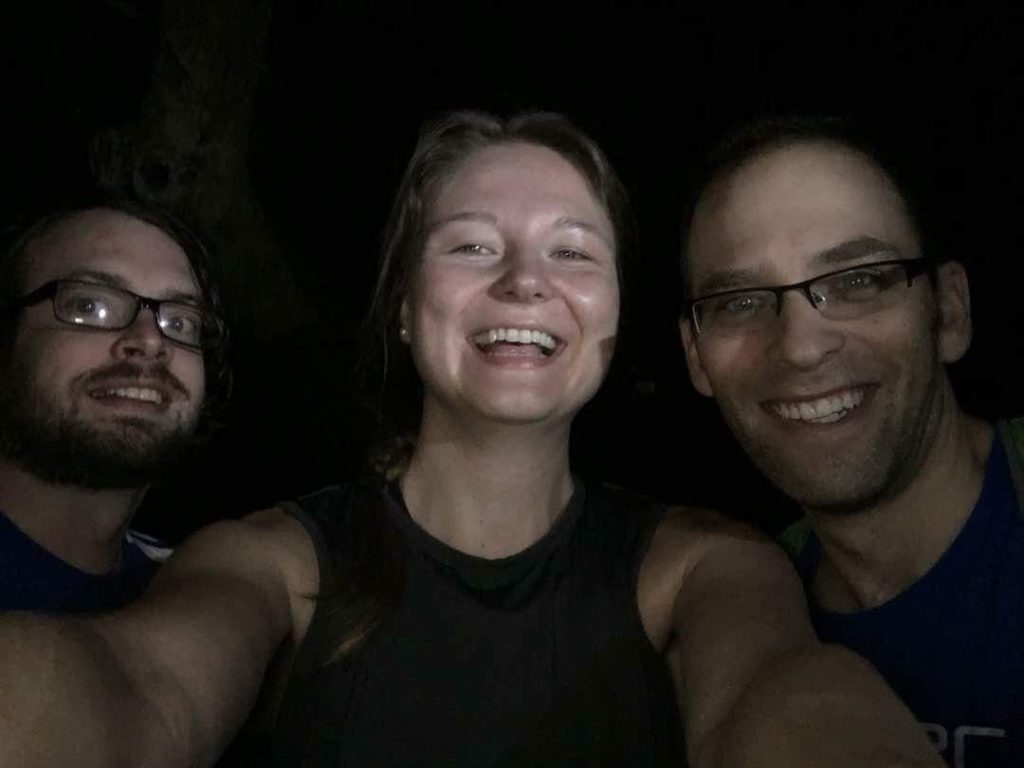 The “before” photo.  We gathered in the dark as the bats wheeled overhead, and set out with headlamps.  The first half or so of the course was a series of out-and-backs on the sprawling OAU campus. 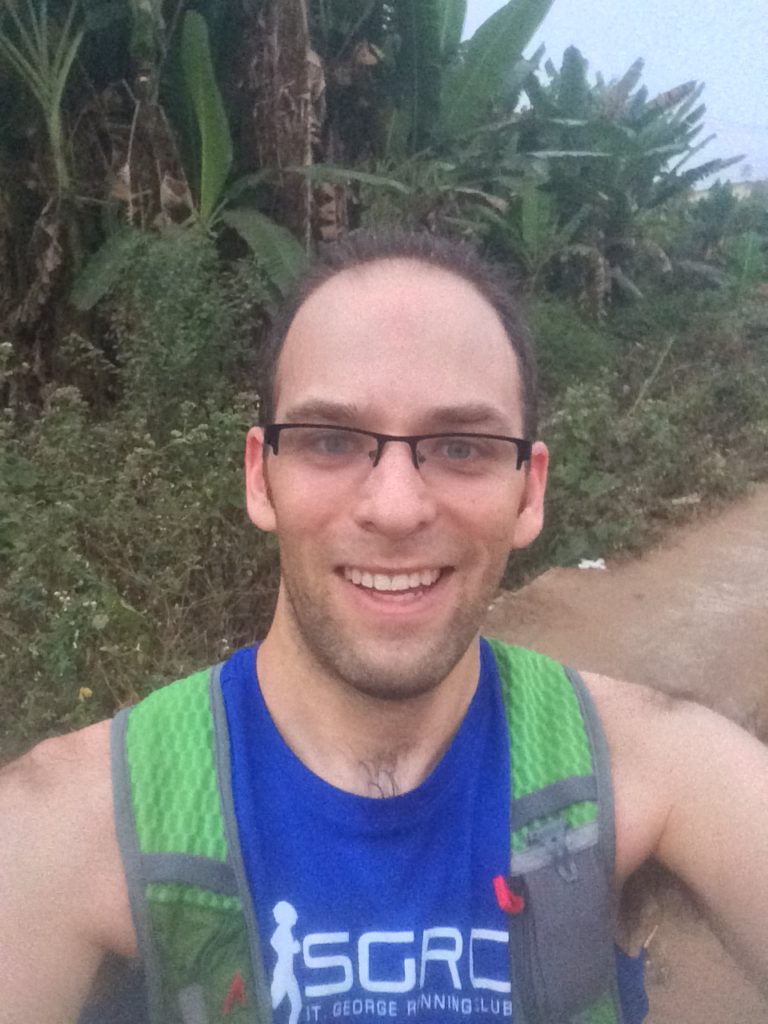 By about the 2 mile point the sun had risen enough that I no longer needed my headlamp. I decided to sport my St. George Running Club jersey. 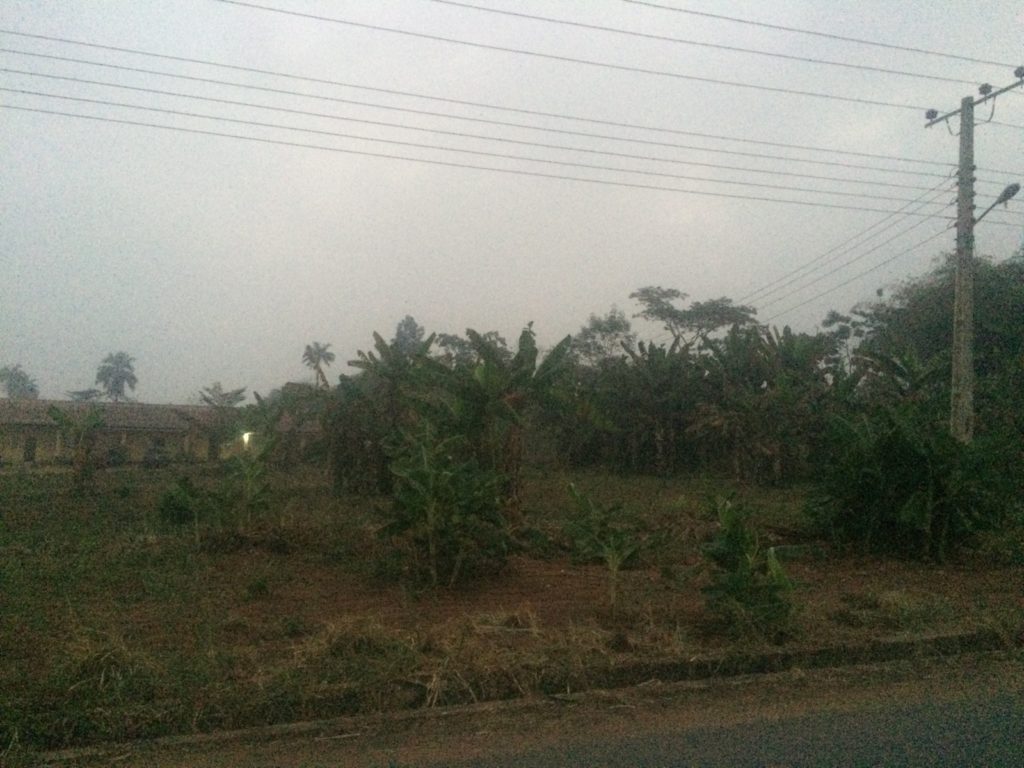 It started out nice and foggy, which actually felt very cool and pleasant. According to my watch it was a “mere” 78F at the start. 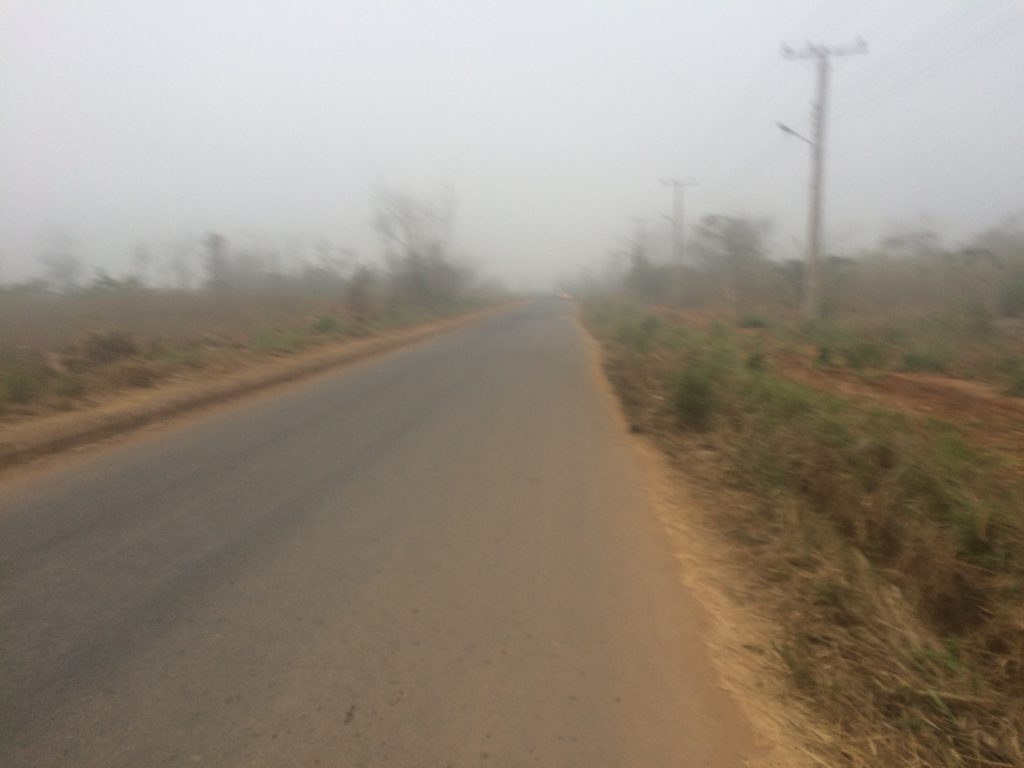 Large sections of campus are seemingly undeveloped jungle. It was really quite pretty. 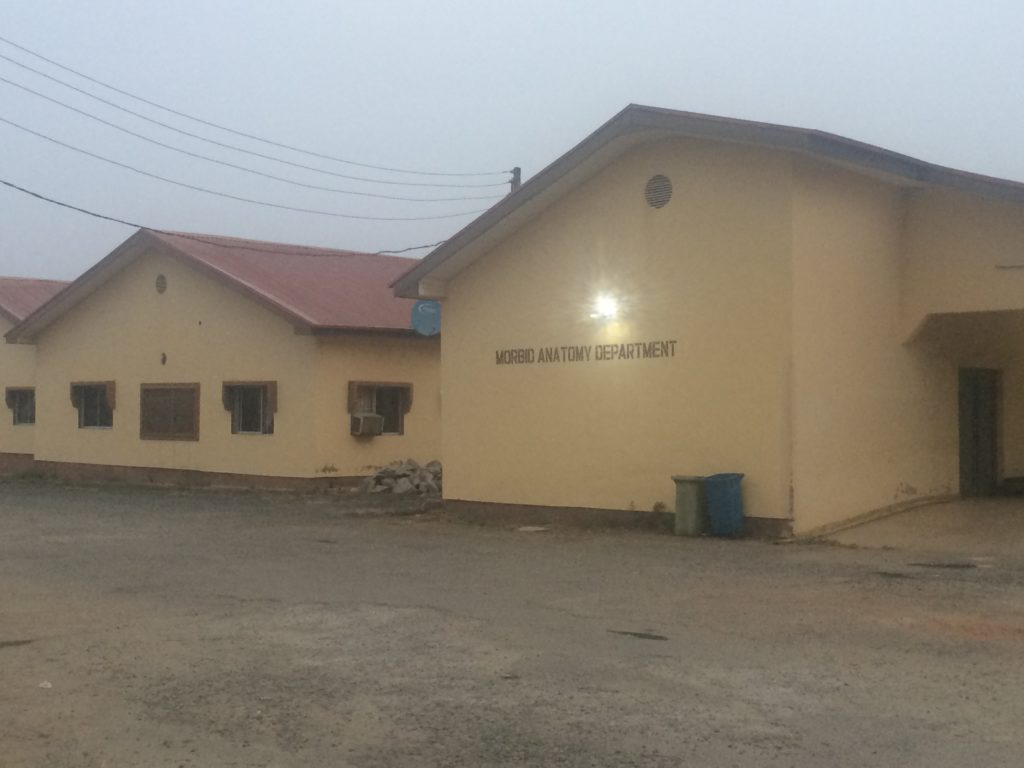 The first out-and-back, at about the 4 or 5 mile point, was near this building. I laughed and took a picture, hoping I wouldn’t need to be in the building by the end of the day. 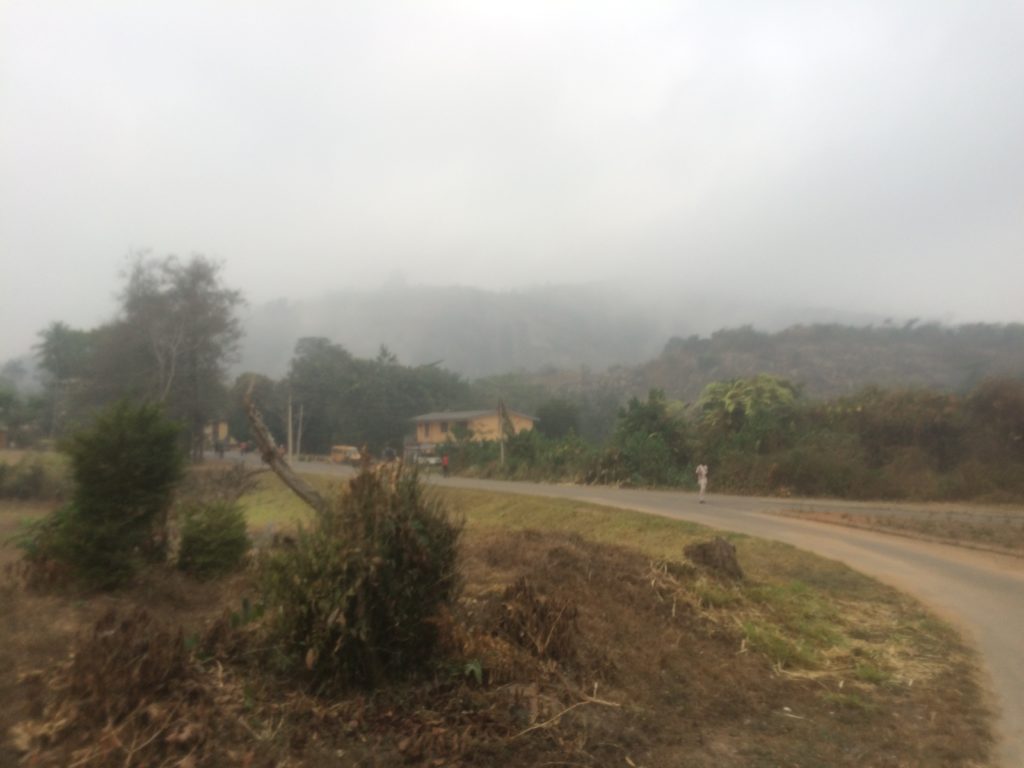 The next turnaround point was up a series of hills. These are the first mountainous geographic features I’ve seen in Nigeria. 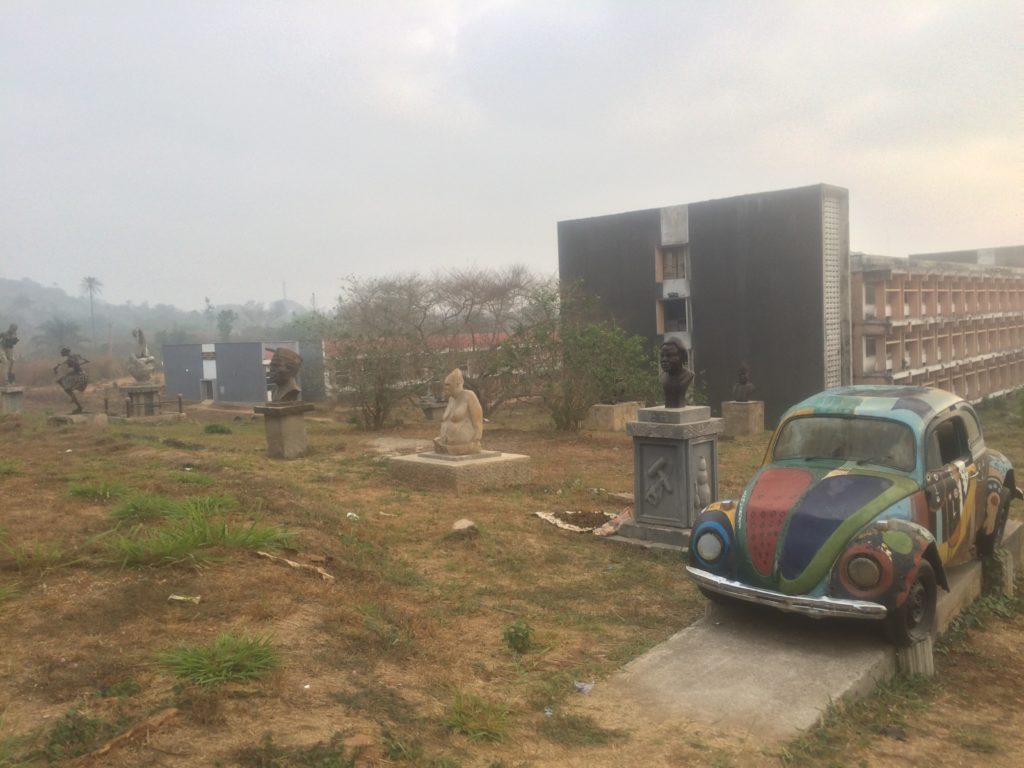 Artwork on display outside the Department of Fine Art. 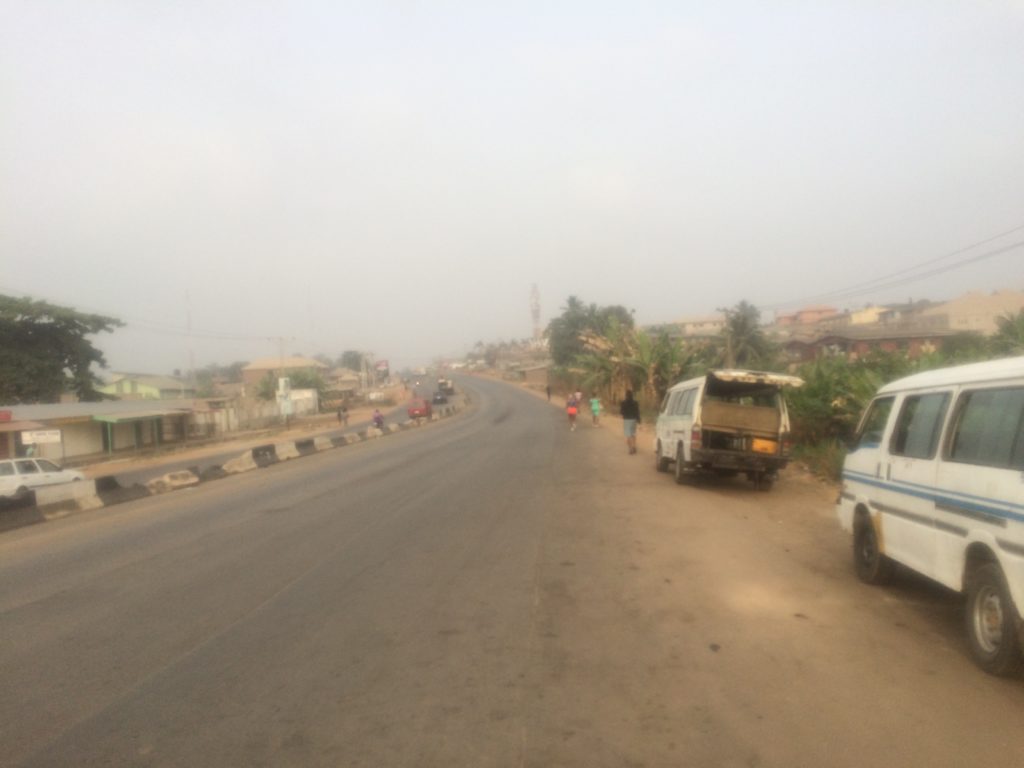 At about the halfway point we left campus, and started the final out and back, up and down the main road running through Ife.

By this point, I was tired, hot, and I had run as far as I had in any 1 run since the Boston Marathon last year.  I really need to start doing a full training season before marathons again.  They are much more fun when they are over in 3 hours than when it takes 5 hours+.  Nevertheless, took it one kilometer at a time, walked a lot, and continued. 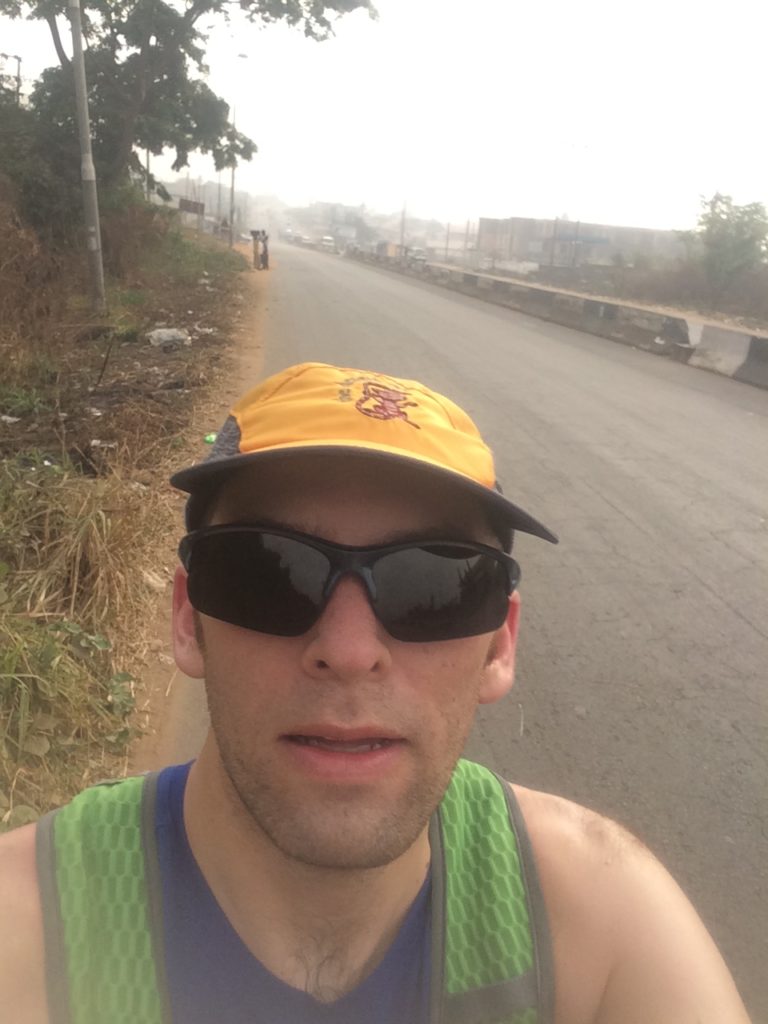 About the 15 mile point. Feeling much less fresh than I was at the 2 mile point. 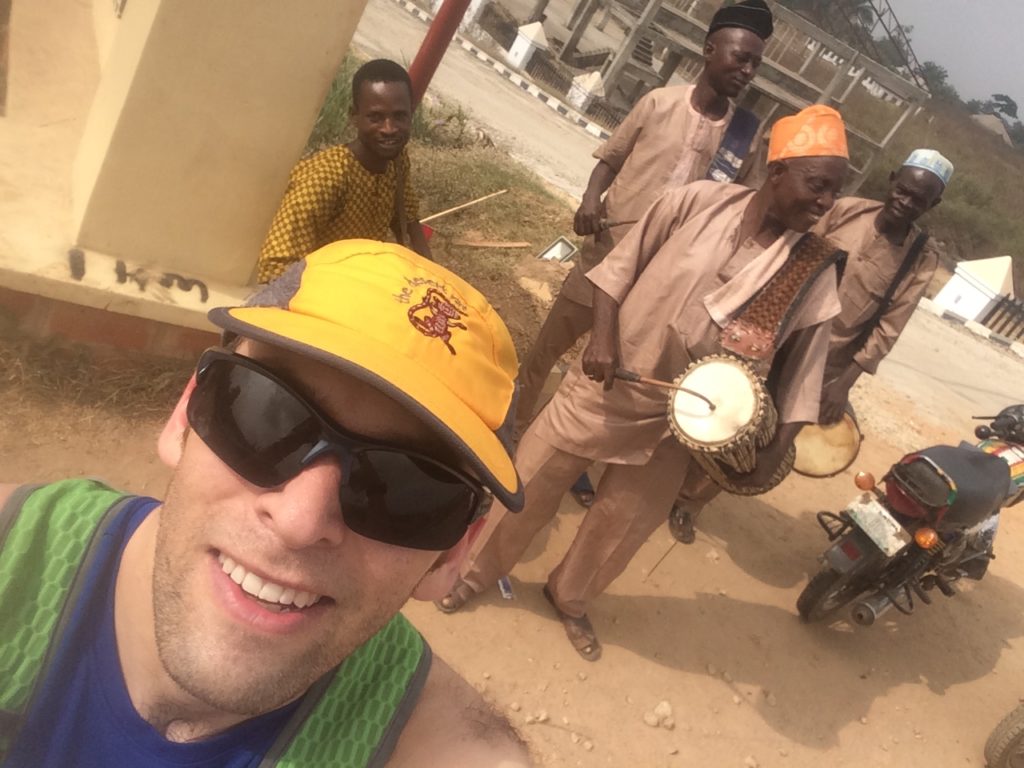 There were occasional groups of drummers or other musicians along the course. I’ve always liked having live music on the course during races, ever since I first experienced it at the Big Sur Half Marathon in 2013.

The last 8 miles or so were generally uphill.  Not super steep, and ocasional rollers which gave brief respites of downhill, but a gain of about 350 feet over that distance.  At this point it was a long walk with occasional moments of running. 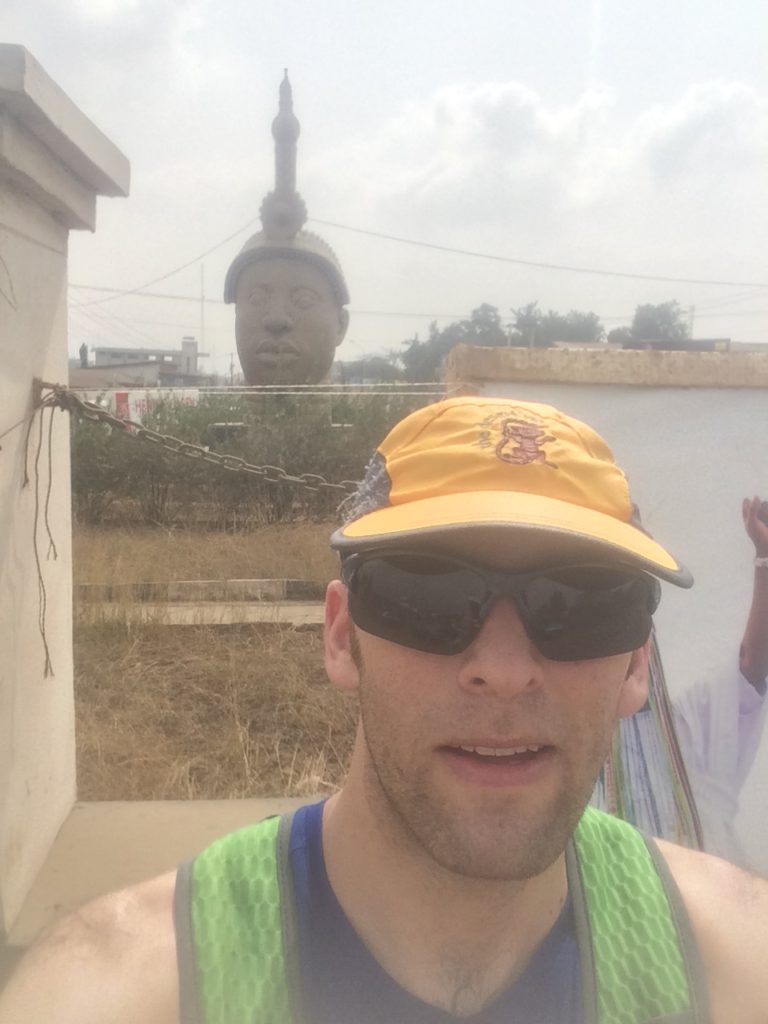 This statue is Oduduwa, the father of the Yoruba people. He is also featured on my finisher medal. Roughly mile 23. 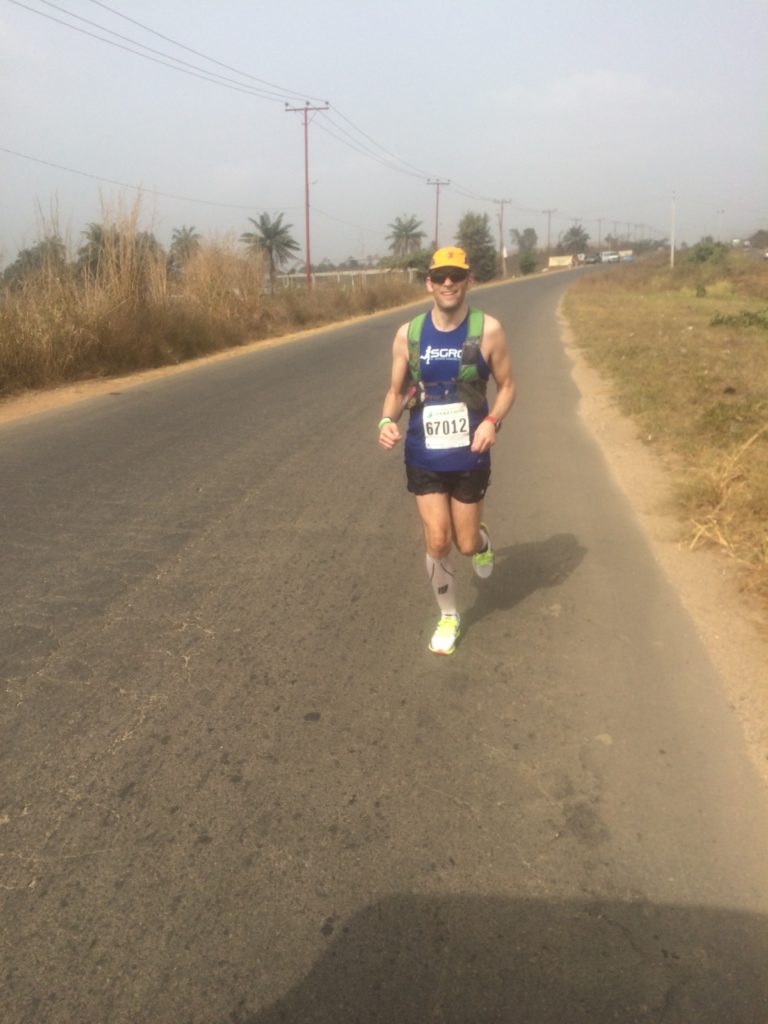 The course was not closed, so there was traffic throughout, but there were several police vehicles at places where the course narrowed and some roaming along the course to keep us safe. One of them offered to take my photo, which I gladly accepted. They also offered to let me ride in their car for a while. Very nice of them, but also not why I participate in marathons. I wanted to earn it myself.

The finish was cruel.  After going uphill for the previous 8 miles, we went back and forth past the palace twice before being allowed to enter.  Oh well.  There is something magical about marathon finishlines.  The amount of effort that goes into completing a marathon seems to all well up at the end and it’s hugely emotional.  At this finish line there were flags hung for each of the 8 or so nations from which the participants hailed.  I was SO proud, even with a 5 hour and 23 minute finish time, to have my photo taken with the US flag.  Unfortunately, I haven’t been able to track down any copies of that photo yet.  If anyone has one, let me know.  There was quite a party going on, even though the race was fairly small, only about 40 runners. 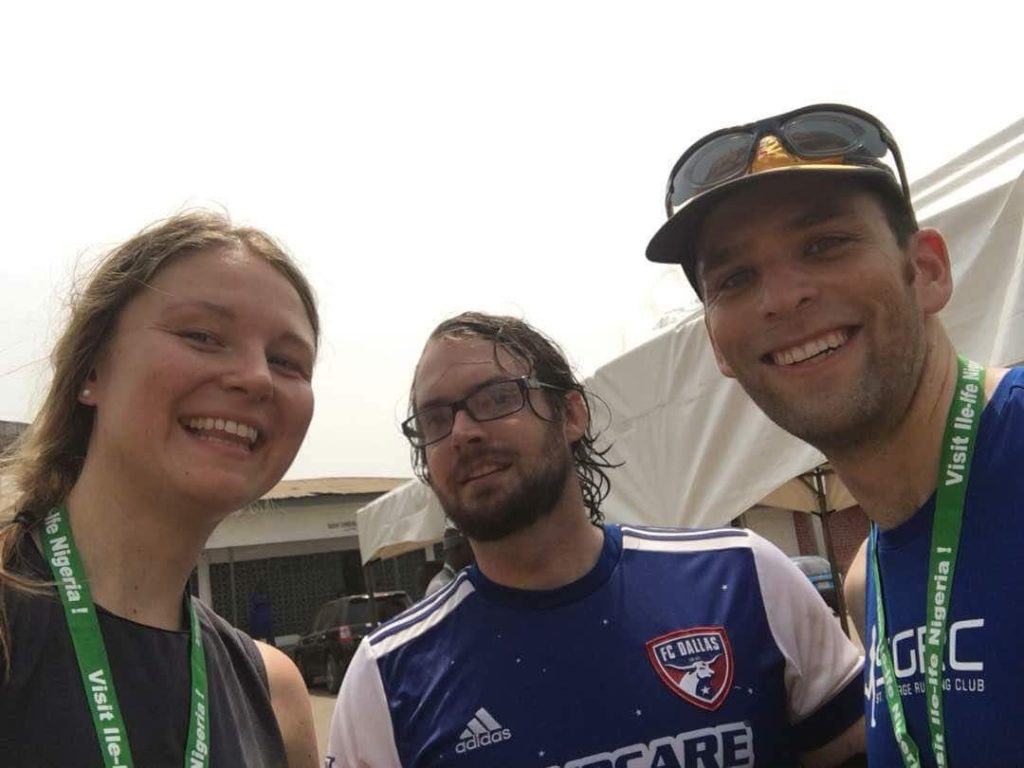 Total time 5 hours 23 minutes.  This was my slowest marathon to date, but I’m glad to have done it.  I hope to be able to complete a marathon in every country to which I am posted, and maybe with a better cycle of training, next year’s Lagos Marathon may be within reach to finish in a time closer to the times I used to run.