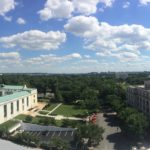 A week ago or so I received an email inviting me to the Swearing In Ceremony for the newly confirmed Deputy Secretary of State.  I initially thought that it had just been sent to the whole Department, and planned not to attend.  It was then pointed out to me that the email had been directed specifically to the members of my A-100, and that we had actually been voluntold to attend, rather than simply invited, and that the Deputy Secretary wanted a photo with us.  I opened the invitation back up, sent in my RSVP, and planned to make my way to the Franklin Ballroom for the ceremony.  This morning I dutifully put on a suit instead of my more typical comfortable FSI clothing.

This worked out well, as I had a hot lunch date today!  Dy picked me up when I got out of class, and we went to enjoy our reservation at the Van Buren Dining Room, which is also on the 8th floor of the main State Department building.  We really enjoyed our meal.  The view out over the National Mall was spectacular, and the food was excellent.  I would definitely recommend it.

I worked on my homework for Monday morning, and then met up with my classmates as directed.  We were escorted up to the 8th floor and got to explore the diplomatic reception rooms for a little while. 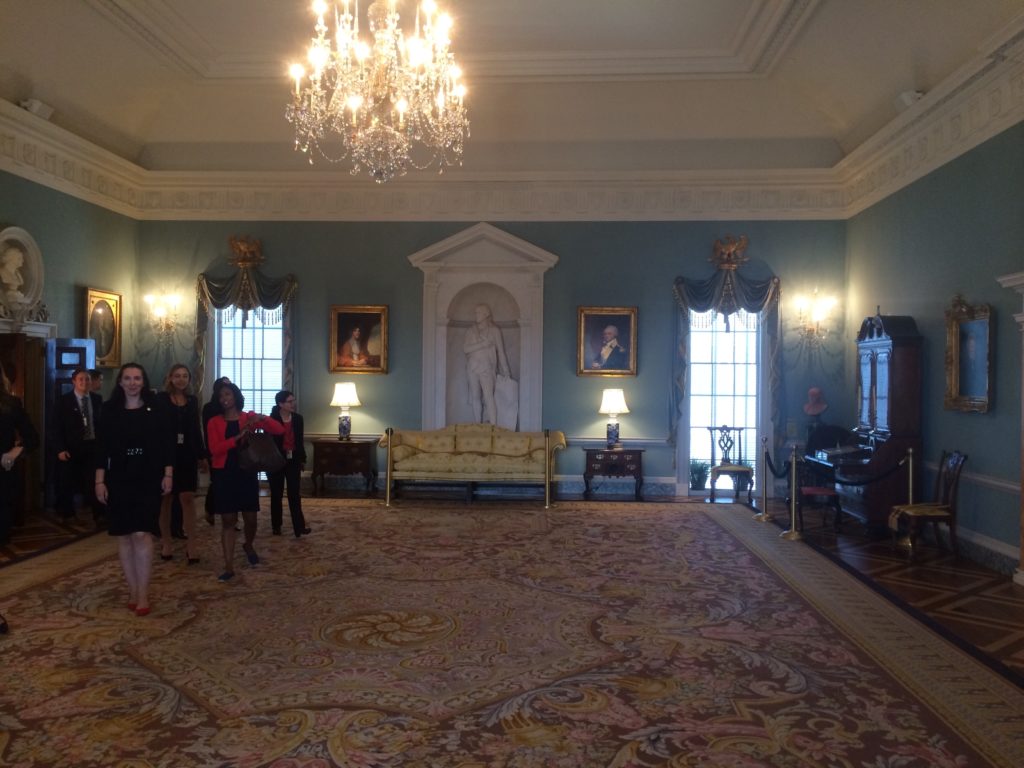 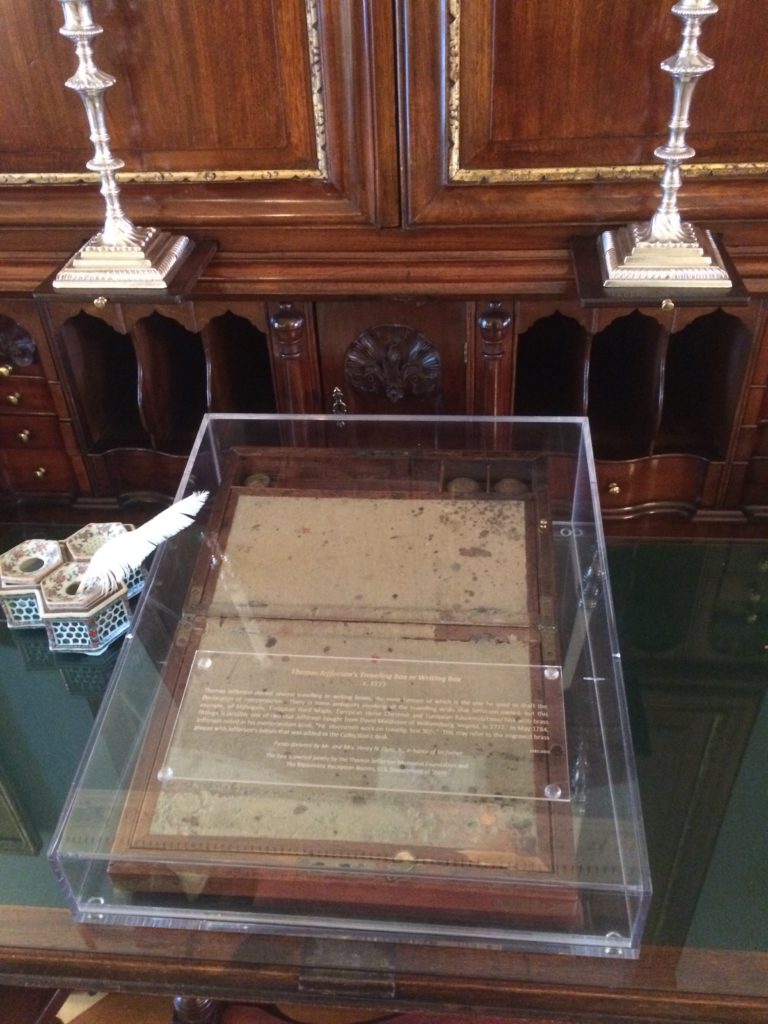 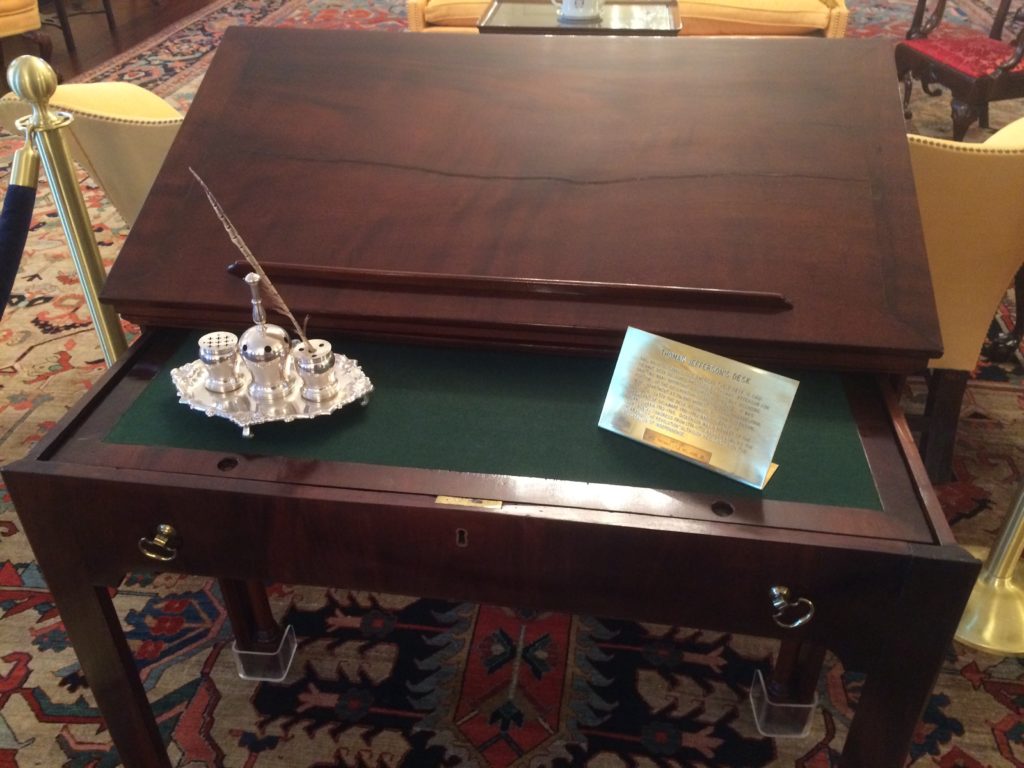 The Desk on which the Treaty of Paris was Signed 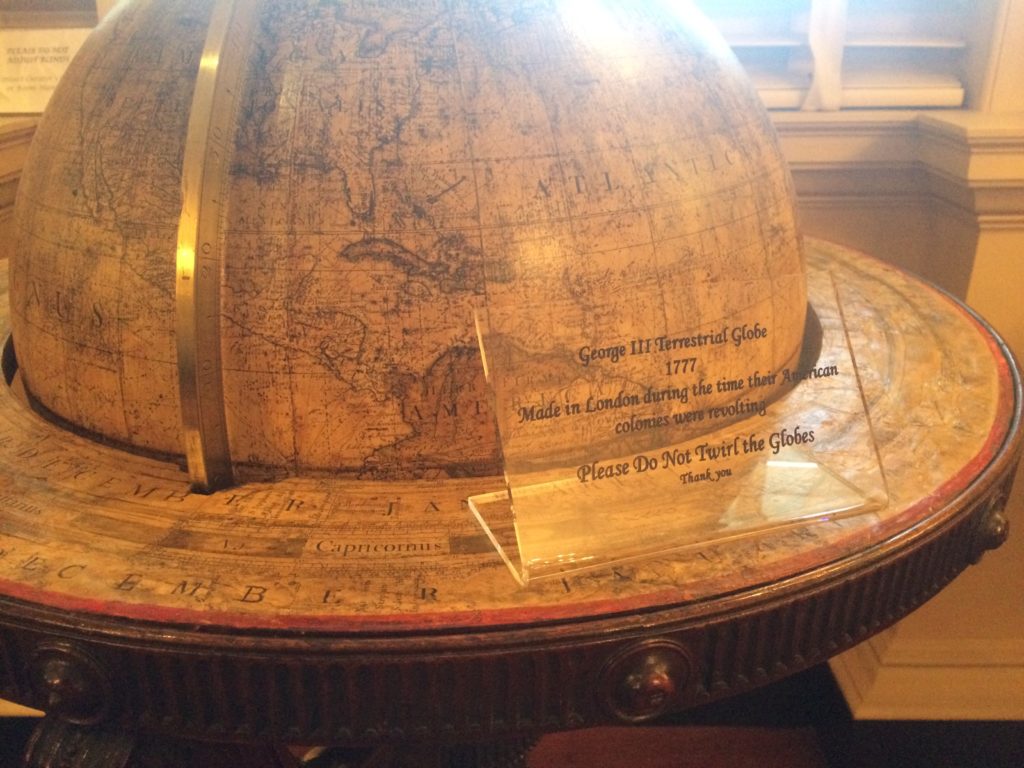 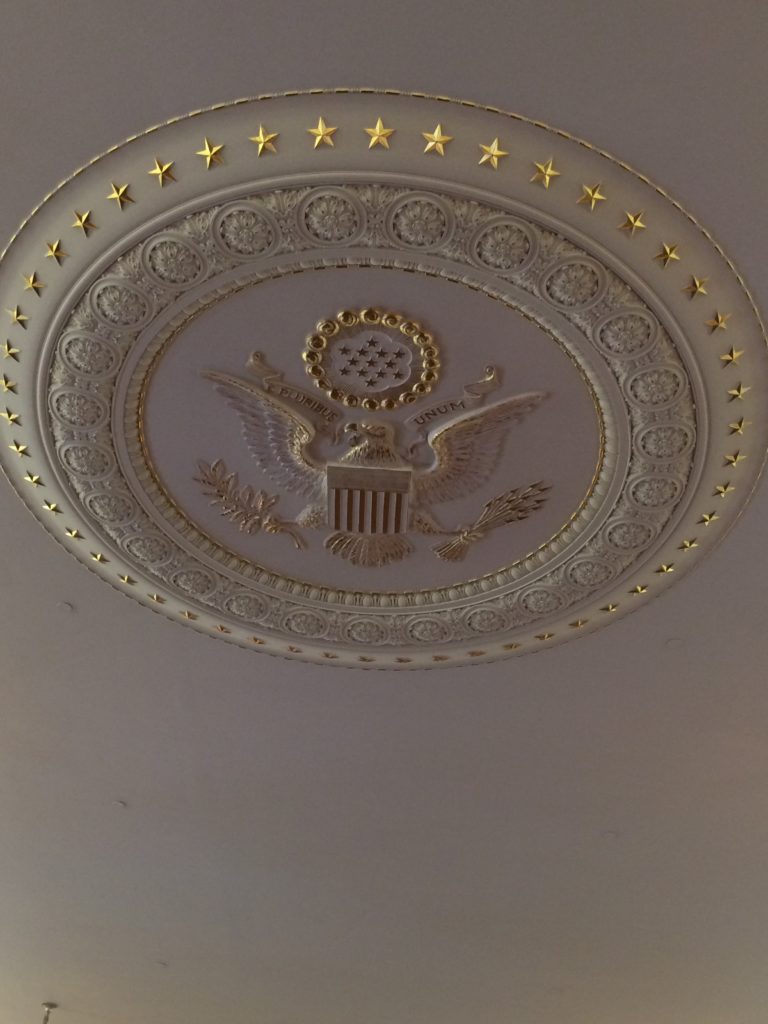 The Great Seal on the Ceiling of the Franklin Room

After a few minutes of checking out the artifacts, we were gathered together for a dry run of our photo-op.  Someone from the Office of the Chief of Protocol directed us, “This is where you will stand during the ceremony, and then this is where you will come up onto the stage from, and this is where the Secretary and the Deputy Secretary and the Chief Justice will stand…”  That’s right, the Deputy Secretary was sworn in by Chief Justice Roberts of the Supreme Court!   We then had a few more minutes to enjoy the rooms and the view before the ceremony started. 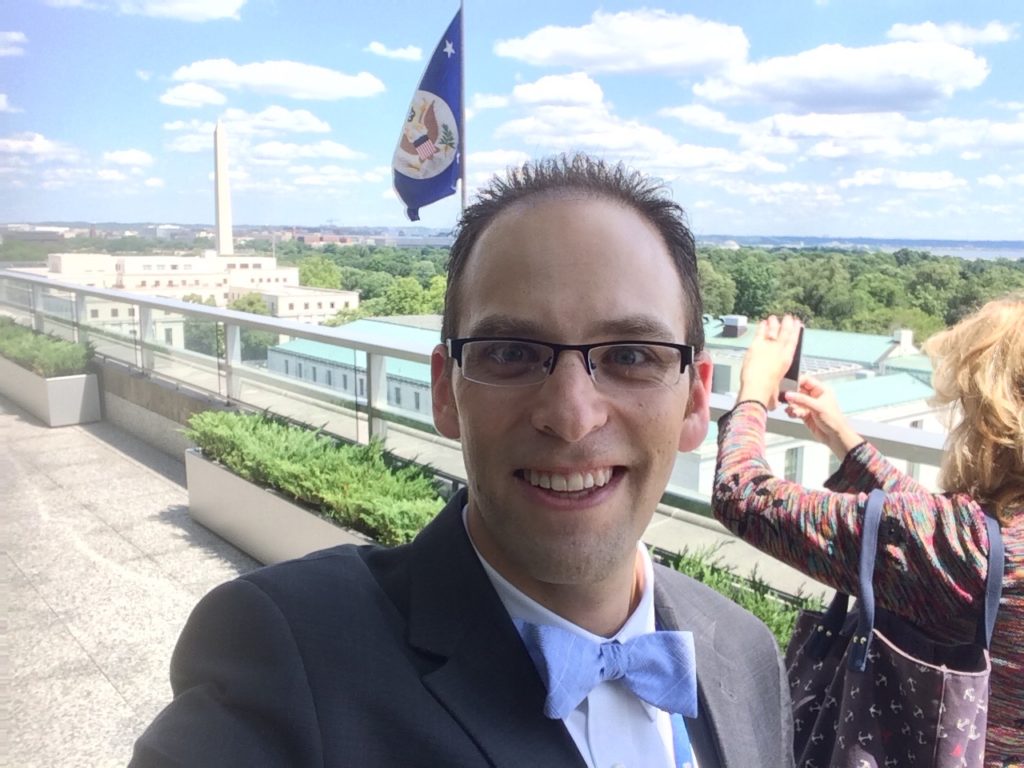 Panoramic of the View

Finally, the proceedings got started.  The VIPs came into the room, and Secretary Tillerson gave a very nice introduction to Deputy Secretary Sullivan.  It was surreal to be in the same room as the Secretary of State and the Chief Justice of the Supreme Court. 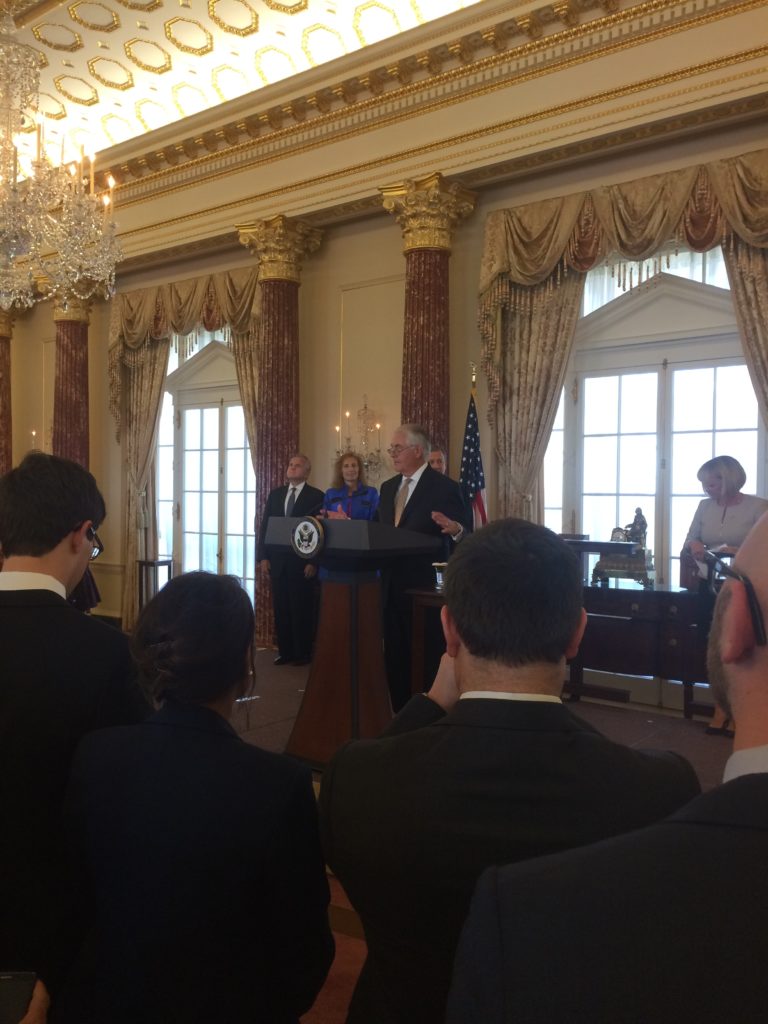 Secretary Tillerson (and the backs of some of my colleagues’ heads) 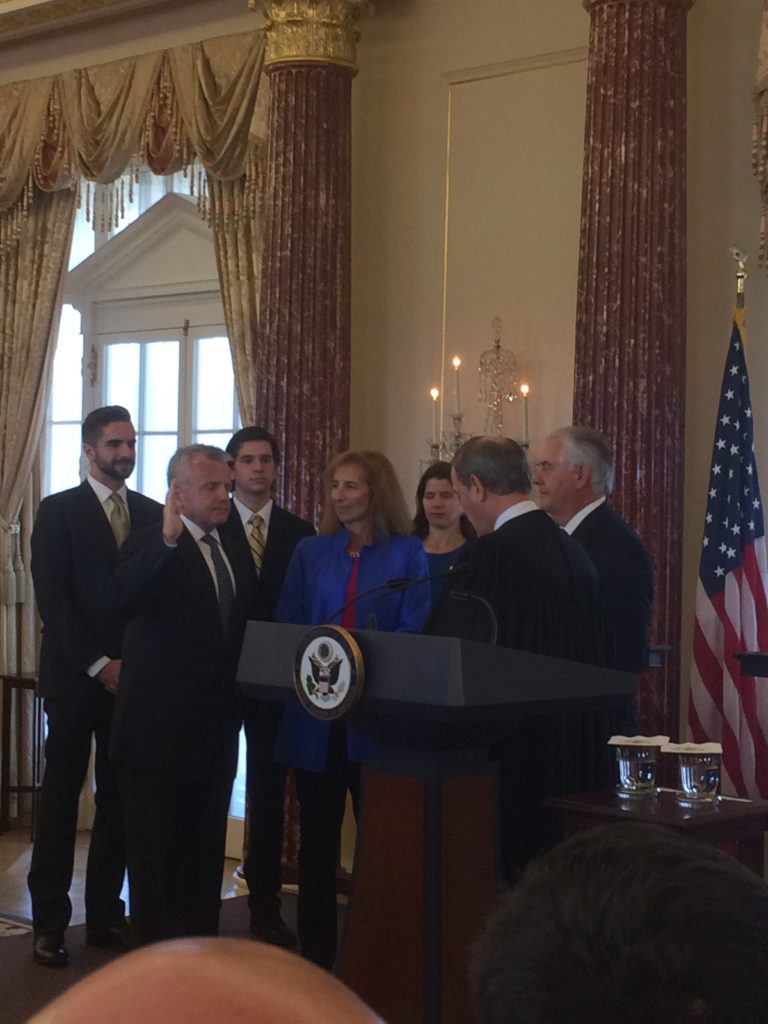 After the Deputy Secretary gave a speech, in which he graciously acknowledged that our class was there and thanked us for coming, we had our photo op.  I’ll post a copy of the photo when I get it.  At the end of the photo op, a few of us, including me, were able to shake the Secretary’s hand.  There was also a receiving line, and a few of us waited in it to thank the Deputy Secretary for inviting us (it is a fairly unique thing for Entry Level Officers to be invited to an event like this), and got to speak with him for a few minutes.

This job continues to give me surreal moments.  I’m proud to be a part of our country’s diplomatic corps, and I am excited to get out to post and start the work!