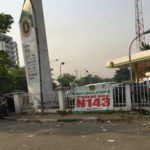 There is a gasoline shortage in Nigeria right now. Which is crazy considering this is an oil country! This happens every so often here for various reasons. Each time there is a different claim as to why. This article is couple of years old but it shows many of the reasons that are routinely blamed for this ongoing crisis.

Why is there a gas shortage in Nigeria?

Traffic for most of the month of December was a beast to be reckoned with! It should also be noted that I am driving myself around and driving often. You would be impressed with how aggressive I have become. Every one is out and about buying Christmas gifts and working hard to try to make a buck before the holidays. People are coming to Lagos from communities further away to purchase items and visit family and friends. Busses packed to the brim taking people away from the big city to eagerly awaiting family in smaller villages. Once the last few days before Christmas arrived it started to calm down a bit. But there was still traffic at certain intersections. It took me a while to realize it was because people were lined up for block and blocks and stopping traffic waiting for fuel. Such a foreign idea to me. Speaking to my father in law about this issue he commented “Yeah we had that in the US about 20 years ago.” I had to point out that this was during the 1970’s and was closer to 40 years ago than 20. 🙂 As such I had not personally experienced it.

On Christmas Eve day Everett Roger and I decided to take the dog for a walk. The roads were pretty much deserted between the holiday and it being Sunday. That is until we rounded one corner and came eye to eye with tons of people waiting in cars. At first I thought they were stuck waiting to cross the bridge to Victoria Island, but then it hit me there was a gas station just up the street. I inquired to a man I passed and he said yes they were waiting for petrol, a phrase I am becoming more accustomed to. When I remarked “Good grief!” He replied “Welcome to Nigeria!” Roger and I decided to mix up our walking plans and count how many vehicles there were in line waiting for gas. I will share some photos before I share the grand total with you so make a guess……. 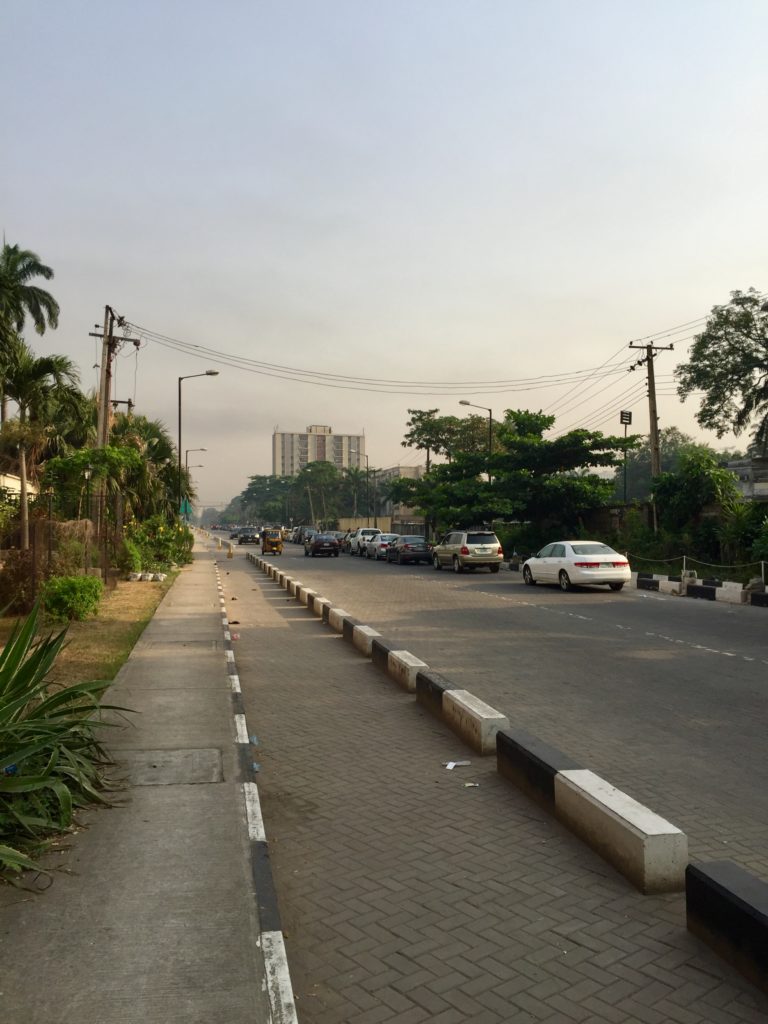 The back of the line 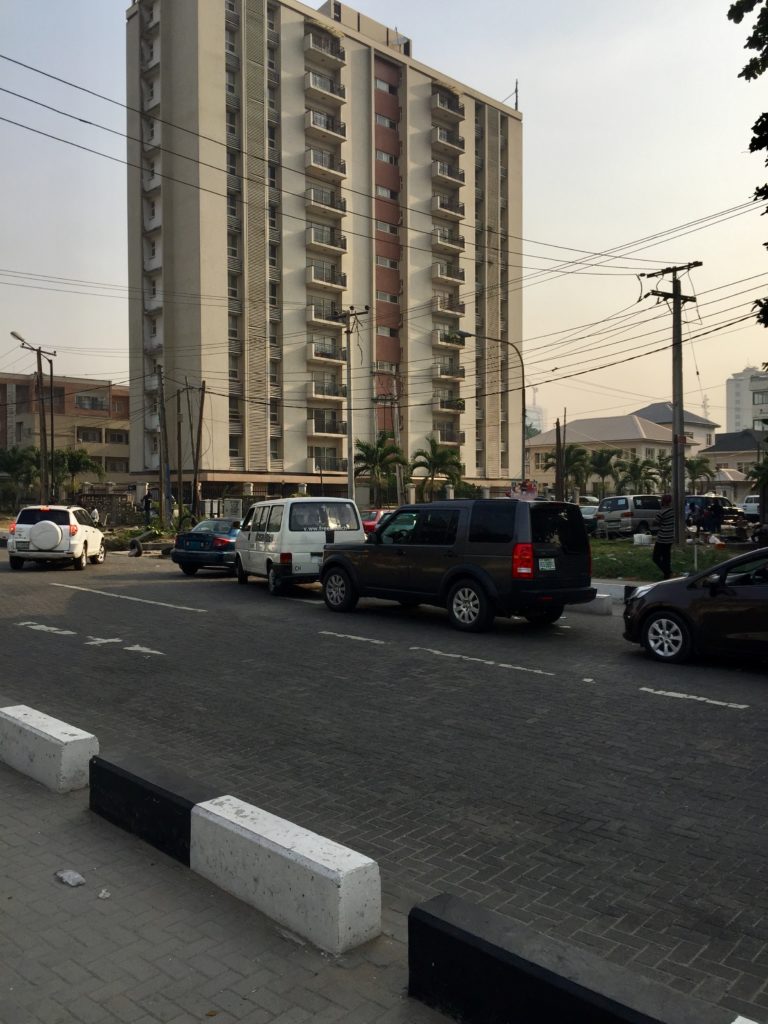 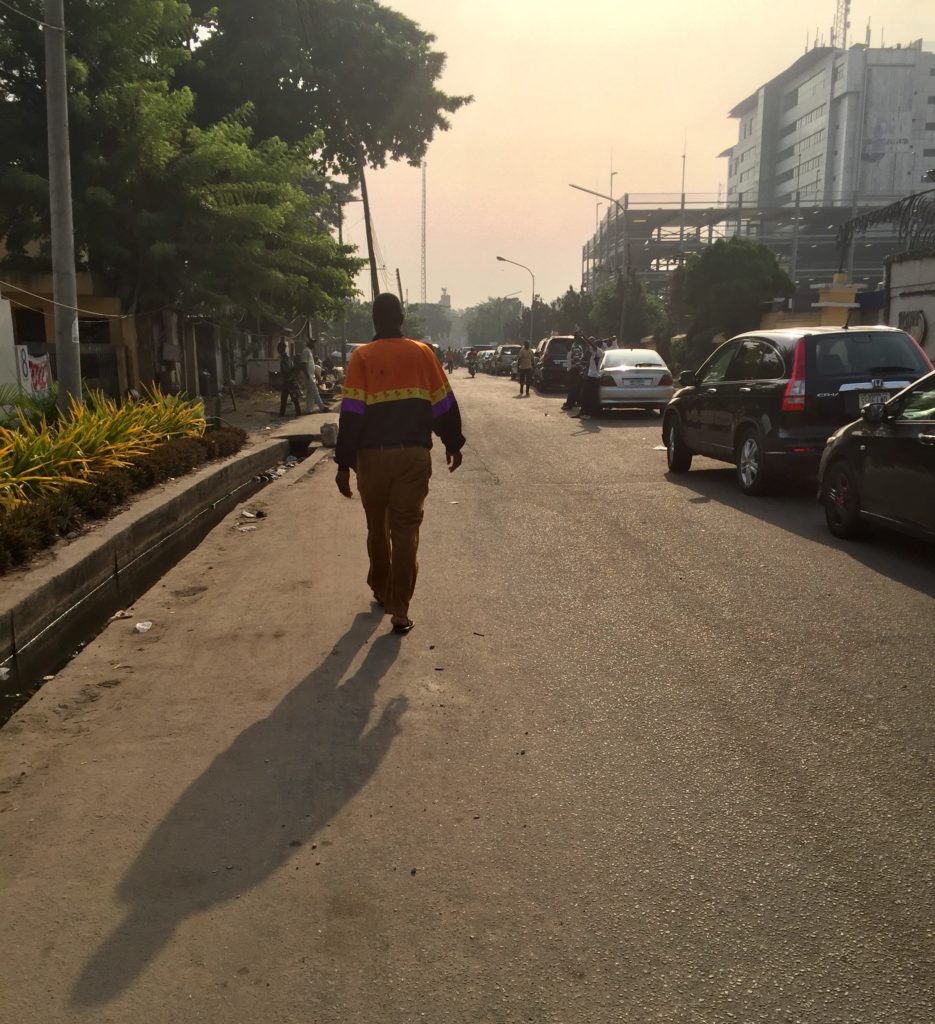 You can really see the Harmattan filled sky. Another block to go. 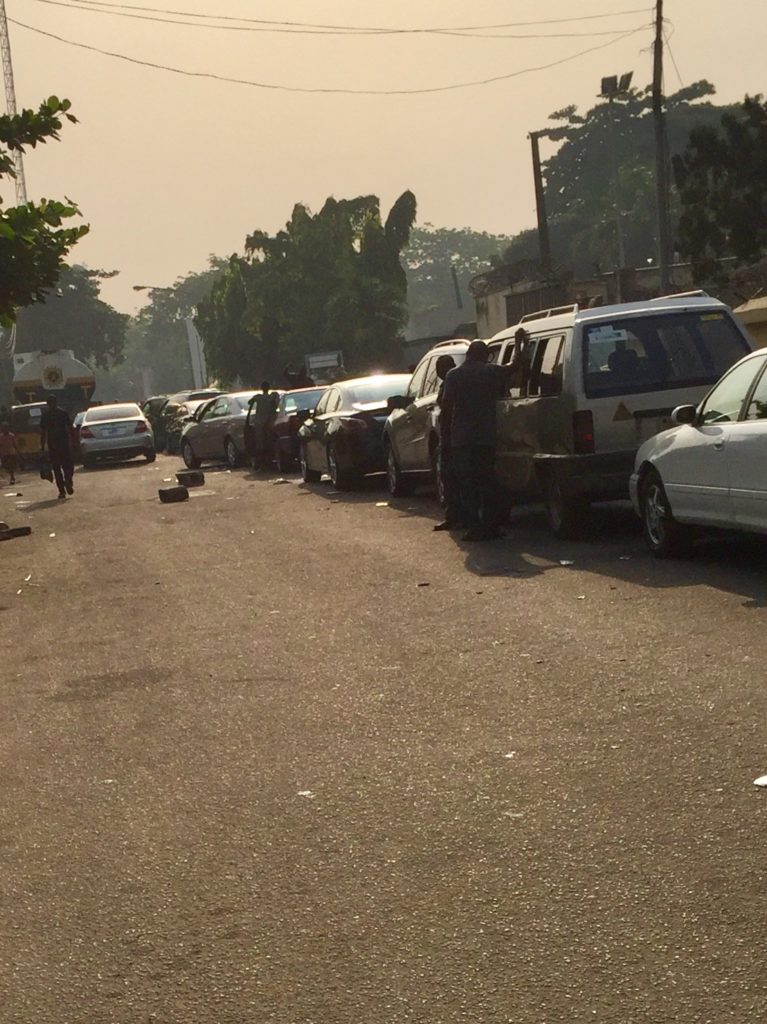 Most people had their vehicles turned off and many were outside socializing or sleeping. Tires, trash and cement blocks were placed in the accompanying lane to prevent people from cutting in line. 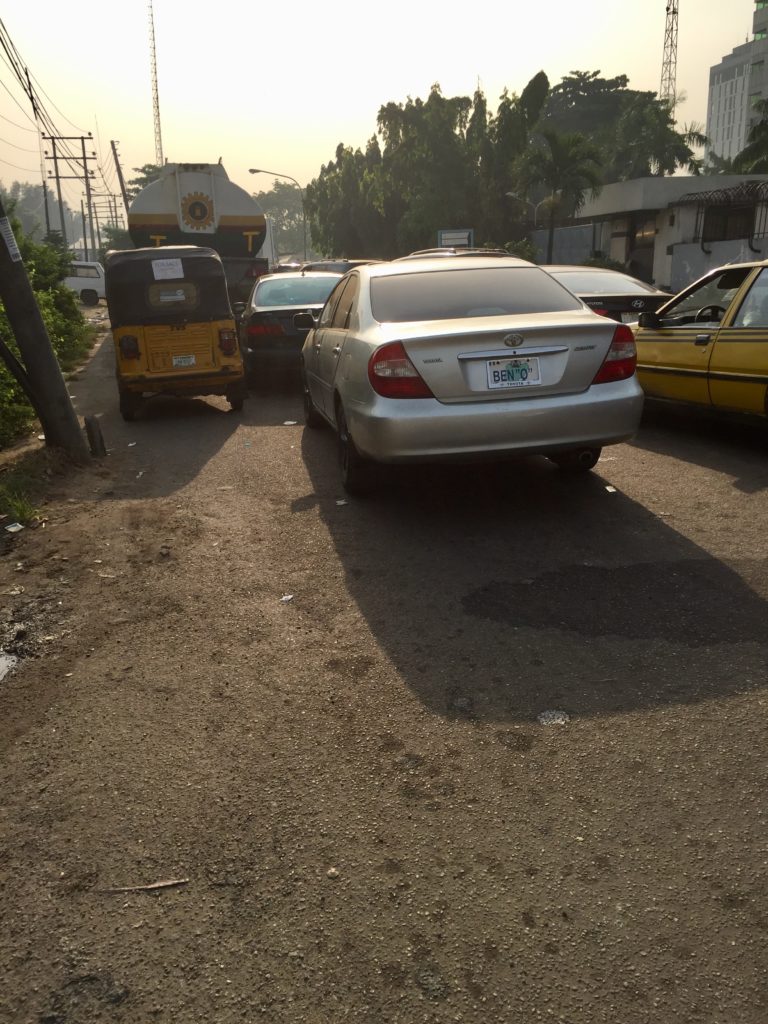 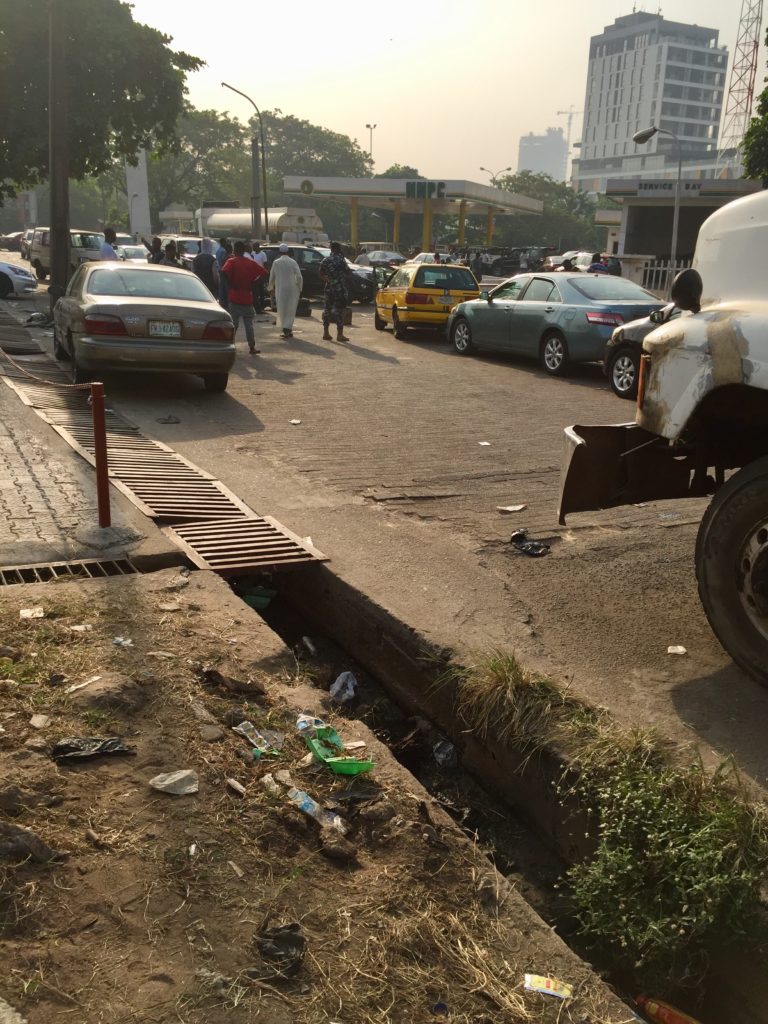 Another block up and the gas station is finally in view. 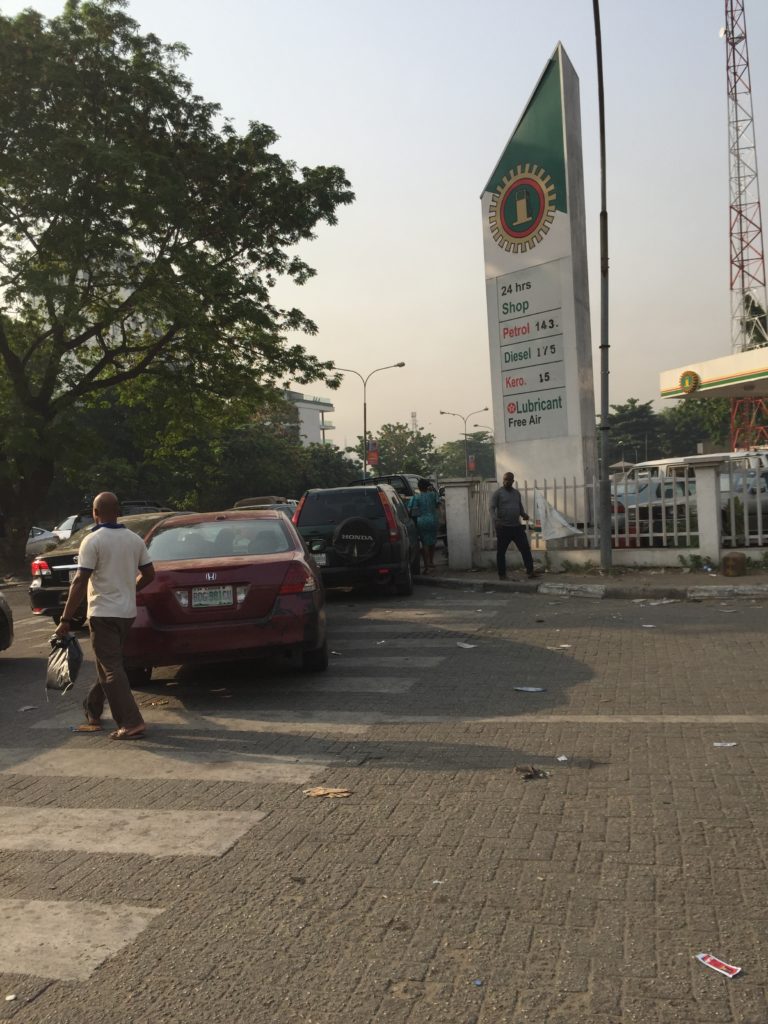 Some people try to be sneaky and sneak in from the main road. They are met en mass with angry competitive consumers and armed police. Keep dreaming man! 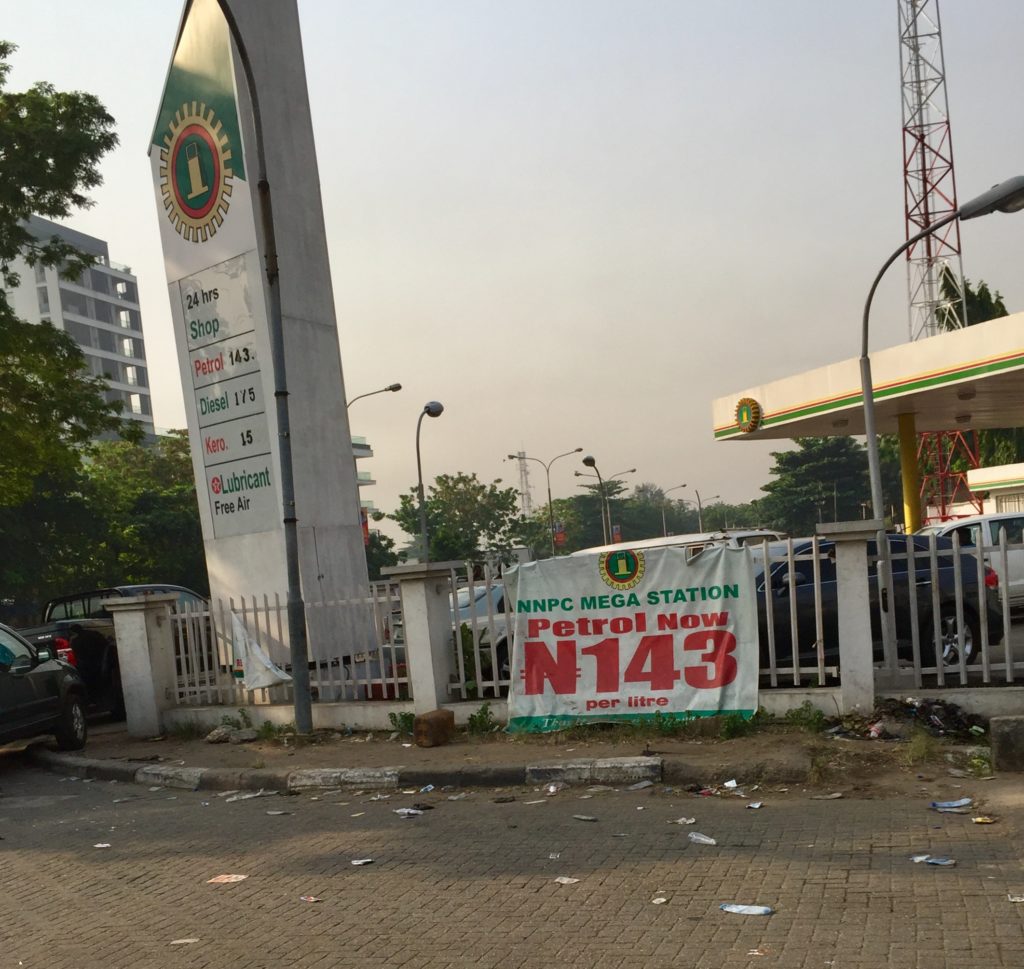 Gas prices are set by the government. At N143 per liter that is equivalent to about $1.50 US per gallon. Gas producers are claiming the current price is not sufficient for them to make a profit. The government claims the producers are hoarding gas to drive up the price. 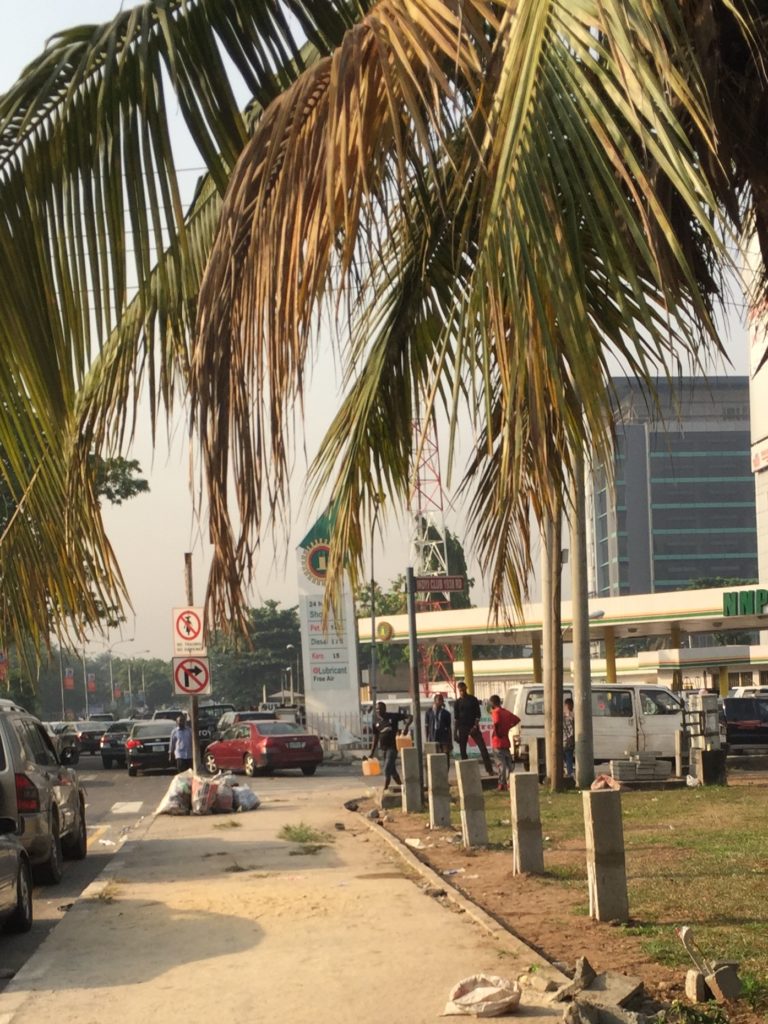 Some capitalizing individuals were selling cans of fuel on the side of the road. When Roger picked up on what they were doing he proclaimed “He is a genius, he will make a fortune!” The hawker smiled. Roger has always has been my little entrepreneur.

Once again we are fortunate and the State Department takes good care of us. We have our own gas pump and we purchase fuel coupons from the Consulate to fill our vehicles with always available and clean gasoline to ensure we have a happy and healthy existence in Nigeria and keep the government owned vehicles running at peak performance. 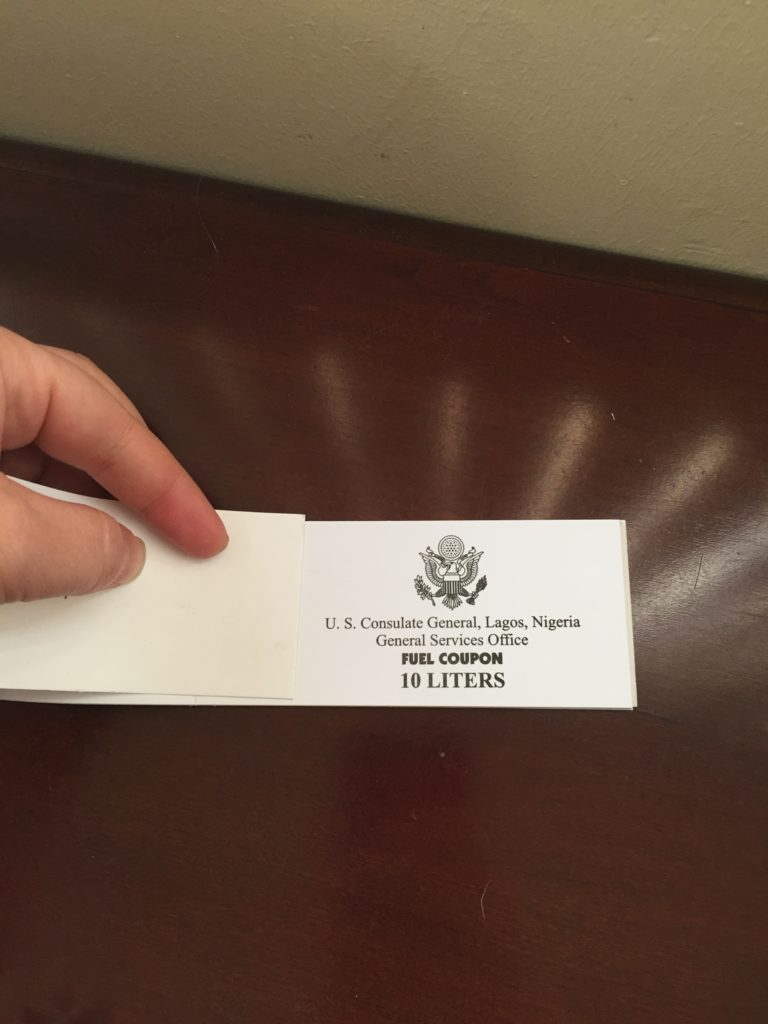 It truly was crazy and there are even busier gas stations on the larger islands and mainland. It is always an adventure.