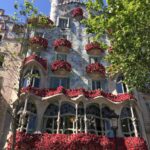 Last weekend we celebrated what is now one of my favorite holidays, Día de Sant Jordi. Legend has it that long ago, there was a dragon that was tormenting the people of Catalonia. It ate nearly all their livestock, and the king declared that lotts would be drawn to select a human sacrifice to slake the beast’s endless hunger. Tragically, the princess’s name was drawn. She went forth to suffer her fate for the sake of her kingdom. At that last moment, the brave Sir Jordi (Catalan for George, a.k.a. Saint George) slew the dragon and saved the princess! In the very places where the dragon’s blood spilled on the ground, beautiful red roses grew. In memory of this event, people in Catalonia give red roses on April 23, Saint Jordi’s Day.

One of the buildings designed by Catalonia’s most famous architect, Antoni Gaudí, has design elements that honor this story. Casa Batlló, the building, had been closed for months, but had a re-opening on Sant Jordi, and we were fortunate enough to get some tickets!

Every year on Sant Jordi, these beautiful roses are added to the facade. We got to enjoy a tour of the building. We’ve seen several Gaudí buildings from the outside as we’ve driven or biked or run around town, but this was our first view from inside one. It was beautiful!

Up to this point, Sant Jordi is a lot like valentine’s day in the U.S., a day to celebrate love and give flowers, and that is principally how it was celebrated for hundreds of years. However, in the early 1900s some enterprising book publishers noted that April 23 was also the day on which Cervantes, the author of Don Quixote, the first novel written in Spanish, died. It was also the day that Shakespeare died. Therefore, they figured, what better way to honor the day than by giving books to loved ones! The tradition caught on. Apparently it became tradition for men to give roses to women and for women to give books to men, though it is now common for everyone to give everyone else books.

My Spanish colleagues at the Consulate were very excited about the upcoming holiday, much more so than many other local holidays. This day is a big deal in Barcelona. Spain was just starting its first (VERY STRICT) Covid-19 related lockdown last year, so all the festivities were cancelled. When I found out about the book-giving tradition, I was all in! These signs started popping up around town.

I found a second-hand English-language bookstore and got some books for my love and my kiddos. I also picked up a Catalan language copy of a published version of Chimamanda Ngozie Adichie’s talk, “We Should All Be Feminists.” (https://www.ted.com/talks/chimamanda_ngozi_adichie_we_should_all_be_feminists?language=en) to give to a colleague at our socially-distanced book exchange at the office.

After we finished our tour and came out onto Passeig de Gracia, the street was filled with book and rose vendors!

I’m told that this year’s festivities and crows were maybe 1/3 of a typical year, but it was really fun! We waited in a short line as they were limiting numbers due to the pandemic, and didn’t stick around for long, as we really try to avoid unnecessary exposure, but I did manage to purchase what may have been the most expensive rose I will ever buy, and a Spanish language book for myself.

All in all, it was a lovely day, happy Sant Jordi to all!