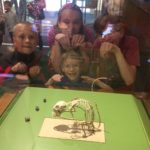 Four weeks down, two to go.  We’ve had several milestones this week.

-Tuesday and Wednesday we went with our colleagues from the 145th Foreign Service Specialist Orientation, which is also going on right now, to an offsite retreat a couple of hours from DC.   I’ve been part of the Follies Committee, which was responsible for entertainment Tuesday evening at the offsite.  I have some very talented colleagues, and it was great to be performing again.  Our skits and songs (and even a dance number) went really well, we had a blast, and our audience of colleagues and trainers, and our class mentor (a former ambassador and Assistant Secretary of State) were very appreciative.  The offsite culminated in a simulated embassy exercise, which was awesome.  It was so cool, even as played my role as Locally Engaged Staff for the Consular Section’s Fraud Prevention Unit, to see each of the generalists and specialists doing their jobs and the whole chaotic scenario playing out like a well oiled machine.

-First pay day was this week.  I’ve had multiple moments over the last month in which I’ve marveled that, as much fun as I’m having while learning to do this interesting work, I’m getting paid even for this part!  This week, in addition to the offsite, we’ve been working on our “core skills.”

-We’ve practiced note taking.  Apparently etiquette dictates that at many meetings between governments there are no electronic recording devices, so each side assigns a lower level functionary (that would be me) as a note taker.  It’s not too dissimilar from taking notes during a witness’s testimony, but there’s no chance for me to get clarification for anything I miss on cross-examination.  I may need to learn shorthand.

-We’ve practiced cable writing.  I’ve been pleasantly surprised to find that, despite being a large bureaucracy, the State Department values a sense of humor.  Just this morning I was perusing my cable inbox, and discovered that April Fools Cables are a thing.  I am going to fit in just fine.

-We’ve practiced public speaking, and composure under fire.  The last is answering rapid-fire tough questions about US Foreign Policy from our colleagues, in a variety of formats (pretend press conference, pretend dinner party, pretend cocktail party, etc.).  More specifically, we’ve been practicing responding to (not necessarily answering) questions in those formats, in a way that allows us to refocus our message on the interests of the US, and avoid embarrassing our government.  As we’ve been reminded over and over during training, while overseas we are representatives of the People and Government of the United States 24/7, not just during working hours.

If it’s Saturday, it must be Smithsonian day.  Today the kids and I visited the Museum of Natural History while my lady love took her turn to be educated at FSI, on protocol and representative entertaining.  Here were our highlights: 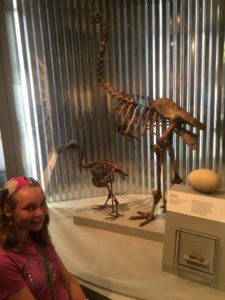 Dannica thinks that dodos are too cute to have gone extinct. 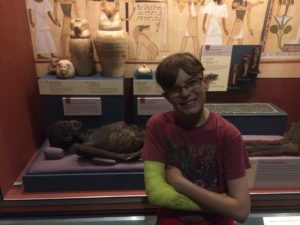 Harrison is ready to start his career as an egyptologist. 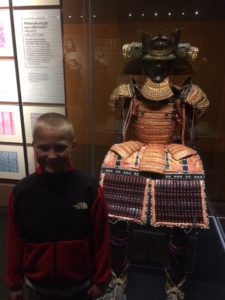 Roger thinks that this suit of armor which was a diplomatic gift to President Teddy Roosevelt would look good on him! 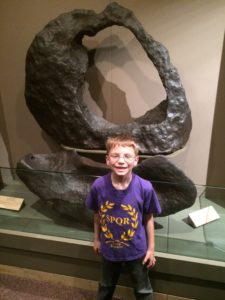 Oliver was impressed by this meteorite, which was bigger than he is. 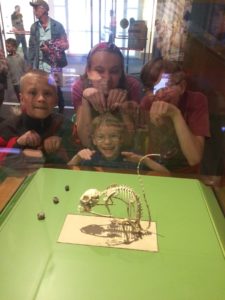 Look familiar?  You should have heard their squeals of joy when they saw Scrat’s skeleton.  As you can see, they identify deeply with that ice-age squirrel.