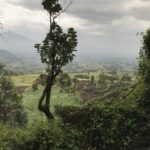 I’ve always loved enjoying the outdoors. Some friends and I decided that we haven’t had enough hiking in our lives recently, so we decided to remedy that with a visit to Volcanoes National Park in Rwanda. We took advantage of the long weekend observed in honor of Martin Luther King, Jr, to fly south and soak up some vitamin N (nature). We set our sights on Mount Bisoke. While there are several options for a guided tour which nearly guarantees a sighting of mountain gorillas, those options are quite pricy, so we planned to just pay for the standard entry fees for the park and to hope for the best. We’ve heard that only about 1% of visitors to the park via this method see gorillas, so it was a long shot, but it was definately in the back of each of our minds.

First, though, we had to make it out of Lagos. We made it through traffic to the airport without incident, unlike our 4+ hour ordeal a few months ago when we were heading to Germany. Then we boarded the flight, and the AC wasn’t working. It was HOT onboard that plane. We all started sweating right away, and resigned ourselves to a sauna as we awaited takeoff, when the engines would spin up and start turning the AC. Unfortunately, some of our fellow passengers were less sanguine about the situation. As we started taxiing, a man was anxiously/angrily pacing up and down the aisle, shouting that he knew there was something wrong with the engines. The flight attendants were unable to molify him, and his anxiety rapidly turned contagious. Dozens of passengers unbuckled, opened the overhead compartments and got their belongings, and then cramed toward the front, pushing around eachother in the aisle as if they were on the roads of Lagos. It. Was. In-Sane. They were shouting for the door to be opened, pounding on the overhead panels, nearly a full blown riot. The plane came to a halt as the crew tried to regain calm, and as the plane baked in the equitoreal sun on the tarmac, it just got less and less comfortable. We were in the row behind the over-wing exit row, and the guy in front of us pulled off the cover of the handle for the exit and started to pull it. Waiting in our seats, hoping that calm would be restored and that we could be on our way. The prospect of having the emergency exit opened (and the attendant delay we assumed that would entail) was the last straw for my friend Brianna, and she shut that down. Finally, we were towed back into the gate, we were all deplaned, and waited to hear if the flight would be rescheduled or if our long weekend was to be cut short before it even started. We waited on the tarmac, then back inside the terminal. After waiting an hour and a half or so inside the terminal, while external cooling equipment was hooked up to the plane, a Rwandair employee tried to get our attention to give an announcement. He tried multiple times, starting (as is expected when addressing a group in Nigeria) with “good afternoon.” The same jerk who started the riot on the plane wouldn’t even let the employee make it past that platitude, shouting him down about how it was not a good afternoon, every time he tried. Finally he gave up on the announcement and gestured to my friends and I, the only “oyibos” on the flight (its still awkward for me every time I’m given deferential treatment here due to the color of my skin), toward the tarmac, and we headed back out, only to wait another 45 minutes or so out there before finally reboarding.

Finally, over 3 hours later, we were on our way. The captain made an announcement that the plane had been pre-cooled, and that it might warm up briefly while we taxied, but assured us that once airborne, the AC would be fully functional. Fortunately, this time, all went as planned. We arrived into Rwanda after midnight, and made our way to our hotel.

We got up the next day, had breakfast, jumped through the hoops to collect our rental car that had been returned from the airport to the lot the day . before due to our late arrival, and then drove about 2 hours north of Kigali to Musanze. We did a short hike up a hill in town for the view, then explored town a bit and grabbed some dinner.

We paid our entry fees and met with the rest of the group which would hike Bisoke with us. The guides told us that we needed to drive to the trailhead, warning us of the “African Massage” we would get from the final bit of the road. They were not wrong. We were very glad to have the high ground clearance 4 wheel drive vehicle we had rented. These pictures really don’t do the roughness of the road justice. Many of the rocks on it were between the size of a softball and a loaf of bread. It was rough!

The hike was challenging, beautiful, and amazing. The trail started at 8100′ elevation at the edge of a small village with fields growing corn and potatoes. It went into the jungle, and up the side of the volcano, with no switchbacks to speak of. It was steep! Even on the way up, the trail was muddy. We hiked through 2 or 3 vegetation zones as we climbed, though they were very different than the pinon/juniper, ponderosa pines, aspens and mixed conifers, etc that I am used to.

At one point about a third of the way up the trail, Constance stopped us and looked intently off into the bushes, then excitedly and quietly called to those of us lucky enough to be nearby.

I couldn’t believe our luck, we saw a family group of mountain gorillas about 25 meters away from us. With my small binoculars that I carry with me when hiking, I could make out all of the detail on their faces. It was truly awesome to see them in the wild. I tried to hold the small camera on my phone to one of the eyepieces of the binoculars, with disappointing results.

We had about 4 different kinds of weather in the half hour or so that we hung out at the summit. We traded trail mix for dried fruit for slices of cheese with our fellow hikers, enjoyed looking across the lake into the Democratic Republic of the Congo, and caught our breaths. Near the summit I saw a bushbuck (a type of antelope), and my iPhone to the eyepiece of the binoculars trick worked better this time.

It started to rain a little bit as we were leaving the summit, which then turned into starting to rain a lot. The trail became an absolute slip-and-slide, and we basically skied down. I didn’t get many photos on the way down as a result, not wanting to ruin my phone.

All in all, it was an amazing hike. The group was large, about 30 people, half of whom were Rwandan, and the remainder were a mix from all over the world, from New Zealand to Belgium to Spain, to the U.S. (by way of Nigeria). That evening we had planned to sleep at a campground on an island in a lake not far from Volcanoes National Park. Unfortunately, we misunderstood the process to get to the campground, and instead just relied on google maps to get us there. Suffice it to say, that didn’t work. We ended up getting directed to a road that got worse and worse, and would best be described as a game trail. We felt like it was hit or miss for a little while as to whether or not we could even get turned around and out of there. It was seriously rugged, and we took full advantage of the low range 4 wheel drive, plus the efforts of an army of children who seemingly materialized out of nowhere and helped us move the largest of the rocks out of the way so we could make our way out of there. We limped our way back to the same hotel we had stayed at in Musanze the night before and settled in. If only we had found this other blog ahead of time, which gives good instructions for how to get to the island. If I go back to Rwanda some day, I’d definitely like to follow up on that, it sounds great.

That night, we went out for dinner again, and we were hemming and hawing about what to order. Most of the dishes were about 4,000 Rwandan Francs, but one local dish was 8,000 or 12,000, for a half or whole chicken, respectively, in peanut sauce with plantains. It sounded good. We ended up ordering that, for the 3 of us. We were all VERY hungry after the day’s exertions, so we weren’t sure if it would be enough food. Our waiter assured us it would be enough, but to be sure we ordered a couple of plates of french fries as well. The fries came out first, 2 enormous heaps of fries, which were pretty good. Then the entree came out, in a cafeteria style tray, which could easily have fed 10.

The next day we decided to go exploring a lava tube. We punched the name of it in to google maps, and trustingly followed its directions. It did send us on a scenic tour through some small villages near Bisoke. Perhaps some branch of the cave was deep under the location at which it told us we had arrived. The entrance, however, was nowhere to be seen. (Detecting a theme yet? it seems google maps is not always so helpful overseas) We did ultimately make our way to it, and enjoyed a guided tour of the cave as well.

That evening we took advantage of our widespread network of colleagues around the world, and called a colleague who had gone through training with one of my friends, and who was posted in Kigali for a restaurant recommendation. We ended up at The Hut which was fantastic. Deep fried artichoke heart fries? Nile perch fish tacos? Yes please.

Our last morning there, we punched in the airport into google maps to catch our morning flight home. Google was 3 for 3 for us, in directing us very close to where we actually wanted to go, in a completely unhelpful manner. We were directed to the back side of the airport, and enjoyed a bumpy dirt road lap all the way around the runway before finally making it in for our flight home. Rwanda was lovely, well worth a weekend jaunt, if one lives close enough for a weekend jaunt there to be realistic, and well worth a longer visit, if one does not. I’d love to go back some day and hike all of the 7 volcanoes in Volcanoes National Park.