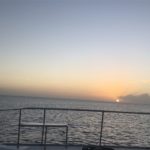 We live a charmed life in which friends and colleagues of ours live in magical places. Often the privilege of living in these beautiful places comes after living somewhere that is a bit of a more struggle to enjoy than others, however much of the time friends and colleagues live in beautiful places because they have great luck. Our friends Sarah and Brianna have been showcased in other posts. Brianna worked with Ben in Lagos. For their next post they would have loved to go somewhere northern and frosty however that wasn’t in the cards and they were sent to beautiful Barbados. Barbados is a small, 166 square mile, island with under 300,000 inhabitants. It was a former sugar cane slave plantation and the place where rum was invented. It is now a tourist paradise located in the Atlantic Ocean just north of Brazil and below the hurricane belt which means the weather is awesome and it avoids most natural disasters common in the Caribbean.

We have been lucky to enjoy so much travel over the last three years, mostly due to the special circumstances of where we were posted. Prior to our move to Nigeria our kids had never left the United States. Once the whole family was reunited in October back in the US we settled in to our new home and life knowing there wouldn’t be much travel on the horizon as Ben couldn’t take any leave during language training. Ben and I really wanted to visit our friends though while they were posted somewhere so warm and tropical. We had been saving our credit card travel points so we decided to use them and the long Presidents Day weekend in February to make our visit. We left a friend in charge of the kids and began our adventure. First stop was Canada. Yep I know, it was a shorter flight at a better time to first travel to Toronto then south to Barbados. Our return trip was through South Carolina which I found puzzling until I learned that South Caroline was settled by Barbadians.

Sarah was lovely and met us at the airport. Customs was a breeze with no visa required, self check kiosks and one quick stamp…only it wasn’t really a stamp we found out, so it is missing from our passports. 🙁 She took us on a quick tour of the island while we went to pick up their toddler form daycare and Brianna from work. Then off to the beach for a delicious fish dinner and sand between our toes. It was great to see them again!

The next day we got to drive around and see more of the island. Traffic wasn’t bad at all and the people were nice and friendly. The houses were so bright and colorful.

Most people take mini-busses for public transportation. There are only two bus stop types to look for. BUS STOP TO CITY or BUS STOP AWAY FROM CITY. Within the main part of the biggest city the bus stops are all named after women.

We had lunch at a lovely farm to table restaurant. Before me you see pulled pork pancakes made smothered with a sugar cane syrup. Unique and delicious. I was able to show off my chicken herding skills to Arthur as I captured escapee chickens and tossed them back over the fence. He was impressed!

Our next stop was a glorious beach full of soft white sand. We rented umbrellas and loungers and they brought us food and drinks. We took turns snorkeling out along a reef. The water was warm and it was a perfect day.

We attended a party that evening and met several people from the embassy. When we walked into the home it was obvious the officer had served in Nigeria. Nigerian art and fabrics everywhere. It is a small world for sure. Ben enjoyed the night participating in a large group conversation in Spanish with people from several Spanish countries. It was good practice.

We were promised the chance to see a monkey, but no such luck this time. It was, however, a lovely walk through the rainforest, and we saw some birds and lizards.

The highlight of the trip was our evening on a catamaran. It cruised along the coast. We stopped at two different ship wrecks to snorkle with the sea turtles and fish. It was so clear and lovely.

Snorkeling was magical! And the water was so warm. I could spend hours there and never be uncomfortable. I can’t wait to go back.

The final morning before going to the airport was spent at a small pool party with the U.S. Ambassador to Barbados. She is a lovely and accomplished woman that just couldn’t get over how young we were and that we had four children. Always comes up, every single parent teacher conference as well.

Magical 3 1/2 days. Well worth the credit card points, and Ben even got to do some “homework” practicing Spanish in a social setting. Win-Win!