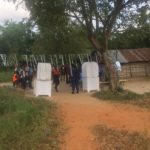 Last weekend I got to go on a trip outside of Lagos.  A group of American and Nigerian employees from the Consulate in Lagos and a group from the Embassy in Abuja flew to nearby Anambra State to do monitoring for the gubernatorial election held on the 18th.  Some people refer to Anambra State as the breadbasket of Nigeria.  As you might infer from that name, agriculture is a big part of the economy there.  As you might also infer, it is considerably more rural than Lagos.  The primary ethnic tribe in the Lagos area is Yoruba.  Anambra State is Igbo land.

Last Thursday we flew from Lagos to Enugu, then loaded into vehicles and drove to Awka, the capitol of Anambra State.  We split into 8 observation teams and spent Friday driving around  the parts of the state to which each of us were assigned, familiarizing ourselves with the area and locating polling units.  Saturday we went out early, and observed all day long.  We drove through little tiny villages, up and down pretty much all the paved roads in our section of the State, and quite a few of the dirt roads as well.  Some roads were definitely better than others. I did feel a little bit like the laundry inside a washing machine as I bounced around the back of a suburban down some of them. How bumpy was it?  Even though I walked very few actual steps on Friday, my watch decided that I had met my 10,000 steps per day goal. 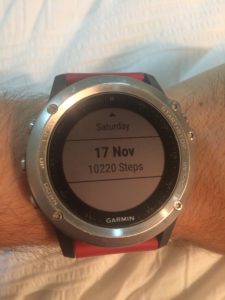 We were essentially following the prime directive during these observations.  Observe and report, but do not interfere or participate.  We were hoping to see a free, fair, credible, nonviolent election, and we were hoping to gain practice and institutional knowledge of how to do observations in anticipation of a much larger observation mission during the February 2019 presidential election.  This is not the forum to discuss the minutiae of what we observed, feel free to talk to me in person about what I saw, but it was a very interesting and professionally rewarding experience for me.  It was great to work with my team, and to see the reports that poured in from the other teams.  We all had some interesting experiences.  It was wonderful to see the passion the election elicited in Nigerian voters.  They were engaged, despite some calls for boycotts by a Biafran separatist organization.  There were no reports of violence.

Each state in Nigeria is divided into Local Government Areas.  For an election, each LGA is split into wards, and then each ward into Polling Units.  There were over 1400 polling units in the LGA we were assigned to, and we were only able to check in on a fraction of them, but at each one we were welcomed and allowed access.  Elections are held on Saturdays in Nigeria.  Each polling unit is operated by a few election officials, often taken from the National Youth Service Corps.  In addition, each of the major political parties, and sometimes some of the minor parties, will have a party agent at each polling unit, to observe things and make sure proper procedures are followed.  They are supposed to observe, but stay back out of the way so they don’t influence voters.  There may be polling units every block or so in cities, or in some of the small villages we visited, several around a town square.  Voters present a voter ID card which has an electronic chip in it, and they have submitted their fingerprints when getting the card.  The cards are scanned in a cardreader, with attached thumbprint scanner.  Once a voter is “accredited” they are given a ballot, which just has a flag for each political party with a candidate in the running, and a blank space next to each party’s flag.  The voter takes the ballot to the voting booth, uses ink to place a thumbprint next to the party of his or her choice, and then deposits the ballot in a ballot box.  As the polls close, the election officials at each polling unit publicly open the ballot boxes, sort the ballots according to the votes cast, and publicly count them, with at least 2 party agents having to certify the results.  Then the results are gathered at collation centers for each ward, and then LGA, and then state.

I really like that they do elections on Saturdays, to make sure that more people will be able to vote, and I liked the public counting of votes.  In many villages, large groups were on hand to watch the counting, counting along for the parties of their preference, and sometimes getting quite raucous.  The organization of each polling unit varied widely, based on the personalities and experience of the NYSC workers operating the units. 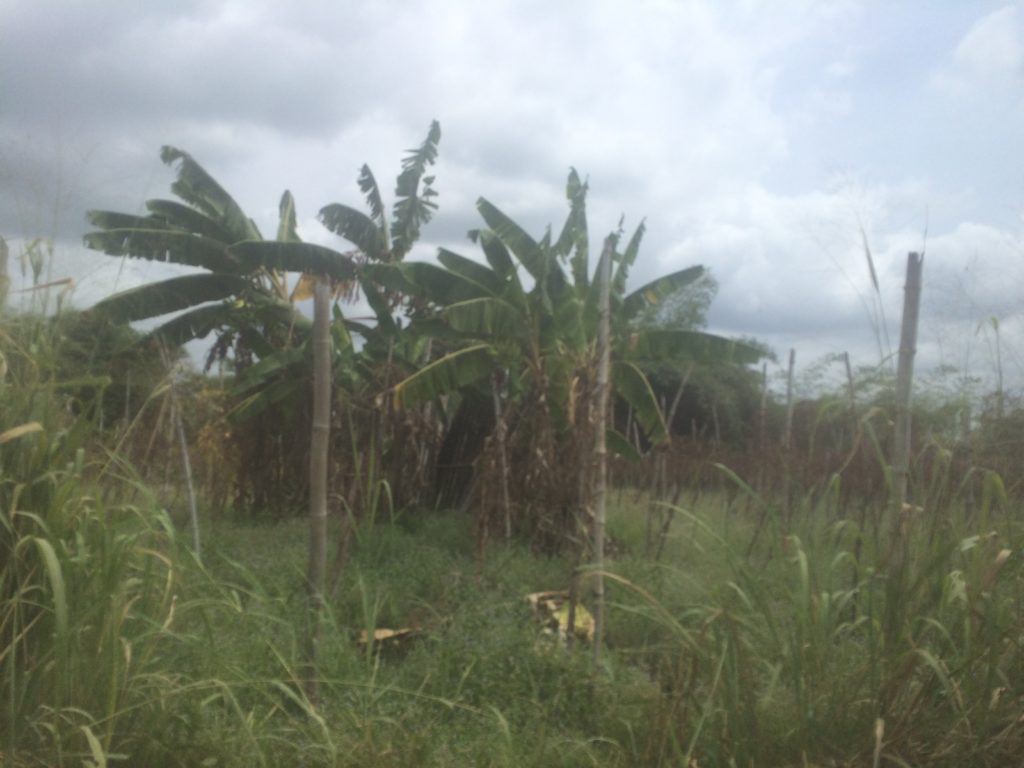 I saw more green in 2 days outside the windows of my suburban than I have in the last 4 months put together, including many banana trees like these.

We drove by many small fields.  None of it appeared to be mechanized farming, and none of it appeared to be irrigated.  The fields tended to be small, one acre or less.  We saw several farmers working in them.  Some yams were being harvested, and some fields were being prepared with hundreds of small hills, perhaps a meter in diameter and a half a meter high, for upcoming planting.   The main 2 crops we saw were cassava and yams, with a fair amount of rice as well. 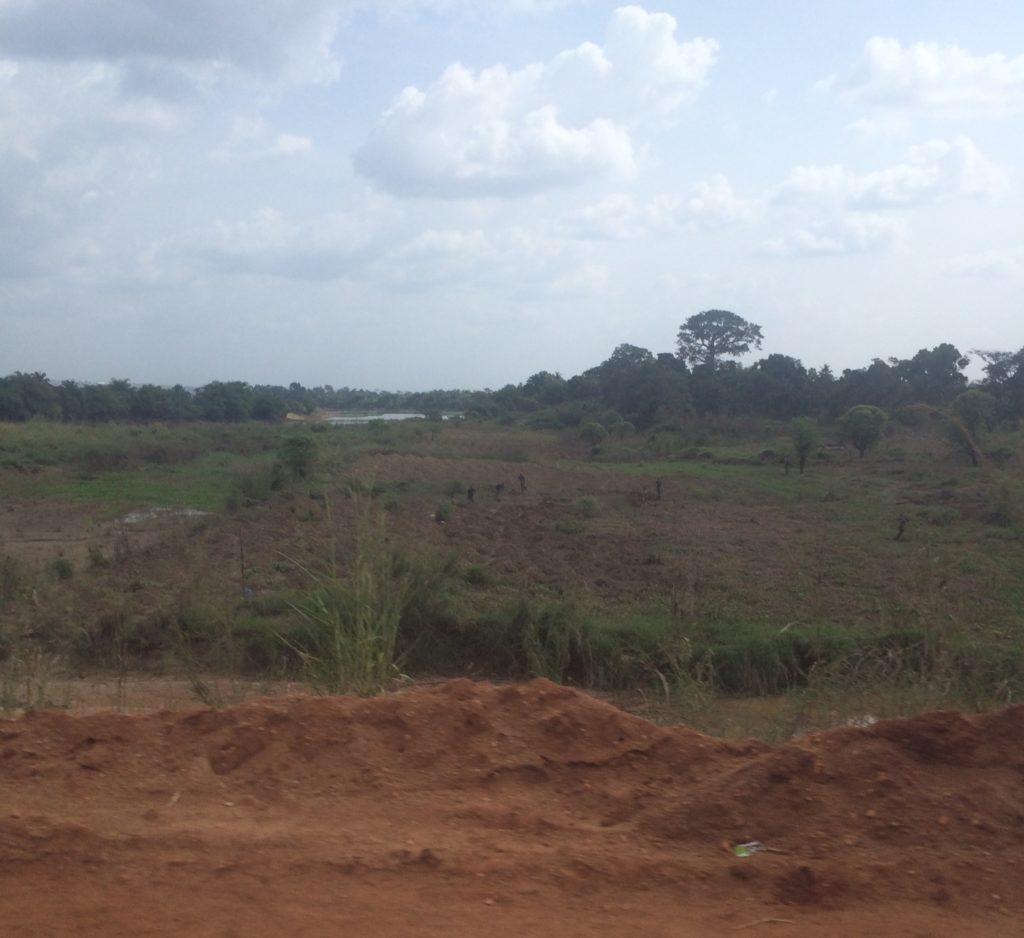 This was one of the larger fields. You can see several men working with hoes to form the hillocks. [click for full size photo] 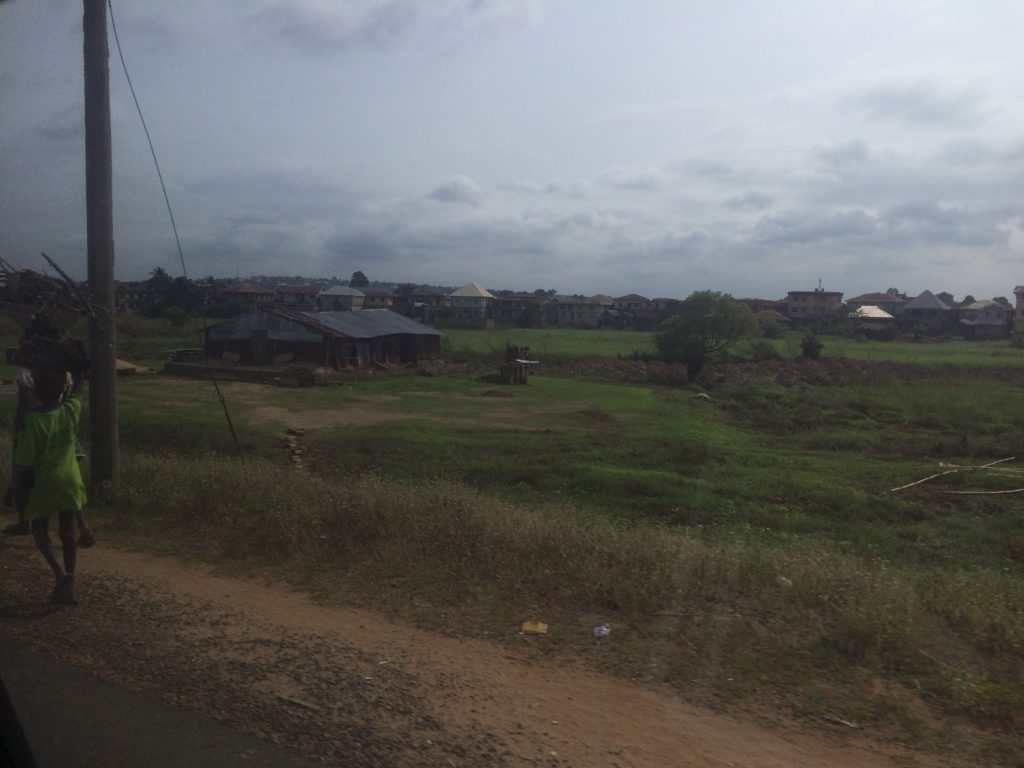 Another field ready to plant, with a village in the background. 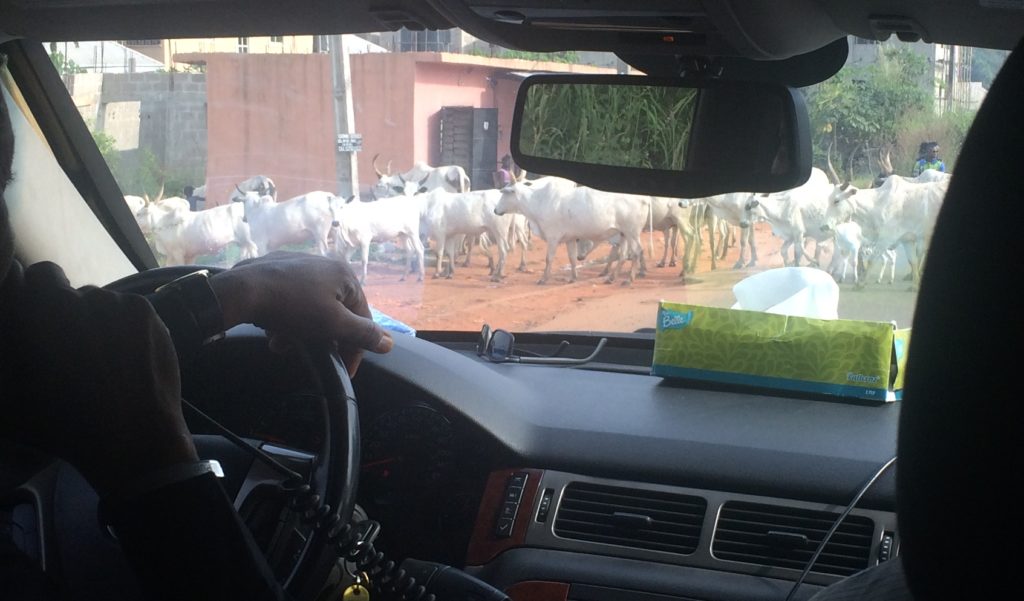 Livestock farming was on display as well, though not as widespread as the horticulture.

We saw many homes which were partially constructed, and clearly had not been worked on in a long time. Evidence of better times a few years ago, when oil prices were higher. Nigeria’s economy is heavily based on petroleum exports, and the fall in oil prices has hit the country hard.

I loved this footbridge which was built to cross a small stream we had to ford in our cars. 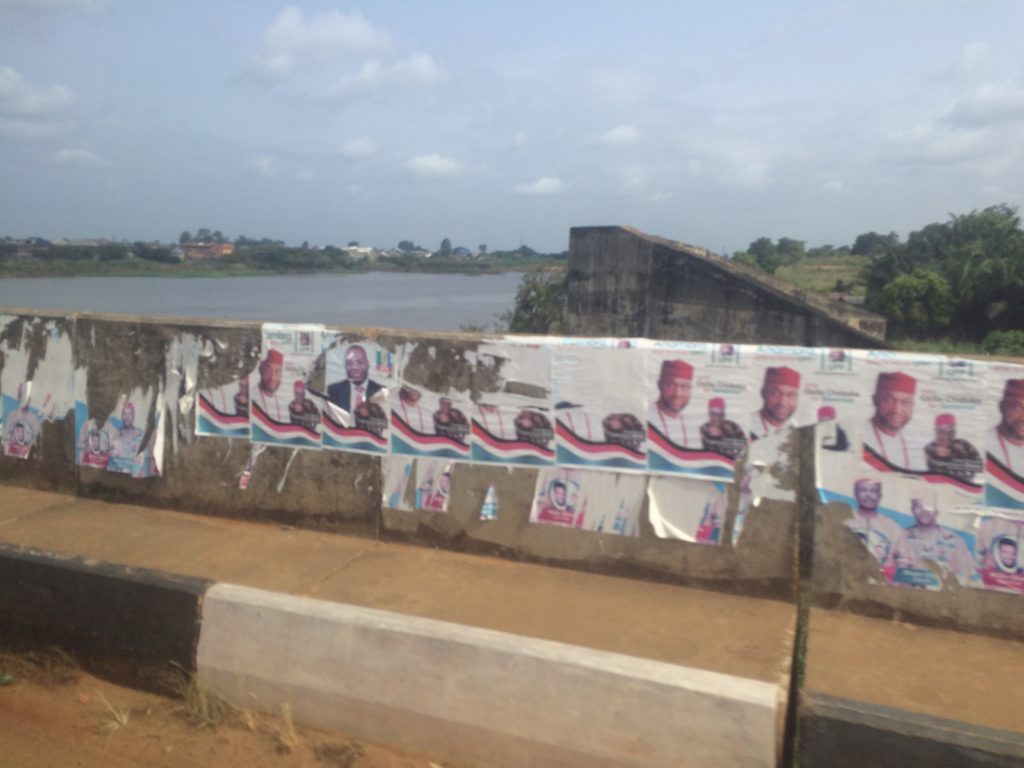 Campaign posters were applied liberally on nearly any surface.

Many polling units were set up at schools like this one. 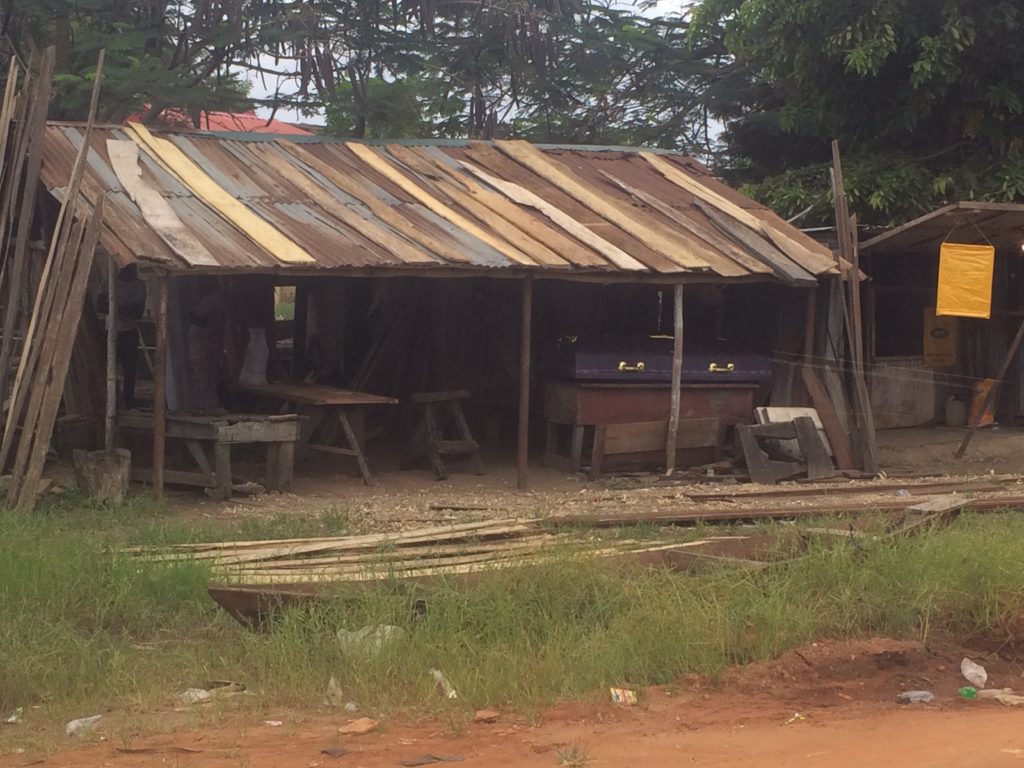 If you find yourself in need of a casket in Nigeria, I know a place… 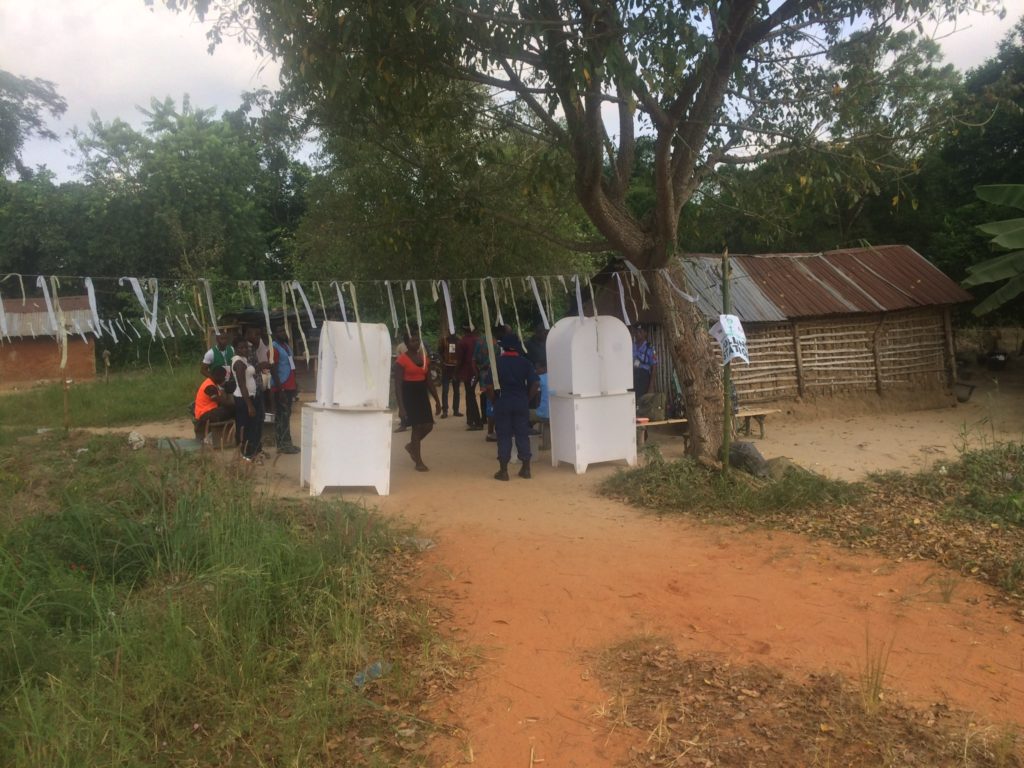 We visited these 2 polling units early in the day as voting was getting started, and then we came back just as they were closing and doing their count.  These were 2 of the more isolated units, along a road, serving a spread out population.

Many more were in villages up under the eaves of buildings, or a few inside town halls. 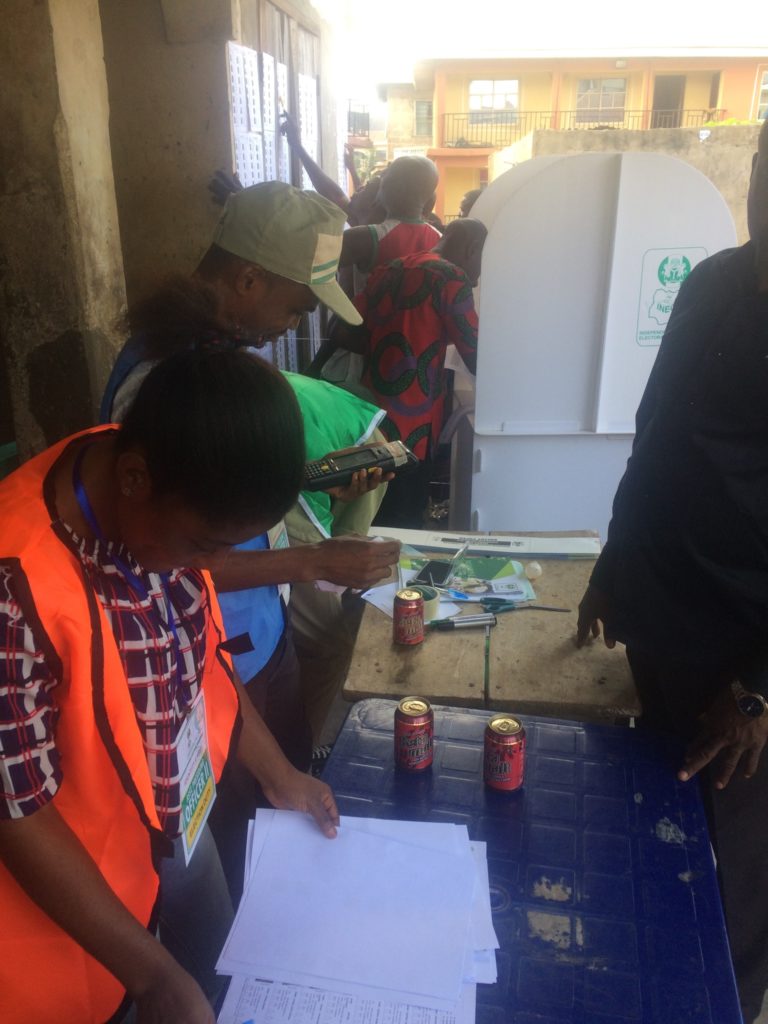 Elections officials accrediting voters, and in the background a voter is in the booth participating in democracy. 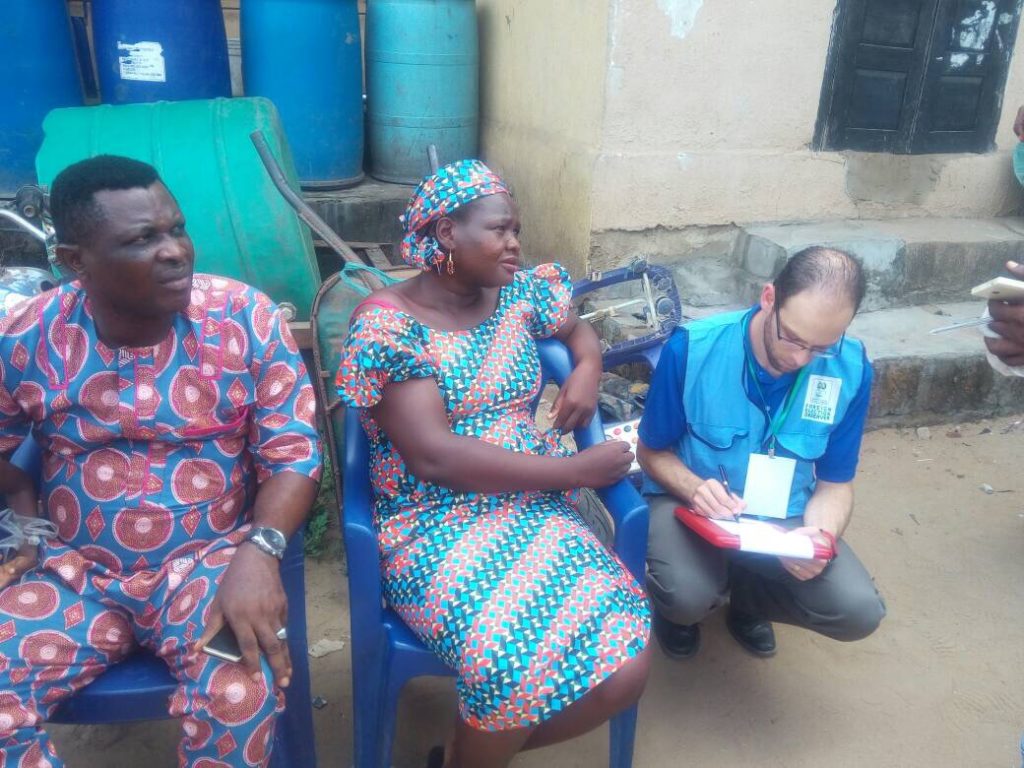 Talking to voters and making notes.  The hair may be getting sparse up top, but I made that “Foreign Observer” vest look good! 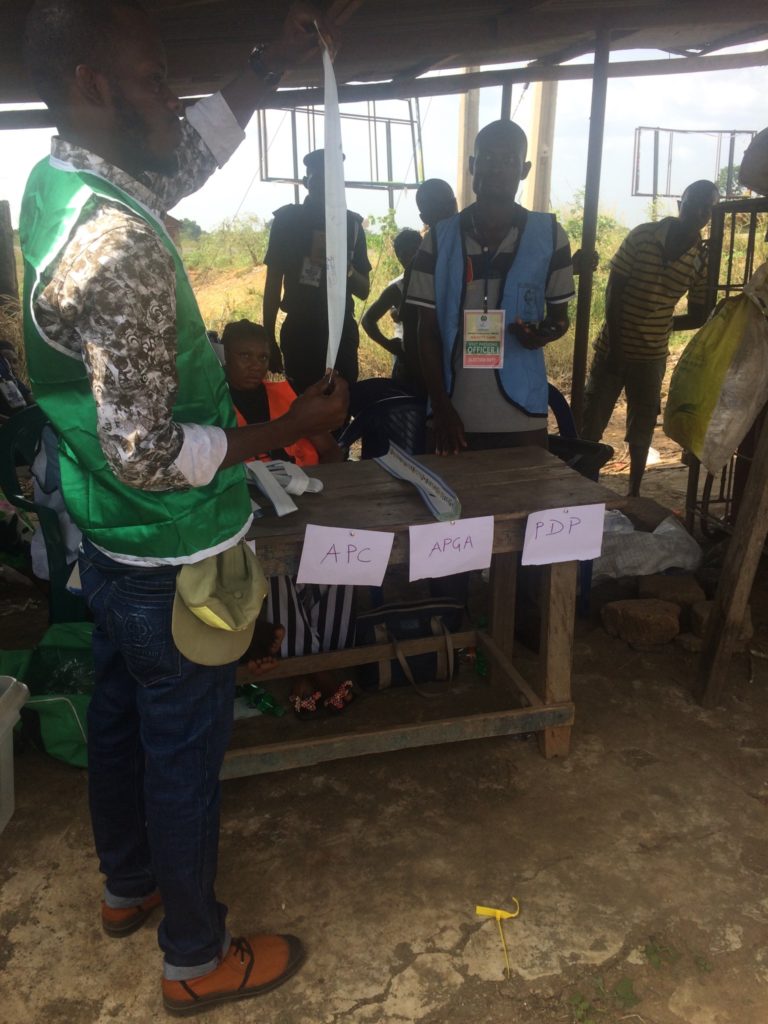 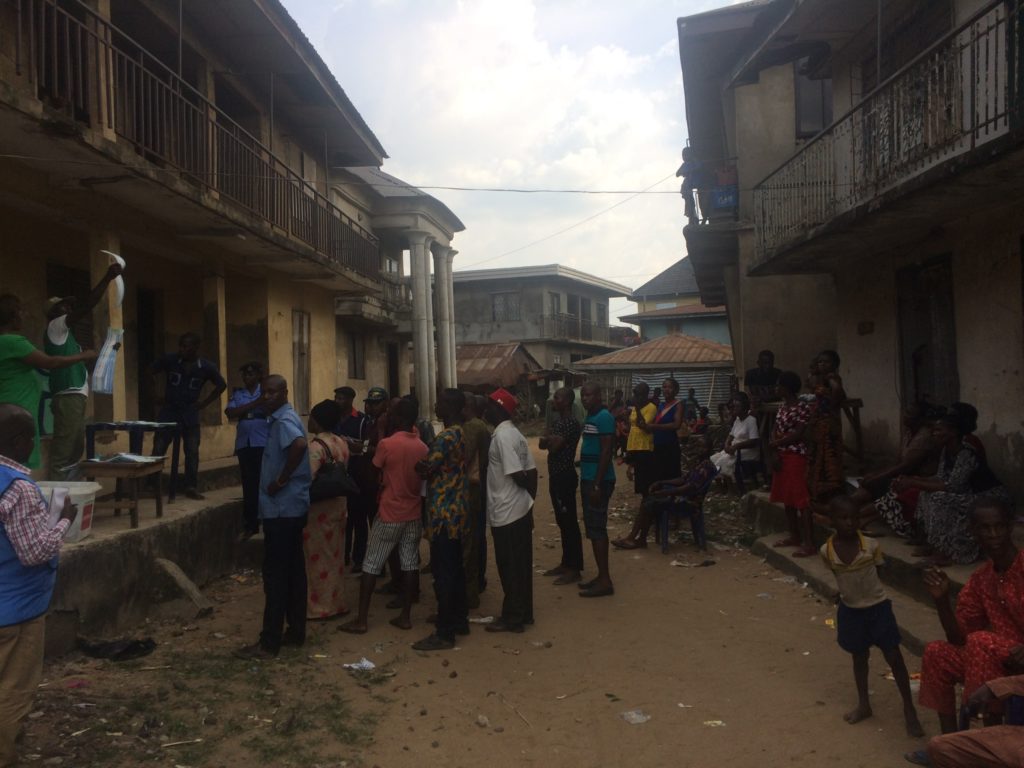 Counting at another polling unit, with the crowd looking on.

It was wonderful to see another aspect of the country that is hosting me, and wonderful to see democracy in action!  There were quite a few ballots cast at the polling unit in the photo immediately above, and the counting took a while.  There was some disagreement between the onlookers and the official doing the count about which ballots were validly voted and which were not.  Some people turned to me to ask me to settle disputes like this at a few polling units, but as I said, we were just observing, not influencing, so I explained that to them and they carried on.  While the count was going on at this unit, I had time to watch the crowd.  The kid on the balcony in the top right of the photo and I made eye contact and he cocked an eyebrow at me briefly.  I answered back in kind, and he shot me a huge smile and a thumbs up.  It was such a cool moment of connection, and just being present in the same moment with another person, despite our very different backgrounds. Moments like that are what diplomacy are all about.

Have I mentioned lately that I love my job?