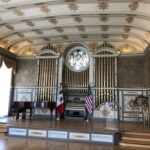 One could not possibly blog about 2020 without discussing COVID-19. I was, of course, closely following the news as COVID-19 became a topic of discussion, particularly as my colleagues who worked in Wuhan evacuated to the U.S. as the outbreak there worsened. As cases started to be identified in the U.S., the Department of State started making some plans for how to manage if they worsened as well. On a Thursday in mid March, we even did a practice work-from-home day in the School of Language Studies at the Foreign Service Institute, on which we all connected with our classes via video chat, to see how well it would work. The next day my class had a field trip planned, and we hoped it wouldn’t be cancelled.

Fortunately for us, that Friday ended up being the last day of in-person class, and we were able to visit the Mexican Cultural Institute in Washington, DC. It is housed in a beautiful building which was designed in 1910 by Nathan Wyeth and George Fuller, who also designed the west wing of the White House. Many of the interior walls are covered with beautiful murals painted by Roberto Cueva del Río, who was a contemporary of Diego Rivera.

The floor-to-ceiling murals depict scenes representing many parts of Mexican history and culture, and they are stunning.

It was really fun! This was the first time that I had an extended interaction with someone all in Spanish, other than in class. The entire roughly 90 minute guided tour was delivered in Spanish, and my classmates and I were even able to ask some questions for clarification. It was a nice checkpoint for us to see our progress.

The whole house was beautiful, and it’s well worth a visit. They also offer tours in English for those who haven’t already spent 4 months studying Spanish as a full-time job.

After the tour we went around the block to a taqueria on 14th street, and practiced some more Spanish between delicious mouthfulls.

That weekend we all received notice that because the teleworking test on Thursday had gone reasonably well and because the infection numbers in the U.S. were steeply on the rise, the class would continue virtually for the foreseeable future.

This, then, is more or less what my work day looked like from the middle of March through a week into June when I finally finished Spanish training. As it happened, they cancelled all in-person testing, so the School of Language Studies had to come up with a new rubric for evaluation by observation during both class and informal assessments, to measure students’ progress.

My office also looked like this much of the time. During the period of social distancing (for more on this, see a coming post), we were particularly grateful we had elected to rent a house during this period of training rather than an apartment. My colleagues looked on with envy at this backyard behind me during our daily 5 hours of video conferencing.

I also spent a lot of time reading in Spanish, and I was more and more excited as I understood enough to read one of my favorite series in Spanish. As I write this post I’m on page 197 of Harry Potter y la Orden del Fénix, book 5 in the series. I find that it’s helpful to read something I’m quite familiar with in English, as it allows me to know what’s happening by context when I encounter words I don’t know in my target language, rather than having to interrupt my reading every few minutes to look something up. Fortunately, this is happening to me less and less!

Class continued much as before, 5 hours per day of video conference with a teacher and small groups of students, lots of reading opinion pieces and newspapers, lots of discussions about politics and political systems, and economics, and endless discussions about el coronavirus. This became a partucularly popular topic for the teachers as we started to learn the subjunctive tense, so that each of us could practice stating what we thought the government/world should do about the pandemic. It was a tiring experience in many ways, and I was anxious to get to post so that I could be doing the “real” work. Between January and June my colleague around the world helped re-patriate over 100,000 U.S. citizens.

I ended up achieving the score that I would need for my onward assignment (3/3 in speaking/reading on the Interagency Language Roundtable scale) at the end of March. However, due to the pandemic the State Department had frozen all official travel, including travel to onward assignments, so I continued in a “graduates” course until June. The 3/3 score theoretically means that I have a “general professional proficiency” with Spanish.

How much Spanish do I speak? Well, we have now been in Spain for a bit more than a month. The day after we arrived I jumped through the bureaucratic hoops to get our cat through customs and released to me. I had to interact with 4 different Spanish government offices including a veterinarian and customs officials, and I was able to do that all in Spanish. I was able to have conversations with my taxi drivers as I went to and from the airport, and between terminals from office to office. I was able to have conversations with truck drivers who were in the waiting room with me to conduct business. I was not even close to able to understand the rapid and colloquial conversation among the truck drivers. Maybe that’s the 4/4 level.