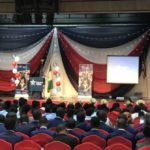 Ok, so I guess we haven’t been so great about this whole “consistency” thing in updating this blog.  Life has been busy, getting everyone home from R&R, starting a new year of school, starting up scouts, play rehearsals, violin lessons, fencing, and all of the other activities that 4 amazing kids are interested in, oh, and doing the job that brought us here in the first place.  Two family members also got a bonus trip in, which I’m sure will be a future post.

For the sake of diving back in, and covering some of the cool things I’ve done in the last few months, lets talk about a day in the life of a consular officer.

Many days in the consular section feel a little like groundhog day, in some ways.  We show up in the morning, we talk to applicants, one day seems much like the next.  Each day there are a few interviews which stand out, a few brief conversations which are cherished moments for me.  Even after 36,000 adjudications, no matter how many times I think I’ve heard it all, something genuinely surprises me almost every day.

Here and there, we are also able to get out from behind the interview window and do other cool diplomat stuff.

One of my colleagues and I got to go to an Undergraduate College Fair and a Graduate College Fair the other day here in Lagos.  EducationUSA is a service provided by the Department of State in 175 countries, giving accurate information to international students about studying in the US.  More than 40 schools sent representatives to Lagos and Abuja (and I believe most of them also visited other countries in Africa).  My colleague and I gave presentations throughout the day about the student visa process.  Ir’s really fun getting to do outreach like this, and hopefully we’re able to give helpful information so that people don’t fall victims to visa touts selling them fake stories for them to tell and fake documents for them to give us, which are “guaranteed” to get the visa approved.

Occasionally I also get to attend “representational events.”  These are events to which a wide variety of people are invited, both Nigerian politicians, leaders, artists, and entrepreneurs, members of other diplomatic missions, and other .   Every year the fanciest and most elaborate representational event held at each US diplomatic mission is our Independence Day event, held on or around the 4th of July.  I missed out on the Lagos event this year while I was on leave, and I’m looking forward to attending it next year.  I did recently get to attend a reception for a newly arrived head of our Public Diplomacy shop, at which this Yoruba group performed.

I’ve also been spending time cross-training in another unit of the consular section.  In the past, in addition to non-immigrant visas (the unit in which I’ve spent 99% of my time), I have been able to do some work in the immigrant visa unit, primarily adjudicating K-1 fiancee visas.  Next week I’ll be starting a rotation in the American Citizen Services unit, and I’ve been training on how to do the work there.  That will be a meaty enough topic to merit its own post in the near future.  There has been lots of other fun stuff too, trivia nights, playing with the newly arrived baby of some of our friends, going to another adult prom (Marine Corps Birthday Ball), and so on.

We got our official cable notifying us of our onward assignment (to follow up on the email we previously received), and Lagos has had an additional R&R added to it, so we’ll get to plan another vacation as well!  Lots of fun coming in the next 11 months before we go.