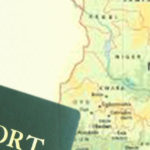 We’ve been here for 6 weeks today, and I feel like we’re falling into a rythym, more or less.  I am spending much less time feeling like I have no idea what I’m doing and asking for help, and more time actually doing the work.  When I first started working “on the line,” adjudicating visa applications, I was able to get through 40 applicants or so in a day.  I would look on at my co-workers doing 120-150 and just shake my head, wondering how I would ever get there.  I remember very clearly, a few weeks ago, my first day that I looked at the report at the end of adjudication and saw 3 digits in the column next to my name!  Granted, we had a couple of people out sick and 1 out packing out her stuff for an upcoming move to her next post, and we spent an hour or more longer on adjudicating than we normally do.  The last week or so though, I’ve been able to average over 100, and I feel like I’m pulling my weight, and starting to keep up with the avalanche of green Nigerian passports in which we are deluged every day.

For now I am almost exclusively working on non-immigrant visas.  I talk to about 100 Nigerians (and an occasional national of other countries) each day, who are seeking tourist visas so they can visit Disney World or family members, so they can see the Statue of Liberty, so they can attend weddings and graduation ceremonies, so they can receive medical treatment (including childbirth), so they can attend trade shows, so they can attend diaspora group events, or so they can purchase equipment or inventory for their businesses from American businesses.  All of those are allowable activities on a B1/B2 visa.  I also talk to many who have been accepted to schools here, all across the country, from community college associates degree students to ivy league Post-Docs.  The vast majority of our applicants fall into those 2 broad categories.  We also get occasinal J visa exchange visitors, R visa religious workers, workers applying for H1B or L visas.  I meet millionaires and paupers, I meet grandmothers and new babies.  I meet Nollywood stars and nuns.  I meet police officers and occasionally people who’s criminal pasts make them ineligible for visas.  I meet household servants and I meet Obas. Yes, really, I have met a legitimate Nigerian Prince.  I meet entrepreneurs of every variety, textiles saleswomen, petroleum distributers, farmers, school proprietors, dredgers, auto importers, caterers, bankers, you name it.  It really is fascinating work, talking to a cross-section of Nigerian society.

We start early in Lagos.  We’re expected to be on the line and interviewing at 7:15, and we interview until all of the day’s applicants have been processed, normally finishing about 11:45.  In the afternoons we do additional work on cases that need more research and work on other projects.  That means the 100 or so interviews I do are done in about 4.5 hours, or about 2.7 minutes per interview.  Many take longer than that, but a few are quicker, and sometimes I may interview a family of 6 all at once, so it all evens out.

As I have been getting up to speed on non-immigrant visas, I’ve started taking on some additional work too.  I’ve been working on outreach, both online and in person, answering questions and trying to dispel some of the persistent urban legends about which fake documents applicants “have to buy” from the predatory visa “agents” who make their living on the anxieties of hopeful travelers.  Today I adjudicated my first applications from Legal Permanent Residents of the US (someone who had immigrated previously and had legal permanent status, but who was not yet a citizen) who had traveled out of the us and lost or had their “green cards” stolen.  There is a consular service for that, we are able to verify their status and issue a travel document to allow them to return home.  I’ve recently been assigned another big project that I’ll talk about at some future point. At some point later in the tour I may get to do a rotation in the immigrant visa section (adjudicating applications for visas allowing legal immigration to the US) or the American Citizen Services section (offering a wide variety of services, including issuing passports and visiting arrested American Citizens). I can see why people have told me that I’ll be getting a great foundation of knowledge for a Consular Officer at this post!

On a non-work related note, we’ve been settling in well too!  The kids are a week into school, and getting excited about their extra-curricular activities.  Wednesday night for me means darts over at the British club, the Kingfisher, and I even got my own set of darts this week.  Thursdays are volleyball and tex-mex night at the GQ, the American club.  We’ve been doing trivia nights semi-regularly with the consulate community.  Dy has been doing yoga and meeting with friends, and she has a book club started.    She volunteers with the British Expats and is helping to match different at home Foreign Service spouses, EFM’s, to various volunteer opportunities in the area. We’ve been warned about culture shock, and that the first few weeks and months are the “honeymoon phase,” to be followed by a much more frustrating phase in dealing with a new culture, but so far, we’re making Nigeria home.